The Adata XPG Gammix S70 is a very fast PCIe 4 NVMe SSD that’s also considerably more affordable than the competition. Alas, in a first for an NVMe SSD—there are some fitment issues due to a massive non-removable, pre-installed heat sink.

The drive inside the massive heat sink is your standard M.2 2280 (22mm wide, 80mm long) SSD using an Innogrit IG5236 controller, and 96-layer, TLC NAND. There’s 1GB of DRAM cache per terabyte of NAND, and about 33 percent of the NAND can be treated as SLC for secondary caching purposes—333GB for the 1TB version and 666GB for the 2TB version I tested. That’s with the drive empty; as it fills up, those amounts will drop.

The XPG Gammix S70 ships attached to a very large heat sink. It’s potentially a nice add, but it can also be in the way, depending on the location and orientation of your M.2 slot. 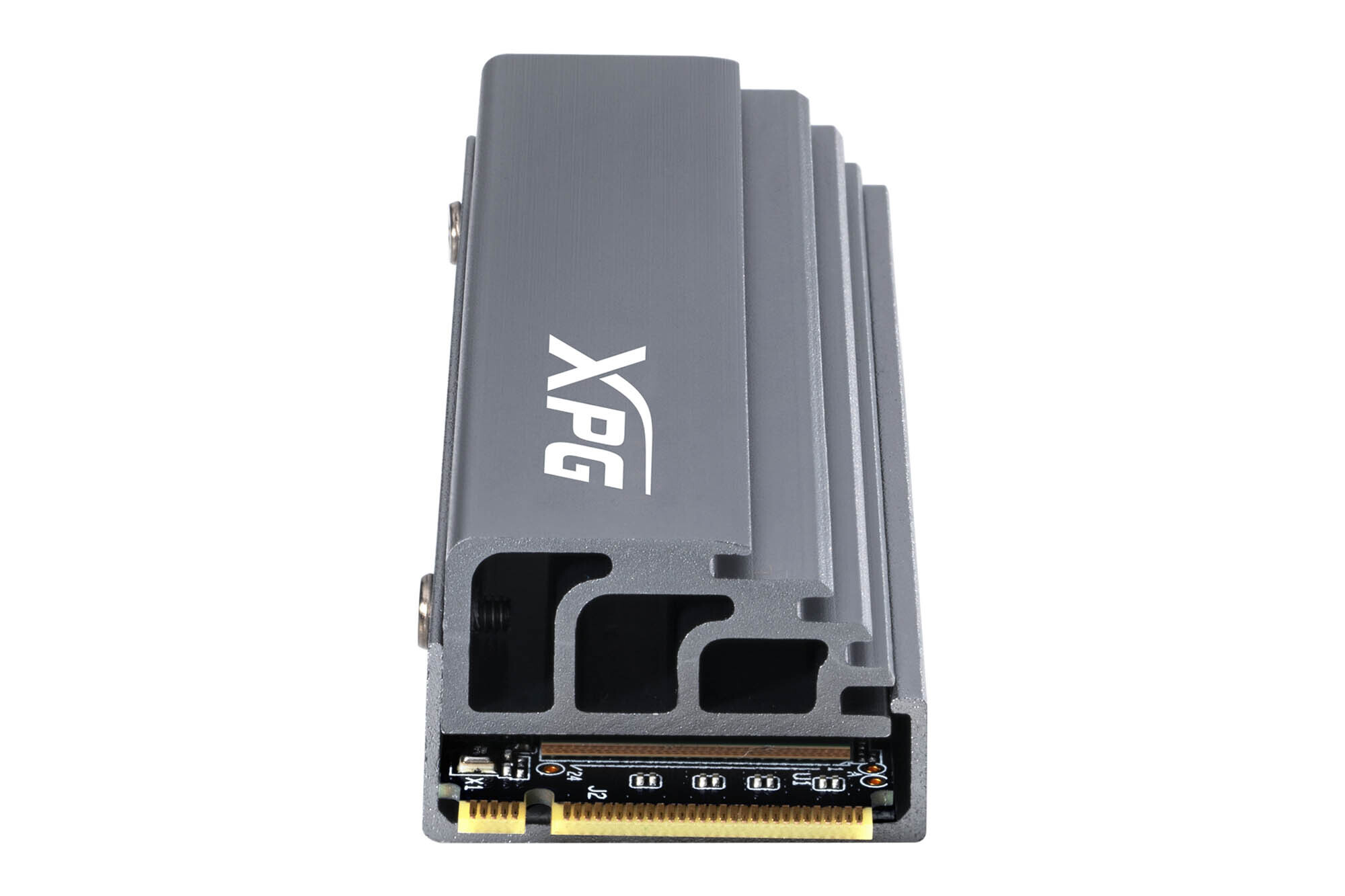 For me it was a colossal pain, as it not only covers the top of the drive, but the edges as well. A quick inquiry to media relations revealed that it might not be wise to pry the drive out, as there’s a risk of breaking it. Sigh.

I had to remove a vertical guide from our Intel X99 testbed to insert it, and had to set the AMD test platform on its back as I couldn’t use the existing heat sinks. According to the company, an XPG Gammix S70 with a different, less daunting heat sink is on its way.

Though Adata caught some flack recently over the XPG 8200 Pro, Adata assured me that this new drive will retain the same components over the life of the product. Except for the heat sink, thankfully.

The XPG Gammix S70 turned in great numbers in the synthetic benchmarks—in many tests, on a par with, or better than, the mighty Samsung 980 Pro and WD Black SN850. As you can see below, it absolutely aced CrystalDiskMark 6’s sequential throughput test. 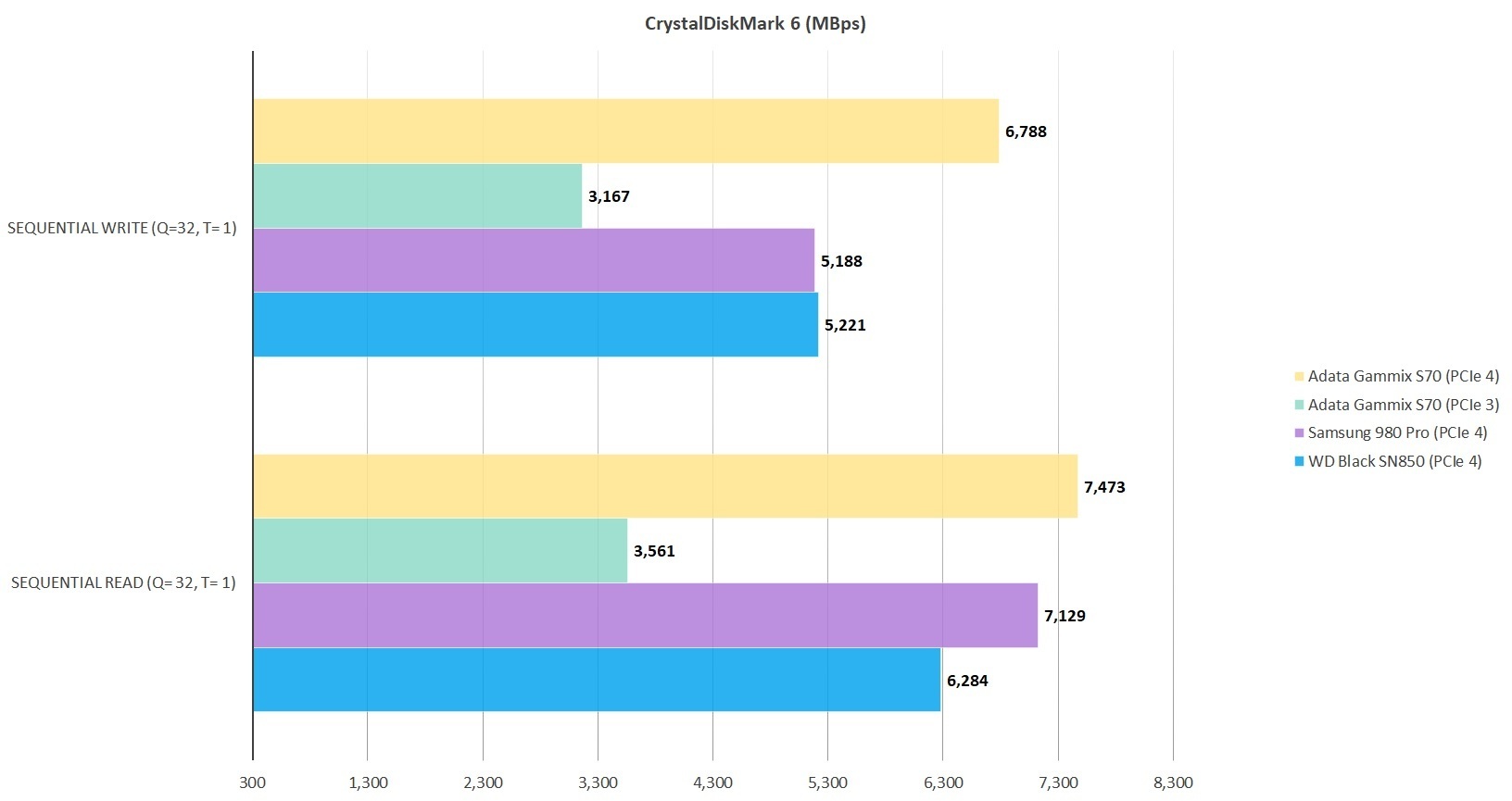 It was also quite good in CrystalDiskMark 6’s 4K tests. 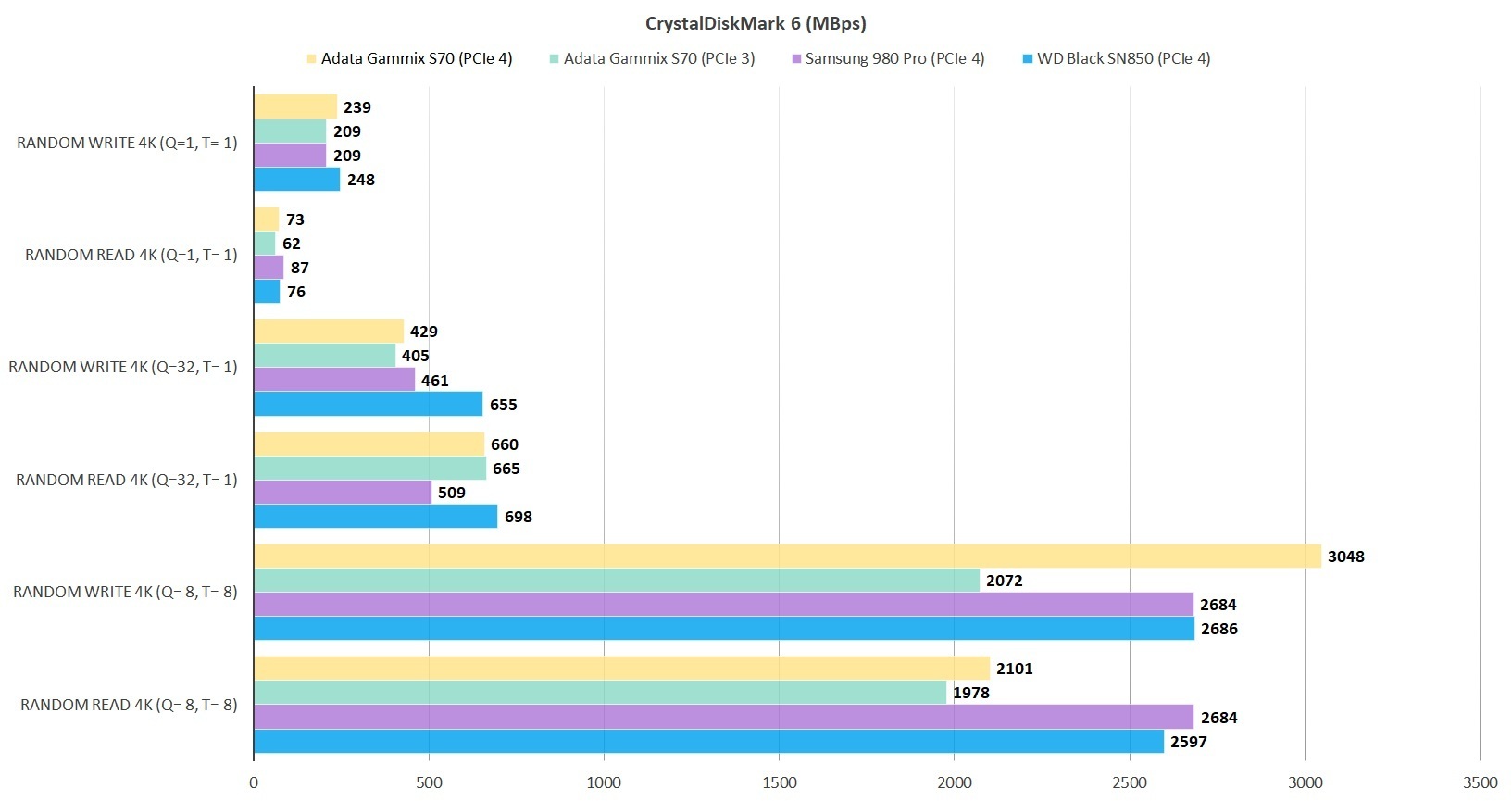 It was only a little less impressive in our real-world 48GB transfer tests, struggling a bit compared to the high-end drives with smaller files and folders. 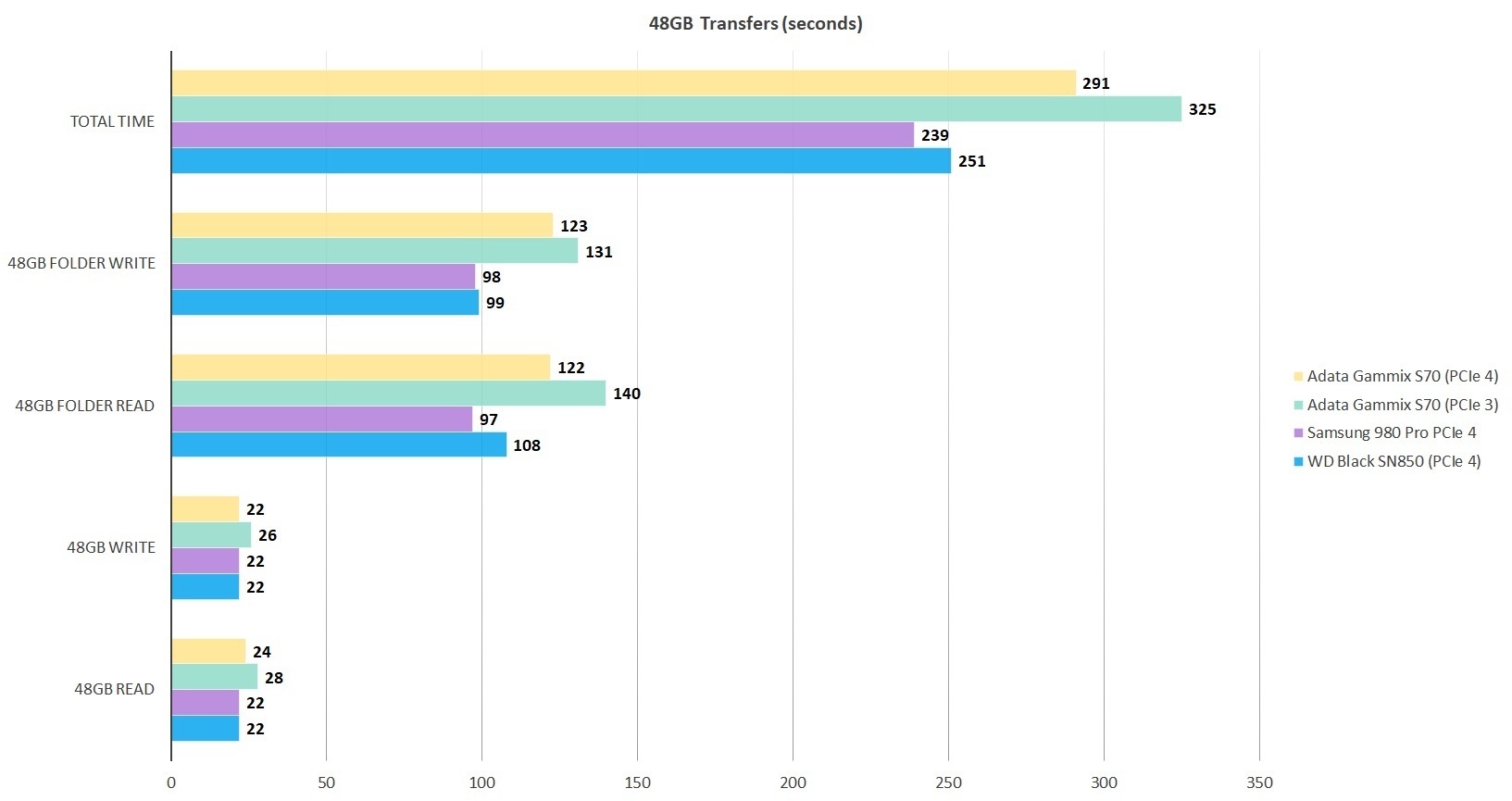 It also didn’t do as well with our 450GB write, though 280 seconds is still a very good time. 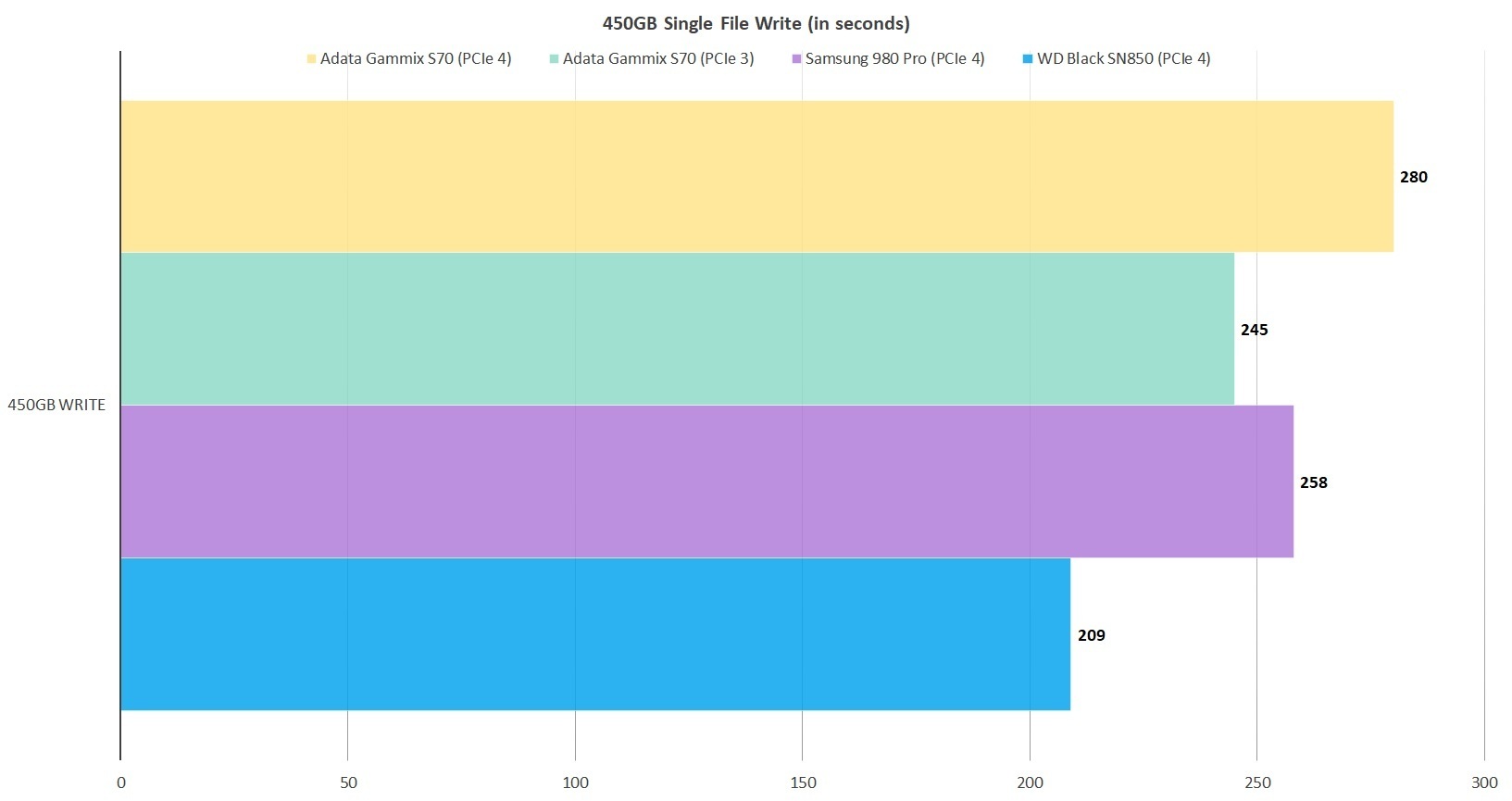 Though the XPG Gammix s70 didn’t quite match the Samsung or WD’s results in overall performance, it is still a very fast drive–far faster than your average bargain-bin, or even mid-range NVMe SSD.

Great, but that heat sink

If the Adata XPG Gammix S70 fits your system now, it’s a winner, delivering top-tier performance for considerably less money than its closest performance peers. But take a careful look at the photos and your M.2 slots to be sure it will fit before buying this version. 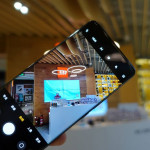 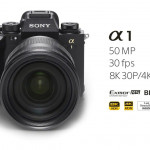 Don't miss a deal at TalkTalk Phone and Broadband
Best offers at Currys
Discounts, Sales and Deals at Argos
Save your money with Vimeo
Online-Shopping with Mobiles
Best products at Farfetch