If you think you need to dig deep into your bank account to get good bass from a pair of truly wireless earbuds, the Anker Soundcore Spirit Dot 2 will rock your world—while also rocking your favorite tunes. These fitness-leaning buds also fit well and can handle as much sweat and raindrops as you can throw at them, all while costing considerably less than a hundred bucks. Such a pleasant price doesn’t come without sacrifices, but they’re relatively minor. The Spirit Dot 2 usually deliver when it counts.

The case is a compact thing that easily slips in a pocket (although Anker could have made it smaller), and there is a admirable novelty to how its lid slides back rather than flipping open. This design may be a little too nifty for its own good, though, as a mere week of continual use found the lid threatening to slide open without prompting. Fortunately, the magnetic strips that charge the buds in the case cling to the earpieces like a vice, so there’s a good chance the buds will stay put. 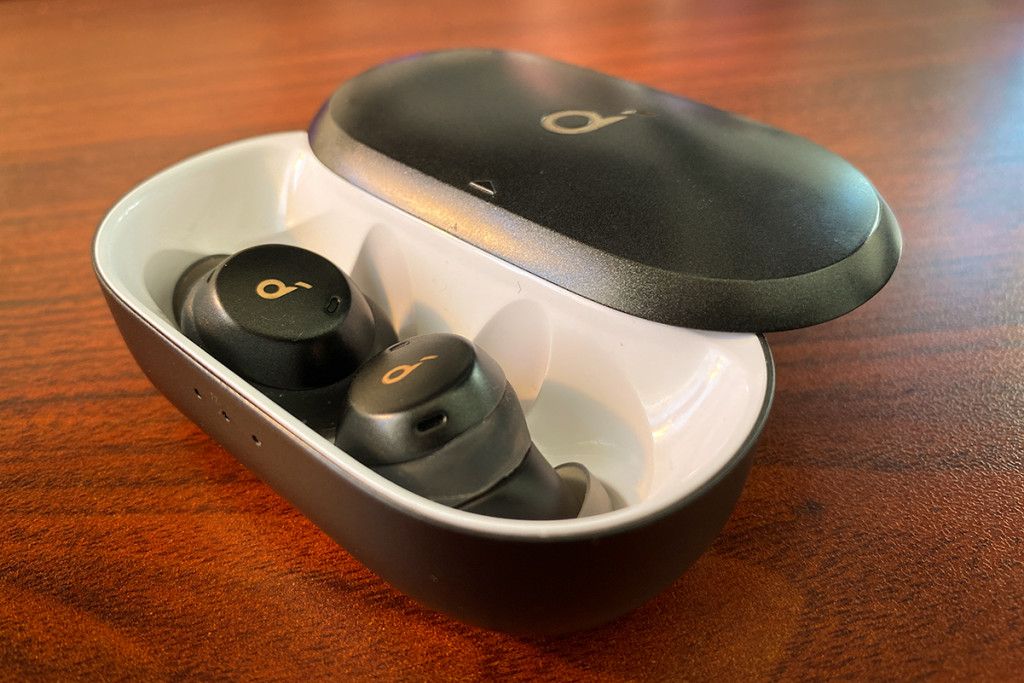 The case also allows for around 15 extra hours of playtime, which makes up for the disappointing five hours of playtime from the buds themselves. The case doesn’t support wireless charging, but it does come with a cable for plugging into the sealed USB-C port on the back; three lights across the front let you know how much juice is left. Pairing is simple if a tad unintuitive: Once you’ve opened your phone or computer’s Bluetooth menu, you need to pull both buds out of the case before the pairing prompt pops up.

The slim and subtly stylish buds themselves fit almost as comfortably in my ears as they fit in their case. They’re relatively small, too. If you look at a person who’s wearing them head-on, you’ll barely notice them at all, and I like that I can pull off my shirt without the fabric getting caught on them. The Spirit Dot 2 might not have active noise canceling, but they seal the ears and muffle exterior sounds so well that it would be nice if they had the increasingly common “ambient” mode that uses the mic to pull in sounds from your environs.

If you don’t get such a great fit right out of the box, there’s an excellent chance you can remedy that with the five different ear tips and three hollow fins that come with the Spirit Dot 2. These are made with what Anker calls “SweatGuard” technology, which help improve the seal and prevents your personal grime from corroding the tech. 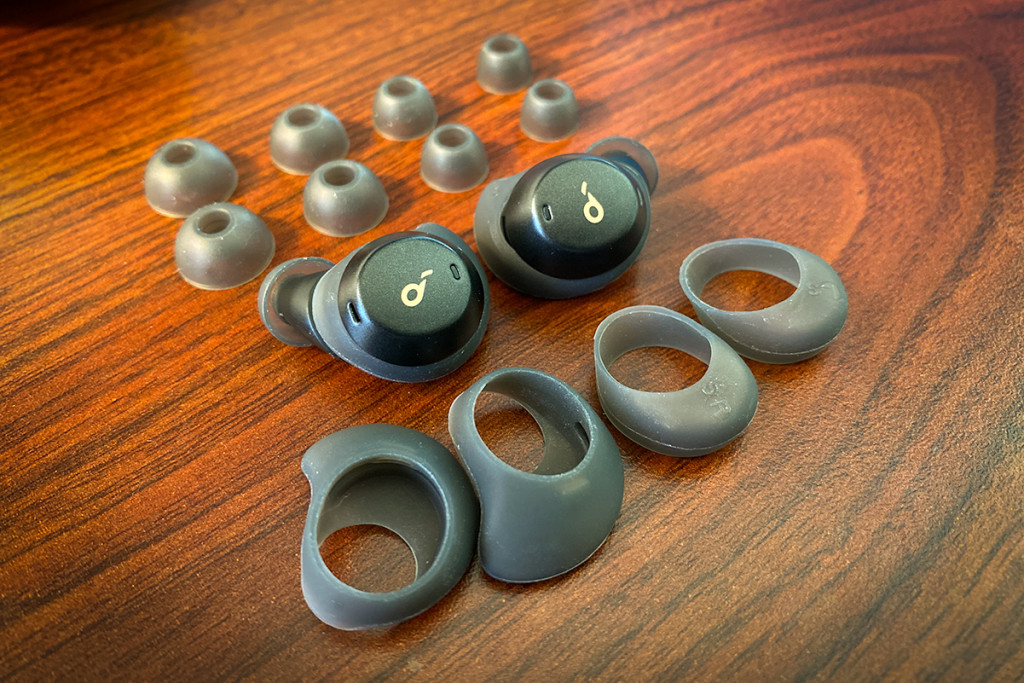 The SweatGuard tech is nice, but fortunately the Spirit Dot 2 boast an iPX7 rating, which means they’re not in much danger from your perspiration in the first place. While it’s not advisable, you should be able to dunk these in a meter of water for half an hour and they’ll come out fine. This makes them ideal companions for the gym, especially since that excellent fit kept them from popping out of my ears even on a lengthy jog.

But it’s the limitations of the touch controls that leave me hesitant to bring them along as companions for much else. There aren’t any one-tap gestures: Instead, you tap twice on the right earbud to play or pause the music and you also use two taps to answer or end calls. Unfortunately, there’s no way to hope back to the previous song on a playlist, but you can skip forward by tapping twice on the left bud. Activating Siri or Google Assistant is easy enough, as you just need to hold down your finger on either bud for roughly two seconds—but this is also what you do to reject a call or transfer between calls. It’s not very intuitive.

And that’s about it, really, aside from one potential annoyance: Unlike many other buds, the Spirit Dot 2 don’t turn off automatically when you take them out of your ears. In theory, at least, they’ll disconnect when you lay them back on the charging strips in the case. In practice, one of the SweatGuard fins would often slip a little and cover the charging surface when I pulled the buds out of my ear. That meant that, unknown to me, the stowed bud kept playing music and draining its battery inside the case for hours, and I’d only find out when trying to figure out why sound wasn’t coming from my phone (because the buds were still connected). Switching to one of the other fins seems to have fixed the problem—and I also learned to look out for the white lights on the buds that signify that they’re charging—but it’s something to keep in mind. Alternatively, you can turn off each bud by pressing down on the sides for eight seconds—which also means you can easily listen to one bud at a time—but they still won’t charge if you don’t line them up properly.

So how good is that bass? The box claims it’s “epic,” and while I wouldn’t go that far, it’s pretty damned good. When I fired up Eminem’s bass-heavy “Without You” and cranked up the volume, I actually winced.

As you might expect from such a pair of affordable bass-focused earbuds, the lows come through stronger than the highs in virtually all tracks, but the highs aren’t terrible, and tracks like Jazz Cartier’s “Tempted” still play much as the artist intended. These are especially ideal buds for lovers of genres like hip-hop and house, but they were also fine for a wide assortment of tracks like The Rolling Stones’ “Sweet Virginia,” Sufjan’s Stevens’ “Casimir Pulaski Day,” and even the Vienna Philharmonic Orchestra’s recording of Beethoven’s Fifth Symphony.

Just be sure you’re ready to devote yourself to that bass: It’s always there. You’re stuck with the EQ settings Anker gives you, as the Spirit Dot 2 buds don’t work with Anker’s app.

These are liveable limitations for such a low price. These are a great option for true wireless earbuds if you’re on a budget, of course, but it also means they make a great backup pair if you have the cash to throw around. With earbuds like these, you won’t be out of much if you lose them at the gym or on trips as you would with buds with fancier features like active noise cancellation and better touch controls.

The Spirit Dot 2 may only cost $80, with that price you’re getting deeply resonant bass, a waterproof build, and a stylishly understated design. That’s a rare combination to find in so affordable a package, and the price makes it easier to overlook shortcomings like their middling battery life, somewhat fiddly controls, and a charging case of questionable durability.

Anker’s new waterproof true wireless earbuds boast a great bass-heavy listening experience at an affordable price that makes up for their lack of more robust features. 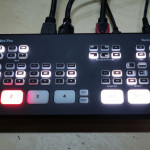 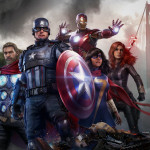 The 'Marvel's Avengers' beta will let you earn 'Fortnite' swag

Don't miss a deal at Farfetch
Best offers at Adobe
Discounts, Sales and Deals at Ancestry
Save your money with Surfdome
Online-Shopping with John Lewis
Best products at House of Fraser