It’s expensive, and Asus could do more to help new users get started, but there’s no doubt that the Rapture router provides leading-edge wifi performance for hard-core gamers. Its tri-band Wi-Fi 6 support combines impressive speed with useful networking controls that can help gamers to minimize lag for their favourite online games. Just be prepared to roll up your sleeves and spend some time delving into the long manual and dense web browser interface.

Asus makes a wide range of routers and mesh networking systems designed for home users, but it also owns the separate RoG brand – Republic Of Gamers – that specializes in high-performance gaming PCs and graphics cards, as well as a range of routers that focus on high-end performance for really dedicated gamers.

The Rapture GT-AX1100 is Asus’ top-of-the-range router for gamers, although it’s also aimed at people who need to run servers, or simply have a house full of the latest smart gadgets.

Unsurprisingly, the Rapture’s high-end performance and tri-band networking come with a high-end price, at £380/$450/AU$700. But, to be fair, that’s not out of line with similar tri-band routers that support the new Wi-Fi 6 standard (aka 802.11ax). 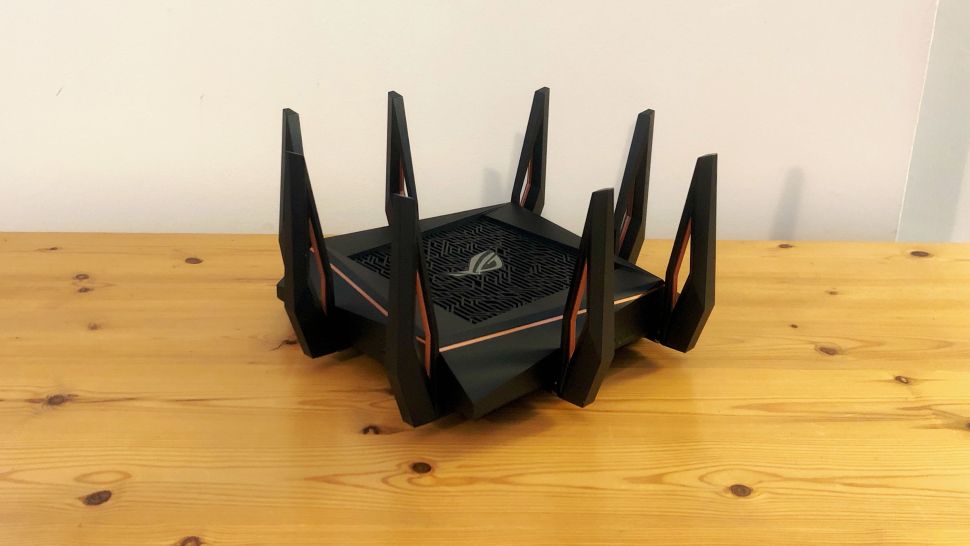 One look at the Asus Rapture GT-AX1100 tells you that it means business. Even before you attach the eight separate antennae, the bulky square router with its sharp, angular edges looks like something out of Battlestar Galactica. It measures 250mm wide and deep, and with all those antennae poking up into the air it stands 180mm high, so this is a router that will need plenty of room to get set-up properly.

It packs some serious networking power, though, boasting tri-band Wi-Fi 6 with a top speed of 11000Mbps (11Gbps). The tri-band router also sets up three separate networks, with two networks on the 5GHz bands, and one on 2.4GHz, with the option of assigning one of those bands as a dedicated gaming network that takes priority over the other bands for maximum performance.

The router also supports Asus’ AiMesh technology for mesh networking, so you have the option of using it with other Asus routers to create a more extensive network if you ever move to a larger home or office. 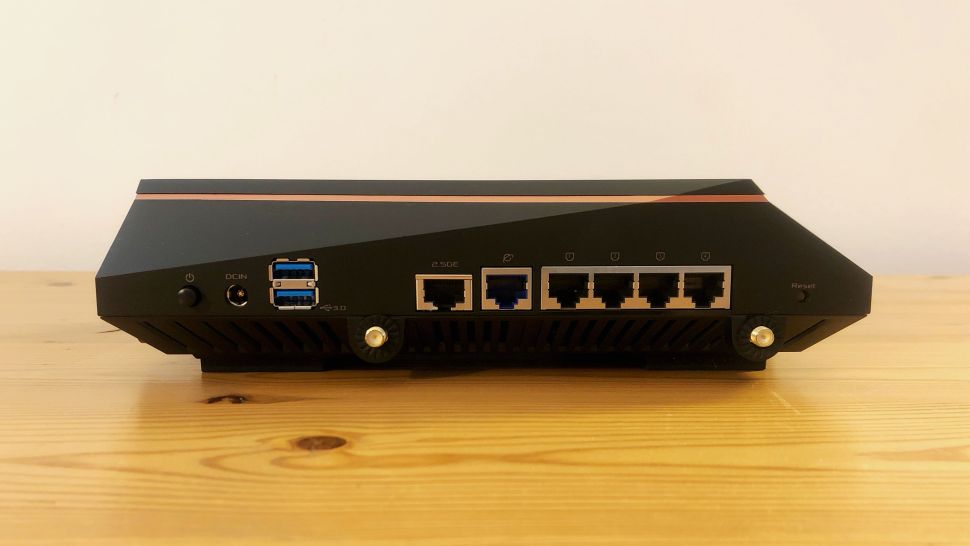 And, for really hard-core gamers, there’s also a ‘Multi-Gig’ Ethernet port that supports speeds of up to 2.5 Gigabits for super-fast Internet access, or setting up your own gaming LAN at home. The Rapture also includes two USB 3.0 ports, which will allow you to share a printer or USB storage device on your home network. 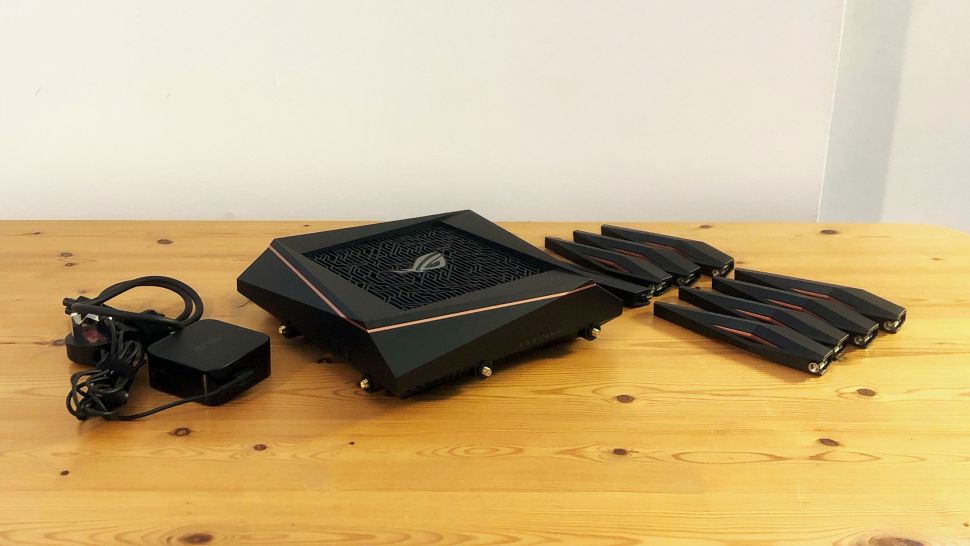 Getting started with the Rapture is not for the faint-hearted. The router’s Quick Start guide doesn’t mention an iOS or Android app that can help you to set the router up properly – it simply tells you to use either an Ethernet or Wi-Fi connection to connect to the router so that you can configure the network through the router’s web browser interface.

That might be fine for hard-core gamers who are used to configuring routers via a browser interface, but it’s not at all user-friendly for the rest of us. Fortunately, once we’d used the web browser interface to set the router up, we did find that we were able to view the router and most of the basic network settings using the standard Asus Router app that is provided for Asus’ more conventional domestic routers.

That allowed us to use features such as the guest network, and parental controls for creating a schedule to limit online time for younger children. 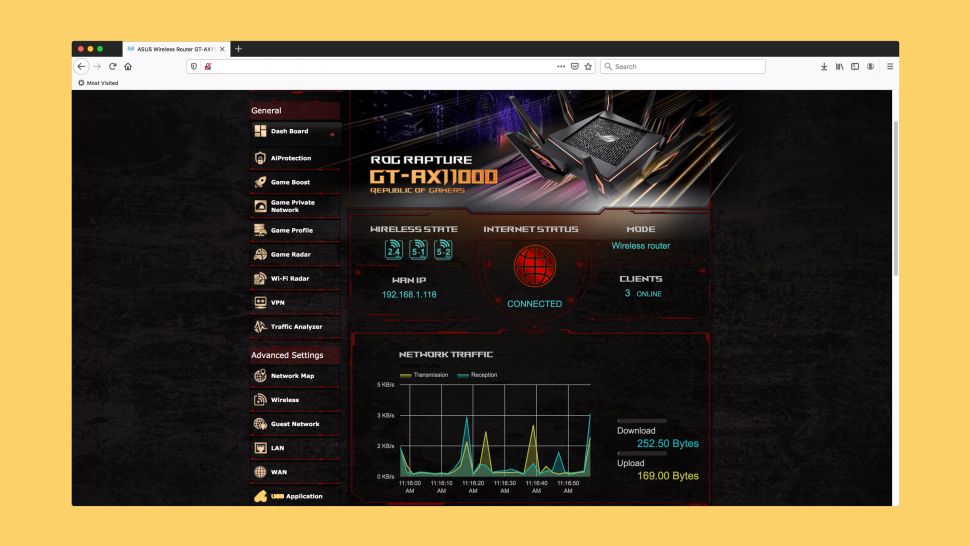 However, getting to grips with advanced features such as the ‘Gamers Private Network’, which is designed to reduce lag when playing online games, does still require you to delve into the dense and poorly explained web browser interface.

Matters aren’t helped much by Asus’ manual either – which is over 100 pages long and buried in the support section of Asus’ web site, and which makes the common mistake of simply listing features without really explaining how they work.

But, if you can cope with the set-up process, the Rapture really delivers the goods with its high-speed wifi. Devices in the same room as the Rapture were actually able to nudge our normal 100Mbps broadband connection up to a full 110Mbps on both 2.4GHz and 5.0GHz bands, with Steam downloads also rock-steady at 12.5MB/s.

Moving further away to our back office did show a slight drop in performance, but still produced strong results with 73Mbps on the 2.4GHz band and impressive 100Mbps on 5.0GHz. 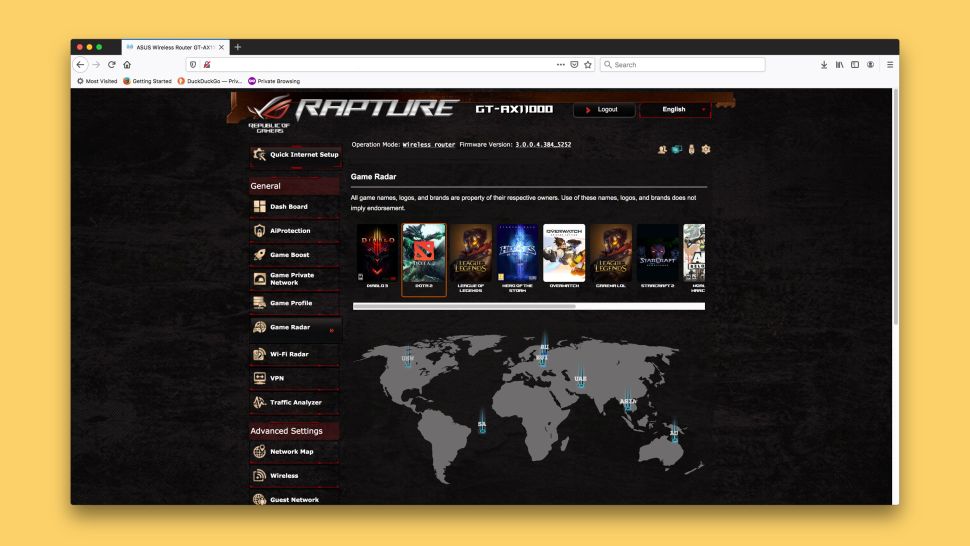 Steam downloads held up strongly too, sticking at 12.5MB/s on 5.0GHz and only dropping slightly to 10.5MB/s with the 2.4GHz band. And, with features such as the ‘Game Radar’ in the browser interface, which allows you to monitor the performance of online servers for your favourite games, you really can fine-tune your gaming set-up to give you the best possible performance.

It’s a shame that Asus doesn’t provide more help with the initial set-up process – after all, not all gamers are networking gurus – but if you need top performance for online gaming then the Asus Rapture GT-AX11000 is hard to beat. 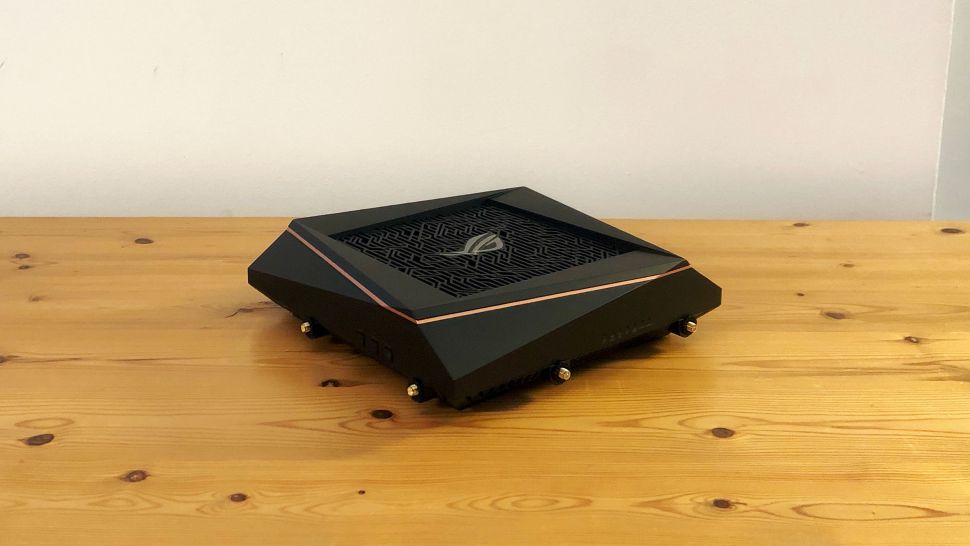 As well as providing top-of-the-range speeds and support for the new Wi-Fi 6, the Rapture router also includes a number of features that are specifically aimed at gaming, such as the ability to monitor performance of online servers for your favorite games.

A Wi-Fi 6 router such as the Rapture is still backward-compatible with existing devices that use 802.11ac wifi. However, you really need bang up-to-date devices that use Wi-Fi 6 to get the 11Gbps speed that you’re paying for.

You’ve got money to burn

Domestic broadband services rarely get above 100Mbps – especially here in the UK – so few people will really need a top-of-the-range router such as this. There are plenty of less expensive routers that will do the trick for half the price.

The Rapture may be fast, but it’s not particularly user-friendly, with a complex web browser interface and 140-page manual that really aren’t designed for beginners. Asus’ more conventional routers have a simple app to help you get started.

You’re not that serious about gaming

Casual gaming and Netflix streaming really don’t need micro-second precision, so there’s no need to spend a fortune on a high-end router like this – especially if most of your PCs and mobile devices are still using the existing 802.11ac version of Wi-Fi.

You’re on a budget

The Rapture’s price tag makes it one of the most expensive routers currently available. Even if you’re a keen gamer, the RoG brand still has a number of less expensive router that are ideal for some online fragging action. 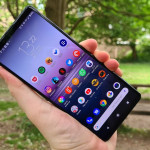 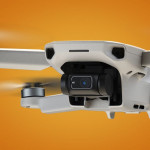 DJI ban: what it means for drone fans and the future of DJI

Don't miss a deal at Sephora
Best offers at Ancestry
Discounts, Sales and Deals at Argos
Save your money with Udemy
Online-Shopping with Bodybuilding
Best products at Go Daddy