Garmin Forerunner 235 review: Now with £40 off in Amazon’s end-of-summer sale

Room for improvement – but now with sizeable savings to be had

Somehow, Garmin has managed to carve itself a reputation as the first and last word in running watches. The Forerunner 235, confusingly, is an example of both why that reputation is richly deserved and why the company is there for the taking with the right device.

Feature-rich but frustratingly inaccurate at times, my month spent with the Forerunner 235 has been a mixed one. This should be my favourite running watch to date, and yet my wrist has longed for the simpler time when the Polar M430 was my Saturday morning partner at Parkrun.

Looks-wise, the Forerunner 235 does a good job of juggling the demands of fitness tracker and regular watch. That is to say, it combines a decent-sized 1.77in screen into a circular frame. It’s chunky and definitely more running watch than fashion item but this isn’t like walking around the office with a Polar M430 or TomTom Spark 3 on your wrist: it just about passes the dress-up test.

It isn’t a touchscreen device, instead providing five buttons to navigate through the various menus. If you’ve ever tried using a touchscreen with sweaty hands, you’ll know this is a sensible move in a running watch, although five buttons does feel a bit like overkill. I’ve quite comfortably used running watches that get away with two or fewer. 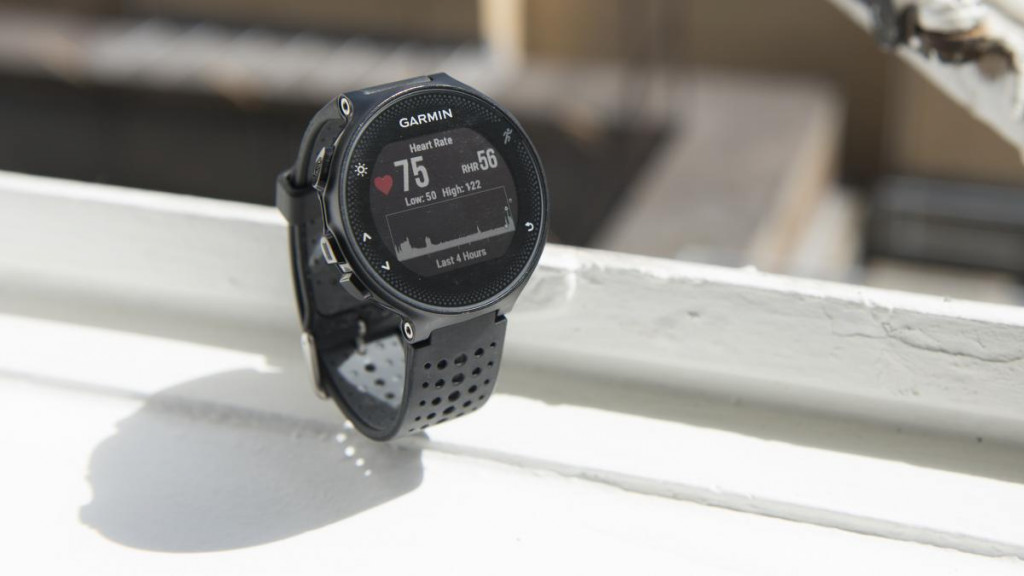 The screen is technically a colour one but it uses colour so sparingly that it may as well be black and white. As a result, the battery life is pretty decent, running to well over a week even if you use the onboard GPS a bit, which is just as well, as it has a bulldog-clip style bespoke charger that you’re unlikely to find lying around if you need to top up the charge in a pinch.

In general, it’s pretty good, but there are moments where it’s too clever for its own good. Take the way it sets the time, for example: in short, you don’t need to – it figures it out via your GPS location. On paper, that sounds ideal – one less thing to worry about when you go on holiday. However, to get it to lock on, you need to start a running activity, and that means having a clear view of the sky. Suffice it to say, most airports don’t offer this and being able to manually change the time easily would have been really handy as I was two hours behind in Greece for a couple of hours before it finally got a satellite lock.

That’s a minor quibble, of course, and mostly the watch delivers an excellent running experience. Unlike cheaper wearables, which offer a set number of stats across a selection of screens, the Garmin Forerunner 235 offers a dizzying array of options as to how you display your data. You can set up to four metrics per screen and each slot can be individually tailored to what you want to track for each activity.

Timers, distances, paces, speeds, heart rate, cadence, temperature, elevation and more – each one of these options offers about four alternatives giving you the most important data right there on your wrist in the way you want to read it. It’s very impressive. 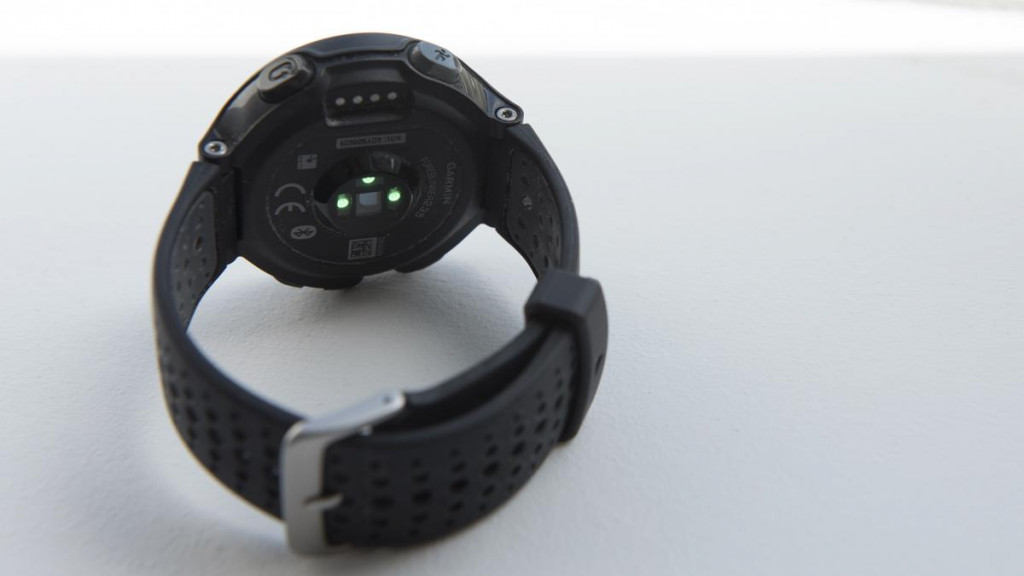 Of course, the brilliant way data is displayed is irrelevant if you can’t trust the numbers and, unfortunately, I found the Garmin 235 a little iffy on this score, mainly during the events themselves. While the watch would often correct itself before I’d completed a run, the numbers, for the most part, didn’t correspond with what was going on in real time.

This is backed up by the data. I do a 5km Parkrun every Saturday in London and each course is mapped out to be exactly that: 5km. The companion app (Garmin Connect) was close, labelling each run between 4.88 and 4.96km but, at the time, the watch was saying my pace was too slow to get the times I eventually ended up with.

I’ve been going through a spell of trying to get all my Parkruns to sub-25 minutes: on a recent outing the watch told me I was running an average pace of 5mins 10secs per kilometre, but I ignored it and kept going. Sure enough, my official time ended up at 24mins 24secs – or a pace of 4:52 per kilometre. In short, if you use your wearable just to make a record of what you’ve done, it’s only slightly off but if you use it to manage your pace while you’re out there, you might find it a real let down.

There’s no sugarcoating this. For a device that originally retailed for £299 (it can now be had for a more wallet-friendly £180) that’s deeply disappointing, especially as the cheaper Polar M430 is more accurate and my ‘reference’ running watch of choice. 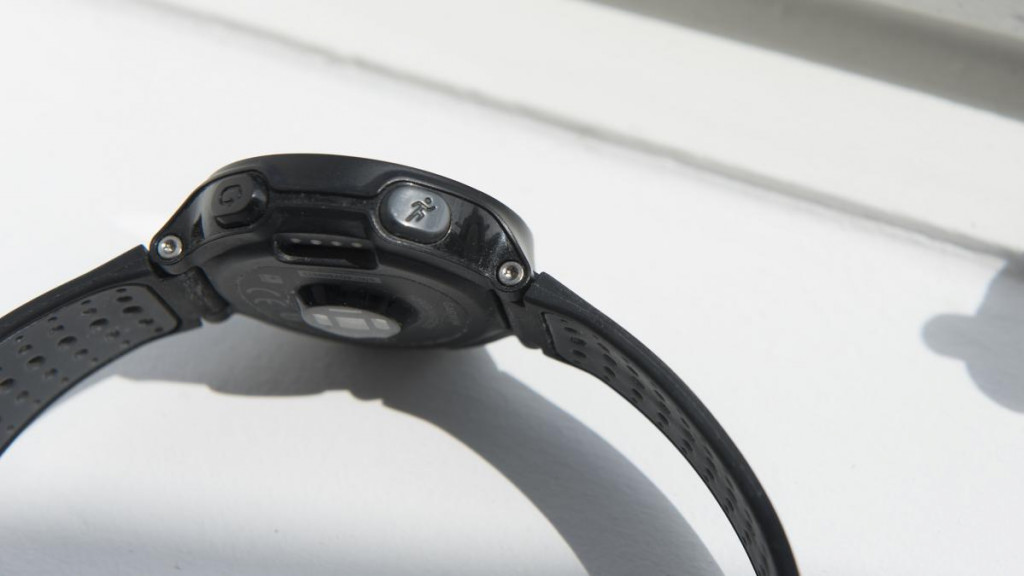 Of course, the watch is very much for everyday wear and, as a result, it will be diligently tracking steps and heart rate even when you’re not breaking into a sweat. This translates into your standard range of fitness tracker essentials such as telling you when to move if you’re sedentary for a long time and tracking your sleep.

Rather neatly, the heart rate tracking can be seen in a handy graph for the last four hours with a single click of the watch’s buttons. It’ll also send through notifications and connect with your phone’s calendar.

Elsewhere, the Garmin Forerunner 235 does more than simply track runs and steps, and its talents are expandable through Garmin’s app store. Word of warning though: despite having a 5ATM water rating, this isn’t a swimmer’s watch. Third-party apps do offer a way of tracking swims via the compass, though.

I’ve run with Garmin watches before, and the Garmin Connect app never ceases to amaze me with how fully-featured it all is. If I could stick to just one tracking app, this might well be it, as it offers way more data than I could ever convincingly use but delivers it in such a way that is still welcomingly accessible. 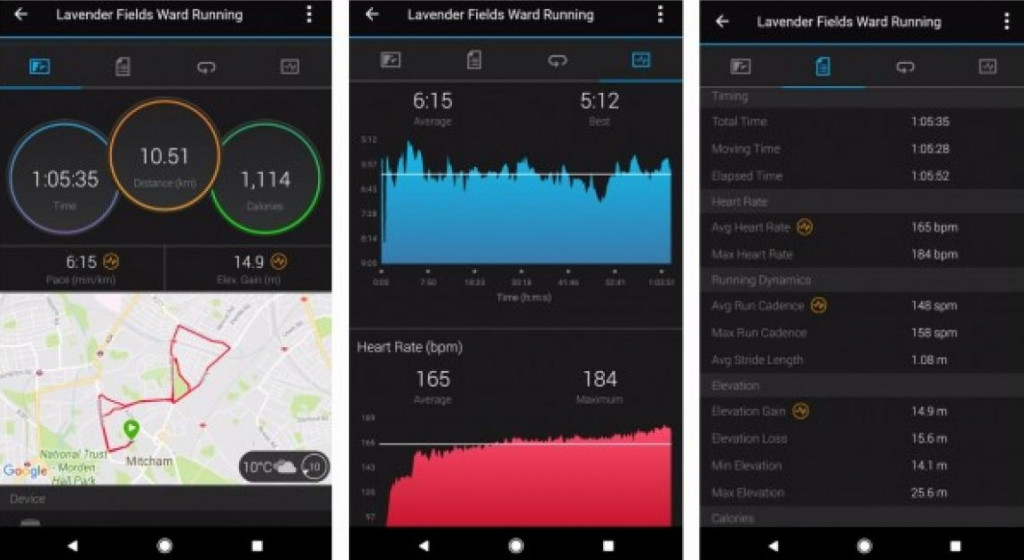 Of course, a bland series of numbers won’t leave the watch struggling to keep track of your heart rate, so all of this is accompanied by a nice map of your route and a description of the weather that day. Personal bests are recorded in a special segment of the app and there’s even room for you to add your running gear so you know when it’s time to buy that new pair of shoes you’ve got your eye on. You could possibly ask for more but I’m stumped as to what it would be.

There’s more to the app than just tracking your rides and runs, though, and it’s a mixture of automatically detected from the watch (sleep, heart rate, VO2 max) and stuff for you to enter manually (calories consumed, weight and so on). If I were to be hyper-critical, I’d say the list of apps that Garmin Connect can be connected to could be a little more comprehensive, but with Strava, MyFitnessPal and – bafflingly – Office 365 in the mix, the main contenders are present and correct. And, given how in-depth Garmin Connect is, you can fairly argue that there’s not really a need to link to anything else. 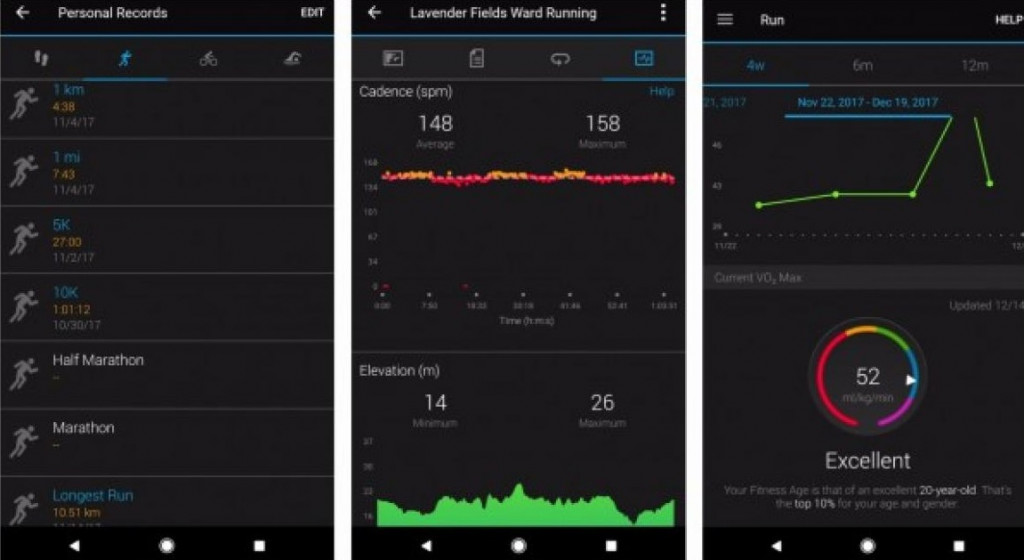 I want to give the Garmin Forerunner 235 the full five stars. I love the customisable nature of the screen, I love the app, and I appreciate a design that straddles the space between running watch and dressy wearable masterfully. I want to give it five stars, I really do.

But I can’t. This watch and its failures to accurately monitor my pacing mid-race have caused me to miss out on PBs because of iffy live data encouraging me to give up. Maybe if you’re super dedicated, that won’t matter, but for me as an easily put-off amateur, that’s a killer. 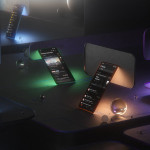 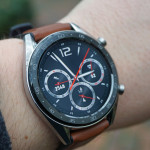 Don't miss a deal at Udemy
Best offers at Boohoo
Discounts, Sales and Deals at Carphone Warehouse
Save your money with Mobiles
Online-Shopping with The Home Depot
Best products at Myprotein