We love the Google Nest Wifi for bringing together Google Wifi and Google Home into a single product offering at long last in an even more attractive design. While it’s not worth replacing your Google Wifi or other mesh system with this, we’d heartily recommend this solution over most others short of Google’s original mesh system.

Google Nest Wifi is available now in the US, UK and Australia starting at $149/£129/AU$229 for a single router unit. This wireless router simply connects to your modem or gateway and delivers up to 2,200 square feet (204 sq meters) of Wi-Fi coverage to up to 100 connected devices.

If you want that router paired with one of Google’s “Point” range extender products, that will cost you $269/£239/AU$399. This will increase your total Wi-Fi coverage by another 1,600 square feet (149 sq meters), and the Point doubles as a Google Home speaker complete with mutable microphones and 360-degree speakers.

Finally, Google is offering a three-pack in the US and Australia $349/AU$549 (not in the UK), which will cover up to 5,400 square feet (502 sq meters) and offer all of the same Google Assistant features available only via the Point devices.

Unfortunately, it appears that Google is only offering its beige “Sand” and light blue “Mist” colors in the US, as these options do not appear on the UK or Australian Google stores online.

How does this all stack up against Google’s new rival in home networking, Amazon? Well, Amazon’s latest entry-level Eero mesh solution is a bit cheaper at just $99 (£99, about AU$140), but its router alone only covers up to 1,500 square feet (139 sq meters) compared to the Nest Wifi router covering up to 2,200 square feet (204 sq meters).

Google Nest Wifi appears to offer both more flexibility and wider coverage than Amazon’s latest Eero devices, furthered by the fact that you can buy Nest Wifi Points on their own and add those to your existing Google Wifi network. Also, while Amazon’s new Eero mesh network supports voice controls via any existing Alexa speaker, the Nest Wifi Point devices are Google Home speakers complete with microphones and a speaker on the bottom. 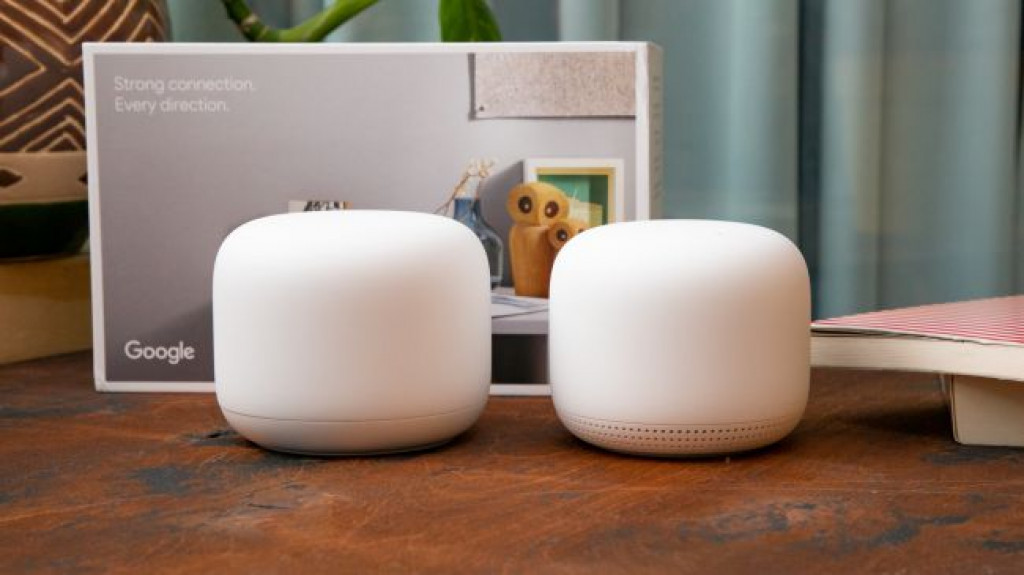 The Google Nest Wifi design is a stark departure from the Google Wifi that preceded it. Gone are the glossy, white plastic cylinders in favor of some even more innocuous matte plastic domes that round off in comfortable corners at either end.

As for the Router device, it’s even lighter in terms of design features than the Points that double as Google Home speakers. All you’ll find here is a single, white LED that shines through the plastic shell to indicate a connection. On the bottom, you’ll find a tough rubber base hiding two Ethernet ports (one WAN and one LAN) as well as a standard AC charging port.

Of course, the Point device is a bit more stylish while looking nearly identical. Its major differences are the four far-field microphones on top and the 360-degree speaker with 40mm driver inside, bedecked by a single, round LED on the undercarriage that responds when asked questions via your voice. These units have no Ethernet ports included, making them considerably less useful than the previous-generation products but perhaps more focused.

When it comes to setting the network up and the interface therein, Nest Wifi is no longer set up using the Google Wifi app but rather the Google Home app. This is because part of the system is technically a Google Home speaker, making it easier to manage both within the same app. (Google Wifi will still exist for those who stick with the original model or opt to just add a Nest Wifi point to their original model.)

Of course, you’ll need a smartphone with the Google Home app to set up the Nest Wifi, which sees Google making a big assumption about who will be able to use this router. However, we have to imagine that the vast majority of Americans and Britons ready for a new router will have this access.

The setup process is a little wooly at times, which isn’t ideal, but retrying the connection a few times throughout will get you through the whole thing. Adding a Wifi Point after the main Router is done in exactly the same way, and can be just as … start-and-stop. Ultimately, Nest Wifi does do about 90% of the setup and updating itself, which is very welcome.

As for the interface, Google has brought the major features over from the Wifi app to the Home app – like setting a priority device, creating a guest network and setting family controls – but it does lose a bit of the fine control along the way. Particularly, you can no longer see exactly which Wifi device each connected device is actually tethered to and change that accordingly.

Instead, you’re left to assume and trust that Nest Wifi will automatically connect devices to the best possible Wi-Fi provider on-the-fly, which wasn’t always the case with the previous model. Google’s new, behind-the-scenes cloud features using machine learning chips within its Nest devices, which will automatically prioritize types of traffic based on bandwidth needs as well as physical position among other factors, should make up for this as the system learns your usage habits.

All told, having trudged through the days of typing “192.168.1.1” into our web browsers, we welcome the simplicity of the controls for Google Nest Wifi – even if it means giving up much of that fine tuning. Simply put, we don’t have the time for that nonsense any longer, but for those that care: know that this is not the system to go with if you want that level of control. 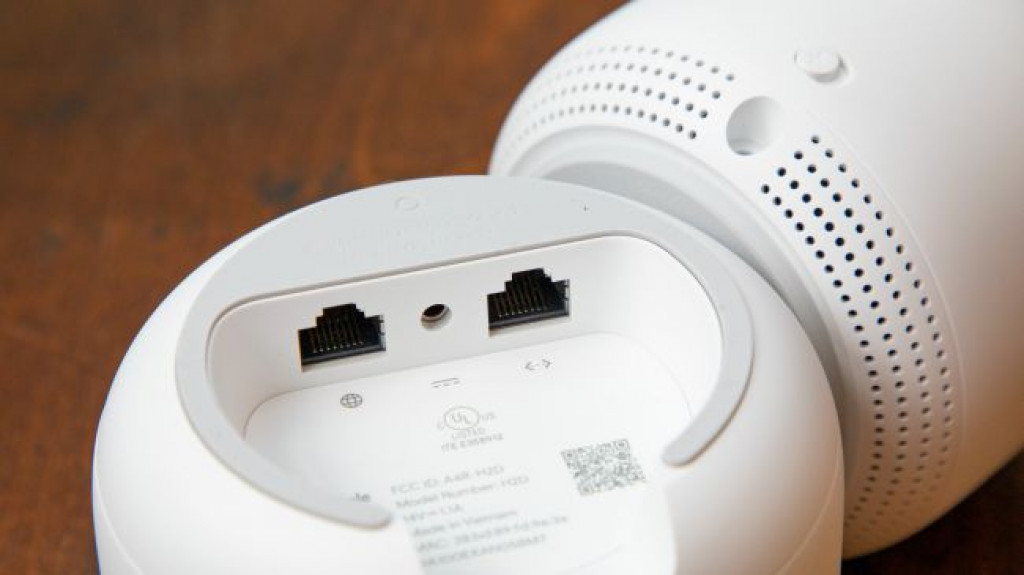 We’ve found the Google Nest Wifi to perform just as well as the original Google Wifi in our normal use, chewing through downloads and streaming video over our 100Mbps service via Verizon. This is especially impressive considering that our review unit only includes a single router and Point device, compared to the three router/points included in our Google Wifi setup.

This latter Speed Test result doesn’t line up with our experience using the router and Point, however, and 2.4GHz is generally slower than 5GHz. So, this could be up to the 15-inch Surface Book 2 we used to run these tests or an anomaly in the 2.4GHz version of the Speed Test.

Ultimately, we’re pleased with how the Nest Wifi performs, but it’s not blowing us away in terms of reaching the utmost capacity of the 100Mbps service that we pay for. There are certainly other routers out there that could help us get the most out of the service we’re paying for, but they’d certainly be uglier and more noodly to manipulate and control.

Speaking of which, we love being able to test our Wi-Fi speed by simply asking Google to do it for us or making a few taps within the Google Home app. This is how easy Wi-Fi should have been for a long time. 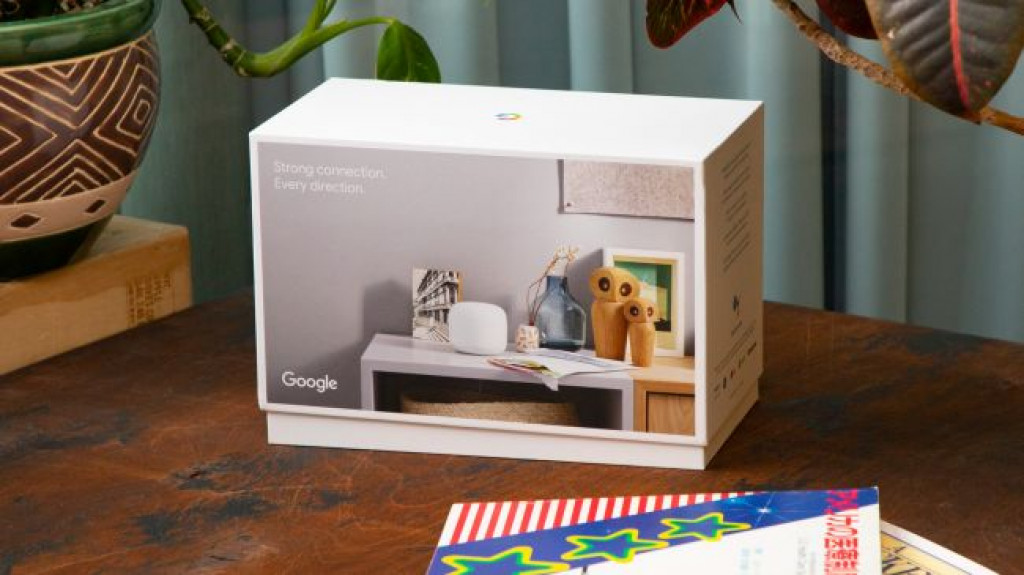 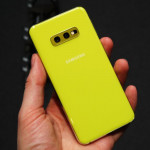 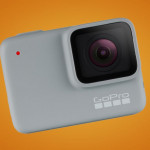 Should I buy a GoPro Hero 7 White?

Don't miss a deal at Bodybuilding
Best offers at Virgin Media
Discounts, Sales and Deals at Marks and Spencer
Save your money with Carphone Warehouse
Online-Shopping with Farfetch
Best products at Intuit Small Business