Microsoft’s Surface Earbuds are bigger, longer lasting and have far more robust features than Apple’s AirPods. However, they’re also more expensive and stick out like a sore thumb as compared to AirPods, making this a tough call so early in the game.

Microsoft surprised us all at its October 2019 event keynote with the debut of the Surface Earbuds, the follow-up to the Surface Headphones and its answer to Apple’s market dominating AirPods.

The Windows company’s take on true wireless earbuds is far more robust and feature-rich than Apple’s, but that also makes them more expensive and slightly less portable.

Regardless, we’re mighty impressed by the Surface Earbuds in practically every regard, from audio performance to additional features. Both Google and Apple have a not-so-little something to worry about, too, as Surface Earbuds will work on either platform. 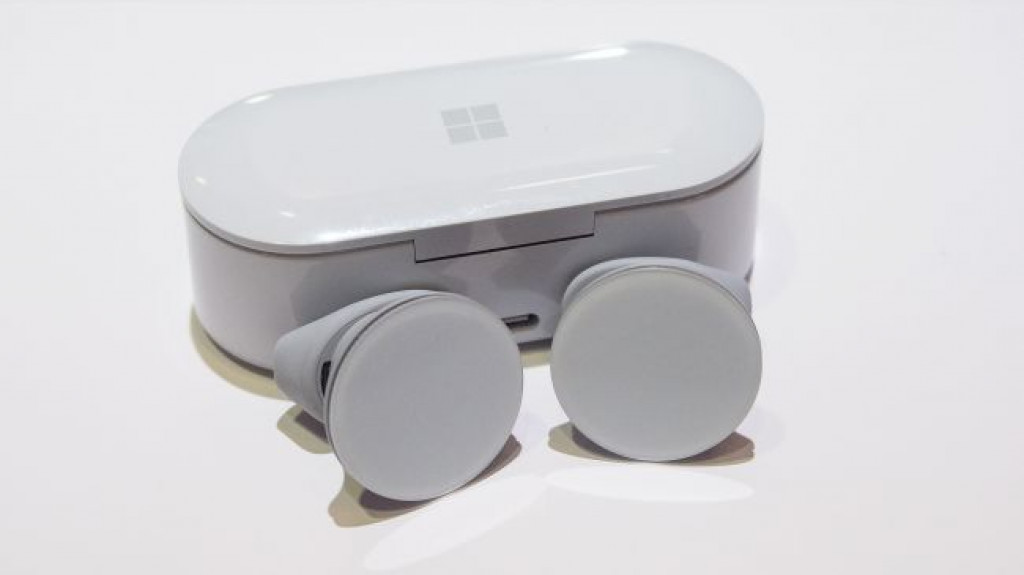 That price includes, of course, two Surface Earbuds along with a rather sizable charging case and three sizes of silicone ear tips. 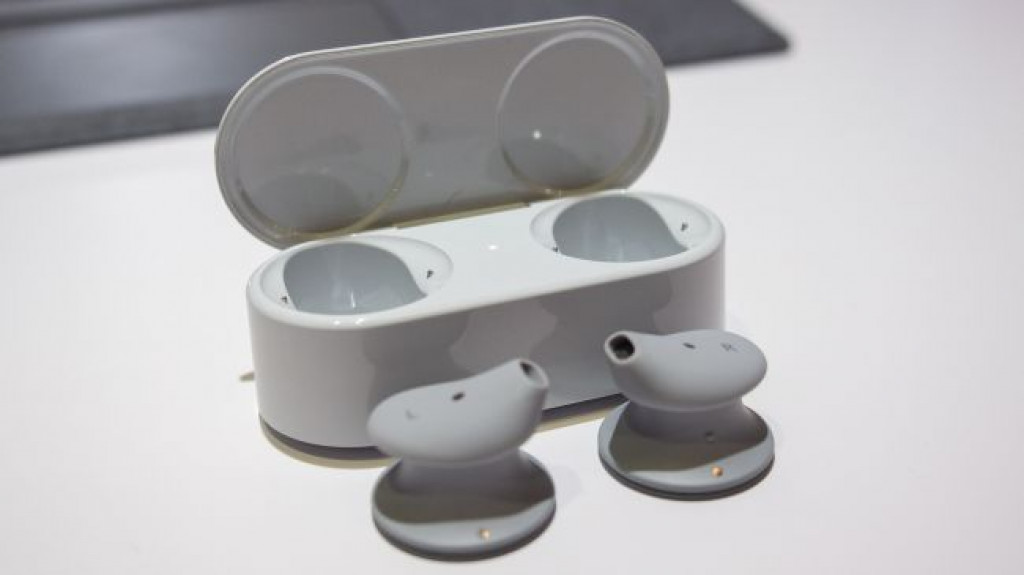 As avid AirPod users, we’ll say that while Microsoft’s true wireless earbuds aren’t nearly as turnkey as we find Apple’s to be, they’re certainly more robust in what they can do and how they’re fitted.

For starters, Surface Earbuds aren’t simply a “one size fits all” product, rather every box comes with ‘small’, ‘medium’ and ‘large’ ear tips, so that you can get that much closer to a truly snug fit for your unique ears. In this regard, there’s far more personalization to Surface Earbuds than AirPods – even if you can’t engrave the Surface Earbuds case for free, like Apple’s … yet.

However, while we find the fit to be incredibly comfortably and snug, the Earbuds’ design is a little … out there. Sure, we’ve become accustomed to the AirPods aesthetic, and we know how widely it’s hated, but these things are just honking big.

They almost look like gauge earrings that you see peppered throughout the crowds when Warped Tour comes into town. (Imagine wearing gauges and these earbuds?)

Small side note here: we also find the charging case to be rather large, so much so that it looks as if it would be difficult to fit in your pocket. Unlike an AirPods case, these will probably live in a bag when not in use, whereas Apple’s case fits in almost any normal pocket without issue.

With that size in mind, the Surface Earbuds do weigh a bit more heavily on your ears than AirPods, but that is somewhat offset by the customizable fit. The Earbuds don’t get too far into your ear so as to be uncomfortable or create too strong of a seal in your ear canal.

In fact, Microsoft aimed for the Surface Earbuds to allow for a bit of ambient sound leakage, so as to be more conducive to office environments and outdoor use. We held an entire conversation with two Microsoft employees giving us a tour of the Earbuds with them still in our ears – we don’t think we could do that with AirPods in our ears for certain.

Microsoft looks to make up for this allowance of ambient sound with clever audio engineering. 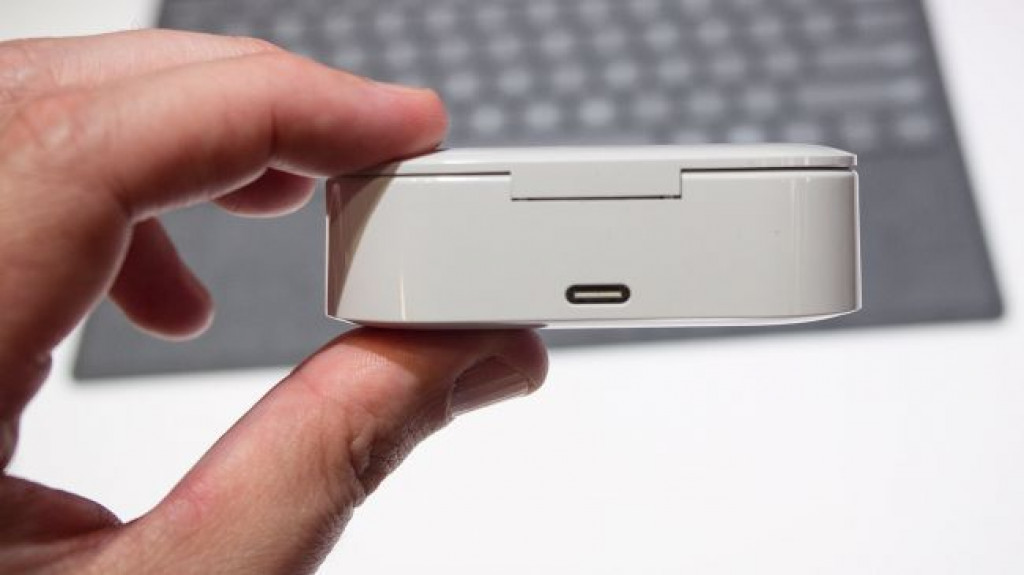 However, that phrase also pertains to the voice response in the Earbuds using two microphones in each earbud. These help to cancel out background noise during phone calls or conversing with your digital assistant of choice.

Microsoft has also tuned the Earbuds to not climb above 108 decibels at the highest volume setting, so as to protect users’ ears from permanent damage. Trust us, you don’t even need all of those decibels to drown out the din of a keynote showroom flooded with a raucous DJ performance with Pearl Jam’s “Jeremy”.

But, that’s just the beginning of what these earbuds can do. The caps on these headphones are capacitive touch surfaces (teehee) that respond to swipes and taps for different functions.

Swiping up and down raises or lowers the volume by about seven points per swipe, we’ve found. Meanwhile swipes forward or backward skip ahead or replay/skip back tracks, respectively. Double tapping causes audio to play or pause, and finally, holding a finger to either Earbud conjures up the digital assistant of your choice.

We say this because Surface Earbuds support Windows 10 (natch), Android devices as far back as version 4.4, Apple devices running iOS 9 or later and Bluetooth 4.1 or 4.2 protocols. We’re also told specifically that using this long-press function on iPhone or Android will bring up Siri or Google Assistant, respectively. This will be managed by a Surface Earbuds app that will launch for all of these operating systems.

The gestures work just fine in our experience, and are quite intuitive. Even if you weren’t given a manual, we imagine you’d figure out how to use each of these swipes and taps within a few minutes.

What really has mind-blowing potential, though, is live translation through subtitles. While the Microsoft event space Wi-Fi was a little too spotty to directly translate, we spat out a few phrases to see them appear as subtitles beneath a PowerPoint slide practically instantly. With a solid internet connection, this could be a game changer in a similar vein to Google’s Translate function on its Pixel Buds.

Finally, the Surface Buds offer up to 24 hours of battery life, though in eight-hour increments at a time through two additional charges in the included case. That’s plenty to get through a work day and the commute.

Comparatively, Apple’s AirPods are far more limited in their gesture control, down to only taps. And, while they offer the same 24 hours of battery, the AirPods can only last up to five hours at a time.

Charging the Surface Buds for 10 minutes buys you another hour of play time, while charging the AirPods for 15 minutes gets you a longer three hours of play time. 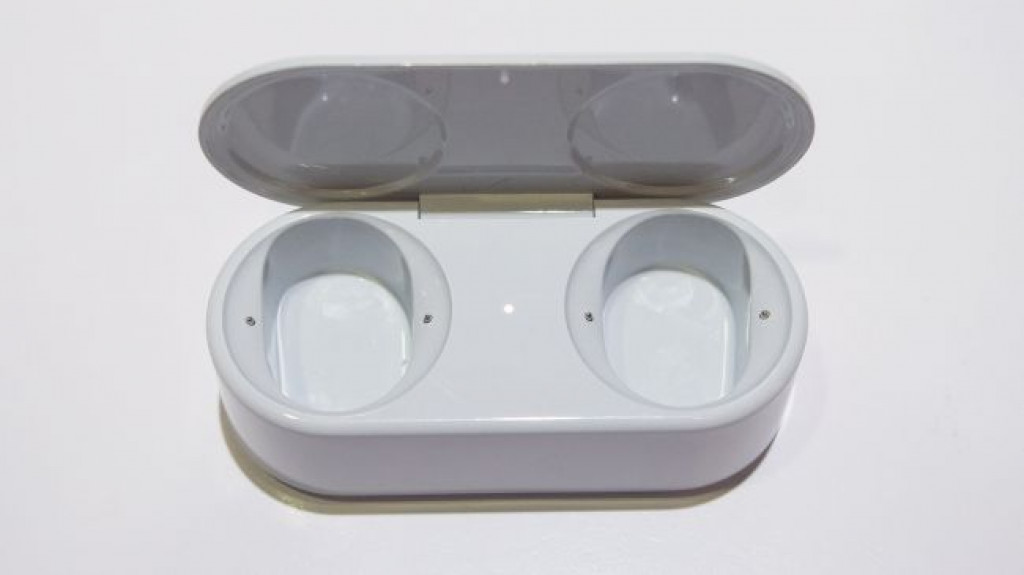 All told, the Microsoft Surface Earbuds have quite a lot going for them, and they’re markedly different from the elephant in the room. They’re bigger, longer lasting and have far more robust features than Apple’s AirPods. They can also be used to nearly their full effect on a number of devices.

However, they’re also a little more unwieldy in terms of weight, and they stick out like more of a sore thumb than even AirPods do, as so many claim. (Though, we don’t really understand that.) They’re also considerably more expensive and less portable than the industry leader.

The Microsoft Surface Earbuds in turn deliver excellent audio at first listen, and are more conducive to office and outdoor environments, like city streets. We can’t wait to try the Surface Buds out extensively to see whether they’re worth the extra scratch. 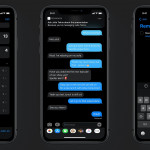 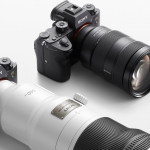 Don't miss a deal at Ticketmaster UK
Best offers at EE Mobile
Discounts, Sales and Deals at Sephora
Save your money with Argos
Online-Shopping with Vimeo
Best products at Groupon