We spent only a short time with the new Lumix S1H, but that was enough to show off the full-frame mirrorless camera’s extensive cinema capabilities – and we were suitably impressed. Its advanced video features are excellent and its built-in stability could well remove the need for a gimbal, while the superb cooling system keeps the camera going for long periods of use without overheating.

While Sony’s video-centric Alpha A7S III may still be in limbo, at Cine Gear Expo in May Panasonic announced that its first full-frame video-centric mirrorless camera would arrive around September. And, true to its word, the Lumix S1H has now been made official, becoming the first professional cinema camera capable of 6K 10-bit internal recording.

The $3,999 (AU$5,999, UK price TBC) Lumix S1H is very much the love-child of Panasonic’s VariCam and the Lumix GH5, and has the makings to become every cinematographer’s go-to camera. It’s designed to work in pretty much any conditions – rain, shine, low light or brightly back-lit, the S1H looks like it can handle it all.

While the S1H might look like its slightly older S-series siblings, there’s one important distinguishing factor – the S1H is primarily a video camera, albeit one that happens to take amazing stills. So in this hands-on review we’re concentrating on its video capabilities.

We were introduced to the camera in the perfect setting just hours before its official international debut in Hollywood – inside the Sydney Props Specialists’ warehouse, a veritable rabbit hole of cinema goodies and studio space that got us as close to Hollywood as we could.

It’s clear from the get-go that the Lumix S1H is designed for cinema, more so than even its predecessor, the video-centric Lumix S1. While both snappers share the same resolution, the sensor for the S1H was developed to handle the new camera’s pro-level video capabilities.

There’s a whole smorgasbord of video resolutions, frame rates and bitrates to choose from on the S1H – from 6K/24p to 4K/30p and 4K/60p, and plenty more besides – with most of them available at no crop. If, however, you feel the need to crop your footage, there’s a Super35 Mode available which also maintains 4K resolution.

There’s also the option to shoot with anamorphic lenses, although it’s something we haven’t yet been able to try. Anamorphic shooting is available using the full 3:2 sensor in 6K in the 10-bit 4:2:0 color space. Panasonic was quick to point out that while shooting anamorphic you can de-squeeze the image in-camera when viewing, with several aspect ratios available in the menu system.

There are also different recording modes to choose from, including Cinelike Gamma, V-Log/V-Gamut and HDR in HLG (Hybrid Log Gamma), with color profiles adjustable in-camera. When shooting in V-Log/V-Gamut, Panasonic promises 14 stops of dynamic range. 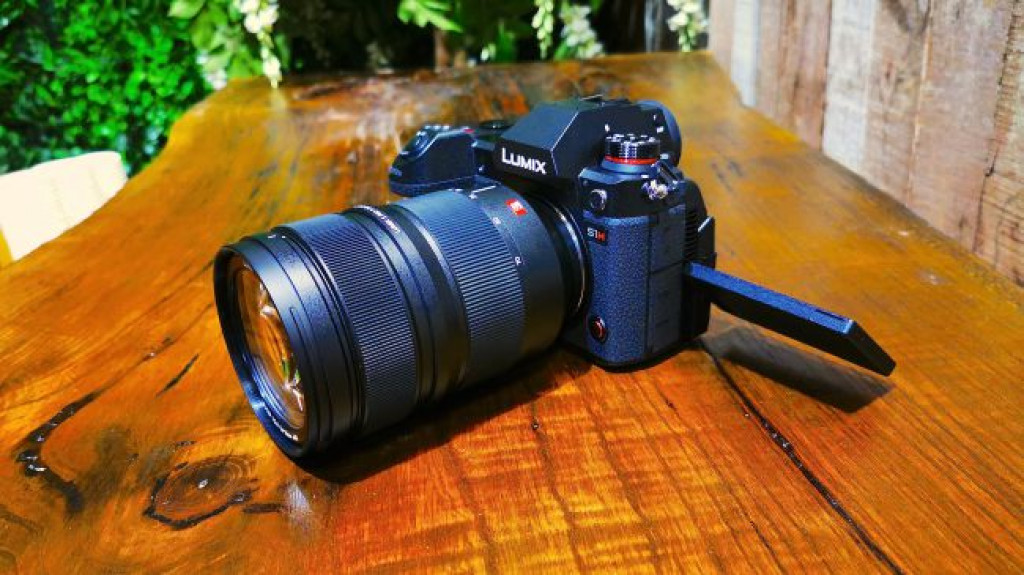 Panasonic has included an anti-aliasing filter on the S1H – something the cheaper S1 missed out on, and which is important on any video-centric camera to reduce moiré.

Taking a leaf out of the GH5’s spec sheet, Panasonic has included its Dual Native ISO system in the S1H as well. This feature comes into play when shooting in V-Log/V-Gamut, when the native ISO jumps from 100 and 640 to 640 and 4000, and is very handy in low-light situations, resulting in sharp footage with low noise.

This ability was shown off to us when shooting a Gatsby-like scene in a studio with candles and a low overhead light, and also when shooting a rock band playing in a dimly-lit studio, with a smoke machine spewing fog into the room. The results from a single take in each setting were stupendous, with beautiful colors and crisp images with barely any grain. 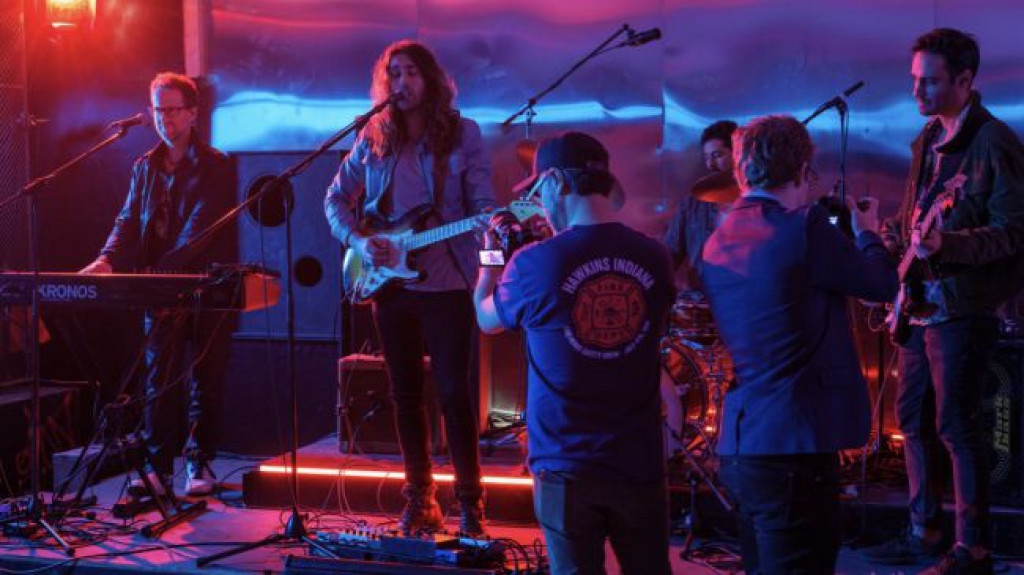 The inbuilt five-axis stabilization of the S1H is pretty good when it comes to keeping footage smooth when shooting handheld, but combining this with the two-axis Optical Image Stabilization of OIS lenses gives the cinematographer the ability to shoot without using a gimbal if necessary.

When shooting a 1950s diner scene with dancers swinging on the chequered floor, footage taken using just handheld panning looked as if the camera was on a rig. This Dual IS 2 technology (already available on the GH5) allows for more precision and buttery smooth footage when using the camera handheld for long periods of time. Even when holding the camera aloft (like many of us would do if we were standing in the crowd while watching a band perform) for minutes at a time offers near-perfect results. 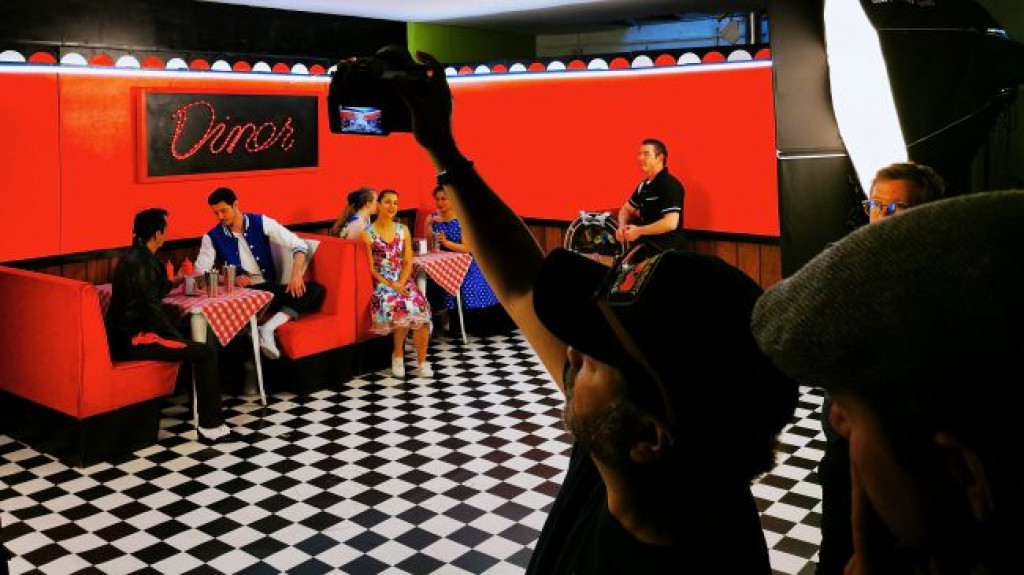 And where most cameras can overheat – and shut down – when used for extended periods of time, the S1H can hold its own thanks to its built-in cooling system. A fan placed close to the sensor helps keep operating temperatures down, allowing videographers to continue shooting even in warm conditions for long periods of time, while vents on either side of the camera body allows cool air to enter at one end and hot air to exit at the other.

You’d be forgiven for thinking the Panasonic S1H is identical to the other two S-series snappers; but while all three look similar, there are some major differences between the new camera and its older siblings.

The first one would be the vents on the outside of the body mentioned above. Panasonic promises that the S1H is weather-sealed, and if you thought the vents of the cooling system would allow dust and moisture to enter, think again. The vents you see on the body of the camera are external – there’s no opening between the fan chamber and the body itself.

The second, and very obvious, difference is the fully articulating screen, which Panasonic says has 150% higher luminance than those on the S1 and the S1R. The rear LCD is attached to a tilting plate that extends back from the camera body, moving the screen away from any of the ports on the side. There’s also a Live View Boost mode for use in near-total darkness. 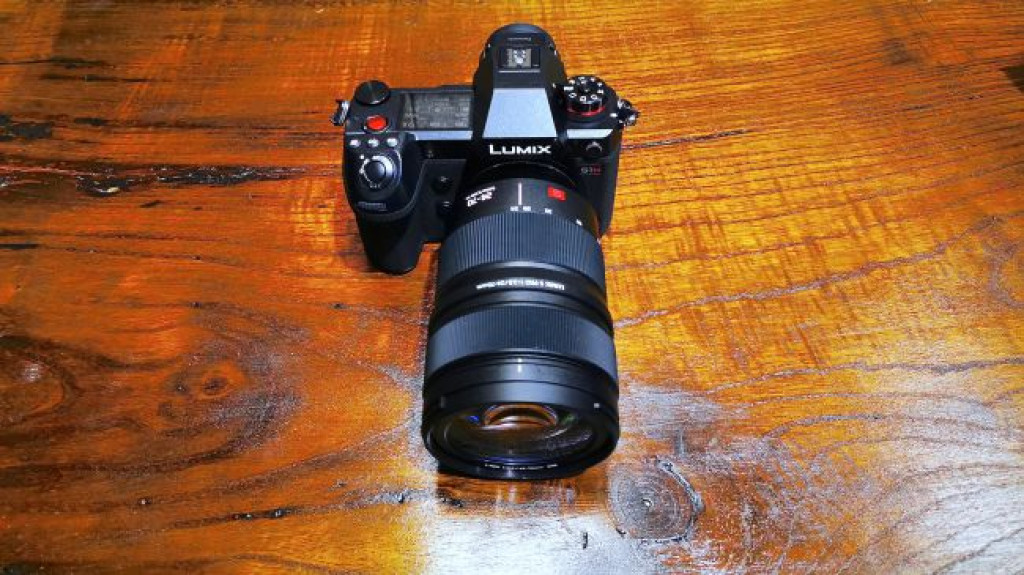 Tally lights have been added to both the front and rear panel of the camera, clearly indicating to both the cinematographer and the subject when the camera is recording. And while it does have the usual shutter button on the front-right shoulder of the camera, there’s also a large red record button on the top plate, giving users access to one or the other no matter what kind of rig they’re using.

The top plate also looks different because of the status display, which is now larger. It’s a 1.8-inch always-on backlit display which, Panasonic says, barely consumes any extra power at all.

There are dual SD card slots, both compatible with the latest V90 cards, so speeds shouldn’t be an issue when recording. Moreover, it’s possible to record to both cards at the same time, should you need to keep footage backed up for emergencies.

The usual ports are available on the right side of the camera, including a USB Type-C port which can be used to keep the battery topped up while the camera is in use.

As mentioned earlier, the Lumix S1H supports a whole array of video resolutions in different frame rates. While these options could have made the S1H’s menu system a mind-boggling cornucopia of confusion, Panasonic has made it easier for you to find what you need by allowing you to filter by resolution, frame rate, codec and HLG setting. The My List option that was introduced with the S1 and S1R is also available in the S1H, allowing you to limit the menu to only the options you think you will ever need.

The S1H also comes with plenty of monitoring and display options, including a waveform monitor that can be scaled and positioned wherever necessary on the display, along with a vectroscope, zebra patterns with plenty of preset options (or you can set your own custom one) to indicate highlighted areas, color bars and a video frame marker. 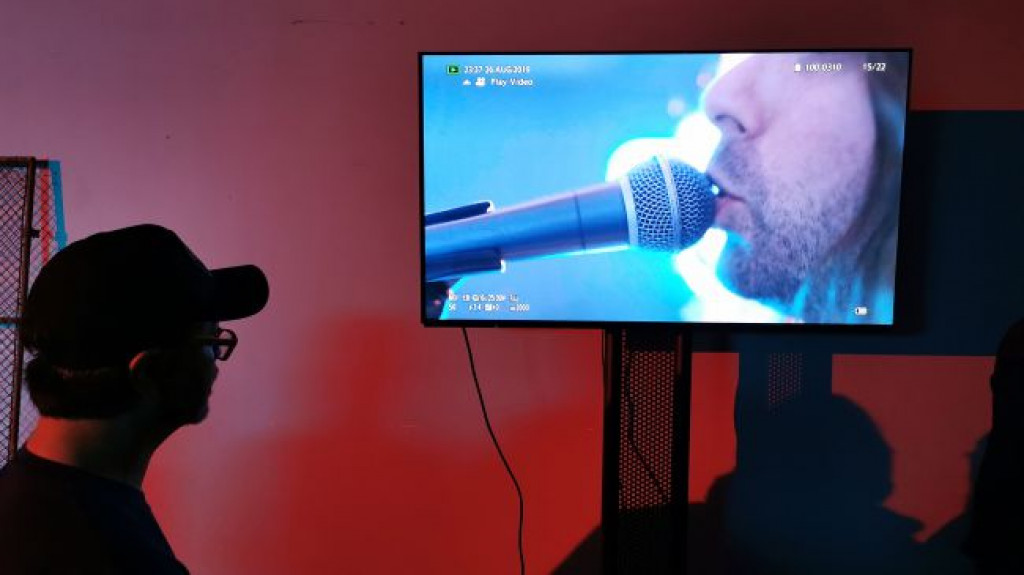 For many videographers the Panasonic Lumix S1 might be a tempting prospect – it supports Panasonic’s V-Log mode and 4:2:2 10-bit recording for a cheaper price – but there’s a lot more on offer when it comes to the S1H.

Panasonic has clearly paid a lot of attention to the tiny details when it comes to the S1H – be it in the cooling system, the menu options or the in-body stabilization that gives the user so much more freedom, or even the inclusion of tally lamps and the two recording buttons. Even the menu system has been designed to make using the camera quick and easy.

Based on our brief time with it, the S1H could well be the next pro-level video camera to beat, and it seems like it’ll perform well as a stills camera too – provided, of course, you’ve got the spare change to foot the $4,000 bill. 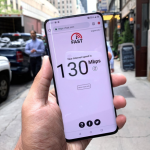 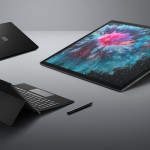 Don't miss a deal at Nike DE
Best offers at EE Mobile
Discounts, Sales and Deals at Carphone Warehouse
Save your money with Surfdome
Online-Shopping with O2 Mobile
Best products at Turbo Tax