Before you even think about adding the Huawei Mate 40 Pro to your shopping basket, it’s almost impossible to ignore the warning signs. Carphone Warehouse, the sole UK supplier outside of Huawei’s own storefront, has sensibly placed not one, not two, but three bright-yellow warning notices on the Mate 40 Pro’s buying page, encouraging customers to do a bit of light reading before potentially spending over £1,000 for one.

For the uninitiated, the Mate 40 Pro – like the P40 and Mate 30 before it – doesn’t come with the same suite of Google apps as other Android-based smartphones. Likewise, the Play Store is missing in action, replaced by Huawei’s own (rather limited) App Gallery.

This obviously puts a big dent in the Mate 40 Pro’s appeal but, with the sheer impressiveness of the hardware on offer, it’s entirely possible that Huawei’s latest top-shelf flagship could stand on its own two feet, carving its own niche away from the familiarity of Google’s widely-used mobile ecosystem.

Huawei Mate 40 Pro preview: What you need to know

Like last year, whether or not you buy a Mate 40 Pro depends almost entirely on the way in which you answer one simple question: would you use an expensive smartphone without access to any Google apps? If you don’t mind ditching Google and you’re patient enough to wait for Huawei to drip-feed more applications into its own app store, then it’s possible that you’ll be rewarded with a sublime high-priced flagship in the Mate 40 Pro.

On the hardware front, at least, the Mate 40 Pro is practically spotless. To start with, it’s the first of Huawei’s smartphones to be powered by the new Kirin 9000 chipset, which is built using a similar 5nm fabrication process to Apple’s A14 Bionic and promises substantial performance gains on last year’s Kirin 990 (found inside the Mate 30 Pro). 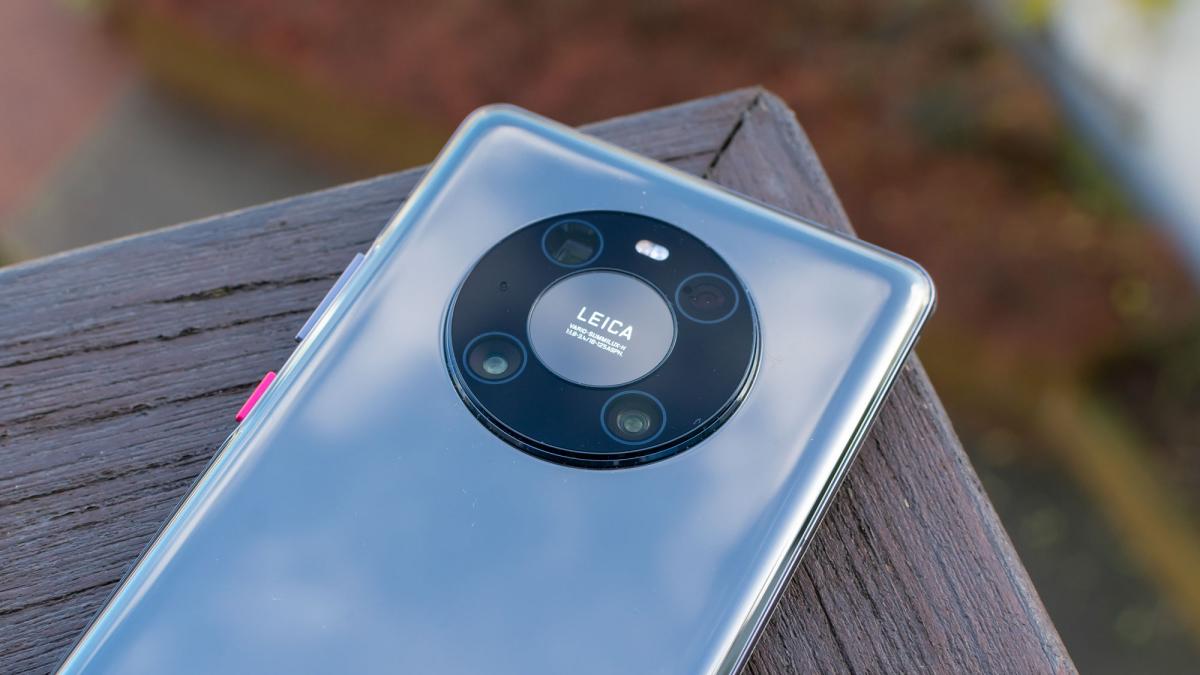 It also has a large 6.76in OLED screen with a maximum refresh rate of 90Hz and support for HDR10 content. On the back of the phone, is a Leica-branded triple-camera, consisting of a combination of 50MP, 12MP (5x zoom) and 20MP (ultrawide) cameras. The Mate 40 Pro also comes with 5G support as standard, as well as IP68-rated protection and a 4,400mAh battery.

That’s a lot of goodies at your fingertips but the Mate 40 Pro’s appeal begins to soften as soon as you discover how much it costs. With a launch price of £1,100, the Mate 40 Pro isn’t the cheapest handset we’ve reviewed this year, not by any stretch of the imagination.

On that point, EE is currently the only UK network provider offering Mate 40 Pro contracts. Prices start at £49 a month with an upfront cost of £100 and a measly 4GB of monthly data. There’s a good chance you’ll whizz past this in no time at all, so if you’re a data guzzler, be prepared to pay a wallet-straining £66 a month for an unlimited contract. Ouch.

On to the Mate 40 Pro’s competition, which, at this price consists of the usual suspects. The brand-spanking-new iPhone 12 Pro Max comes in at £1,099 and manages to outdo the Mate 40 Pro in the camera department with a larger main sensor and unique sensor-shift image stabilisation system. Samsung’s top-end Galaxy Note 20 Ultra costs a bit more than both of these phones (£1,180) but it also manages to offer something different with its 50x hybrid zoom camera and bundled S Pen stylus.

Speaking of crowd-pleasing characteristics, the Mate 40 Pro’s design is quite eye-catching. It’s only available in “Mystic Silver” this year, but while the Mate 40 Pro lacks the multi-coloured choices offered by most of its competitors, you do get a smartphone that looks stunning, with a design befitting its high asking price. 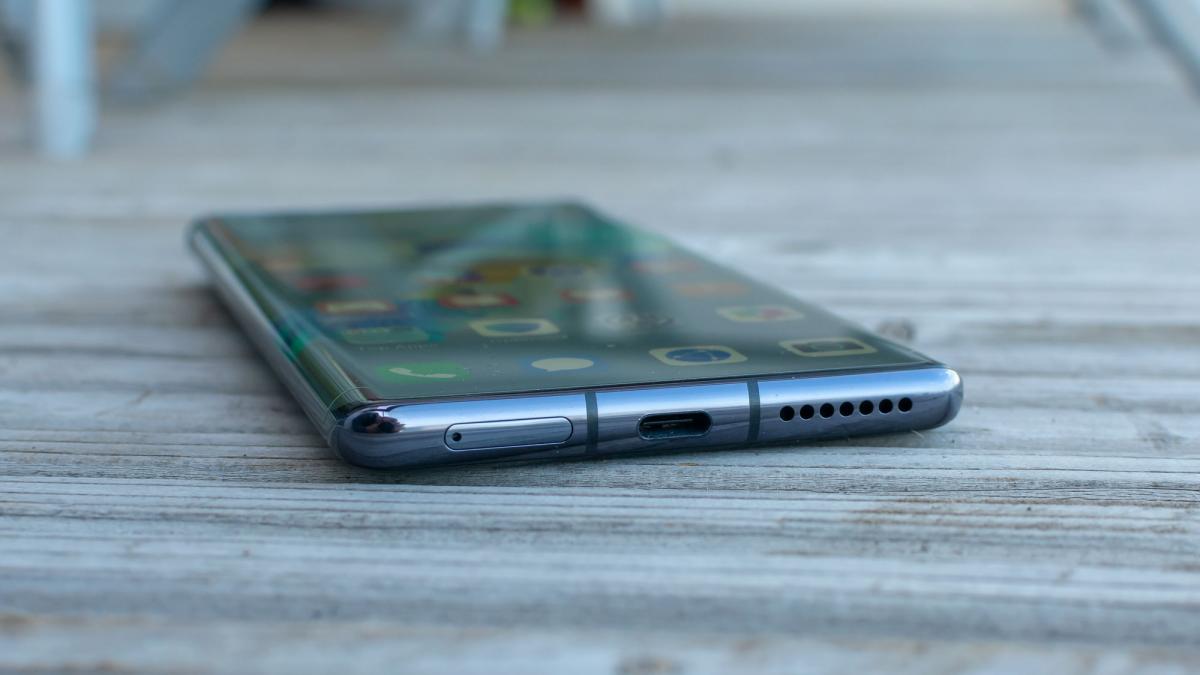 Kicking things off, the Mate 40 Pro’s gigantic 6.76in display curves rather dramatically around the left and right edges of the handset, at an 88-degree curvature. Not only does this look rather swish, but these curved edges also serve a practical purpose since they can also be used to access a list of your most-used apps, by simply swiping your finger from the edge into the centre of the screen.

In more good news, despite using the same screen curvature as last year’s Mate 30 Pro, Huawei has also reintroduced the physical volume rocker on the right edge of the handset, which sits above the phone’s red power button. The Mate 30 Pro’s speaker volume could only be adjusted via an on-screen slider and it was much too fiddly for my tastes.

Another area where the Mate 40 Pro has received a fresh lick of paint is with the selfie cutout at the top of the display. Ditching the rather obtrusive iPhone-style notch of the previous model, the Mate 40 Pro’s dual-camera array is now neatly embedded in a horizontal cutout in the top-left corner of the screen. 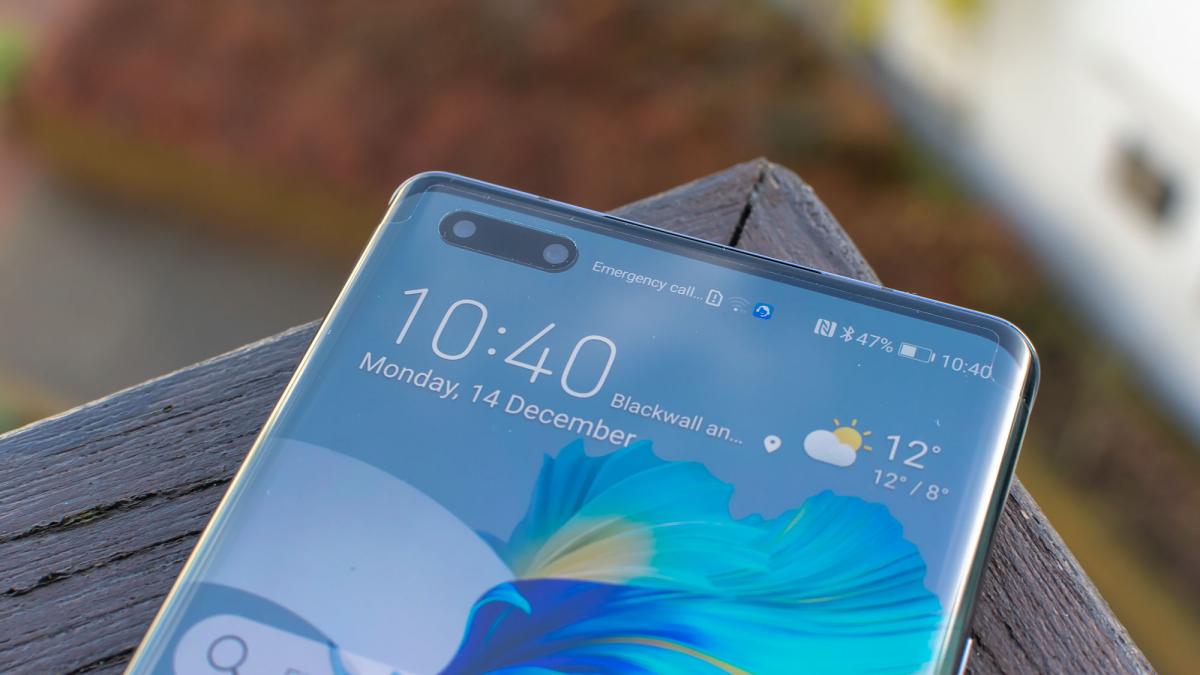 On that note, should you decide to flip the phone over, not only will you be treated to a reflective mirrored surface but you might also notice the phone’s three Leica cameras, which are neatly arranged within a large circular disk. It’s actually quite similar in style to last year’s camera arrangement, although it does appear to be a bit chunkier this time around.

Moving on, it may come as no surprise that the Mate 40 Pro’s display is among the best in the business. As for the technical details, what you’re getting this year is a 6.76in OLED panel at a resolution of 1,344 x 2,722 with a maximum refresh rate of 90Hz. The Mate 40 Pro also supports HDR10 playback on the likes of Netflix, Amazon Prime Video and YouTube.

As for colour performance, this is an area where the Mate 40 Pro really shines. As usual, you have a choice of two colour modes, although I recommend switching to the phone’s “Normal” display profile when you turn it on for the first time, which targets the sRGB colour space and manages to deliver a 0.9 Delta E colour accuracy average. 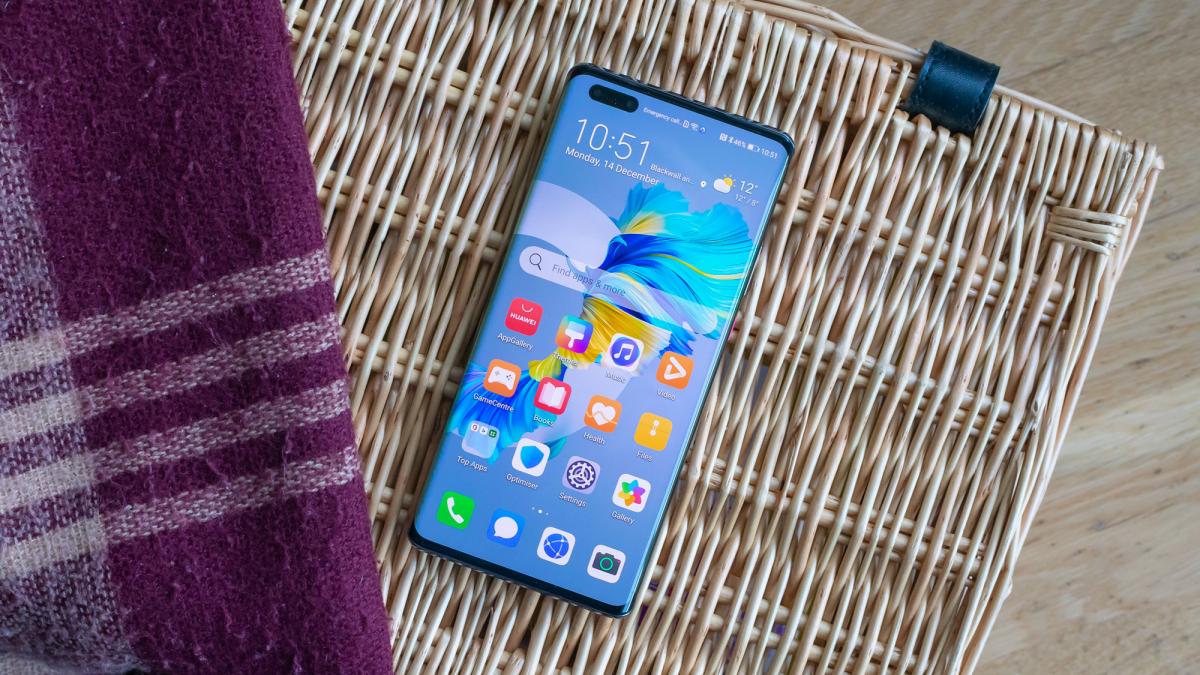 My only gripe is that, according to my own measurements, the Mate 40 Pro’s screen struggles a bit when it comes to maximum brightness. Peaking at 455cd/m2 in auto mode, it fails to reach the same levels of luminosity offered by the iPhone 12 Pro, and the differences between the two are quite noticeable when viewing darker scenes in The Queen’s Gambit on Netflix.

The Mate series has always been the first to use Huawei’s latest and greatest mobile chipsets, and the Mate 40 Pro is no different. Take a peek inside and you’ll find the new Kirin 9000, which is Huawei’s first 5nm CPU – built using the same fabrication process as the Apple A14 Bionic and Samsung’s upcoming Exynos 1080 chips – and consists of eight cores with a maximum clock speed of 3.13GHz.

There’s also a healthy dollop of 8GB of RAM, as well as 256GB of UFS 3.1 storage, which can be expanded with one of Huawei’s SIM-sized nano memory cards.

Unfortunately, I wasn’t able to run our usual selection of benchmarking tests, so I can’t directly compare performance against the Mate 40 Pro’s competitors. A frustrating combination of Huawei’s own limited app store and a locked-down handset (I was unable to install the Geekbench 5 and GFXBench APK files) is at fault, which means that I won’t be providing any benchmark figures in this review and as such, I’m hesitant to give the Mate 40 Pro a final score at this stage

In my struggles, I even tried using Huawei’s “Phone Clone” app, which (in theory) transfers apps from an old Android phone to your new Huawei handset, but ultimately my efforts were made in vain.

The good news is that, based purely on anecdotal evidence, the Mate 40 Pro’s performance is blisteringly fast. It unlocks in the blink of an eye, juggles multiple applications without breaking a sweat and runs the (admittedly limited) selection of AppGallery games at fluid frame rates without any noticeable dips in overall performance.

As for battery life, this is something I was able to test in full. Setting the brightness to 170cd/m2 with flight mode engaged, the Mate 40 Pro lasted 24hrs 51mins before the juice ran dry. This comfortably brings Huawei’s flagship into the upper echelons when it comes to battery life, and you shouldn’t have any issues with squeezing out a day’s worth of use on a single charge, no matter how heavily you use it.

On to the Mate 40 Pro’s cameras, which are deployed in a similar arrangement to the P40 Pro. This consists of a primary 50MP (f/1.9) camera, 12MP (f/3.4) 5x telephoto zoom camera and a 20MP (f/1.8) ultrawide unit with a field of view of 100 degrees. On the front of the phone, you’ll find a dual selfie array with a 12MP (f/2.4) main lens paired with a time-of-flight (ToF) sensor to help with those fancy blurred background selfies.

As ever, this busy arrangement of cameras helps to create a marvellously well-rounded shooting experience. No matter the subject matter, you’re able to switch between a large variety of zoom lengths on the fly, moving all the way up to a 50x hybrid zoom if you wish – although this isn’t quite as good as the S20 Ultra’s “Space Zoom” feature. 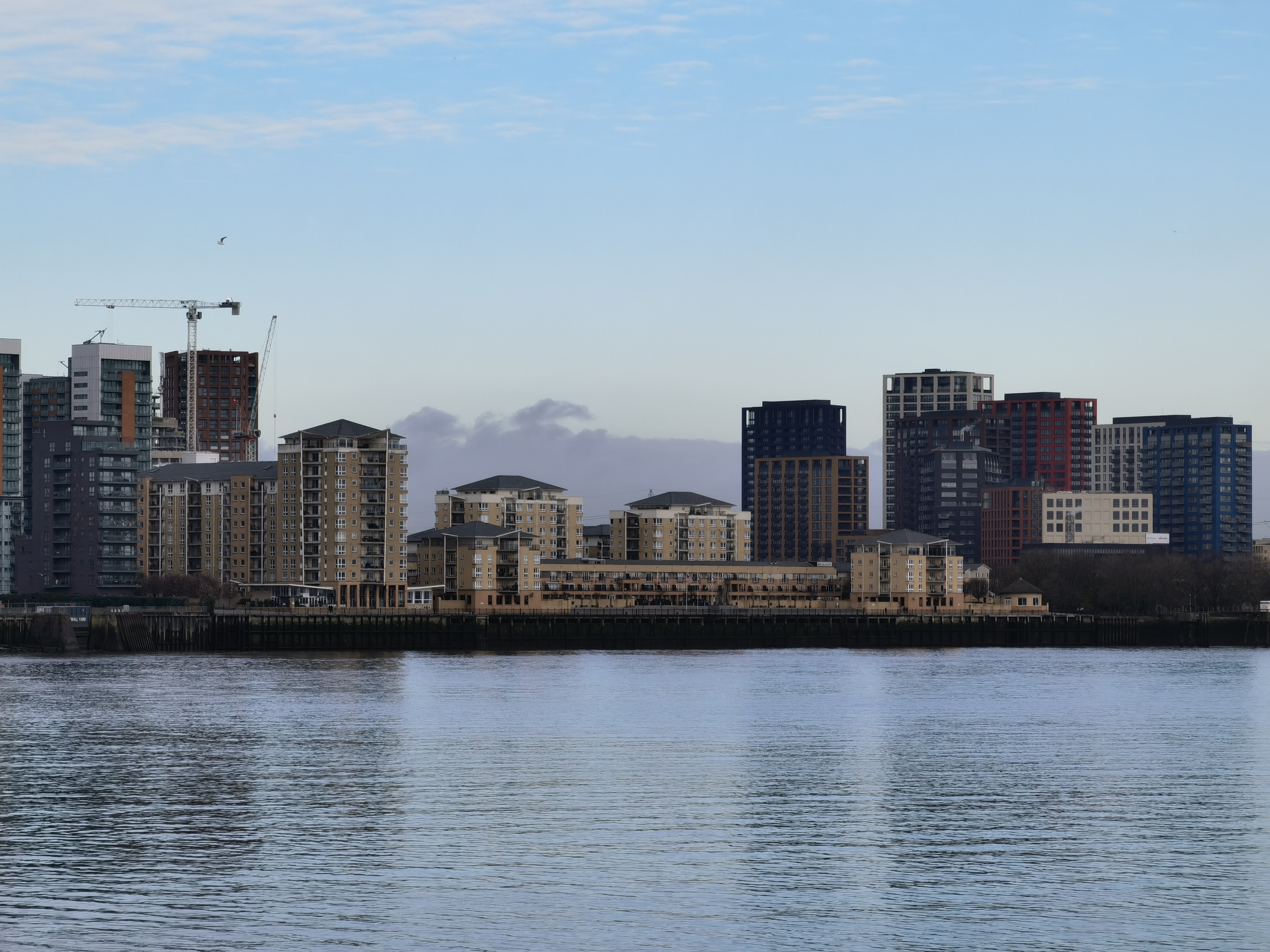 It also helps that, in some instances at least, these are among some of the best pictures I’ve ever taken on a smartphone. In particular, the ultrawide and zoom lenses (at 5x optical magnification) are rich with detail and I was especially impressed with how the Mate 40 Pro picked up the finer details in this image of a friendly coot swimming in the nearby canal: 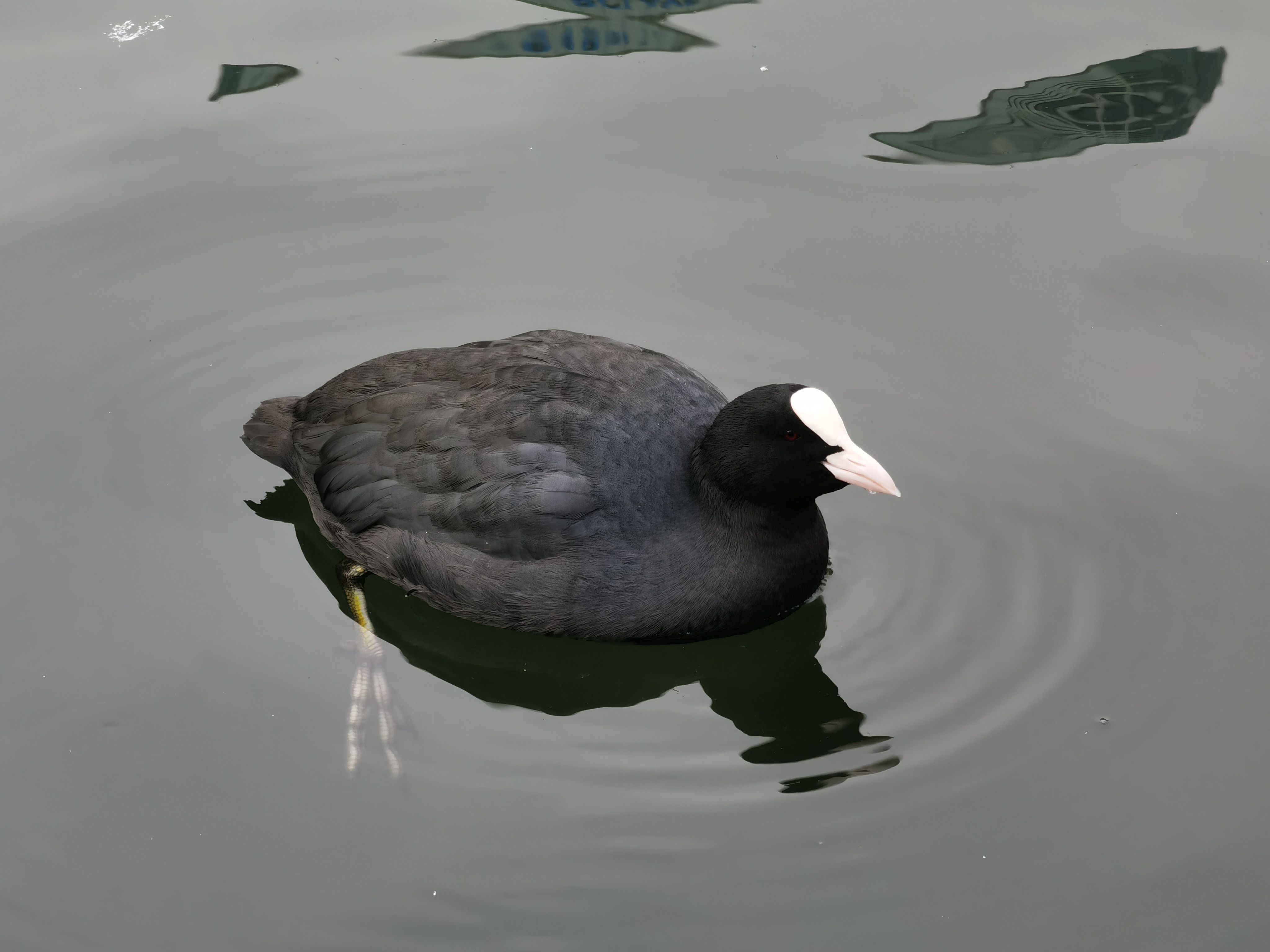 My only major criticism stems from the way in which the Mate 40 Pro handles colours. On more than one occasion, I would take a picture of the same scene twice, only to find that one image had more of a magenta tint than the other. This isn’t something that a brief bit of photo editing couldn’t fix, of course, and colour reproduction often boils down to personal taste anyway.

I’m also not a huge fan of the Mate 40 Pro’s auto exposure, which more often than not brightens the image by a noticeable degree, which meant that I frequently had to wrestle with the exposure slider in the camera app. Likewise, portrait mode images aren’t quite as defined as the same pictures captured on the iPhone 12 Pro:

The Mate 40 Pro’s video credentials remain unchanged from last year, which means you’re yet again able to capture fully stabilised 4K resolution footage at 60fps, although it lacks HDR and Dolby Vision recording. I have no complaints in this department, either, since the quality is equally superb and Huawei appears to have fixed the frame skipping issues of last year’s model, too.

A day might come when I don’t have to regurgitate Huawei’s software failings in every single review but in the case of the Mate 40 Pro, today is not that day. Huawei continues to find itself in an awkward position and, although it’s clearly trying to do its best at encouraging app developers to move to its own storefront, that’s not going too well. As I mentioned earlier, the current (UK specific) list is sorely limited and you won’t find any of the big-hitting social media platforms such as Facebook, Twitter and Instagram available for download, either. 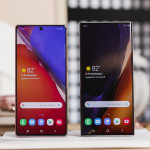 Samsung reportedly hasn't given up on the Galaxy Note line 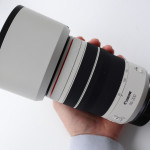 Don't miss a deal at Go Daddy
Best offers at Farfetch
Discounts, Sales and Deals at Newegg
Save your money with Nike DE
Online-Shopping with Marks and Spencer
Best products at Vimeo