As we edge closer to what’s expected to be the official Samsung Galaxy Note 20 reveal on August 5, new details about the upcoming device have started to emerge with some regularity.

The latest reveal come from reliable YouTube leaker Jimmy is Promo, whose latest video details what are said to be the Galaxy Note 20 Ultra’s advanced video recording settings, among other features.

Audio capture during video recording has also reportedly seen a pro-level upgrade, with the video revealing a new on-screen histogram, allowing users to keep an eye on sound frequency, along with the ability to adjust for omnidirectional, front and rear audio recording.

Along with the aforementioned video and audio recording options, the leaked video details a number of other interesting features that are reportedly make their way to the upcoming Galaxy Note 20 range.

A closer look at the Galaxy Note 20 Ultra’s camera app reveals up to 5x optical zoom capability, and 50x digital zoom, which seems more reasonable than the excessive (and rather blurry) 100x zoom functionality boasted by Samsung’s Galaxy S20 Ultra.

The video also details a new ‘scene describer’ feature within the Bixby Vision app which apparently allows users to “capture a scene” and then “hear an audio description of it,” which sounds pretty impressive if true and opens up a whole new world of accessibility advantages.

A look at the phone’s alleged dropdown menu also reveals a new Nearby Share feature, which we imagine to work in the same manner as Apple’s AirDrop, along with what appears to be the rumored wireless DeX feature we reported on last week.

As legitimate as the video appears to be, there’s still a chance that at least some of these features may not make it into the final product. That said, we’ll know for sure when the Galaxy Note 20 Ultra is (presumably) launched next month.

The phone has also been spotted through the US FCC (Federal Communications Commission) further alluding to things we’ve seen leaked in the past like a Qualcomm Snapdragon 865 Plus chipset and 5G mmWave support. 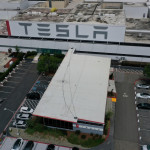 Tesla's next Gigafactory is being built in Austin, Texas 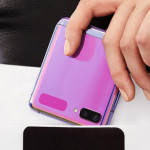 Don't miss a deal at Go Daddy
Best offers at Argos
Discounts, Sales and Deals at EBay DE
Save your money with Farfetch
Online-Shopping with H&R Block
Best products at Carphone Warehouse