Lenovo’s ThinkPad range rarely ventures into the realms of desirability like some other laptop brands. With the possible exception of its top-of-the-line X1 Carbon models, the sort of words that come to mind when ThinkPads are mentioned include “dependable”, “solid” and “reliable” – the sorts of words you might use to describe a faded, but favourite, pair of jeans.

This is the category the Lenovo ThinkPad T14s falls comfortably into. Its matte-black livery and ThinkPad logo, complete with glowing red dot on the ‘i’, bring to mind business laptops of old while its deep-travel keys and bright red rubber trackpoint recall a time when men were men and laptops weighed as much as a breeze block.

Don’t be fooled by this laptop’s banal veneer, though. Beneath the T14s’ corporate exterior, lies a machine that’s as usable, powerful and loveable as the shiniest of its shiny rivals.

Lenovo ThinkPad T14s review: What you need to know

The Lenovo T14s may fall into the business laptop category but you don’t have to be an IT director to purchase or use one. It’s a perfectly good laptop for general use as well.

It has a 14in, 16:9, Full HD display, just like many of its consumer rivals (there’s a variety of options here, including a touchscreen), and aside from the staid black colour scheme, there’s nothing that should stop you buying one over a Dell XPS or Apple MacBook Pro. In fact, with a three-year carry-in warranty, there are arguments for buying a T14s in preference to one of its consumer rivals, especially if you plan on relying on it for working at home.

The laptop comes with either 8GB or 16GB of RAM and either a 256GB, 512GB or 1TB PCIe SSD for storage, depending on the model you choose. This being a laptop designed for professional use, all models ship with Windows 10 Pro 64. 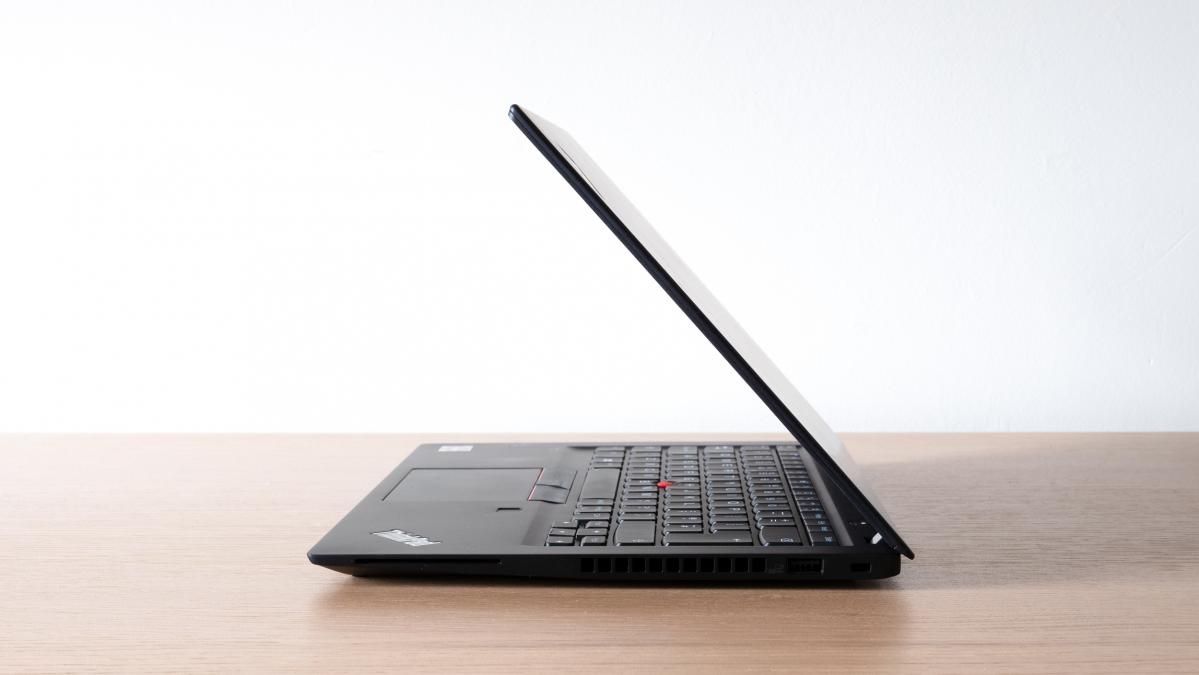 As for alternatives, our favourite lightweight business-focussed laptop is currently the HP Elite DragonFly. It comes with a smaller 13.3in touchscreen (although it is 4K resolution), is even lighter than the T14s and is almost as nice to use. It also comes with a three-year warranty. It’s pricey, however, and HP is set to replace it with a new model for 2021.

When it comes to consumer laptops, there are plenty of well-priced options in the T14s’ price bracket. Our current favourites are the two new Apple M1-based MacBooks – the M1 MacBook Air and the M1 MacBook Pro 13in, which cost from £999 and £1,299 respectively.

It might not be as attractive as most of these rivals but there is a certain appeal to the ThinkPad T14s’ no-nonsense, matte-black chassis. It might look like it’s made of plastic, but the T14s is, instead, constructed from stiff, sturdy magnesium alloy and coated in a slightly rough-feeling black paint that sparkles subtly in the light.

There’s no doubt that this is a machine dedicated to a life on the office desk, however. For such a light and slim machine (it weighs a mere 1.27kg and is 16.1mm thin), there’s a stack of physical connections. On the left edge is a pair of USB-C ports, one USB-A, a docking port and a full-size HDMI connector next to a 3.5mm headset jack. On the right edge is another USB-A port, a Kensington lock slot and an (optional) smart card reader.

With an Intel AX200 wireless adapter adding Wi-Fi 6 and Bluetooth 5 – and the option of Cat16 4G – on the Intel models for on-the-go internet access, this laptop has all the connectivity bases covered too. 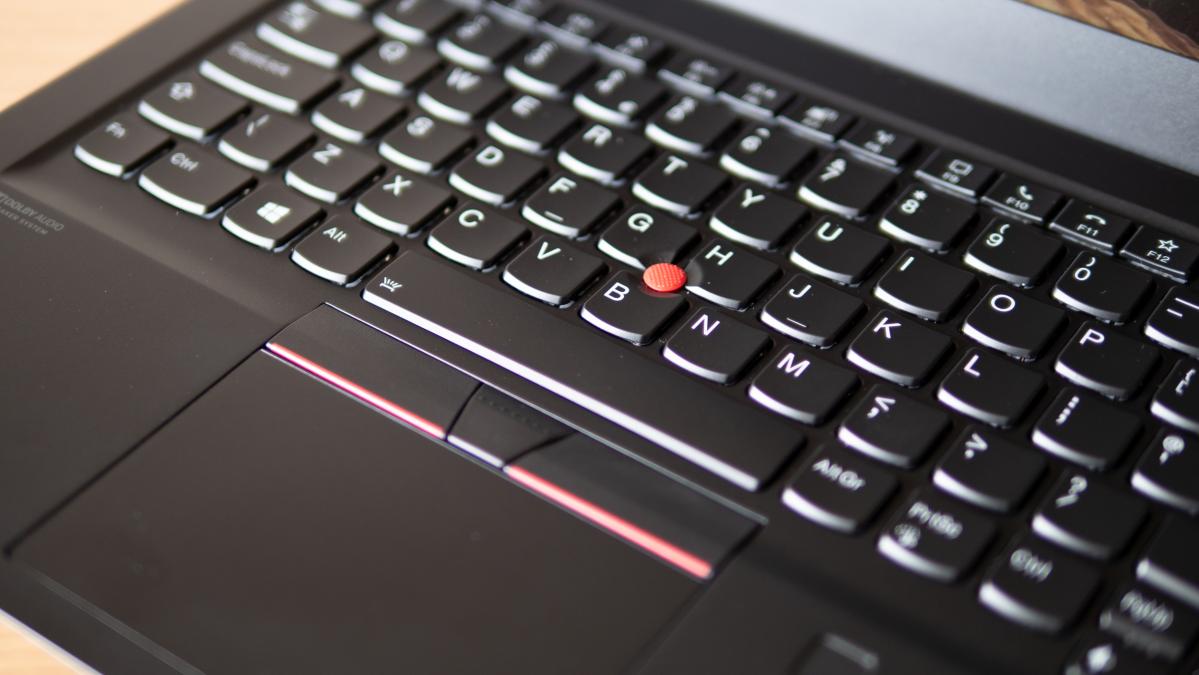 Flip open the lid and you’ll see a plethora of work-friendly features. There’s a fingerprint reader set into the wristrest, just to the right of the touchpad, while those familiar with ThinkPads of old will also appreciate the red trackpoint in the centre of the keyboard.

Anyone who regularly has to make video calls while working at home might be pleased to hear that the ThinkPad T14s has a series of call-specific shortcut keys ranged along the top of the keyboard, in place of the usual media control buttons. There’s also a microphone-mute shortcut key attached to F4 and a physical privacy slider for the laptop’s 720p, Windows Hello compatible webcam for those times when you want to be invisible. 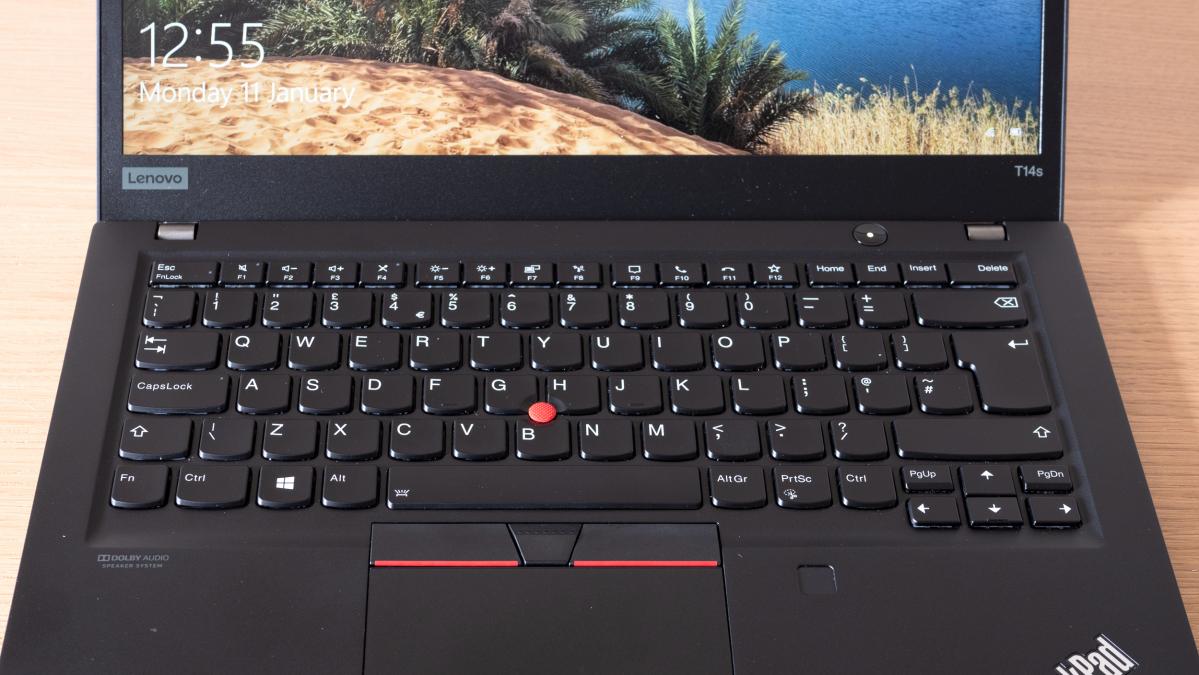 It’s a shame that video quality isn’t better, though. For a laptop of this calibre, I was expecting something rather crisper than the soft, mushy image the T14s delivered. Audio quality is better, however: the speakers are clear and don’t distort when you push them, although there isn’t much in the way of body. The microphones are also decent and are sensibly positioned to each side of the webcam so there’s no danger of obscuring the microphone with your hands or clothes while you’re on a call.

The keyboard is the star of the show, however. It has loads of travel – much more than most ultraportable laptops – and there’s a super-plush break to each keypress. Combined with a good solid base, subtly convex key tops that cradle your fingertips beautifully and spacing that keeps typos to a merciful minimum, you’ll struggle to find a better keyboard on any laptop anywhere. The only grumble I have is that the position of the left CTRL key isn’t in the corner of the keyboard and so takes a bit of getting used to.

The type of display differs depending on the model you choose. The review model on test has the “low-power”, non-touch display, which Lenovo says has a peak brightness of 400 nits. There’s also a 4K display, available via Lenovo’s build-your-own option. It’s still a non-touch option but offers slightly higher peak brightness levels of 500 nits.

Whichever display you go for, however, you’ll find it a highly practical screen. The anti-glare matte finish is very good at keeping distracting reflections at bay and high brightness levels mean it should remain readable in most conditions – even outdoors in bright sunshine. 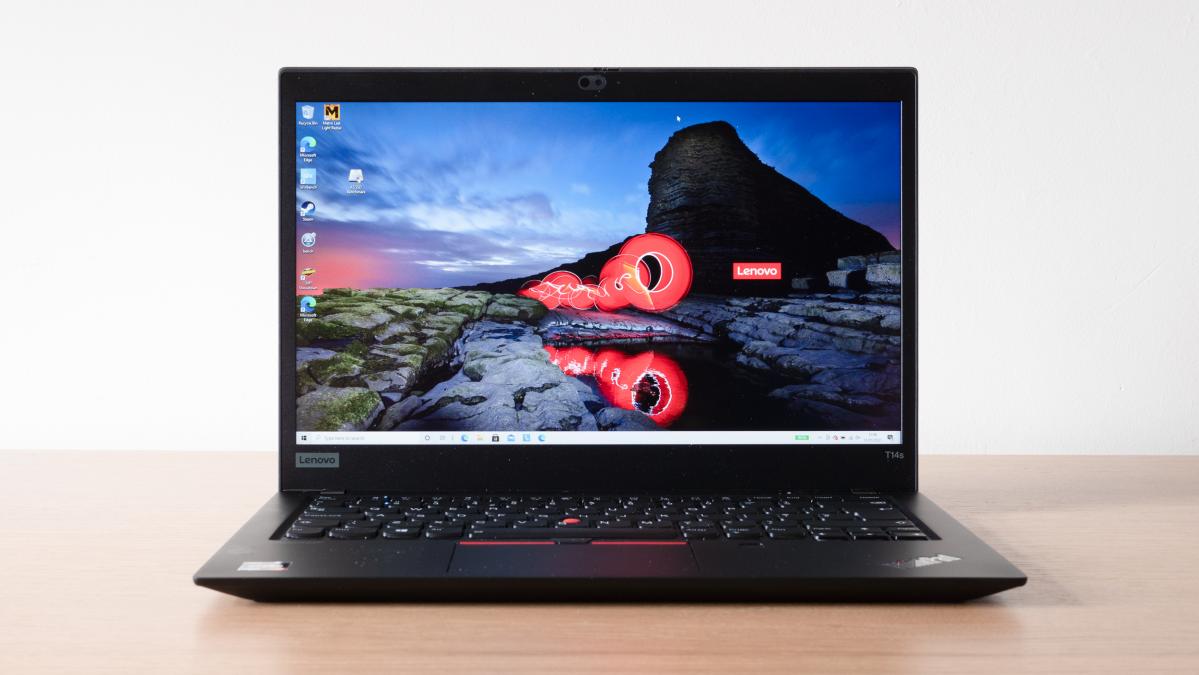 I did initially miss having a touchscreen but that soon faded and even the lowish 1080p resolution wasn’t too much of a bother. At this screen size, the pixel density is 157ppi, which means the pixel structure becomes impossible to make out at distances of around 56cm or so away. For most people, that’s around the normal viewing distance for a laptop display.

In testing, I measured peak brightness at 371cd/m2 (nits and cd/m2 are interchangeable measurements) and a contrast ratio of 1,671:1, both of which are impressive figures. sRGB coverage was pretty good, too, at 92.6% (out of a total colour volume of 95.7%) although colour accuracy, at an average Delta E of 2.83, was nothing to write home about. The M1 MacBook Pro laptops deliver not only a wider gamut of colours but they’re also more colour accurate, and Dell’s XPS 13 has a nicer display as well.

Nonetheless, for the average user, the Lenovo ThinkPad T14s’ screen should prove perfectly adequate. Indeed, its matte finish and anti-glare coating is probably more useful to the average laptop user than having a slightly better colour accuracy.

A few short years ago seeing an AMD CPU in what is ostensibly a corporate laptop would have been unthinkable but times have changed. Our review unit was supplied with the top-end AMD Ryzen Pro 4750U, a CPU that competes head to head with Intel’s mobile Core i7 series of CPUs.

The AMD CPU more than holds its own, particularly in multitasking workloads where you’re asking the laptop to do more for longer. In our 4K media benchmarks, the toughest section of which sees the laptop carrying out image conversion, video conversion and 4K video playback tasks simultaneously, the AMD Ryzen Pro 4750U streaks out in front of the competition. (Note: in this test, the MacBook Air benchmark isn’t directly comparable as it was run under Rosetta 2 emulation.) 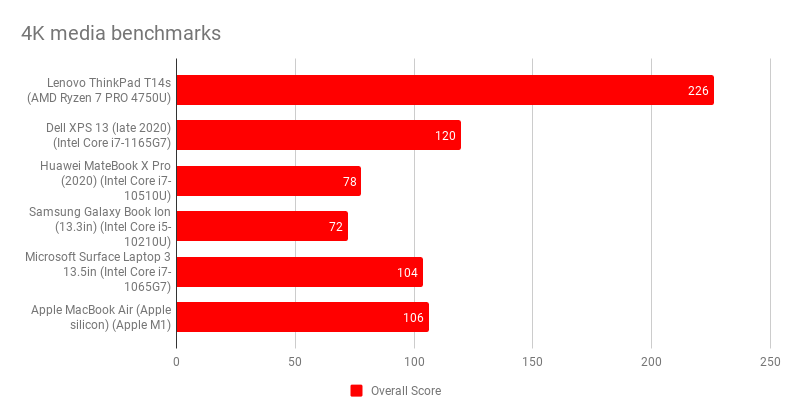 In shorter high-intensity benchmarks, such as the GeekBench 5 CPU test, the difference is less pronounced with the AMD CPU outperforming the Dell XPS 13’s 11th gen Core i7-1165G7 in multitasking but falling behind it for single-threaded tasks. 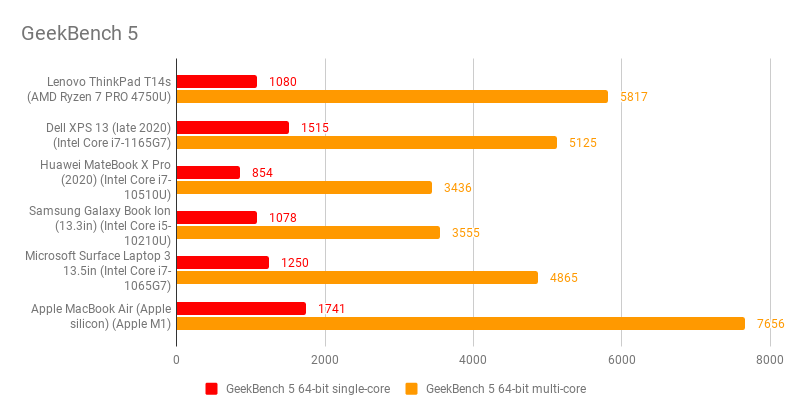 Likewise, if it’s the odd bit of after-work gaming you’re interested in, then you might want to opt for a laptop with Intel’s latest integrated graphics instead. Although the AMD RX Vega 7 graphics in the Ryzen Pro 4750U are faster than the 10th gen Iris Plus in the Samsung Galaxy Book Ion and Microsoft Surface Laptop 3, they aren’t up to the same level of performance as the Iris Xe graphics in the 11th gen chips. 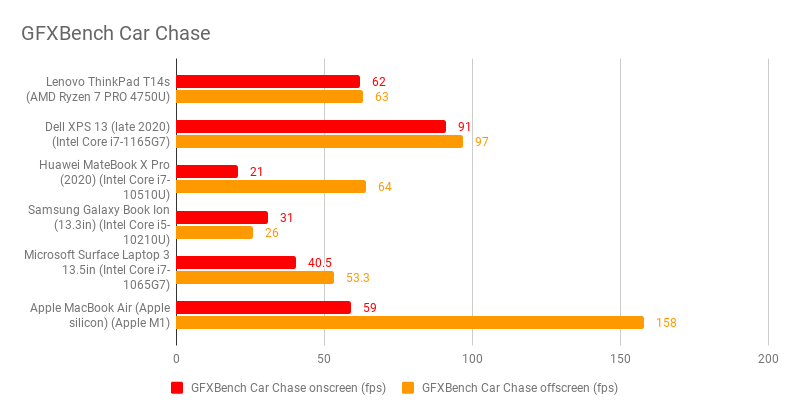 And while battery life from the 55.6Whr battery is fine, it falls significantly short of the best. In our video rundown test, the ThinkPad T14s lasted 7hrs 19mins before needing to recharge. Again, this isn’t as good as the Dell XPS 13 and it lags significantly behind the Samsung Galaxy Book Ion and the new M1 MacBook Air and m1 MacBook Pro 13in as well. 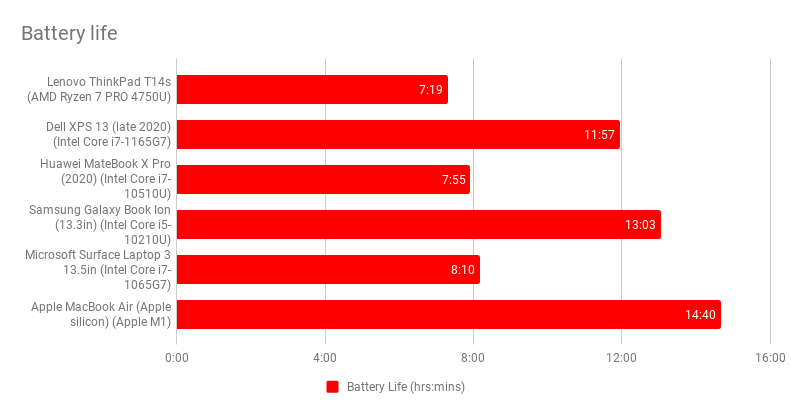 All that adds up to a laptop that may be competent across the board but fails to excel in any one particular area.

Performance is excellent under sustained load but it’s not significantly better than the latest 11th gen Intel Core i7-powered Dell XPS 13 and battery life is weaker than its big rivals, too. For corporate types, however, it is better value than the business-grade HP Elite Dragonfly, and there’s a plethora of configurations to choose from too.

If you’re in the market for any laptop for any purpose at around the £1,000 mark and above, then you’d be doing yourself a huge disservice not to put the M1 MacBook Pro and MacBook Air laptops at the top of your list. They’re much better all-rounders than the ThinkPad T14s and better value too. 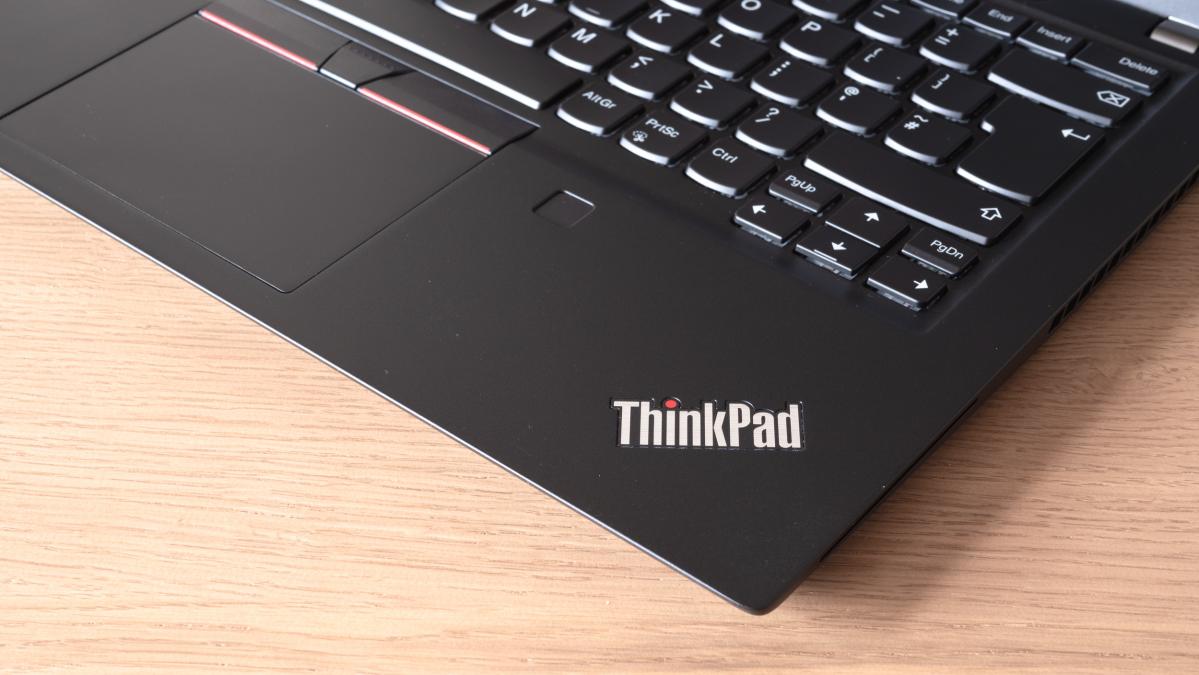 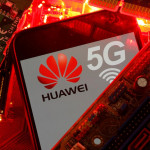 Don't miss a deal at Bodybuilding
Best offers at Newegg
Discounts, Sales and Deals at O2 Mobile
Save your money with Virgin Media
Online-Shopping with Go Daddy
Best products at Brian Tracy