Beneath the surface, however, it’s utterly, completely different. Thanks to the new Apple M1 Chip, it now has more in common with smartphones than with the Windows laptops it competes against. And yet, somehow, despite shaking everything up, Apple has still managed to produce a laptop that not only competes on a level playing field but leaves its rivals in the dust.

Of course, the M1 Apple MacBook Air isn’t the only laptop Apple has upgraded with the M1 chip, but it has to be the star buy. In fact, at £999 for the base model, it’s the best laptop of 2020. That’s because it takes most of what makes the M1 MacBook Pro so brilliant and crams it into a cheaper, leaner, quieter machine.

Indeed, with the same Apple M1 chip in charge of things, the MacBook Air is pretty much as fast as its Pro stablemate. So what are the differences? 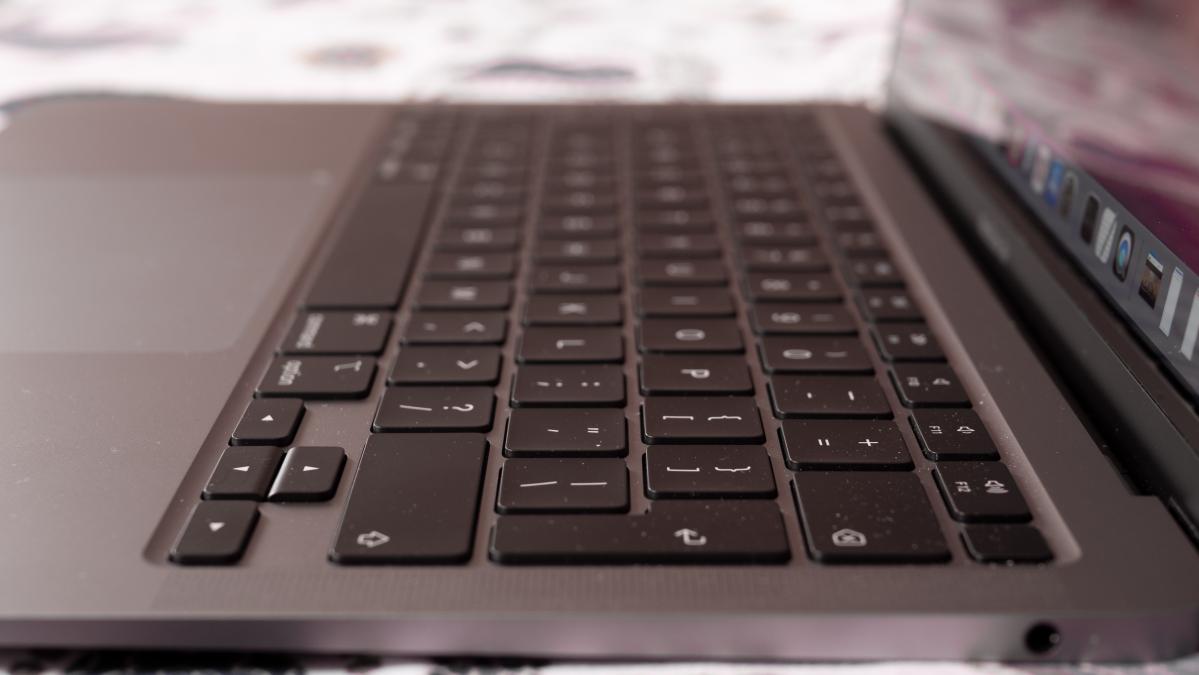 The big advantage the Pro has over the Air is the battery, which is bigger and lasts longer. Less immediately obvious is that the Pro has a fan, where the Air is completely fanless, although whether this is an advantage or a disadvantage depends on your preferences.

The Pro also has a slightly better display and better microphone system, and it comes with the Touch Bar control system running along the top of the keyboard.

The biggest difference, however, is the price. Starting at £999, the M1 MacBook Air is significantly cheaper than the MacBook Pro, which starts at £1,299. The base model, which I was sent to test, also comes with the same amount of storage (256GB) and RAM (8GB) as the lowest-spec MacBook Pro.

I’ve sketched out the key differences above, but it’s also worth noting that this cheapest variant of the MacBook Air comes with a seven-core GPU instead of the eight-core one in the base MacBook Pro. You can get the Air with an eight-core GPU, but prices for that start at £1,249, at which point you may as well move up to the MacBook Pro.

As for Windows competitors, there are plenty, but none get close to the MacBook Air’s combination of price and performance.

Our favourites in 2020 include the new Dell XPS 13, which comes with 11th-gen Intel silicon but costs significantly more, with prices starting at £1,399. We also love the Samsung Galaxy Book Ion 13.5in – which starts at £1,249 for the 13.5in model, has great battery life and the one of the best screens we’ve ever seen on any laptop – but that comes equipped with a low-power U-series 10th-gen Intel Core i5 CPU.

Then there’s the Microsoft Surface Laptop 3. It’s a lovely machine: slim and light with a great display, and it starts at the same price as the MacBook Air, but the cheapest version comes with only 128GB of storage.

It’s clear the M1 MacBook Air is great value, then, but you wouldn’t know it from the design of the thing. Just like the previous MacBook Air, it’s built from a solid hunk of aluminium – finished in gold, silver or Space Grey – with the wedge-shaped profile that has become so familiar over the years.

The M1 MacBook Air gets the same Magic Keyboard upgrade that the M1 MacBook Pro does as well, which is a huge upgrade over the infamous butterfly switch keyboard of old, and its Force Touch trackpad is a joy to use. The main difference from an ergonomics standpoint is that it lacks the Touch Bar strip above the keyboard. I can live without that, though. 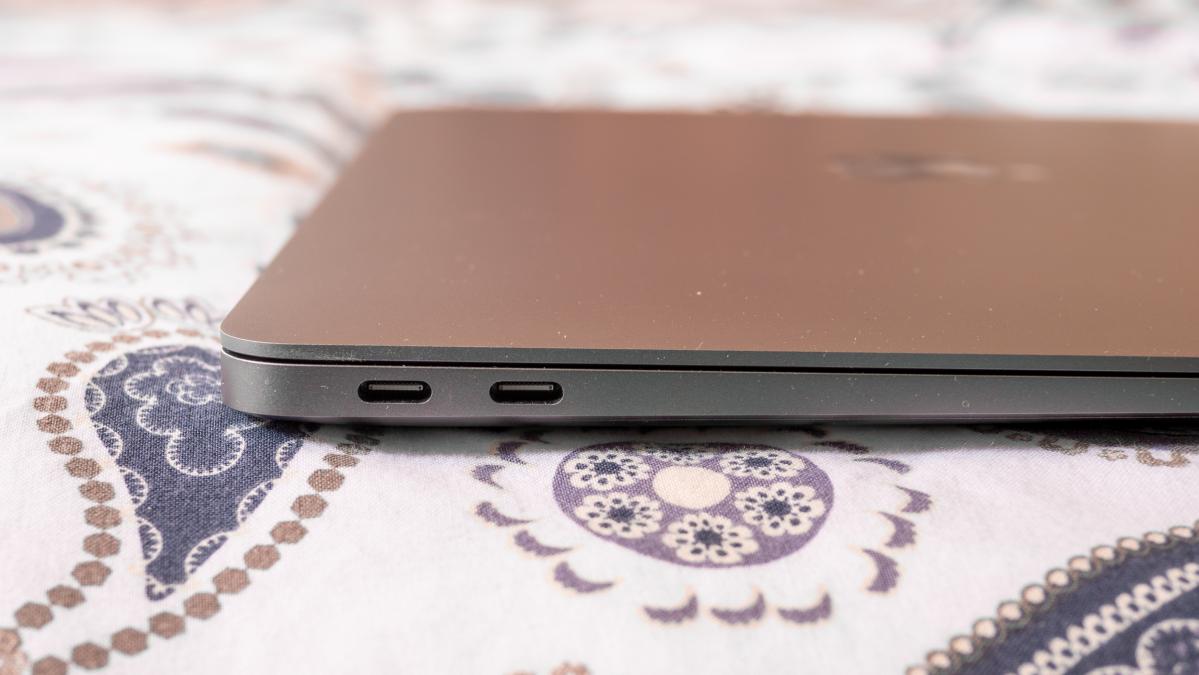 It’s pretty much the same when it comes to connectivity, too, with a pair of Thunderbolt 4/USB 4 ports on the left edge, and a 3.5mm headset jack on the right edge. As for wireless connectivity, you get Wi-Fi 6 and Bluetooth 5 but, disappointingly, no 4G or 5G. Cellular connectivity isn’t even an option on the M1 MacBook Air. Maybe next time?

Surprisingly, Apple hasn’t held the MacBook back when it comes to the display, either. It’s rated at a slightly lower peak brightness than the Pro at 400nits (compared with the Pro’s 500nits), but otherwise it’s just as capable.

It covers the same wide P3 colour gamut and the resolution is an identical 1,680 x 1,050. It performed brilliantly in all our technical tests, too. 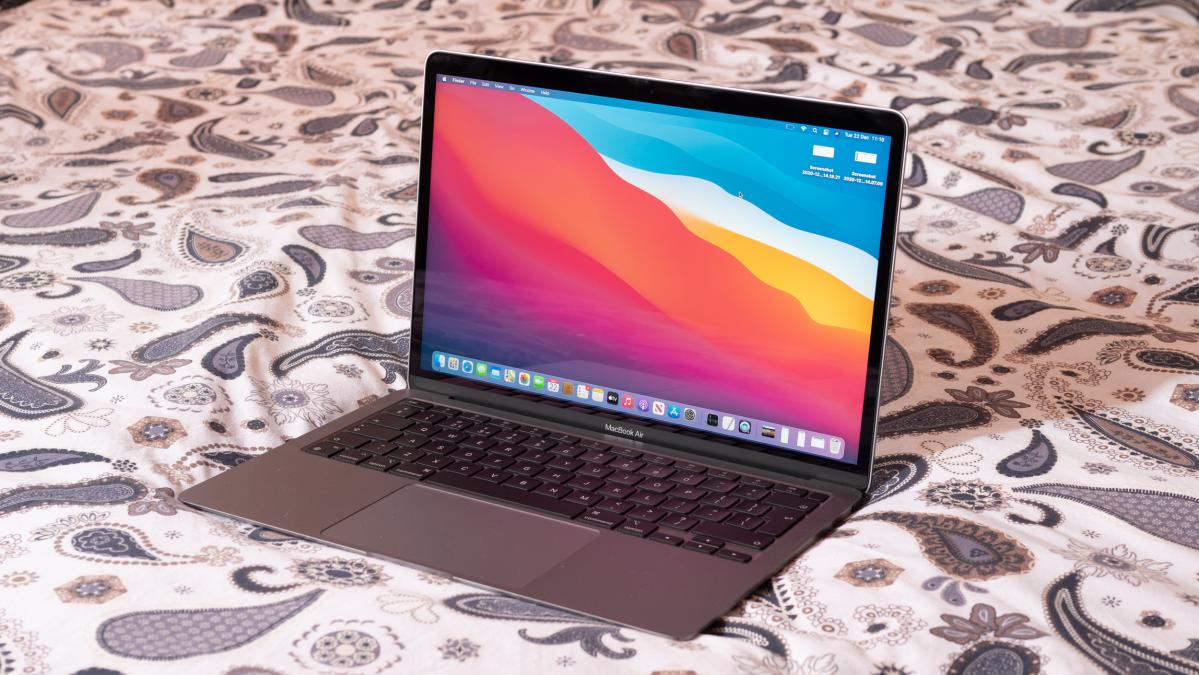 In testing, I found the display could reproduce an impressive 98.7% of the DCI-P3 colour space, while peak brightness reached 414cd/m2 (equivalent to the same in nits) at a contrast ratio of 1,034:1. Colour accuracy was beyond reproach, too: within the sRGB colour space I measured an average Delta E colour difference of 0.95 and it was 0.97 for Display P3.

In short, this is a fabulous display, capable of reproducing a greater range of colour at impressive accuracy than most of its Windows rivals and is especially well suited to photo and video editing. 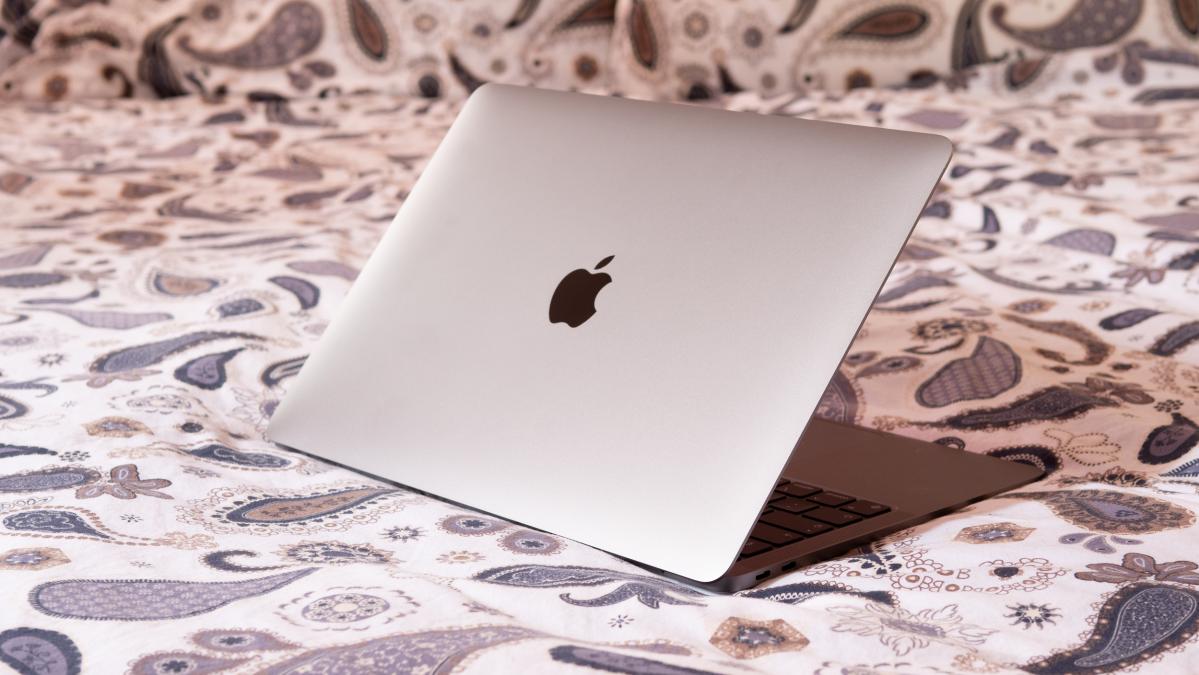 In a normal year, there’s quite a big difference between the performance levels of a MacBook Air and a MacBook Pro, but with the same chip powering both, there are effectively the same levels of power in the cheaper and pricier machines.

And that means the MacBook Air is lightning-quick on its feet. The Apple M1 chip inside the MacBook Air is accompanied by 8GB of RAM in our review unit and in the various cross-platform benchmarks it put in a spectacular performance, outperforming its Windows rivals and mostly matching the MacBook Pro 13. It only fell behind in the graphics-heavy GFXBench tests, which is understandable, given the model on test has one fewer GPU core: 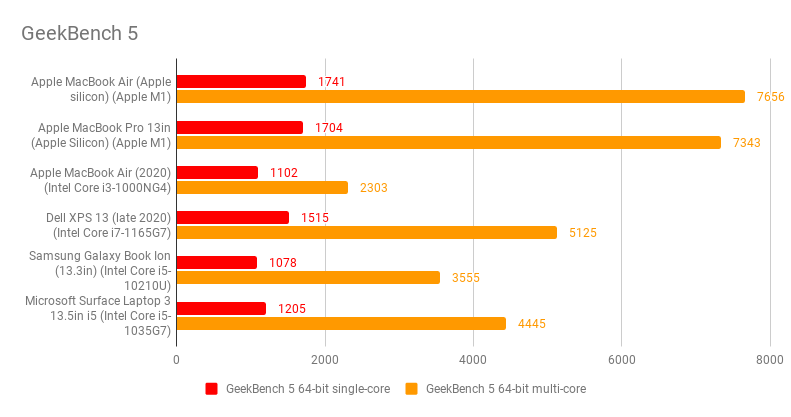 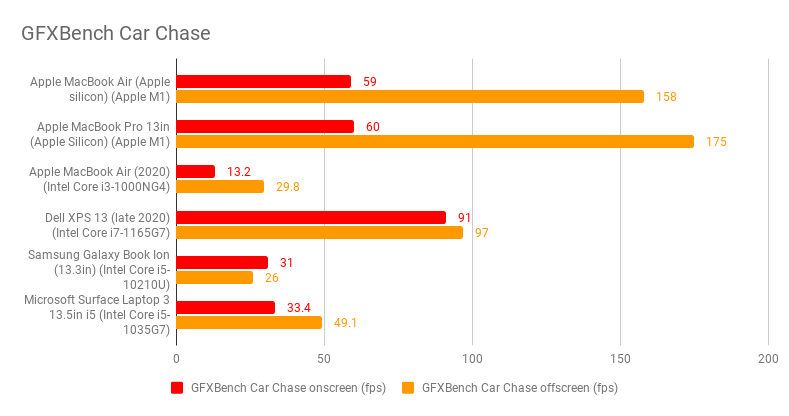 Apple said at the launch that the M1 Air won’t be able to sustain these levels of performance for as long as the M1 MacBook Pro, due to its lack of active internal cooling, and that does appear to be the case.

You can see this in the result for our in-house media-focused benchmarks below, which place a sustained load on the hardware for a longer period than the Geekbench 5 or GFXBench tests above. Note, however, that these benchmarks are running under Rosetta 2 so they’re not strictly comparable with results from Windows 10 machines, or the results from previous Macs. They’re still pretty impressive, though, despite that handicap: 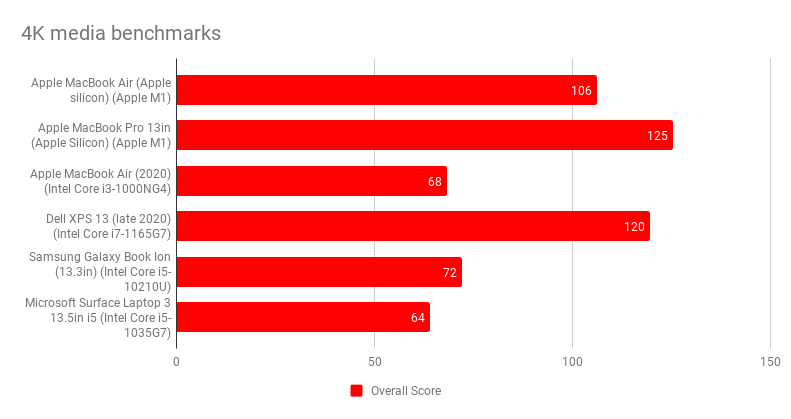 The flipside to this slightly inferior performance under sustained load is that the MacBook Air runs completely silently with none of the irritating fan whir that afflicts so many rival laptops.

Battery life is simply superb as well. In our video-rundown test, with the display set to a brightness of 170cd/m2, the laptop put in flight mode and the keyboard backlight disabled, the MacBook Air lasted an impressive 14hrs 40mins. That’s not as good as the MacBook Pro, which lasted 17hrs 31mins, but it’s still very, very impressive. 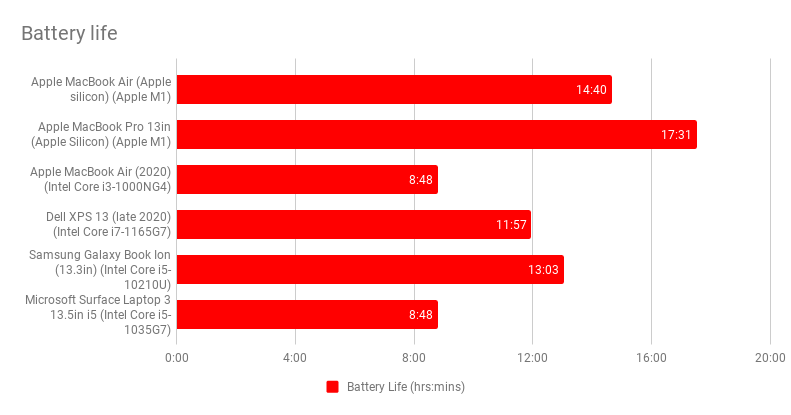 Of course, performance isn’t the whole story. With a shift away from Intel to an ARM-based chip design, any software you want to run on the laptop has to be recompiled to run natively on the M1 chip.

This doesn’t mean you won’t be able to run applications that haven’t been converted, though. Thanks to Apple’s Rosetta 2 runtime, the MacBook Air can run legacy software by converting code on the fly. There’s a little performance impact to doing this, naturally, but for most apps you won’t notice much of a difference. 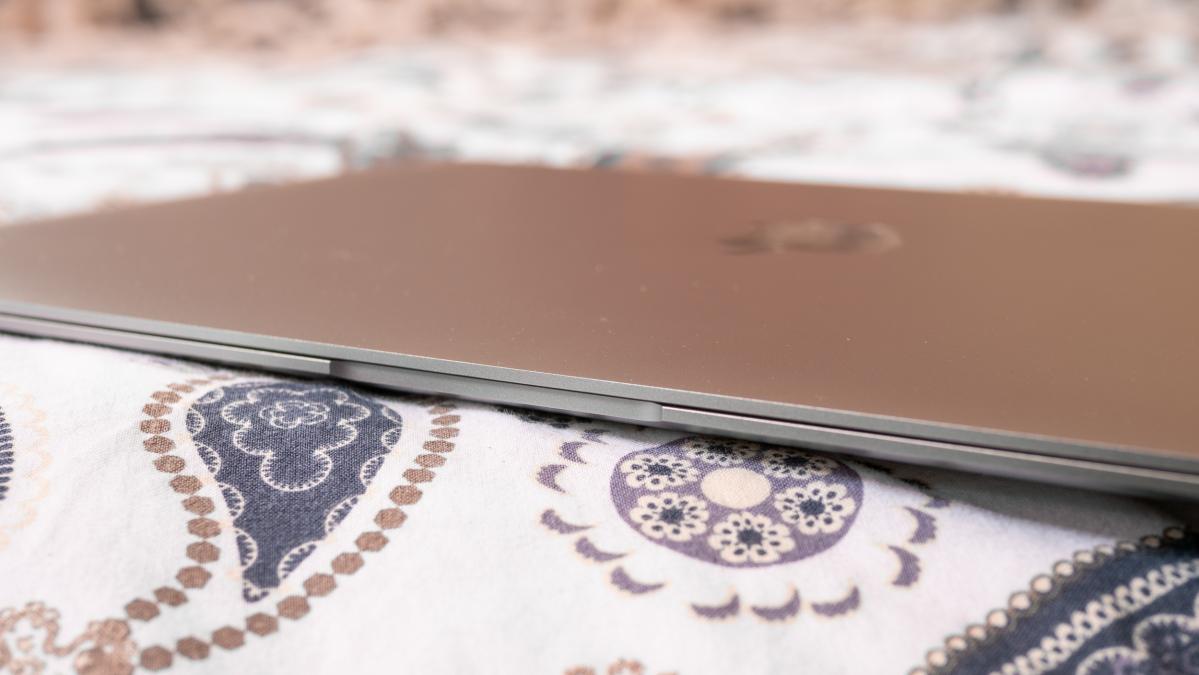 The good news is that a significant number of big developers are already releasing native M1 versions of their software, so you won’t have to run your apps on Rosetta 2 for long: Adobe has released a native M1 version of Lightroom already and Photoshop is coming early next year; Microsoft has released an M1 version of Office 365; Google Chrome is mostly M1 native now; and DaVinci Resolve for M1 is out as well.

Apple itself is the most prolific, as you’d expect, converting all of its productivity apps to native code and its professional creative apps as well, including Logic Pro and Final Cut Pro.

No two ways about it, it’s a stunning debut for Apple’s ARM-based M1 MacBook Air.

Not only is this laptop stunningly fast, quiet as a mouse and reasonably priced, but it’s also a completely practical laptop for most people and delivers excellent battery life to boot. 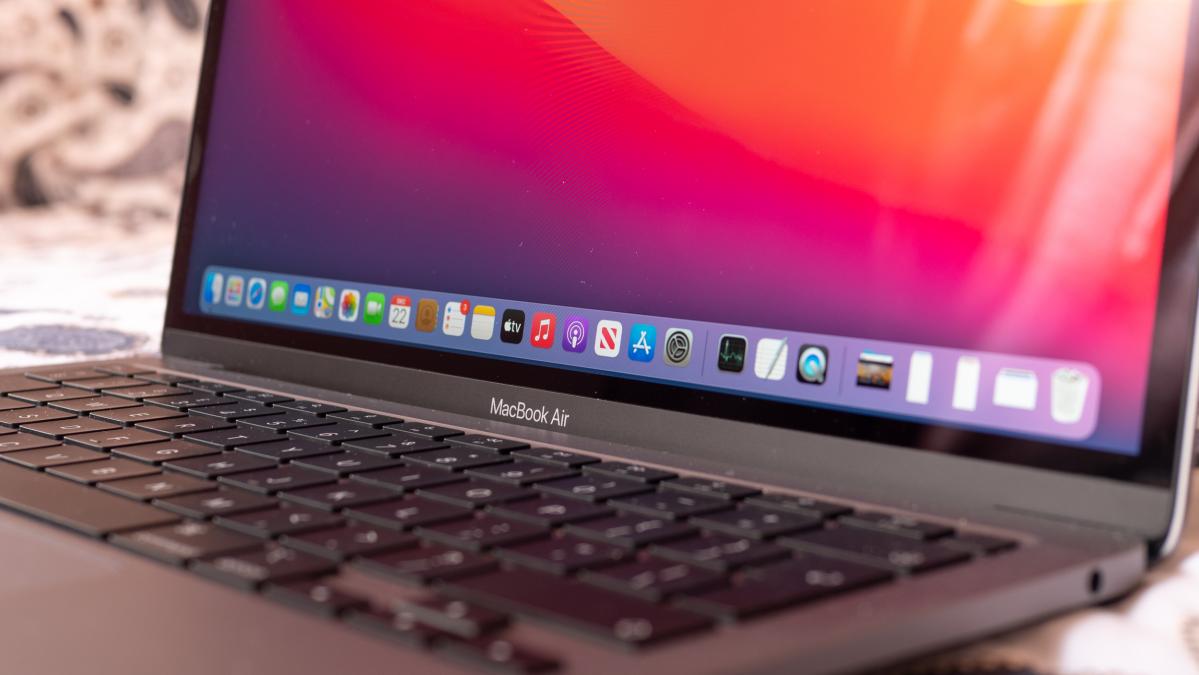 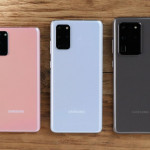 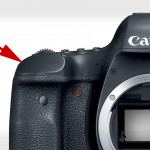 Canon Has Created a Shutter Touchpad to Replace the Shutter Button

Don't miss a deal at Argos
Best offers at Argos
Discounts, Sales and Deals at Mobiles
Save your money with Groupon
Online-Shopping with House of Fraser
Best products at Intuit Small Business