A massively overpriced device that ticks many of the survivability boxes, but delivers very little that a typical user might expect from a modern tablet.

Tablet computers designed for use outside the office environment are big business, based on just how many different models Panasonic makes.

They range in size and specification, but their latest FZ-L1 Toughbook is marginally larger than a phablet and aimed at those who occasionally get wet, dusty or are proficient at dropping things.

But with a significant price tag, does it represent a solid investment?

There are two basic models of the FZ-L1, a Wi-Fi-only one, and our review model, which also includes a mobile comms package with HSPA+, GSM and LTE capability. 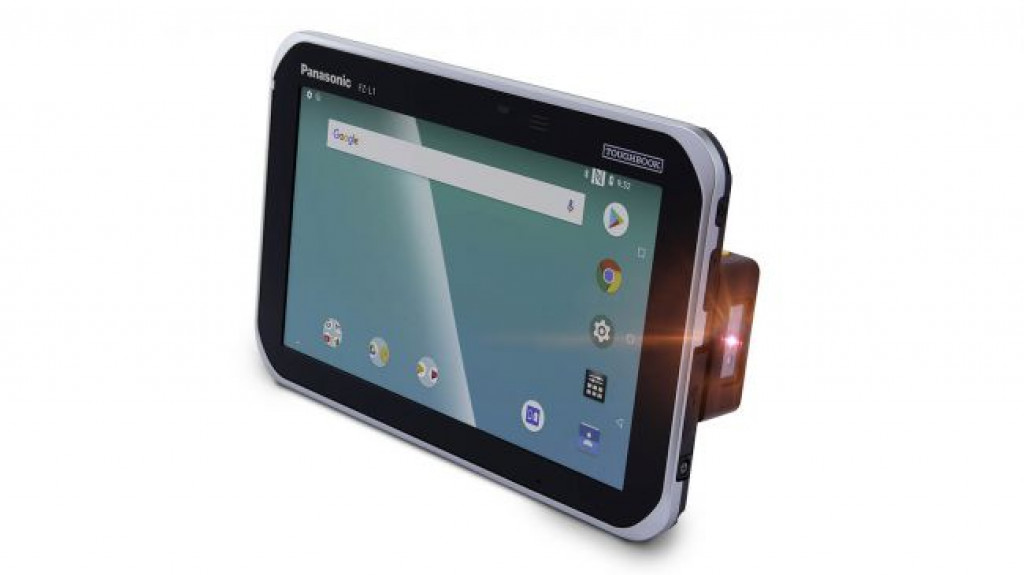 In addition to the machines, Panasonic also makes a wide range of accessories, including a bar code reader, various mountings, straps, extra batteries and battery chargers. These aren’t cheap either, with the 5-battery charger costing about the same as an Apple iPad Mini.

The Toughbook FZ-L1 has three regional variations with slightly different mobile comms tailored to the US, EMEA and Australia.

Dollar pricing in the US is roughly a direct UK pounds to dollars conversion, though local sales tax may add to that cost.

The most obvious competitor for this device is the Samsung Galaxy Tab Active 2, that sports an 8-inch display, 3GB of RAM, 16GB of storage, and comes with 4G LTE as standard for only £439 MSRP, and can be found as low as £375. It might only be rated to a 1M drop (not 1.5M as the FZ-L1), but it offers better water resistance and has a larger capacity removable battery.

As you can buy four Samsung Galaxy Tab Active 2 tablets for one FZ-L1, the Panasonic machine appears massively overpriced in addition to being underspecified. 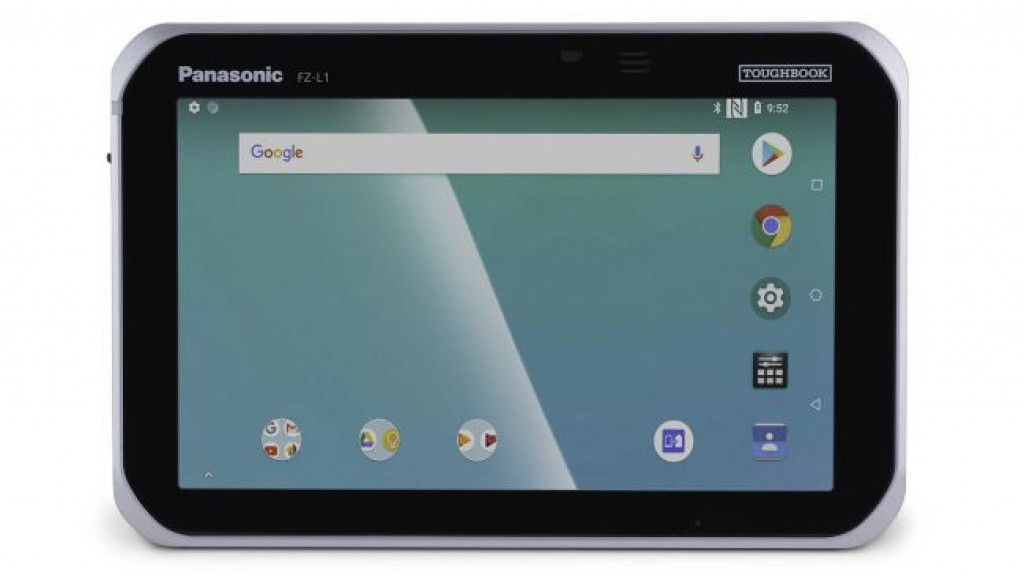 Android tablets are no longer an area which attracts much innovation, as they’re more about volume sales to the companies that still make them.

The Panasonic Toughbook FZ-L1 is designed to exploit a niche for mobile computing where people or businesses need devices that can handle being on a worksite, in the jungle, up a mountain, or anywhere where they might conceivably get dropped or wet.

Panasonic has a wide range of machines in FZ series, and the L1 is one of the smallest screens with only a 7-inch display. 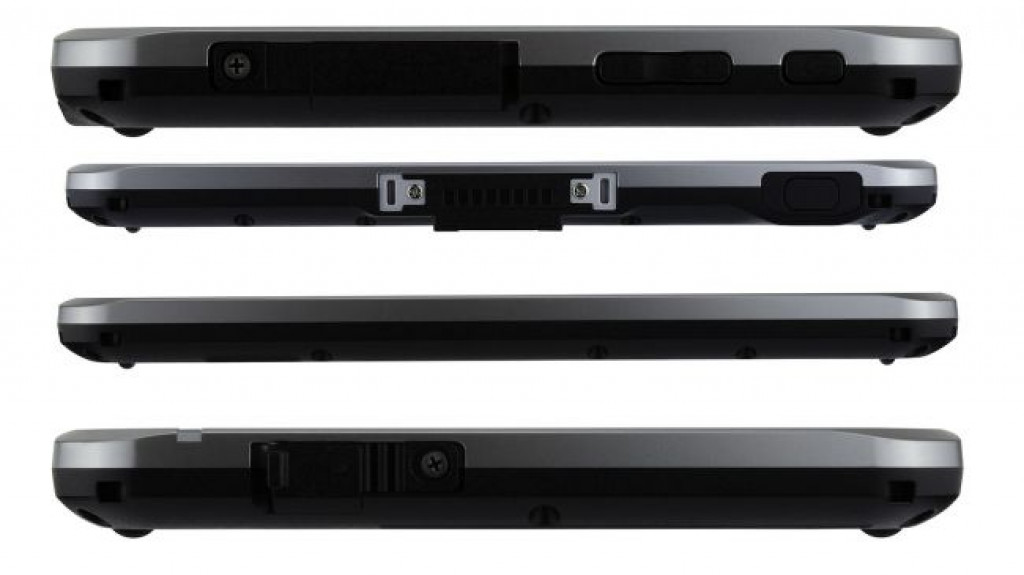 At 18mm thick, it’s a chunky black and silver ensemble that has ports around three sides and a removable battery module on the back. The battery is neatly double locked to avoid any unintentional power losses. 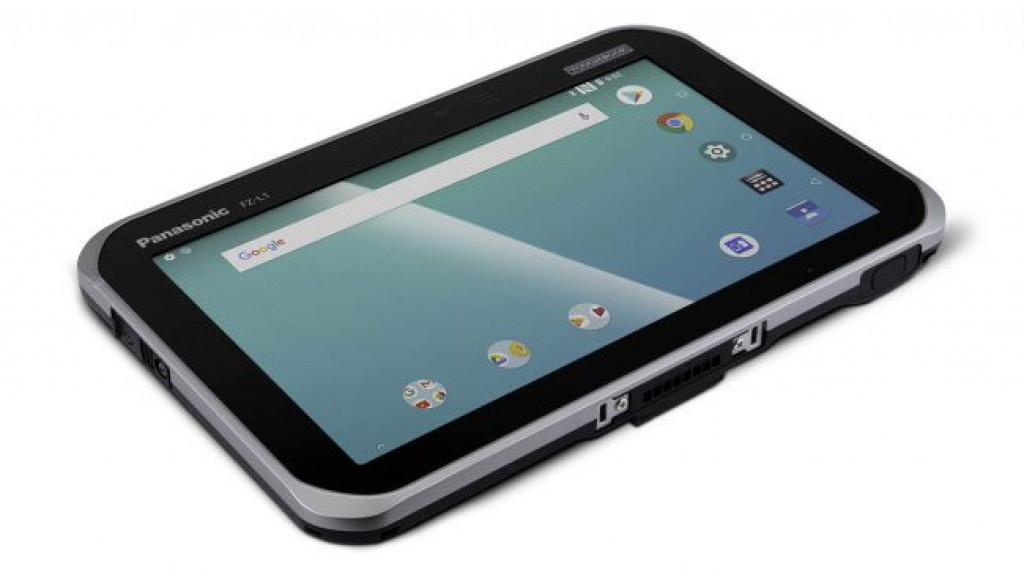 Along the bottom edge is a proprietary edge connector designed for an optional cradle that holds the unit firmly and is also used to rapid charge.

The battery is a Li-ion 3200 mAh unit and can be fully charged in 2.5 hours on the cradle or four hours using the micro USB port.

A charger is included, but a different one is required to get the rapid charging through the cradle.

One interesting aspect to the battery is that it is possible to swap it without powering down the device, using a special app that controls a ‘warm swap’.

A reasonable assumption is that activating this utility charges a capacitor that then keeps the machine alive as you take one battery out and place another (hopefully charged) one in?

Panasonic didn’t include a second battery, so we can’t say how well this works. And, it is worth pointing out, that without another optional accessory, the battery charger, you can’t charge the battery away from the tablet.

In the downloadable manual, Panasonic advises never to warm swap if you are very low on power, a limitation that undermines the usefulness of this feature in our opinion.

Despite the tough outer exterior, when you power this device on it’s the same vanilla Android 8.1 (Oreo) experience that you might get find on many tablets.

The screen is a relatively low resolution 1280 x 800 pixels, has a coating aimed at reducing screen reflection, and a 10-finger touch sensor that offers a glove and rain modes.

It’s not the best screen we’ve seen, as the colours are somewhat muted, and the touch sensor has swiping issues near the edge of the visible panel.

What doesn’t help this problem is that the screen has an unexpected lip that’s not anywhere near the sides of the device, making a clean swipe off the screen almost impossible.

Thankfully these aspects aren’t the major selling point of this device. It is the hardware’s resistance to unfortunate events, like ending up in water or being dropped. 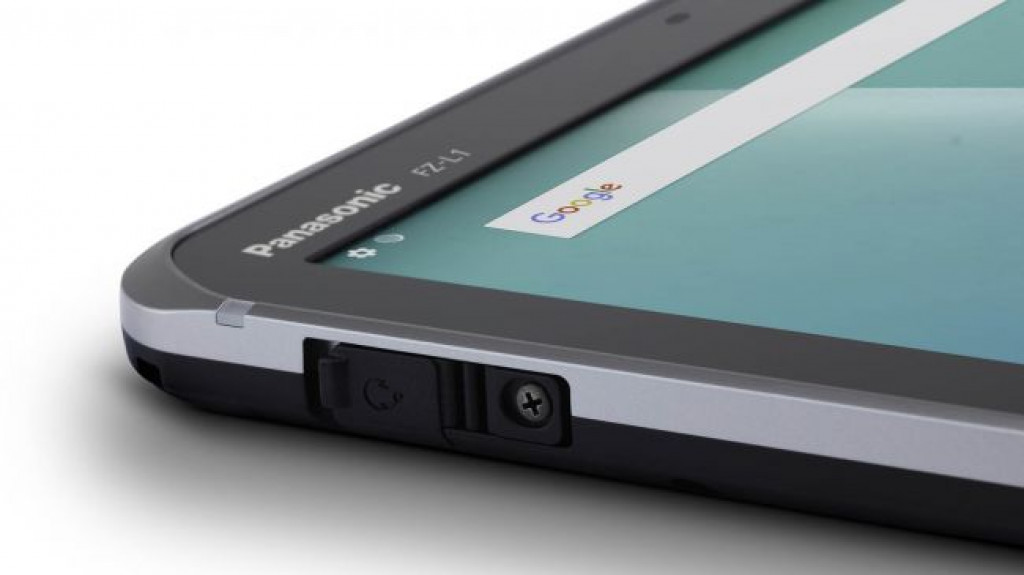 Like so many tough devices, much is made in the L1 brochure of the MIL-STD 810G certification. Except MIL-STD 810G isn’t a true standard, as the US military isn’t a standards body and doesn’t hand out certificates.

What MIL-STD 810G is, a series of tests that hardware makers aiming to sell into the military can perform to show what it can do. There are no rules which test or tests they perform, or even what results they should achieve.

These water and dust tests assume, not unreasonably, that the rubberised covers for the USB, audio jack are all undamaged and firmly in place.

If we owned this equipment, we wouldn’t be keen on finding the limits of these protections, and while operating the machine in the rain or a dusty desert is realistic, going much further than that is inadvisable.

This tablet won’t float, so hope that if it does get dropped into water that you find a shallow spot.

To be kind, the specification of the FZ-L1 is very basic and lacks many of the features you’d expect on a modern phone or tablet. The positive spin on this scenario is that given how long the SoC used here has been around, it should be very reliable.

By current tablet standards, it doesn’t have much power, memory or storage, although you can boost storage with a Micro SD card.

There is only one rear facing camera, but the 8MP sensor on this isn’t anything special.

Other disappointments include Wi-Fi that doesn’t offer an AC mode, there are no full-size USB ports, no USB Type-C and you can’t wirelessly charge it.

When we read the specifications and saw this tablet used the Qualcomm Snapdragon 210 MSM8909 processor, we assumed its performance would be mediocre. And testing underlined our assertions with a highlight marker.

The Snapdragon 210 is an entry-level quad-core Cortex-A7 design that Qualcomm launched back in 2015, has a maximum clock of just 1.1 GHz and a memory controller that interfaces to LPDDR2/LPDDR3 RAM up to 533MHz.

If you intend to use this device to capture data or browse web pages, then it will probably suffice, but anything that requires local processing could easily overload this platform.

Geekbench rated this system as equivalent to the Samsung Galaxy J2 and Cubot Note S on single core tests, and equal to the LG K7 for the multi-core challenge. Compute numbers are in line with the Huawei Y6 Pro and Samsung Galaxy A3.

Battery life is much the same as the 2014 era Sony Xperia Z3, and about half what you get from a Samsung Galaxy A3 (2017 version).

Most of these comparable devices are budget phones, and most are old enough to have been discontinued. The Huawei Y6 Pro is a new phone design but costs only £99 (around $125).

Some logic could be attributed to this choice if it was to reduce power consumption, providing a longer battery life.

However, we’d contest that a more modern and efficient octa-core design with variable core clocking would last longer with the same 3200 mAh battery.

To put that capacity in perspective and how the SoC can impact battery life, the Moto G7 phone costs $199, uses a Qualcomm SD632 octa-core CPU, has a 3000 mAh battery but can last over 15 hours, with a much higher resolution screen, double the RAM and four-times the storage. It can also fast charge in 15 minutes and get 9 hours of life from that.

Where Panasonic claims the single battery life of the FZ-L1 is up to 9 hours, but we didn’t get that long in our testing.

There are two takeaways from our tests; the first of them being that don’t expect this device to work as smoothly as a modern Android phone, even a cheap one.

And secondly, budget for extra batteries and a battery charger if you want any reasonable operating life away from power sockets. 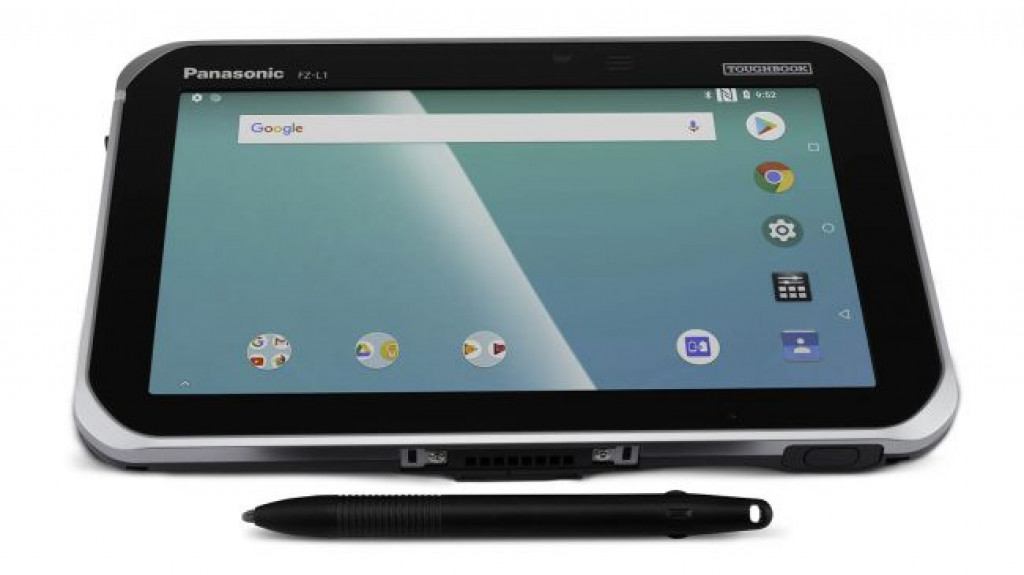 There is a disconnect here, where Panasonic have repackaged 2015 tablet technology into a tough case and forgot that the user experience isn’t based purely on the resilience of it to abuse.

Among the low points are a mediocre screen, an entirely lack-lustre CPU and GPU combination, small memory, limited storage and Wi-Fi that lacks AC class technology.

Other than its ability to withstand wet weather, being dropped and the LTE option, it has practically nothing about it that trumps a $150 tablet.

Even the warm-swap battery feature is undermined by the lack of capacity in the batteries, making it more of a necessity than a headline feature.

When you factor in the cost of the device, extra batteries, the cradle, cradle charger, five-day Battery charger (for five batteries) and hand strap, you could easily spend $2,500 or more on this device and accessories for a single deployment.

When you compare this with other tough tablets, it might be cheaper than the insanely expensive Dell Latitude 7212 (£2,042, around $2,600), but it is triple the cost of the much higher specification HP ElitePad G2 1000 and Samsung Galaxy Tab Active 2.

And, there are dozens of powerful Chinese phablets that cost $300-400 and offer even greater protection against water and dust and have 10000 mAh batteries.

The technology inside this machine does not come close to justifying the cost, even if you can drop it in frustration and expect it to keep working. 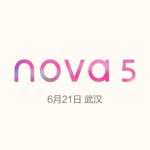 Huawei Nova 5, Nova 5i Launch Set for June 21 in China 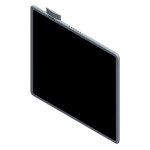 Don't miss a deal at Ancestry
Best offers at Newegg
Discounts, Sales and Deals at Nike DE
Save your money with Adobe
Online-Shopping with Microsoft Store
Best products at Myprotein