Professional esports players (or aspiring ones) will find much to enjoy with the Razer Blade Stealth 13 thanks to its solid gaming performance and 13 inch screen with a 120 GHz refresh rate. Just don’t expect groundbreaking performance numbers for resource demanding games released over the past few years.

The late 2019 Razer Blade 13 improves on the original, which Razer dubbed “the world’s first gaming Ultrabook.” But, everything including the compact design, system specs and feature set means this Ultrabook was designed for games that don’t demand high system requirements.

Where the Razer Blade Stealth 13 shines, is with esports titles and productivity – like video and photo editing. Just don’t expect to engage hardware demanding games and a battery life that’s up to Ultrabook standards.

The entry-level Razer Blade Stealth is equipped with a 13inch, 60Hz screen. From there, price increases depend on higher refresh rate, resolution and touch capability. At the highest $1,999 (£TK, AU$TK) price point, users will get a 60 GHz OLED Full HD touch display. For $100 less, the Razer Blade Stealth 13 comes in a 4K touch option. Though, you might want to stay away from the 4K touch option, which we’ll explain later.

The $1,699.99 model we got for review features a Full HD (1,920 x 1,080) at 120Hz display which is phenomenal for an Ultrabook. This is something similarly priced and specced 13-inch portables like the Macbook Pro or Surface Book. Both lack the same compact design, customizability options and ability to game with competitive refresh-rates. 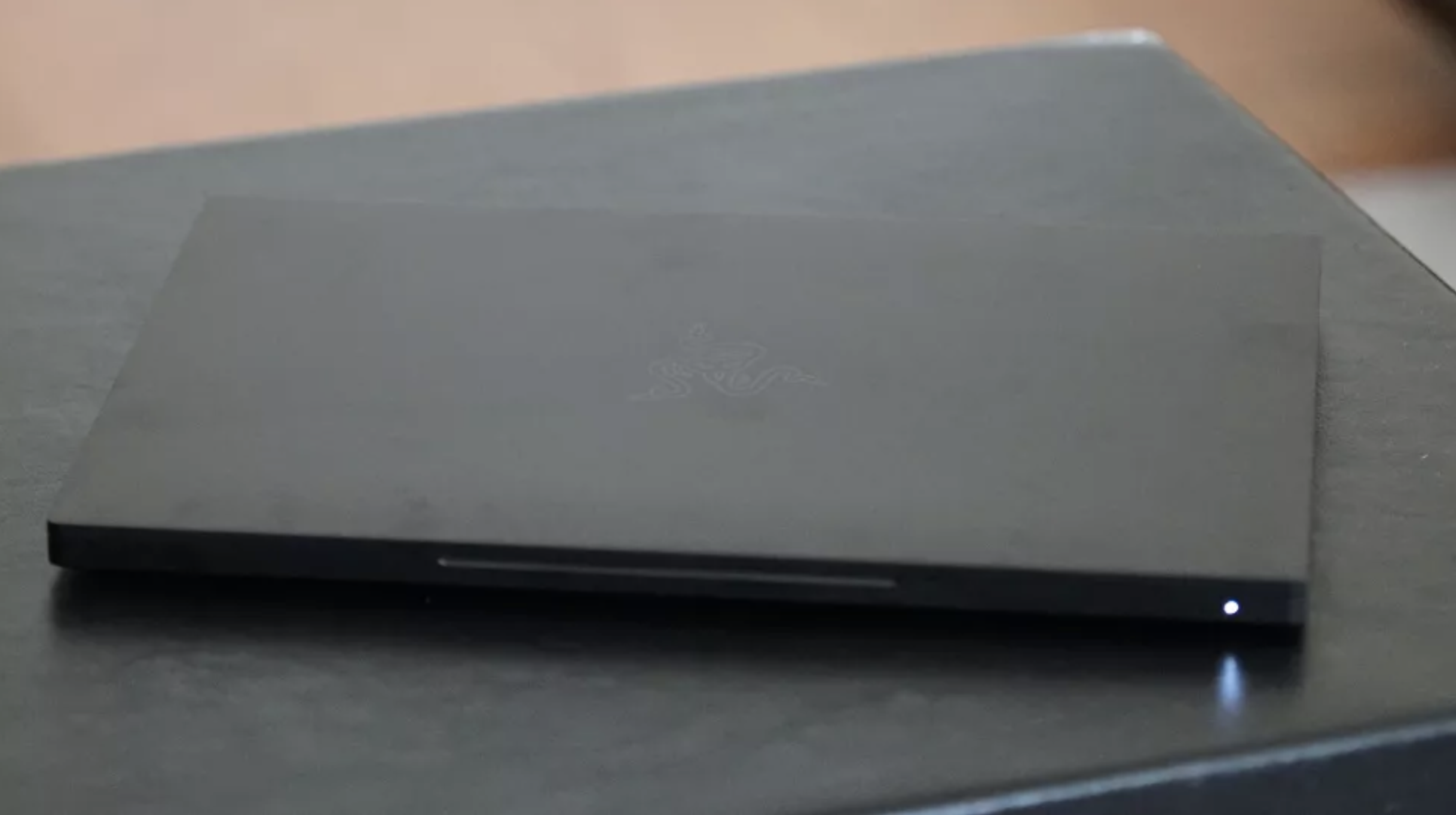 The Razer Blade Stealth 13 is an attractive piece of hardware thanks to the all-black aluminum design, featuring Razer’s signature green accents on its USB-A ports. The clean lines on this Ultrabook are simply beautiful. Plus, It’s light enough to hold in one hand and thinner than a dime when closed. 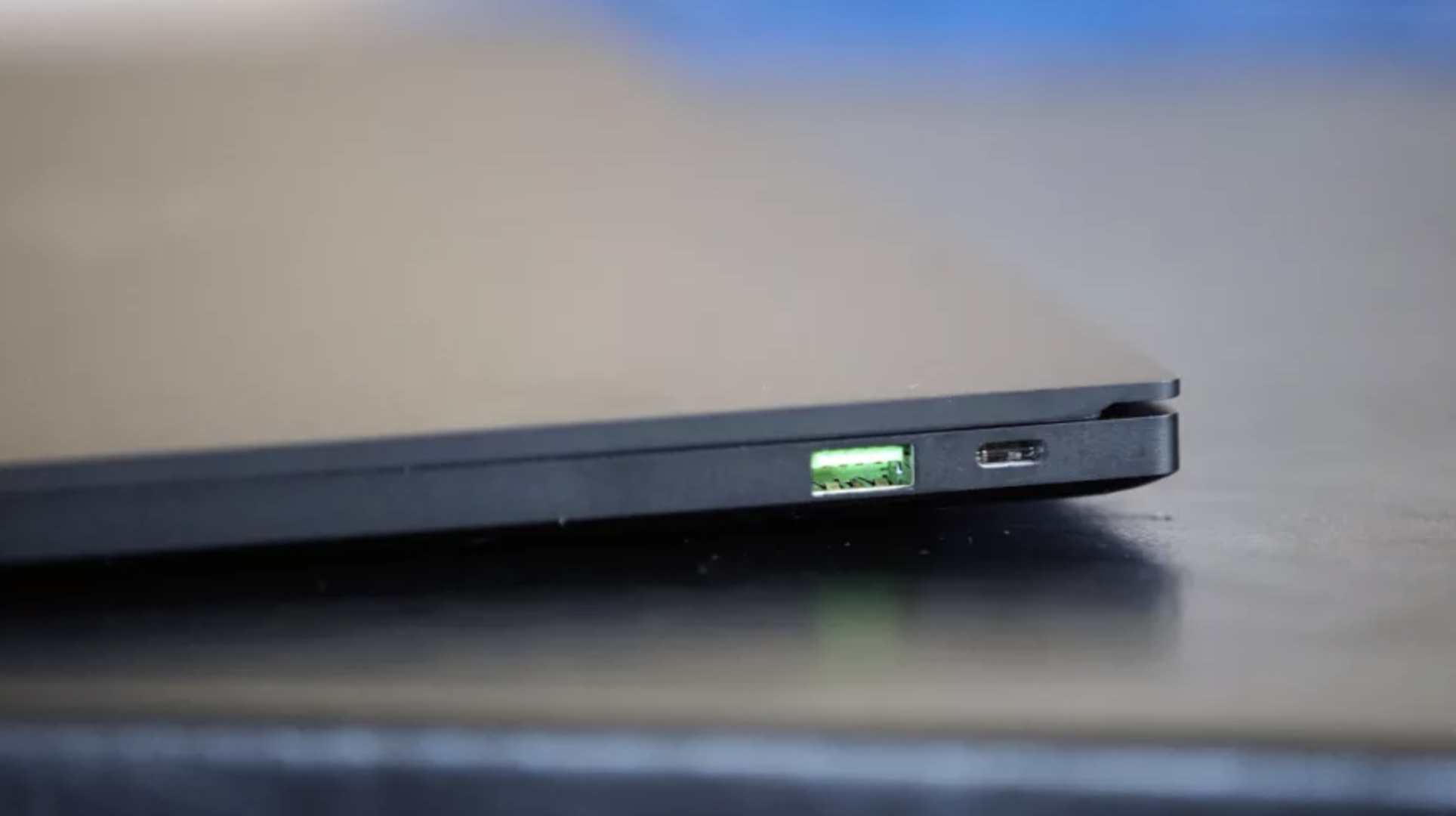 Besides housing one pair of USB-A and Thunderbolt 4 ports on each side, a singular 3.5 mm headphone/mic combo jack sits on the left. That should be just enough to use a mouse and headset. It’s just too bad there isn’t an SD card slot, considering Razer uses Lightroom in one of the promotional photos.

Though serious gamers will opt for a standalone mouse for gaming, the touchpad on the Blade Stealth 13 is smooth to the touch during general use. Pressing the touchpad in feels good – though you’ll likely still want to grab a mouse during serious gaming sessions. 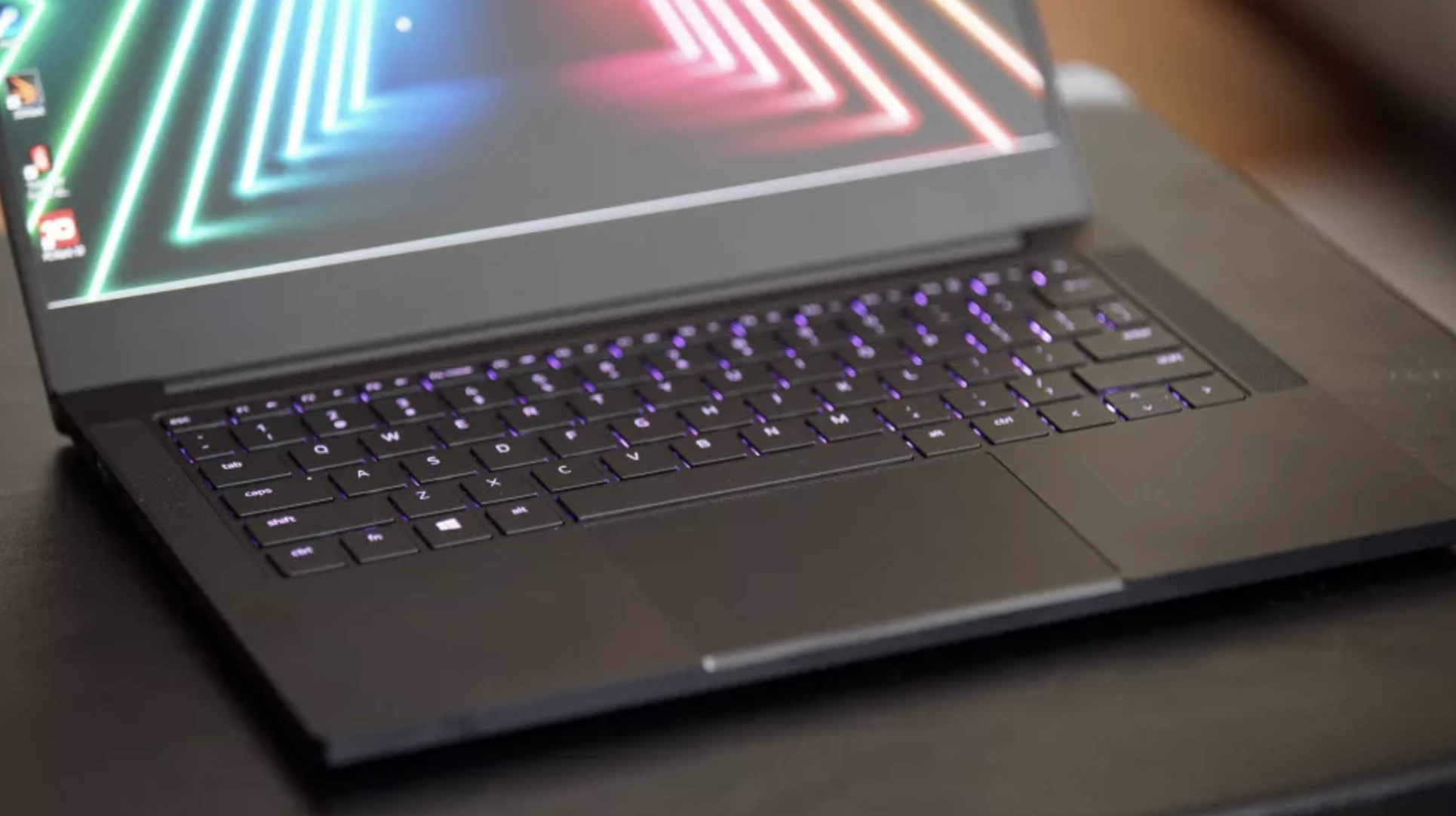 For a small Ultrabook keyboard wedged between two speakers, the keys are nicely spaced and it’s tactile enough that you won’t feel the need to grab a gaming keyboard Some may be disappointed that the RGB lighting doesn’t extend to individual keys, but there is still some lighting customization through Razer Synapse.

The Razer Blade Stealth 13 is rocking a 13-inch 120Hz display that hits 100% of the sRGB spectrum – and it’s gorgeous despite the bottom bezel featuring the Razer logo, which feels a bit distracting. Colors on the screen are rich with phenomenal detail from gaming to tasks like video editing or photo editing. Adding the high refresh rate makes games pop and definitely provides a competitive edge where it matters. There is a 4K 60Hz touch display option available for a couple of hundred dollars more, but considering the system specs are the same, 4K gaming is a no-go.

The 720p webcam performs well enough in an adequately lit room. Users who want to live stream games or attend Zoom meetings shouldn’t have much to complain about. It’s not the best webcam in the world, but at least the Blade Stealth 13 supports Windows Hello facial recognition – it just doesn’t work as well as other Ultrabooks like the Asus ZenBook 13. 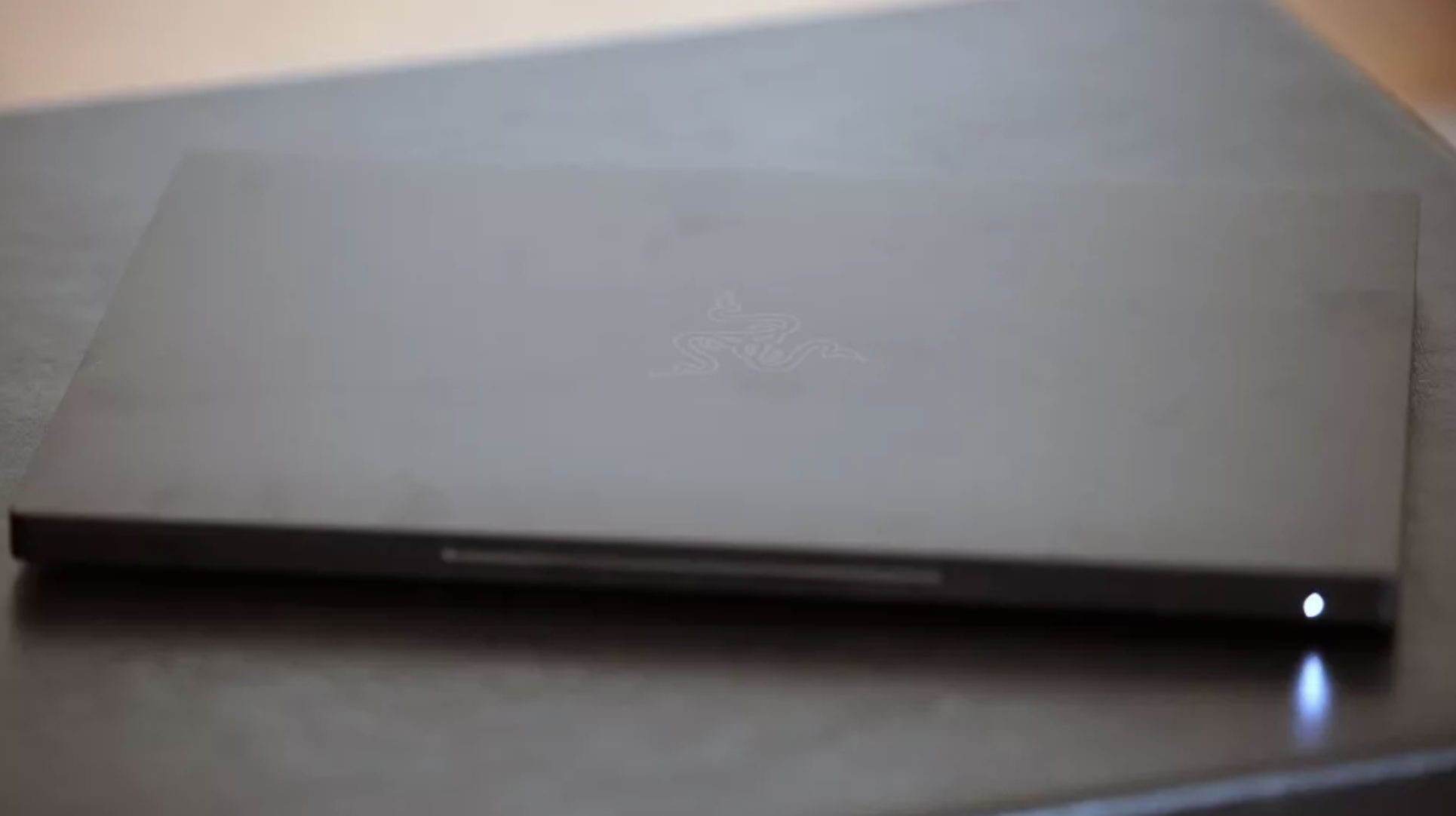 The Razer Blade Stealth 13 can run competition spec requirements of popular esports games like Fortnite and League of Legends – which is perfect for the 120Hz display. Considering most esports games don’t go beyond 100GB – unless you’re playing Call of Duty or NBA2K21 – the low storage isn’t really a problem either.

To reach that 120 fps frame limit, you’re going to have to mess with the graphics settings, though. So, if you’re looking to turn on all the eye candy or play beyond 1080p, you may want to opt for something bigger and more powerful. Running Total War: Three Kingdoms and Metro Exodus on ultra settings at 1080p yield average frame-rates in the low 20s. Even at the lowest settings, you’re still scraping by with around 80 fps – but at least that’s still playable.

Due to the weaker GTX GPU, advanced features like DLSS and Ray-tracing aren’t available. This means demanding AAA games like Death Stranding, Cyberpunk 2077 or Control aren’t going to impress on the Razer Blade 13. If you have the expendable cash, you can purchase the $299 (€299.99, AU$579) Razer Core X to push it further, but then you’ll also need to buy one of the better graphics cards – which can cost hundreds of dollars, so it’s probably best to just get a more powerful laptop.

An Ultrabook’s biggest test is its battery life.Though improvements have been made, battery life is still merely average. In the PCMark 10 battery life test, it lasted nearly 10 hours and our local video playback test was around the same with almost 9 hours of life. Attempts to play games like Metro Exodus and the Razer Blade Stealth 13 will only last about an hour and a half. If you’re travelling across the country, you should be able to breath easily, just as long as you’re not trying to play games. Luckily, it also charges quickly with the USB-C charger that Razer includes.

There are also a handful of performance settings through Razer Synapse. Plugged in settings are split between “Balanced,” Battery Saver” prioritizing battery life and “Gaming” which prioritizes graphics processing power. Fan speed can be adjusted as well from 2500 RPMs to 5600 RPMS. Even at its highest setting, the ultrabook is still relatively quiet. Prolong usage doesn’t leave an uncomfortable hot lap feeling either. Software and features

Through Synapse, there are several ways to personalize your experience outside of RGB lighting. Each individual key on the keyboard can be fully customized with macros and you can even set keys to launch programs. Users can even adjust RGB lighting profiles for when the Blade Stealth 13 is plugged in or not. Of course, if you want to take your RGB customization experience to another level, you can utilize Razer’s Chroma Studio.

The Blade Stealth 13 is packaged with THX Spatial Audio for both the external speakers and headphone output. This is perfect for using gaming headsets in games that require positional audio and communication. The four speakers and smart amplifier sound crisp and clear, just don’t expect much in the volume or bass department. In a moderately loud room, a lot of the fine detail in the audio dissipates easily. There’s also a separate Spatial Audio application to further refine one’s audio experience between pre-EQed settings like gaming, audio and film alongside custom EQ settings. It doesn’t match Razer’s own THX Spatial Audio, though.

You want a light portable with quality build

The all-black unibody chassis made of high grade aluminum not only looks good, but can take a slight beating.

You require a portable that provides esports performance and general practicality

The speakers are fairly average but this Ultrabook was made with gaming headsets in mind. Having THX Spatial Audio built in is quite the treat for competitive gaming.

You want a portable with significantly more power

Games like League of Legends or Rocket League will work fine on the Blade Stealth 13. More visually challenging games like Cyberpunk 2077 or Doom Eternal may have to run with severe compromises.

You require a better battery

For an Ultrabook, having serious battery life is essential. The Stealth 13 can barely handle 10 hours of general usage. 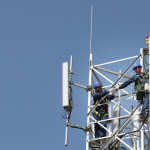 Don't miss a deal at Newegg
Best offers at Argos
Discounts, Sales and Deals at House of Fraser
Save your money with Adobe
Online-Shopping with Intuit Small Business
Best products at Surfdome