Sabrent’s 8TB Rocket Q caps a few weeks of mind-blowing news for NVMe SSDs. It seems like only yesterday when 2TB was the largest-capacity NVMe SSD, or any SSD for that matter. Actually, when I started this article it was yesterday. Now we have the 4TB OWC Aura P12, and the 8TB Rocket Q.

If you just did a double-take, welcome to the club. While a bit dazed, I soldiered on and tested Sabrent’s super-capacious beastie. Guess how it felt not having to worry about running out of space!

The Q in Rocket Q stands for QLC (Quad-Level Cell/4-bit) NAND, which is put through its paces by a Phison E12S NVMe controller. There’s 16GB of DRAM cache on board, and up to 25 percent of the NAND may be employed as SLC cache, writing only one bit rather than four. With the 8TB drive I tested, that’s a whopping 2TB available for cache!

The Rocket Q is the standard M.2 2280 (22 mm wide, 80 mm long) form factor and is x4 PCIe 3. Note that with QLC NAND on both sides it may not fit into some super-thin laptops or devices.The warranty lasts for five years from the time you register the drive, and drives are rated for 120TBW for every 500GB of capacity. Not a particularly high rating, but modern wear-leveling generally means the drive should last far longer than the warranty.

The Rocket Q delivered top-notch performance. However, that’s partly because I reviewed the big dog with 8TB, meaning that a lot of the QLC can be treated as SLC (again, 25 percent, according to Sabrent), writing only one bit instead of four.

A shout-out to Sabrent for being extremely up-front about the differences in performance according to capacity. It’s spelled out in detail on the Rocket Q product page. Sustained transfers will drop significantly once primary cache is exhausted, and that will happen sooner in the lower capacities. However, if Sabrent is consistent across all capacities with 25-percent cache, then even the 500GB model should ace our 48GB single file write test. I did not have that drive to test.

Enough of the warnings, I had the 8TB on hand, and as you can see from the charts below, it was a pretty sweet experience. (Sabrent Rocket Q is the black bar in the next two charts.) 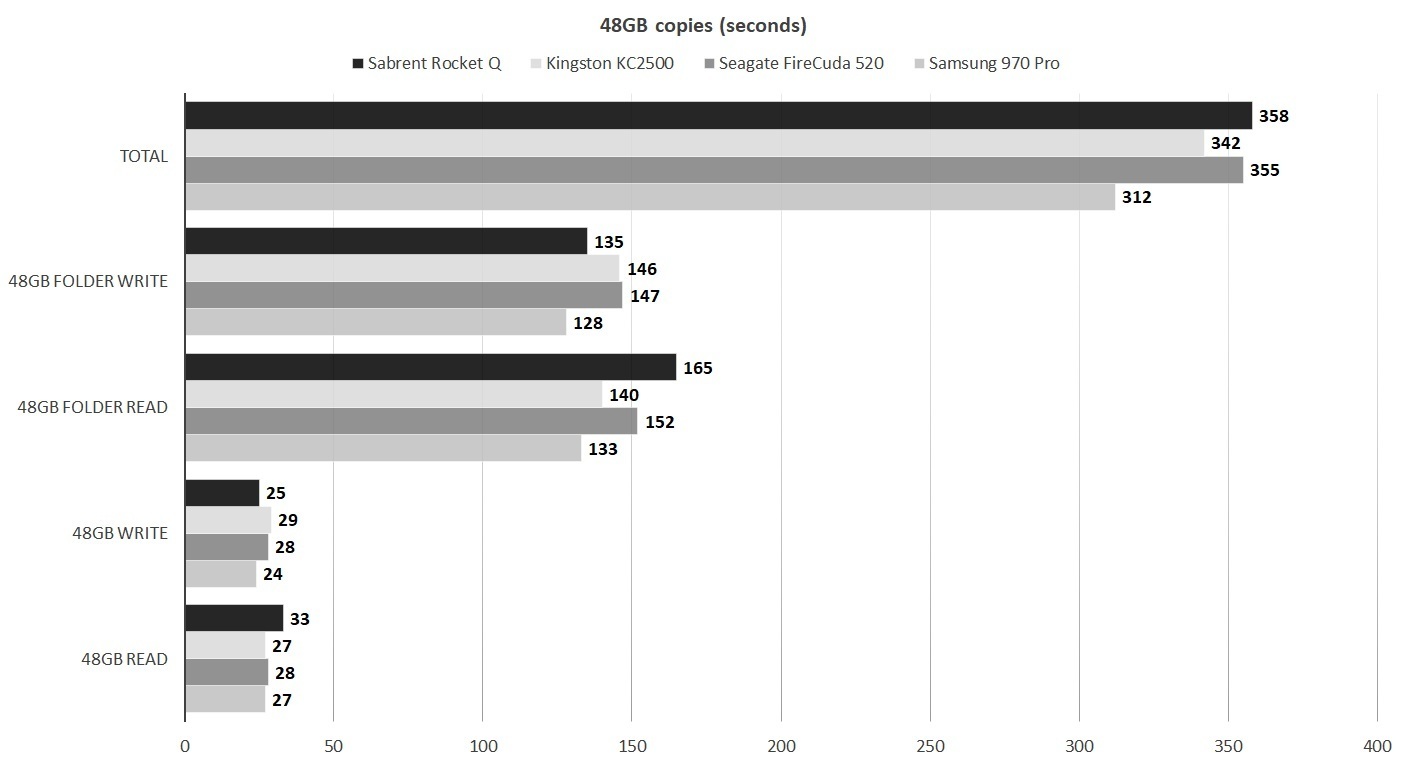 As you can see above, while the Rocket Q didn’t quite match the fastest drives reading, it was on point with writing. 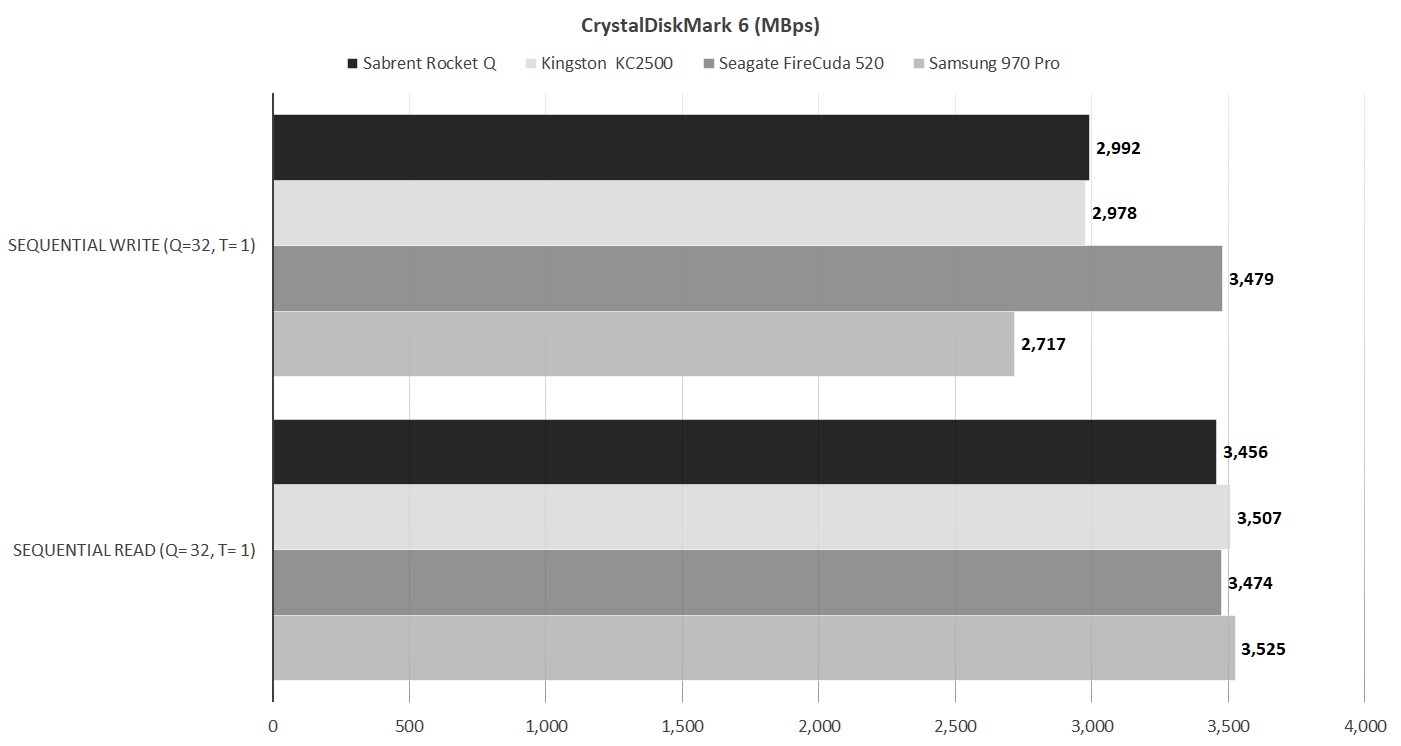 CrystalDiskMark 6, which in our tests is set to use 1GB of data, thought highly of the Rocket IQ. Real life testing was just as kind in its opinion. What you see below is the Rocket Q setting a new record for writing a 450GB single file.

I did finally manage to slow down the Rocket Q to around 700MBps while writing 900GB immediately after another 450GB file write, with the drive almost half full. That’s hardly a tragic decline, and if the Rocket Q had had more time to sort out its caching the drop might not have occured. The odds of your hitting a scenario like this in real life are infinitesimal, at least until the drive gets closer to being filled. The same is true for all NVMe SSDs that tap the main TLC or QLC as SLC for their caching.

With the smaller capacities, you’ll see drops like the one shown above sooner, and more often. So buy the 4TB or 8TB if you can afford it.

You want it if you can afford it

The Sabrent Rocket Q in its 4TB or 8TB flavors is the stuff SSD dreams are made of. Who doesn’t want to have their cake (performance), and eat it too (capacity)? During my review, I found it curiously relaxing to shed my worry about balancing the two. If you can scrape up the cash, you won’t be disappointed. 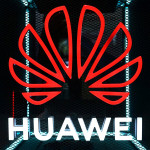 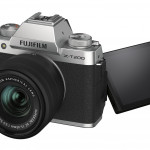 Fujifilm's webcam software will work on macOS in July

Don't miss a deal at The Home Depot
Best offers at Ancestry
Discounts, Sales and Deals at Go Daddy
Save your money with Myprotein
Online-Shopping with Adobe
Best products at Sky