When Samsung launched the Galaxy S21 Ultra, it talked about how the device’s screen supports refresh rates of 120Hz at both full HD and Quad HD resolutions. What it didn’t say until now, however, is that the S21 Ultra serves as the debut device for the tech giant’s new low-power OLED display technology. Samsung has revealed that the flagship phone uses OLED display that reduces power consumption by up to 16 percent.

OLEDs don’t need a separate light source unlike other screen technologies — instead, it depends on organic carbon-based material that emits visible light when electricity is applied. Samsung found a way to make electrons flow faster across its OLED’s organic layers, and the company says that allows the display to “create brighter light while consuming less power.”

5G devices typically use more battery than their predecessors. In addition to the modem’s power needs, newer phones’ more advanced components may be power—hungry, as well. People might also use their devices for video streaming more frequently than before, since having a 5G connection could make it easier to watch shows and movies on the go.

Manufacturers can only increase their phones’ battery capacities to a certain extent, so coming up with new ways to make their devices more power efficient is a must. Samsung explains that the display planel is “one of the most important components affecting a smartphone’s total power consumption.” That’s why equipping the S21 with a low-power OLED technology can “significantly impact smartphone usage time.” 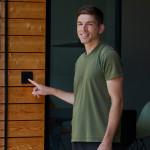 Don't miss a deal at GoCompare
Best offers at Go Daddy
Discounts, Sales and Deals at Intuit Small Business
Save your money with Argos
Online-Shopping with Bodybuilding
Best products at Boohoo