The Ticwris Max 4G rugged wrist computer is a refreshing product but marred by a number of software mishaps that make it hard to recommend it in its current state.

Every now and then, a product surprises not by its technological prowess but by its ability to zero in on a barely exploited niche. The Ticwris Max 4G seems to be one of them; it is essentially a small smartphone with a wristband and a bargain price tag, at less than $150.

Although it targets the B2C market, there’s some extremely interesting potential in enterprise/B2B as well for obvious reasons; wearing a computer on your wrist means you’ve got free hands. 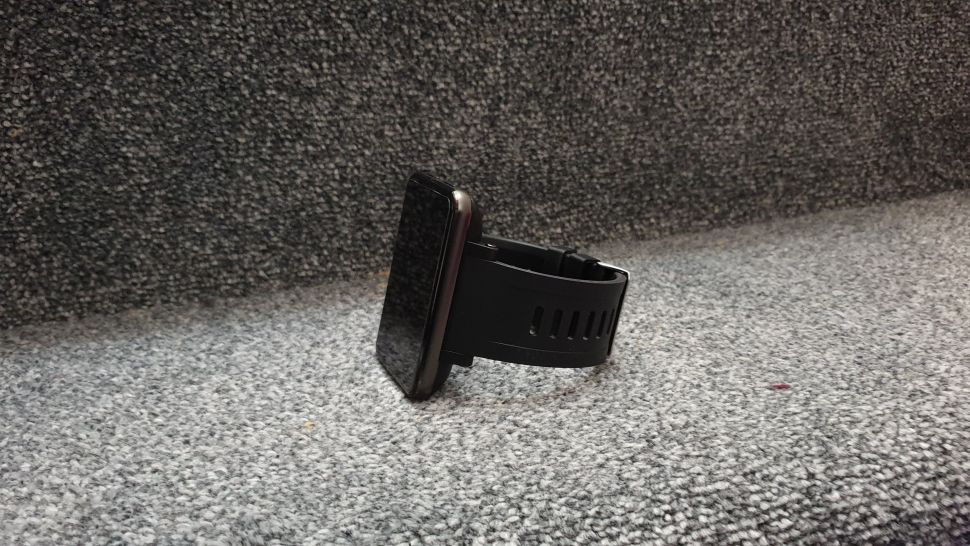 A big watch is how one could describe the Ticwris. With a thickness of 15mm and a footprint of 50 x 74mm, it looks like a smaller version of the iPhone 3G when viewed from above and at 155g, it is actually heavier than the aforementioned Apple handset. 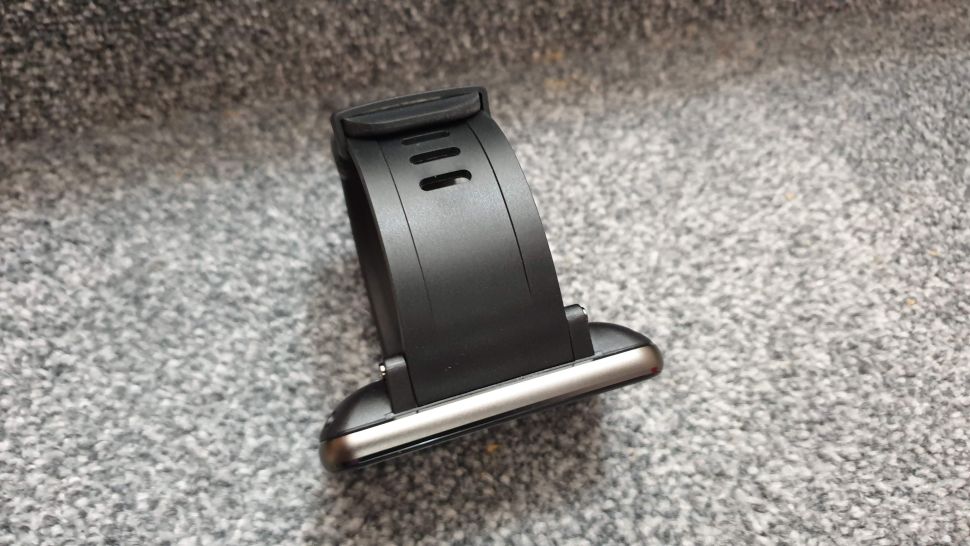 The Max 4G combines glass with metal and ABS plastic (for the actual unit) and a rubber strap – similar to those on cheap Casio watches – that is 34mm at its widest and almost 210mm long, enough for most common wrist diameters 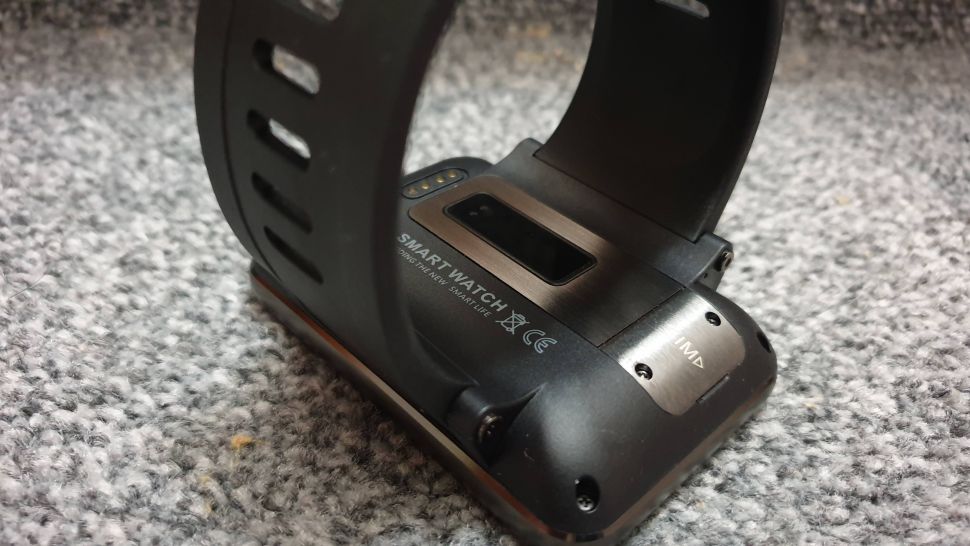 There’s no mention of the Ticwris brand on the body of the watch, only on the tang buckle, which makes it easier to swap brands. There’s a side firing speaker grill at the back with a heart beat sensor, pogo connectors for the charging station and a SIM slot that’s hidden behind a flap, secured by two screws. 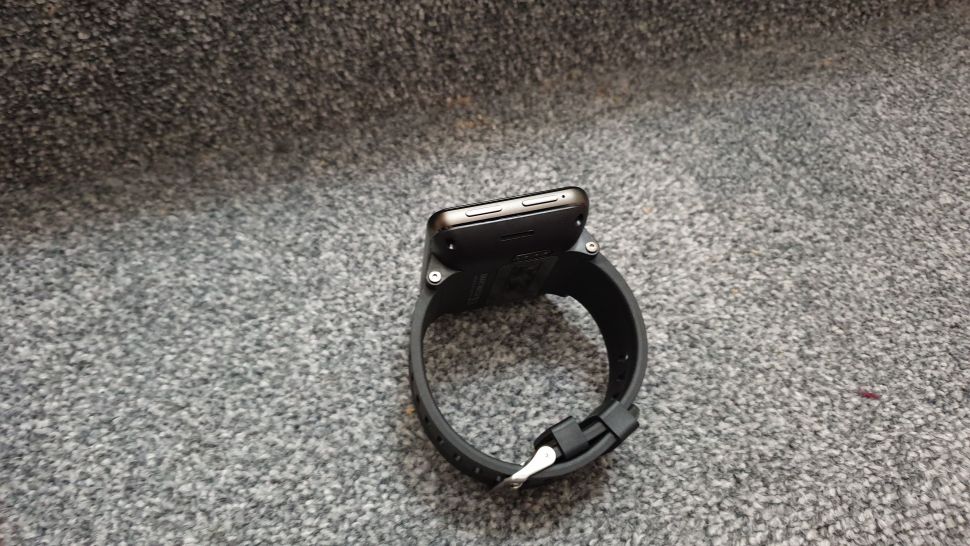 On one side of the watch are two buttons; the lower one is the on/off and home button while the one above acts like the back button. 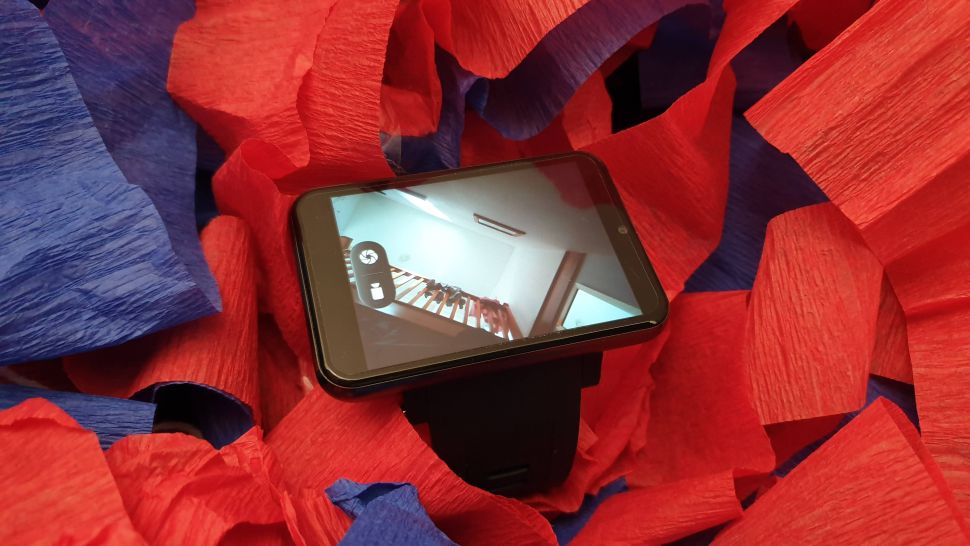 A pinhole camera can also be found on the right hand side, not far from where the microphone is.

Note that the device is IP67 rated, which means that it could in theory be immersed in water plus it looks sturdy enough to take a few knocks. There’s obviously far less chance of it being dropped on a hard concrete surface given that it is likely to be strapped to the owner’s wrist, a field worker or outdoor operator. 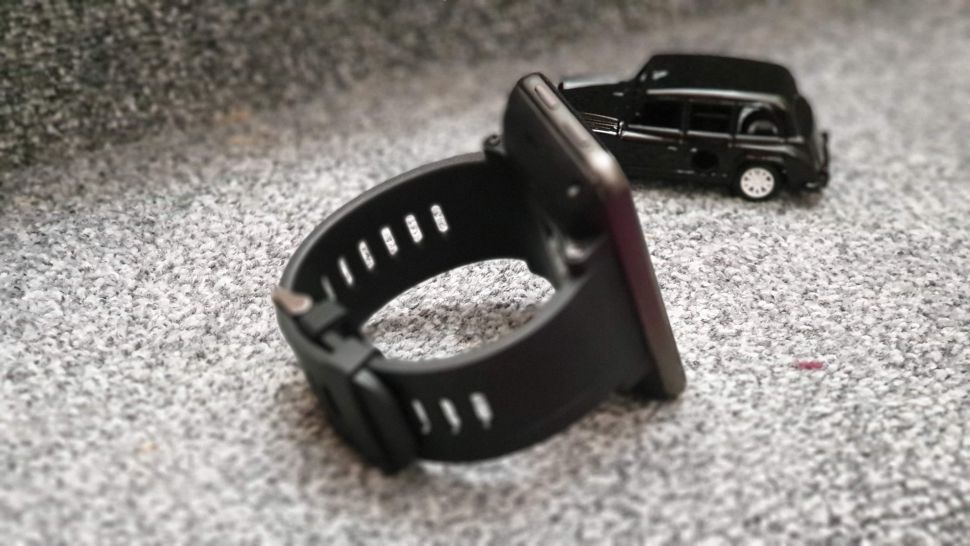 The Max 4G is closer to a smartphone than it is to a watch. Indeed, you can make a call on this “watch” and one can argue that Ticwris missed a trick by not allowing the device to be detachable.

At the heart of this smartwatch is a quad-core Mediatek CPU, the MTK6739, which has powered a raft of entry level 4G smartphones since its introduction in 2017. 3GB of system memory and a whopping 32GB of storage make this smartphone, at least on paper, the equivalent of an iPhone 7 spec wise.

The rest of the specification sheet is equally impressive; an 8-megapixel front facing camera, a nano-SIM card, a 2.8-inch 640 x 480 pixel display, a 2.88Ah battery (which is charged via a proprietary docking station), plus GPS, Bluetooth 4.2 and Wi-Fi. Oh and you do get a speaker as well as a heart beat sensor but sadly, no blood oxygen saturation level monitor. 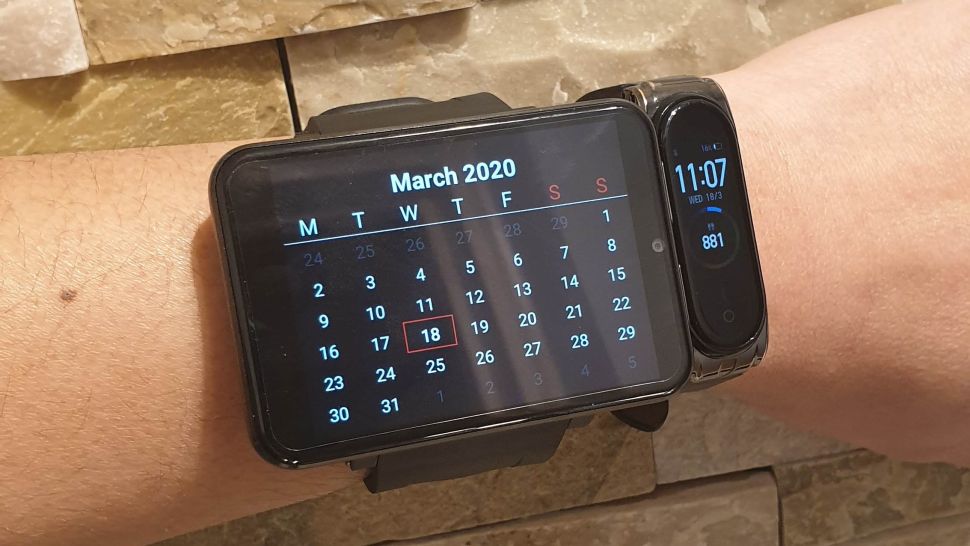 We didn’t run a series of performance tests as we would usually do on an Android device since this is not a normal product. Its peculiarities are likely to put it at a disadvantage when running traditional benchmarks; its screen resolution, for example, would preclude running most tests that include a gaming element and its older operating system will not have any improvements that later versions of Android would have. Other than the big brands, smaller Chinese companies do not have a good track record of updating their firmware. 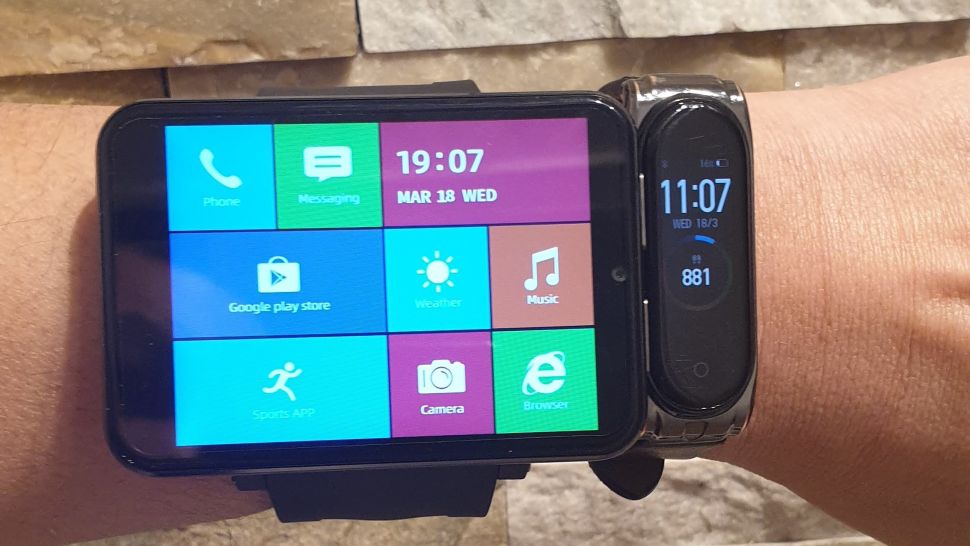 Once secured on your wrist, the Ticwris is intuitive enough to operate without looking at the supplied manual. From the default menu – that looks a lot like the Windows Phone one – slide up to access the pedometer interface, slide down to show basic information, left to display the quick toggle menu and slide left to show pending notifications.

Sliding right from the watch home page will bring up all the available apps while pressing (and holding) the screen for a couple of seconds will bring up a list of faces for your watch. 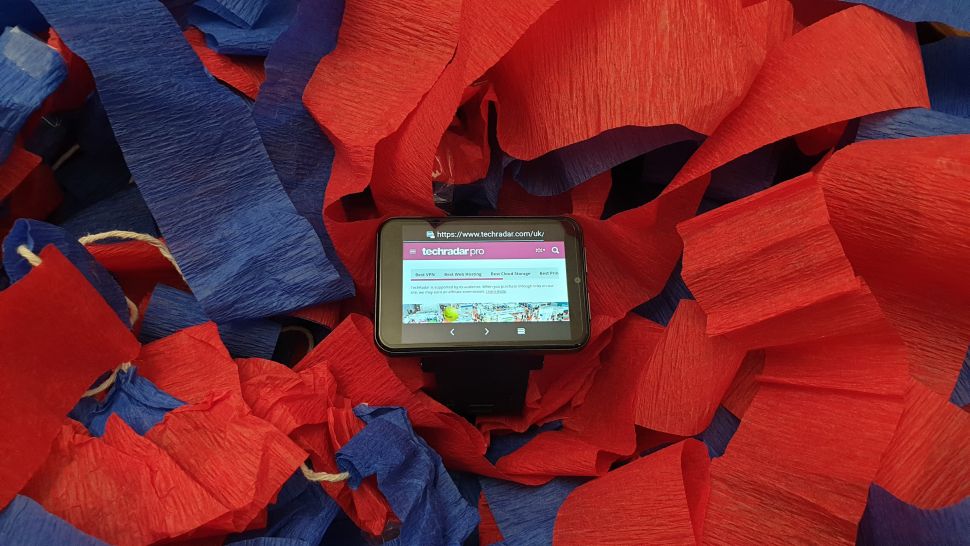 One clear issue we had is that other than the initial home display, controls are cumbersome on such a small screen (which is sadly not coated with an oleophobic material). It all feels a little bit gimmicky, especially as you have to do everything with one finger.

There are no known direct competitors to the Ticwris Max 4G. A rival brand called Lemfo has a clone that is marginally more expensive but it seems that both companies have merely sourced their products from the same design and manufacturing firm.

The LEM10 from Lemfo is perhaps the only other alternative although it doesn’t offer a big display, just a small 1.88-inch one with a 360 x 320 pixels resolution, one which is likely to cause a lot of problems when running Android 7.1.1 because it is so low. It does have the same CPU, RAM and storage components though.

Frustrating is how one can best describe the Ticwris Max 4G. As it is the case for a number of Chinese products, on paper, its specification list is outstanding but it is let down by the poor user interface.

A VGA resolution on a small display is not the worst thing that happened to the Max 4G; the fact that it is using a version of Android that is nearly four years old is. Not only is it an obvious security timebomb, it also lacks the latest and greatest Android features although there is Google Assistant.

The form factor though is, we hope, here to stay. One can imagine a future version of the Ticwris that will offer a much better user interface, one specifically tweaked for a single-hand use on a very small screen. Others may add other features like the ability to be charged wirelessly, a barcode scanner or even a keyboard (not unlike the Zebra WT41N0). 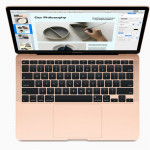 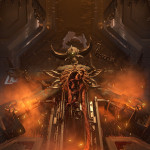 Don't miss a deal at H&R Block
Best offers at EBay DE
Discounts, Sales and Deals at Farfetch
Save your money with Newegg
Online-Shopping with Argos
Best products at Mobiles