Not only are true virtual reality headsets at long last here in 2016, there are two to choose from. That’s forced us come to grips with actual reality and decide: HTC Vive vs Oculus Rift.

Which is a better VR headset? That really depends on the immersive experience you’re looking to get sucked into, the controls you want to hold onto, and the price you can afford. 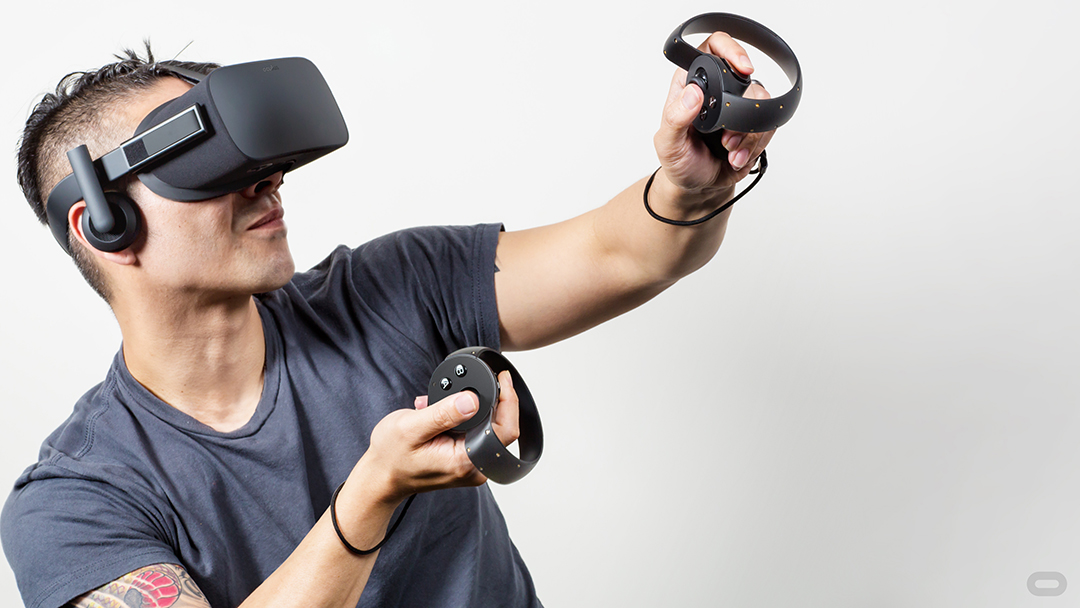 HTC Vive, meanwhile, is built by established hardware and software giants. HTC has crafted top-rated phones and tablets, while Valve is a long-time ally of PC gaming fans with Steam. 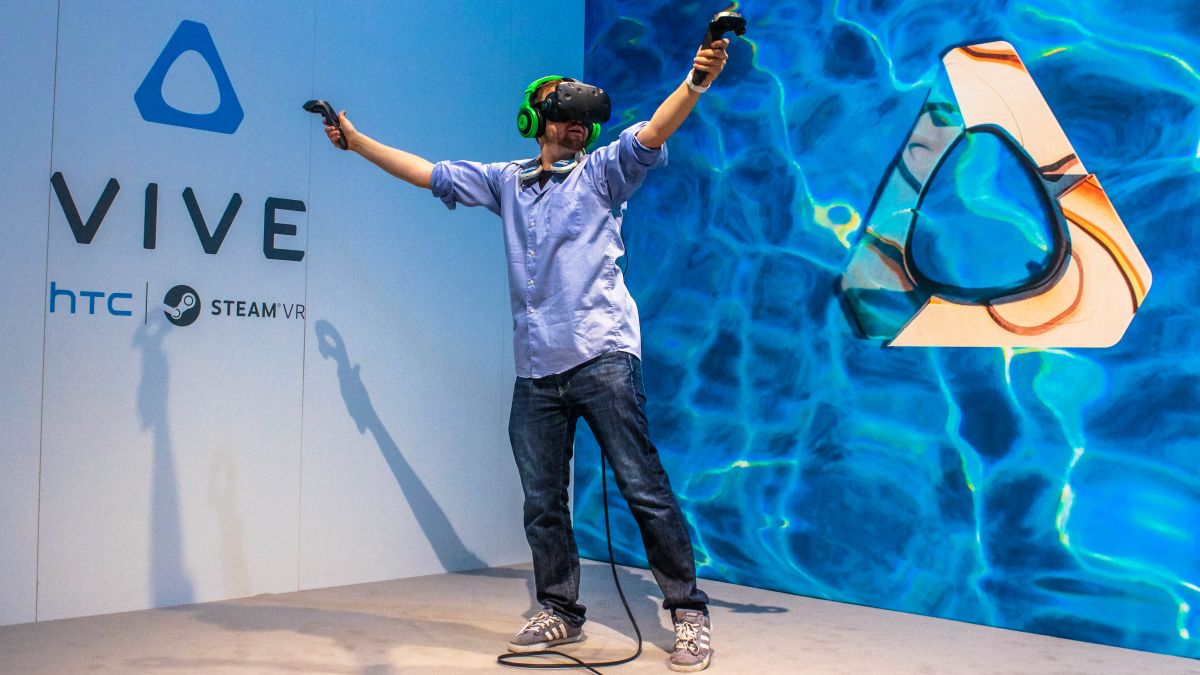 They’re expensive, so you’re likely only going to be able to buy one. To help you wrap your head around these VR headsets, here’s our HTC Vive vs Oculus Rift comparison.

Both successfully offer expansive video game worlds and out-of-body experiences within your living room, and that’s because the technology backing them up is similar in a lot of cases. 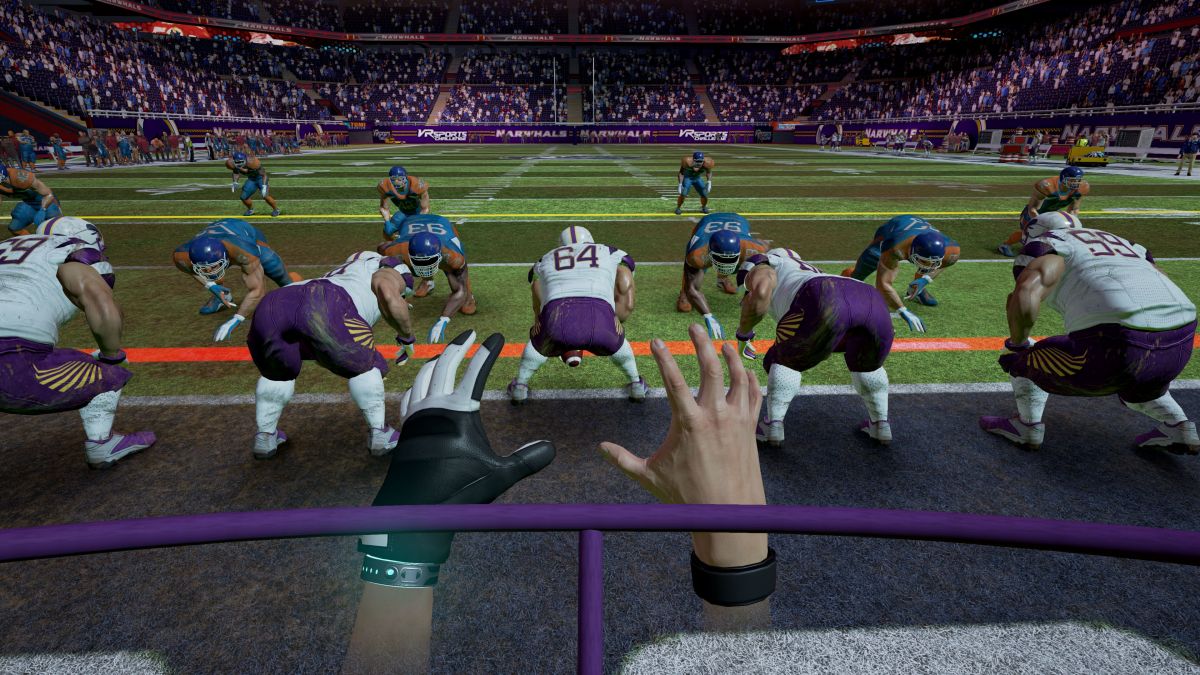 With a 90Hz refresh rate on both headsets, this means there are 233 million pixels flying at your face every second. This makes for a grown-up VR experience vs the 60Hz Samsung Gear VR.

HTC Vive and Oculus Rift also have a wider 110 degree field of view (measured diagonally). This causes the virtual reality world to feel as if it truly wraps around your head. 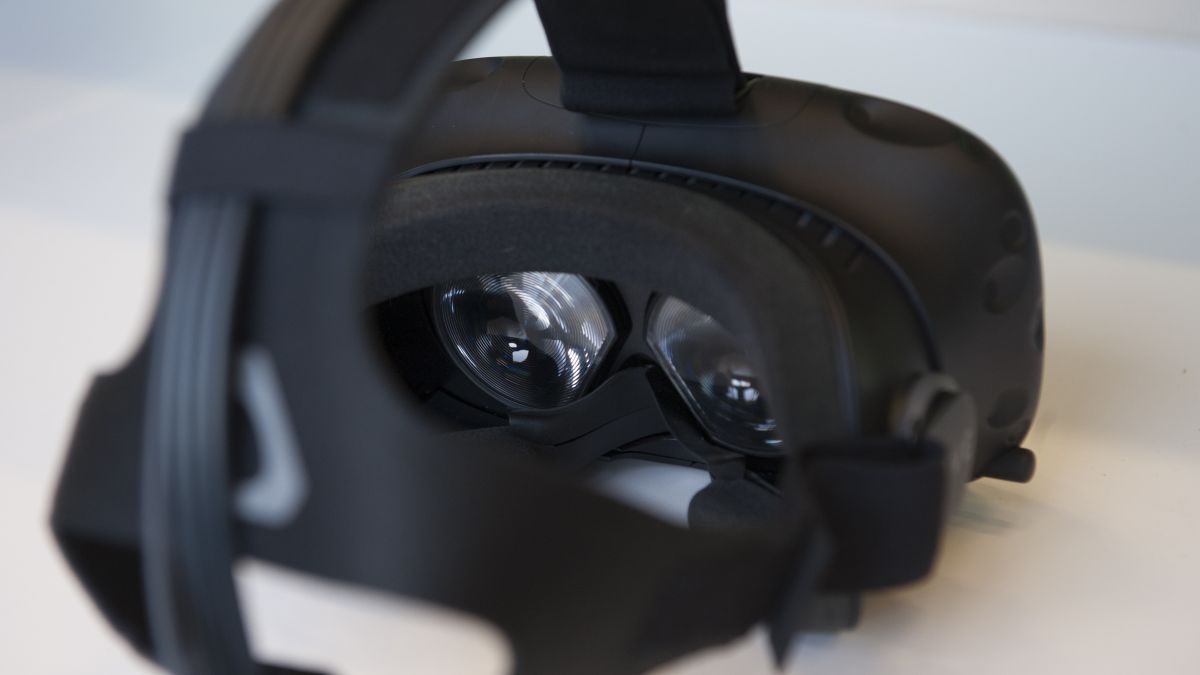 You’re not going to be able to break free of the required computer, as both headsets have to be tethered to a powerful Windows machine with a number of cables in order to function.

However, besides the 37 sensors in the Vive headset that provide fluid, seamless movement, there’s also a front-facing camera that can make a virtual world of difference.

HTC’s camera allows for a Chaperone safety system, casting a blue outline on walls and objects when you get too close. You can even turn it on for a Matrix-like look at everything at once. 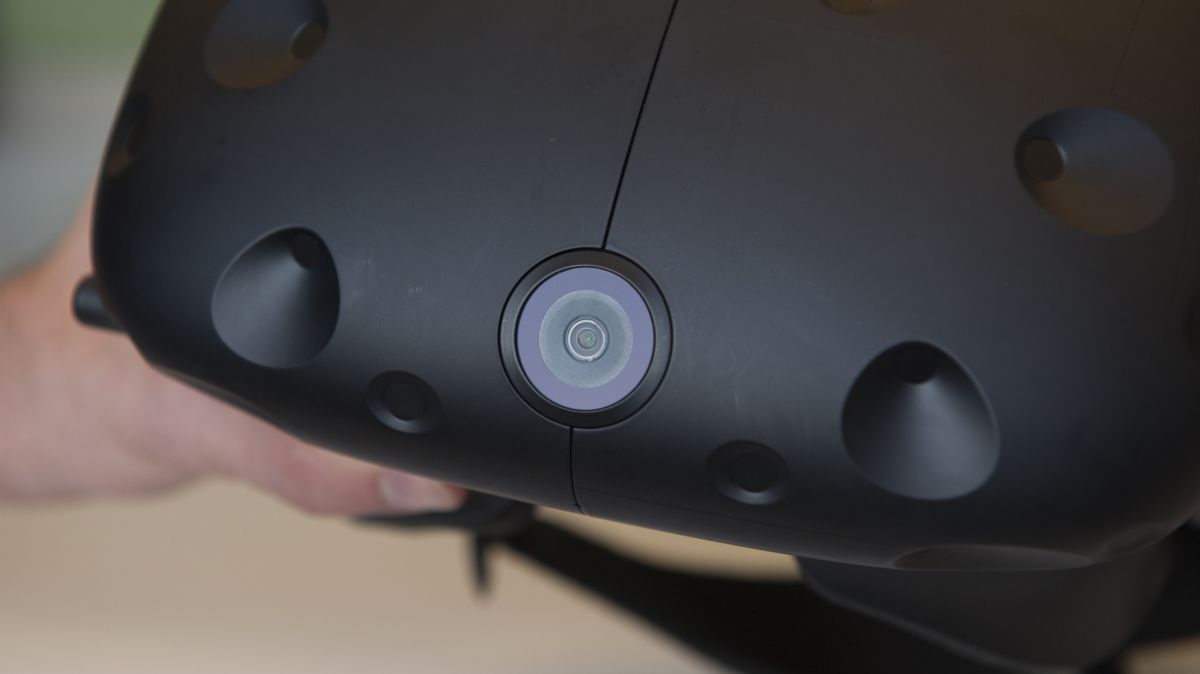 Chaperone is a mind-blowing safety net that serves to foster room-scale VR within the 15 x 15ft tracking space allowed by Vive’s two lighthouse base stations (which look like small speakers, but emit invisible lasers).

Oculus Rift doesn’t have a camera on the front of its headset for augmented reality vision, and its VR space is limited to 5ft x 11ft. But it does have 360-degree positional head tracking.

Your gateway to other worlds is through a VR headset strapped to your noggin via adjustable velcro. It’s the ski mask of a dystopian future with no clear visor, but you can see so much more. 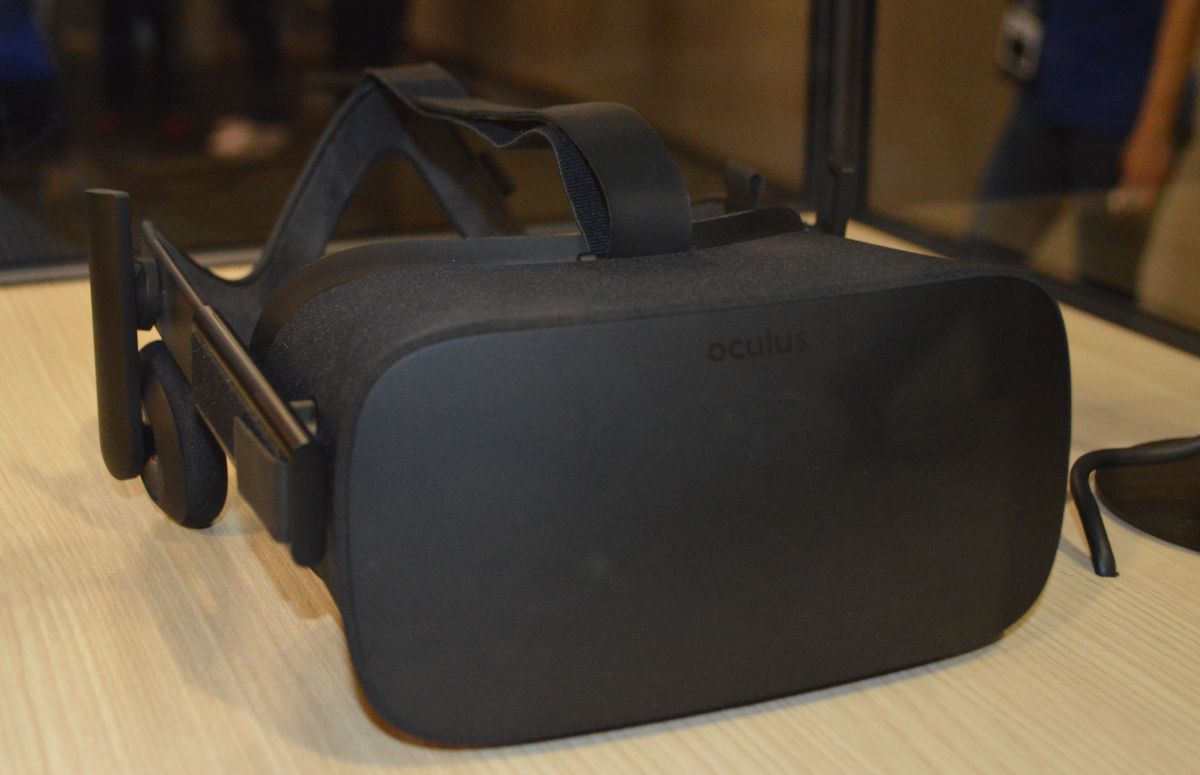 This is where the Oculus Rift vs HTC Vive differ the most, actually. While both are comfortable enough with face padding and are lightweight, there’s definitely more heft to the Vive.

Oculus Rift is a bit more refined looking with a compact design that amounts to a big, black brick sitting against your face. There are lightweight headphones that are thankfully removable.

HTC Vive is bespeckled with 37 visible sensors, and while it’s otherwise black like the Oculus, it is noticeably larger. It looks almost as if the Oculus headset has had a puffy allergic reaction. 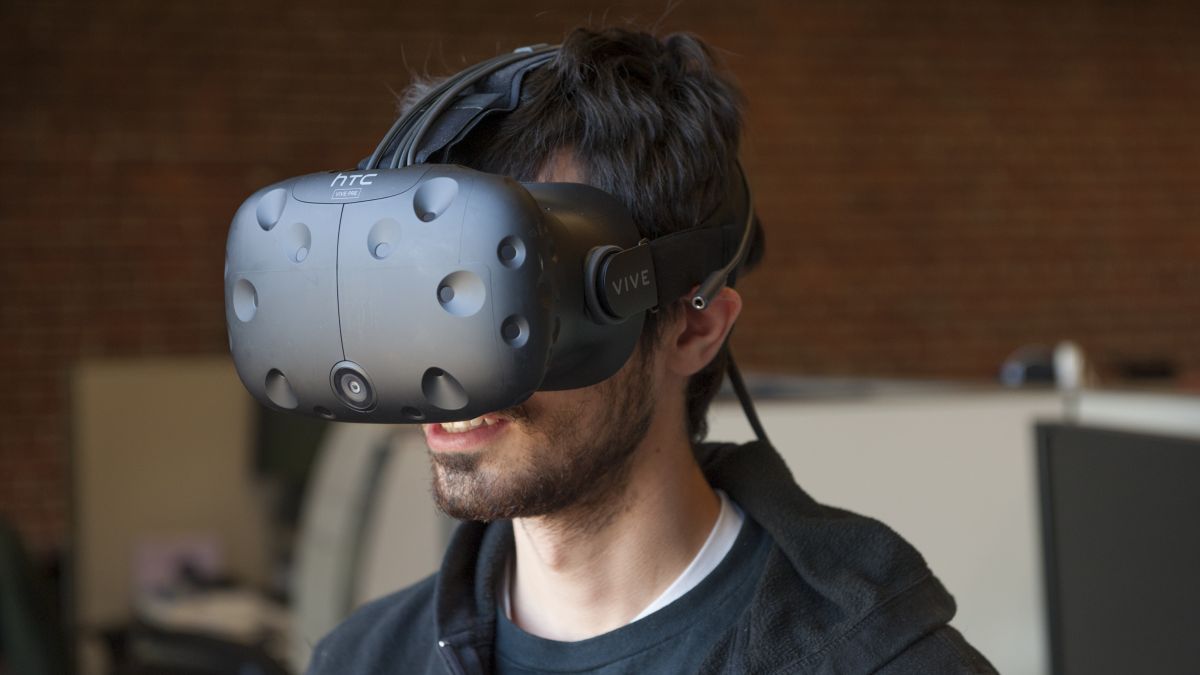 And though I said Vive is lightweight, it’s technically heavier at around 555g without headphones included. Oculus is 470g by comparison and throws in headphones.

That bigger size and weight does have advantages: a lens distance knob moves the Vive lenses further and closer to your face. This is a helpful extra for people who wear glasses. Oculus Rift supports glasses, too, but the headsets doesn’t have this handy adjustment knob.

Neither VR headset requires a phone, like the Samsung Gear VR, but HTC Vive does connect to your phone via Bluetooth for answering calls and messages. You can really wear it all day.

Stepping into virtual reality is surreal enough, but it really becomes a tangible world when you can reach out and seemingly feel the VR environment with controllers. 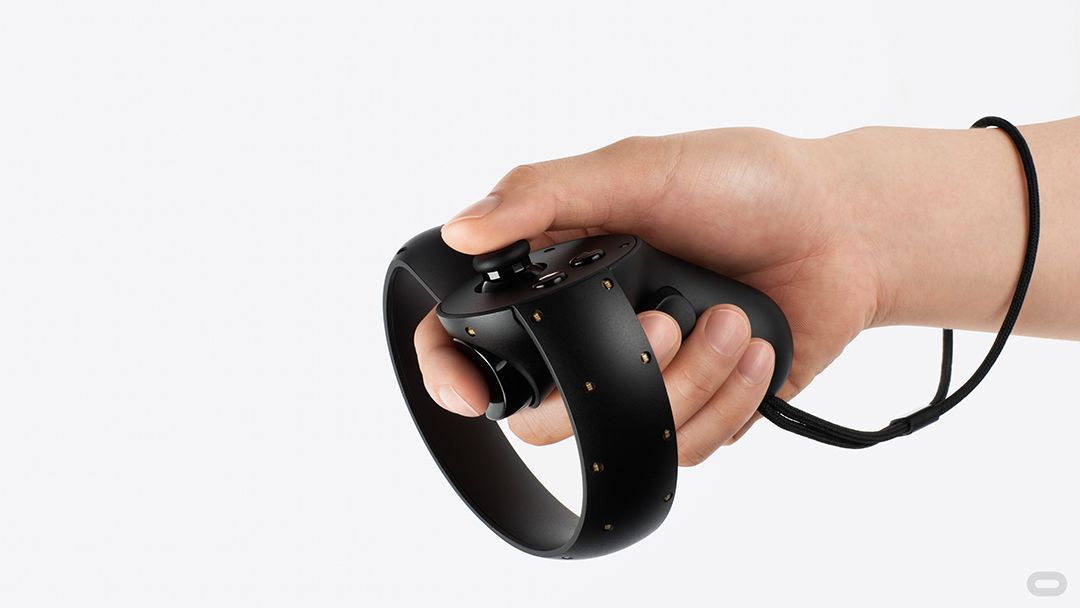 That deeper experience wasn’t ready for March’s Oculus Rift launch, but its Oculus Touch controller with a hand-confirming, half-moon shape are slated for later this year.

“Oh, I’m never going to get the hang out this” was my reaction when I was briefed on the controls for Bullet Train. Seconds later, I was hit switches and picking up guns, then throwing them at enemies when they were spent.

Oculus Touch needs to hurry up, however, because while Rift ships with a normal Xbox One gamepad, the HTC Vive comes with two unique-looking controllers with buttons and touchpads. 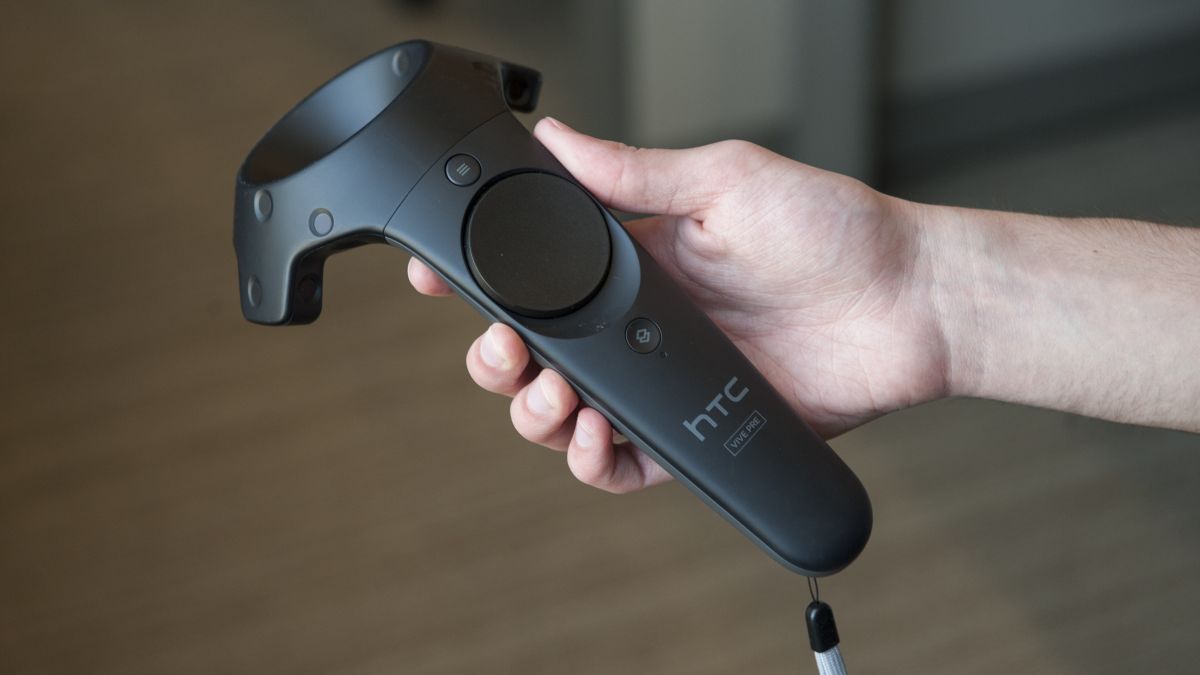 Weidling these Vive controllers puts my hands into the game virtually, and I’ve demoed the same with the Oculus Touch. It’s just that one is here now and the other is not.

All of this VR headset technology, regardless of the differences under the almost literal hood, is enough to power virtual reality worlds. So which translates into better games?

There are 30 Oculus Rift launch games, and that’s expected to reach 100 by the end of 2016. It comes bundled with two of the best, too: Lucky’s Tale and Eve: Valkyrie.

Testing Lucky’s Tale, I felt like there is finally brought something new to the 3D platformer genre pioneered by Super Mario 64. All of a sudden, looking in all directions for hidden coins opened up a new dimension.

Eve: Valkyrie is aesthetically different, but takes fully advantage of VR’s 360 degrees view with spaceship dogfighting. The gameplay trailer above really gives you a sense of the chaotic action involved. 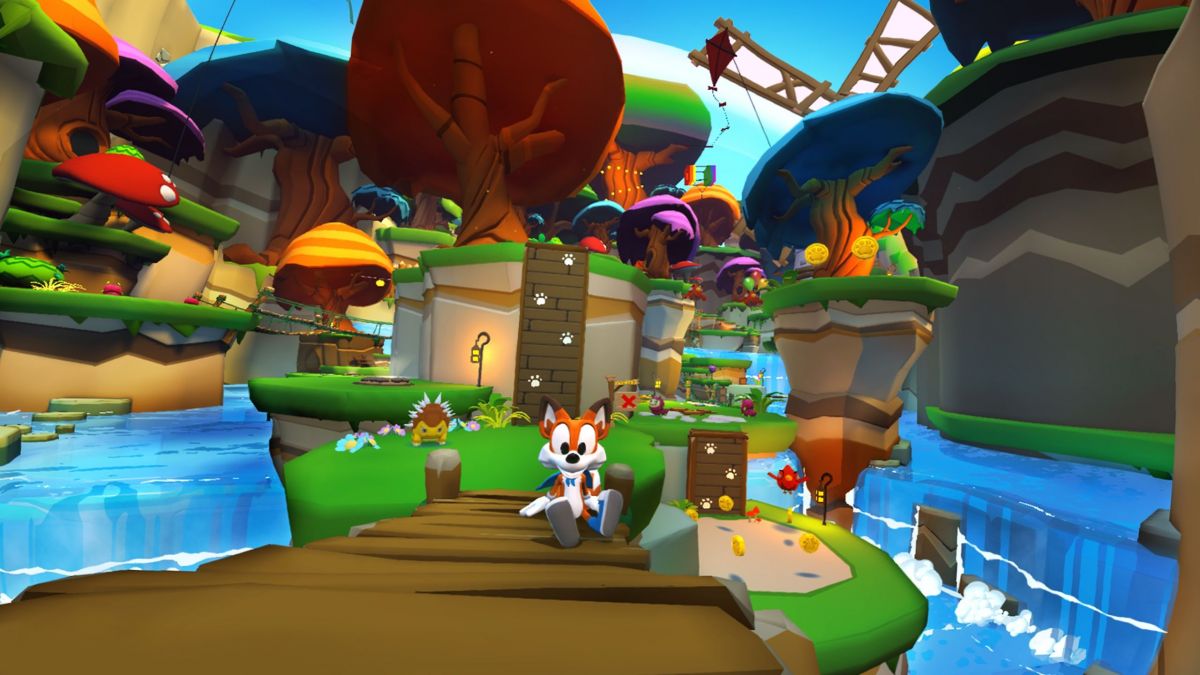 HTC Vive has some 50 launches window games, but no exclusives (many are also on the PC), according to Fortune. This includes bundles games Job Simulator and Fantastic Contraption.

I enjoyed playing Space Pirate Trainer and Tilt Brush with the Vive headset and its controllers, but HTC’s game lineup isn’t as striking as core gaming experiences of the Oculus Rift.

That can certainly change, as VR developers have more time to craft engrossing virtual reality gameplay, especially given the native Steam support on the Vive.

As expensive as HTC Vive and Oculus Rift are, the hidden cost is in the computer hardware that’s required to start playing any of these graphics-intense games. 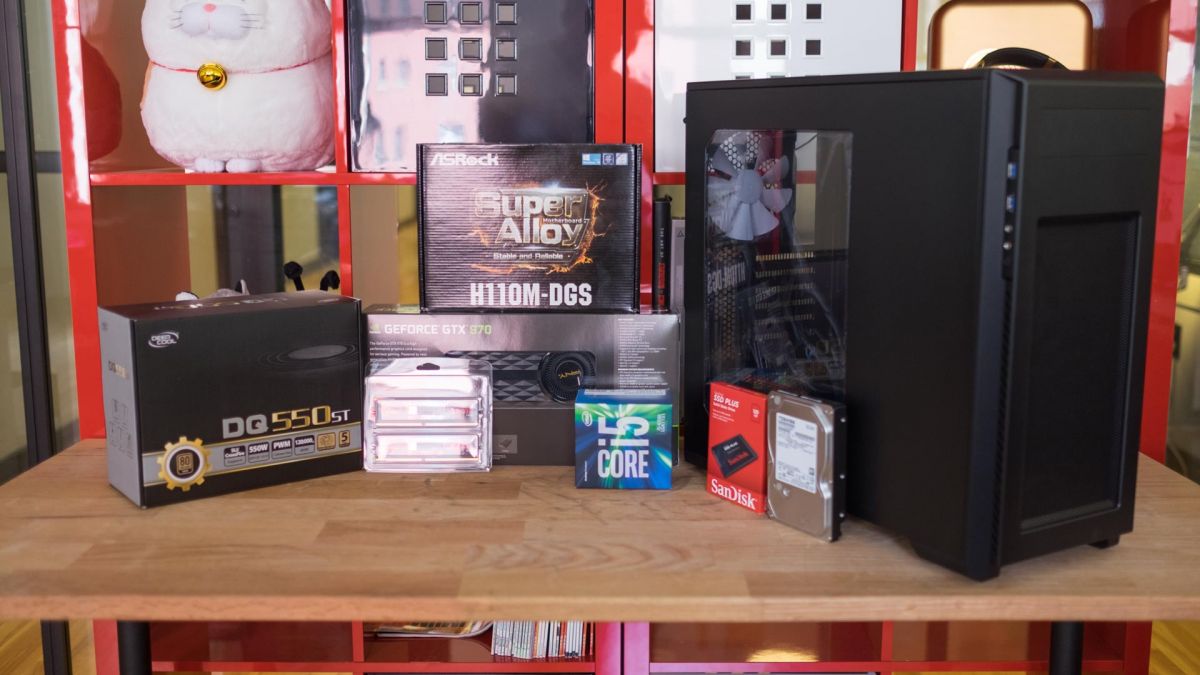 Oculus Rift also demands two USB 3.0 ports and an HDMI 1.3 port or better. HTC Vive only needs one USB port and wants either an HDMI 1.4 or DisplayPort 1.2 or better.

You clearly want a virtual reality future, but you know it comes at a cost. Owning a VR headset may be the ultimate fantasy for some people until a price drop happens. 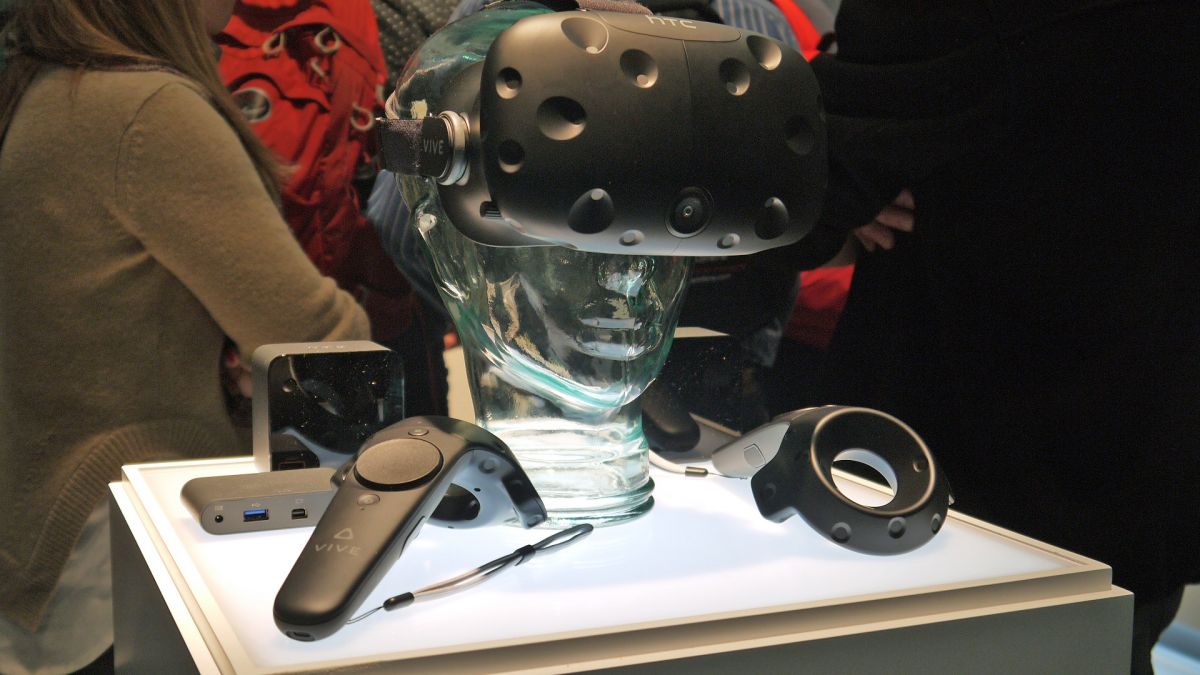 How much is the future worth to you? You might not have to answer that question right away simply because both headsets are backordered. 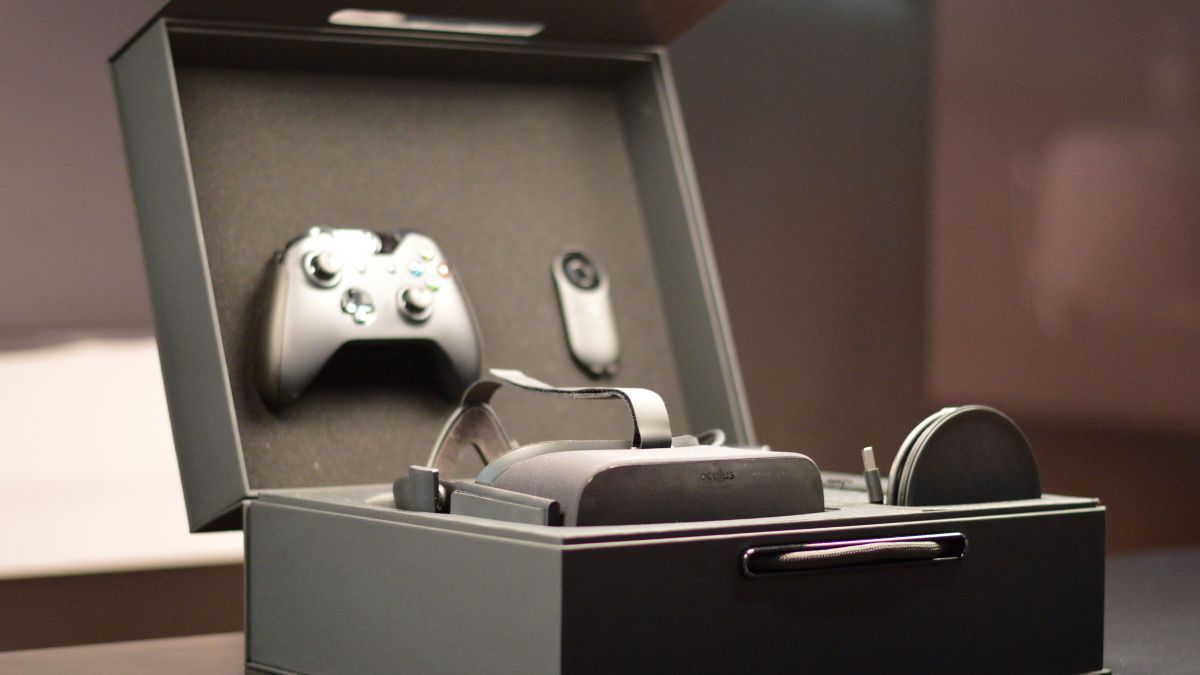 While the Oculus released first in March and the HTC Vive is now shipping to first customers for an official April 5 release date, you’re likely to get a Vive before a Rift.

New Oculus Rift orders won’t be in stock until July, while HTC Vive will be ready to ship two months sooner: May 2016. The future isn’t here yet for so many anxious gamers.

There’s a lot that goes into an HTC Vive vs Oculus Rift comparison and that ultimate decision, more so than our Xbox One vs PS4 debate. That’s because VR headsets are gaming’s great unknown at the moment, while both Sony and Microsoft’s consoles have always been seen as safe bets. 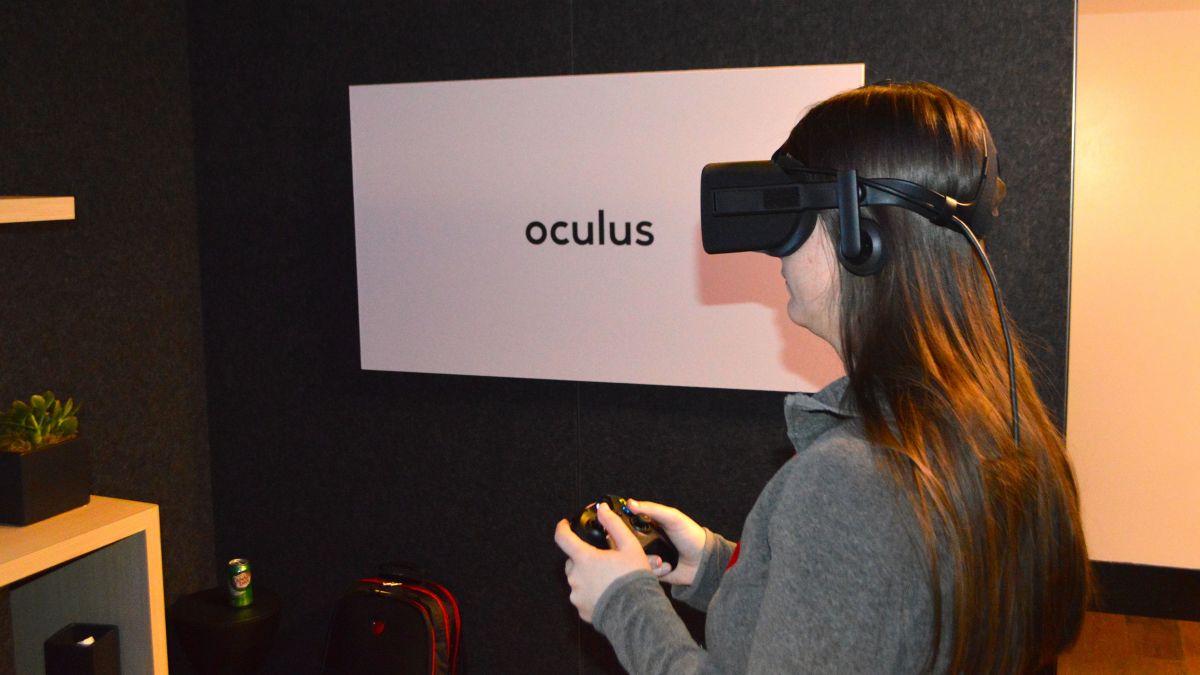 The good news is that Oculus Rift demand is strong, and so are its games out of the gate. You’re getting a powerful virtual reality headset for a price cheaper than the Vive.That’s a big plus, unless of course Rift’s more stringent processor and video output requirements add more to your bill than the savings are worth.

HTC Vive, on the other hand, is a futuristic-looking headset that’s a little more future-proofed with a front-facing camera, room-scale VR and two controllers bundled with the order. Oculus Touch controllers don’t come until sometime later this year. 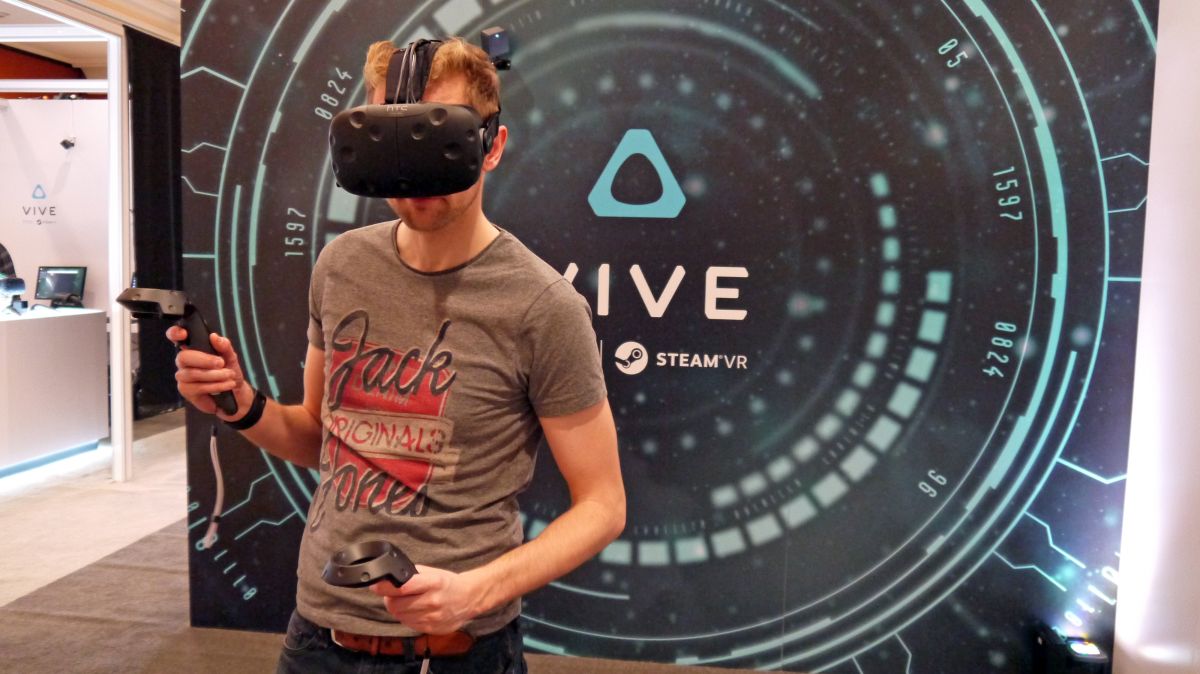 You certainly pay for that extra technology and those Vive controllers, however. Its price will pull the plug on virtual reality for many eager gamers with a smaller budget. I’m also still waiting for more core game experiences from the HTC Vive, and I know that will happen given the advanced technology involved and the Steam platform backing it up.

You really can’t go wrong with either VR headset. They’re both mightily impressive, and have tremendous support, whether it’s from Facebook or Valve. Which one is best for you really comes down to the amount of money you’re willing to spend and the type of immersive games you want to play. 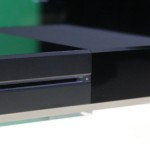 There won't be an Xbox 1.5, says Phil Spencer 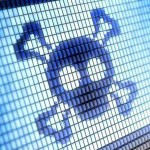 Don't miss a deal at EBay DE
Best offers at Brian Tracy
Discounts, Sales and Deals at Sky
Save your money with Newegg
Online-Shopping with Microsoft Store
Best products at EE Mobile