WHAT IS THE ACER PREDATOR XB271HU?

The Acer Predator XB271HU is one of a new breed of gaming monitors that not only features the high refresh rate you expect of a gaming display but has the great image quality you’d associate with an IPS panel too.

What’s more, it includes Nvidia’s G-Sync technology for eliminating image tear and stutter, sports a high-end design and a fully adjustable stand as well. Along with the Asus ROG Swift PG279Q, on paper it’s as good as you could possibly hope for from a gaming monitor right now. So does it justify it’s near-600pounds asking price?

There’s no mistaking the XB271HU is a gaming-orientated unit. Featuring splashes of red on its feet, a Transformers-esque logo on the bezel and an angular stand design, it has all the hallmarks. Those red metal feet are a touch over the top for my liking, but otherwise, the finish is fairly muted with matte-black plastic used throughout.

The Predator XB271HU is well-built too. Everything from the base to the back of the panel feels reassuringly sturdy, while the movements for the various ergonomic adjustments are smooth and effortless.

What’s more, there are none of the usual cost-cutting tricks evident: such as having the stand rotate simply by having a flimsy bit of plastic on the underside, which in turn makes the whole display rather wobbly. Instead, the Predator features a proper rotating joint between the stand and the base. 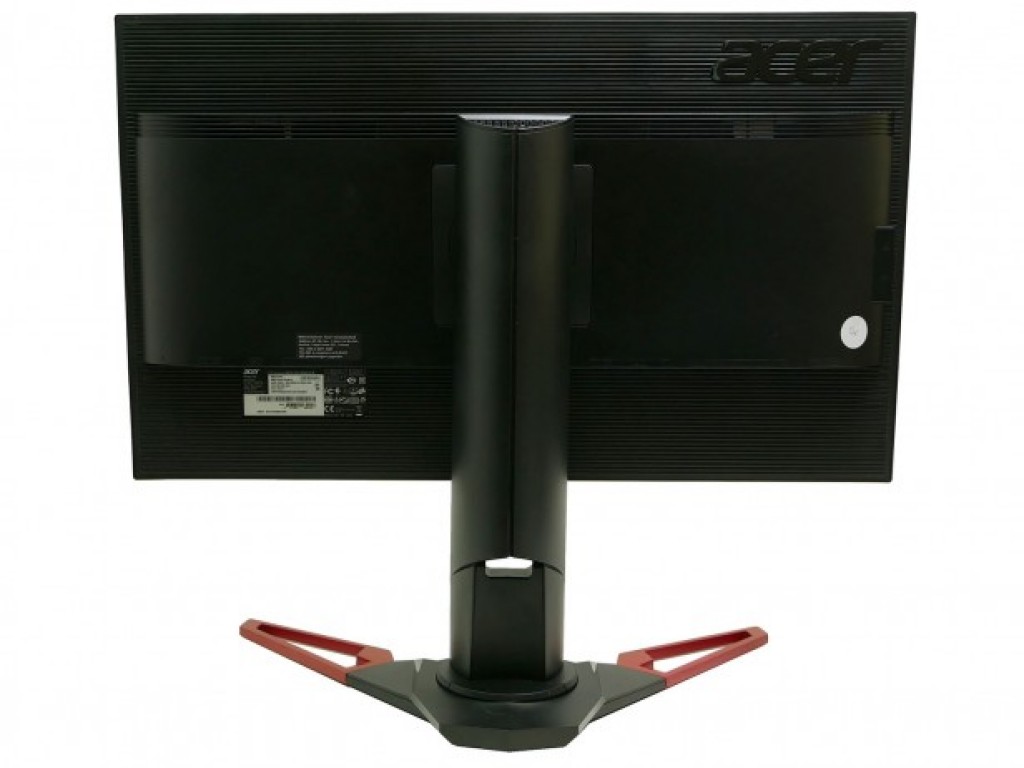 Those adjustments consist of 120mm height adjustment, -5 to 35 degrees of tilt, 90 degrees of pivot (for portrait mode) and 60 degrees of rotation in the base. That’s plenty to ensure this monitor can be manoeuvred into a comfortable position for just about anyone. For those requiring a greater degree of versatility, there’s also a 100 x 100mm VESA mount on the rear so you can use a third-party monitor mount.

Another feather in this monitor’s cap is the inclusion of a borderless panel. This is where some of the already narrow bezel of the monitor sits below the front panel of plastic that makes up the display, with only a tiny 2mm bezel protecting the very edge.

The result is that when the monitor is turned off, it looks like there’s an incredibly slim bezel, which in turn gives the whole unit a more sleek, compact look. 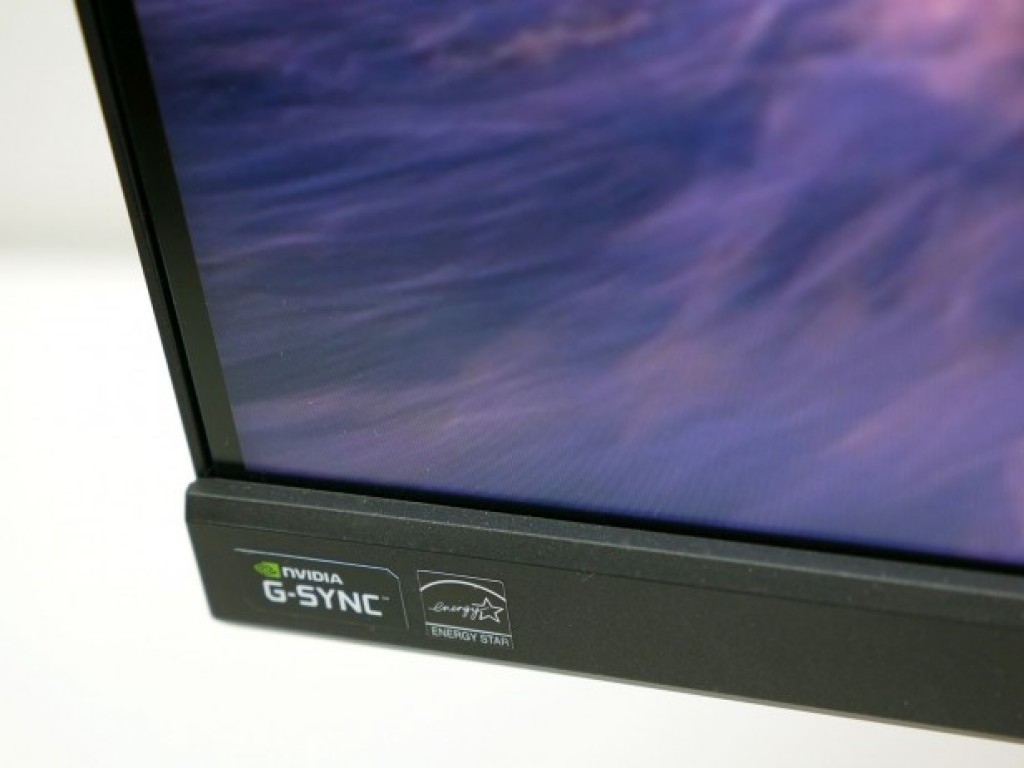 One area where the XB271HU falls behind, however, is connectivity. Thanks to the limitations of Nvidia’s G-Sync image processor, this display has only two inputs: one DisplayPort and one HDMI. The former supports fast refresh rates and G-Sync, while the latter will allow up to 2,560 x 1,440 resolution at 60Hz.

In contrast, similar monitors that use AMD’s rival FreeSync technology tend to have four or more inputs-although notably, none have more than one DisplayPort.

You do get a four-port USB 3.0 hub, with two ports on the rear and two on the left side. There’s also a headphone output and a pair of speakers that do a passable job. 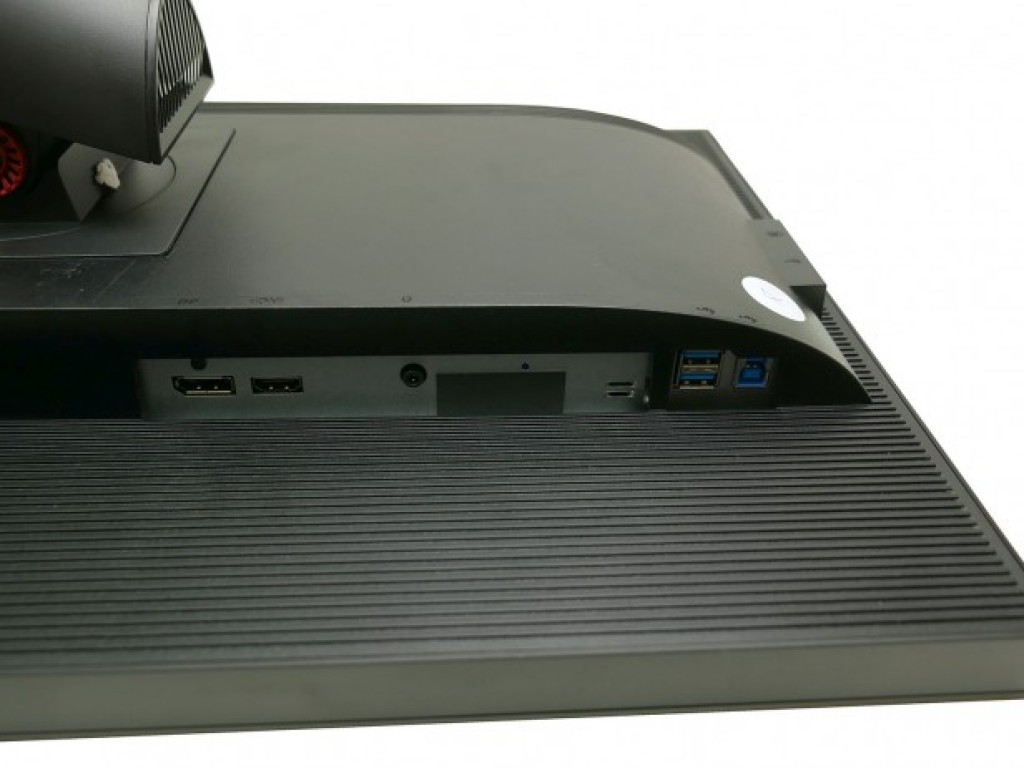 The 27-inch panel packs in 2,560 x 1,440 pixels, which means this isn’t a super-high-pixel density display. However, at the monitor’s size, that resolution does provide an ideal 110ppi, which in my opinion offers the perfect balance; it’s high enough to not look pixellated, but low enough that everything isn’t too small.

Until manufacturers can offer exactly double the pixel count at this size, I wouldn’t be tempted to upgrade to a more densely packed panel.

Plus, of course, this is an IPS panel and so benefits from the superb viewing angles for which such panels are known. Normal TN-based gaming monitors tend to suffer poor viewing angles, which can be problematic for a number of reasons.

First, if you move your head, colours and contrast can shift and change, which is distracting. Second, on large monitors there’s a significant difference in the angle between your eyes and the centre of the screen and the far corners; that can mean the whole panel looks slightly uneven. Third, poor viewing angles aren’t ideal if you’re gaming with friends and they want to watch too.

IPS panels solve all the above issues. They can be slightly lower contrast than some panel technologies, but are still great for everyday use.

Meanwhile, G-Sync is Nvidia’s technology for eliminating image tearing and stutter in games. I won’t go into details here but, suffice to say it, it’s must-have tech for gamers. To read more about the tech, here’s an explanation of AMD’s FreeSync, which works in the same way. The key point to note is that G-Sync functions only if you have an Nvidia graphics card, and although AMD’s FreeSync tech is an open standard, the reality is that it’s available only with AMD graphics cards.

One of the worst aspects of this monitor is how awkward it is to attach the base to the stand. It uses a hex bolt to pull the two pieces together, and not only is that less convenient than the bolts that have a little flip-up handle with which to tighten them, it’s also tricky to locate the bolt in the threaded hole.

That aside, physical setup is easy thanks to the effortless ergonomic adjustments; the panel just clips into place on the stand. 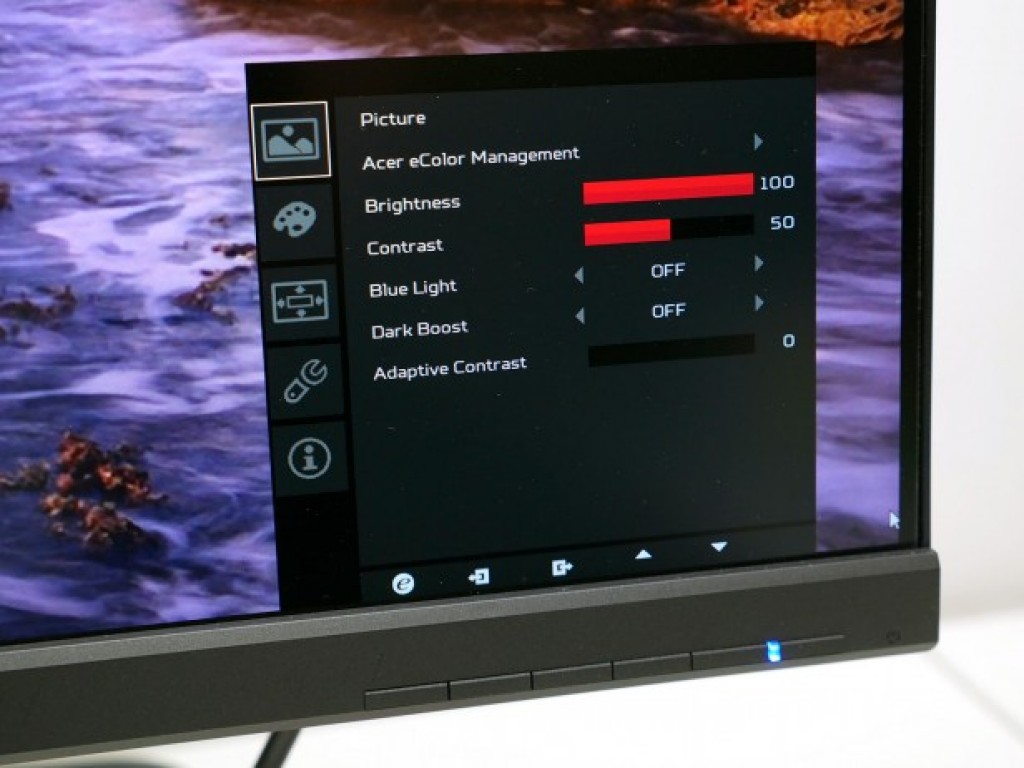 Rather more work is navigating the OSD, which uses a row of physical buttons on the bottom-right bezel. The unmarked buttons are physically fine, but the way they’re used with the menus is clunky; as far as which button does what, it never feels particularly intuitive.

It’s a far cry from the menu system on this monitor’s main rival, the Asus ROG Swift PG279Q, which uses a little joystick that’s absolutely effortless.

Thankfully, there isn’t too much cause to jump into the menus since the monitor arrives in a very good default setting, so aside from dropping the brightness down, you’re pretty much good to go.

This monitor is fantastic. It’s bright, has strong contrast and accurate colours, and the step up in the consistency of the image compared to any TN-based gaming panel is huge. Plus, as mentioned on the previous page, the out-of-the-box settings are fantastic.

All that’s required for image quality perfection is to reduce the brightness to around the 25 mark (150 nits) and you’re good to go.

If you do have a calibration tool handy then things get even better. Following a full calibration with DisplayCAL, I measured this display having a colour temperature of 6,545, 99.9% sRGB, 0.47 Delta E and gamma of 2.2. The only casualty being that contrast dropped to 922:1, which is still very good. 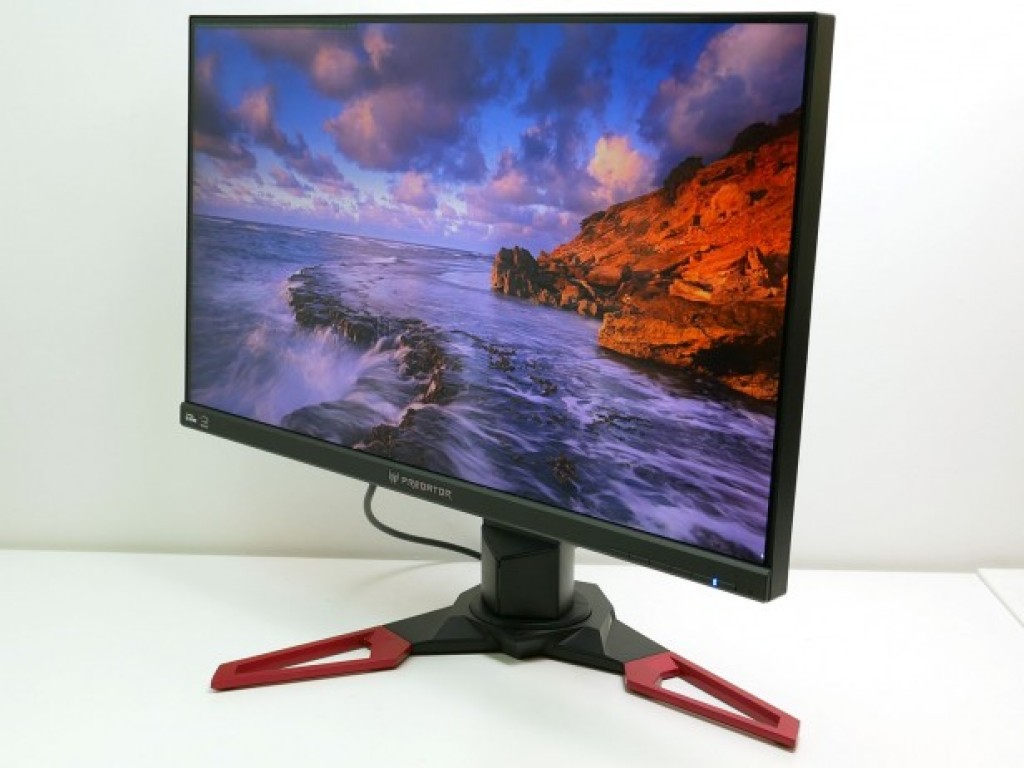 The uniformity of this display is decent, if not outstanding. In the top-right corner brightness drops by 9.92% compared to the middle, while colour varies by as much as 3.3%. Anything below 10% is pretty much imperceptible, but obviously that figure comes close. On average, though, the variation across the display is just 3.6%, so overall it’s fine.

Peer closely and there’s a slight softness to the image that puts it behind the best, more conventional 60Hz IPS screens-monitors such as the ViewSonic VP2770, for instance-but it’s a small enough difference to be negligible for most users. Only those seeking truly professional-class imaging displays will want more from their monitor. 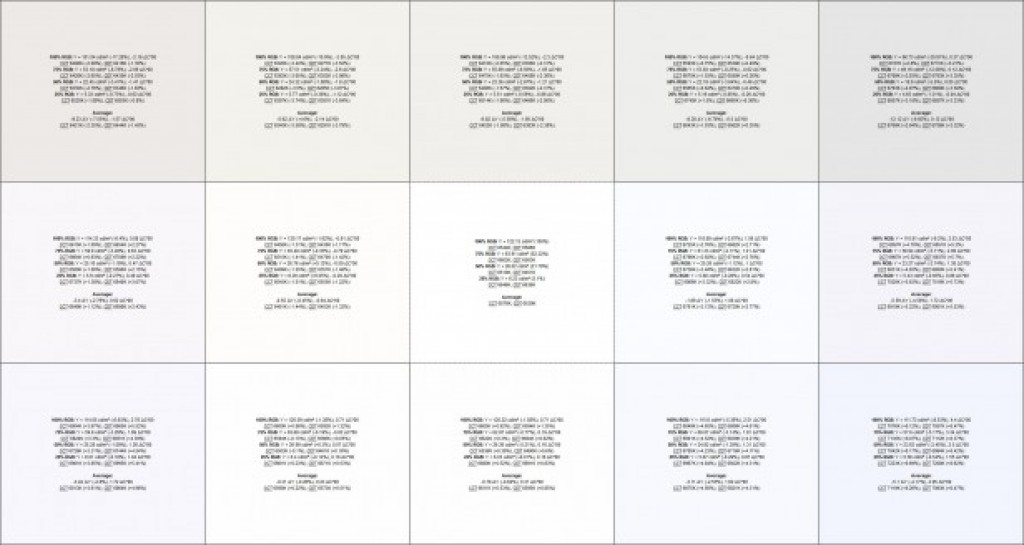 Testing for input lag is something of a pointless exercise on a high-refresh-rate monitor, as I only have a Leo Bodnar lag tester, which works at a maximum of 60Hz and using HDMI. Nonetheless, it recorded a figure of 12.8ms, which is plenty low enough.

As for that high refresh rate, it’s amazing! The combination of 165Hz refresh rate, IPS image quality and G-Sync creates simply the finest gaming experience you can currently get. Everything responds in an instant and you get a clean, crisp, high-quality image along the way.

In contrast, TN panels have relatively poor image quality, while 60Hz IPS panels feel so slow. What’s more, you don’t get the slight ghosting effect that plagued the AOC C3583FQ, which used a 160Hz MVA panel. 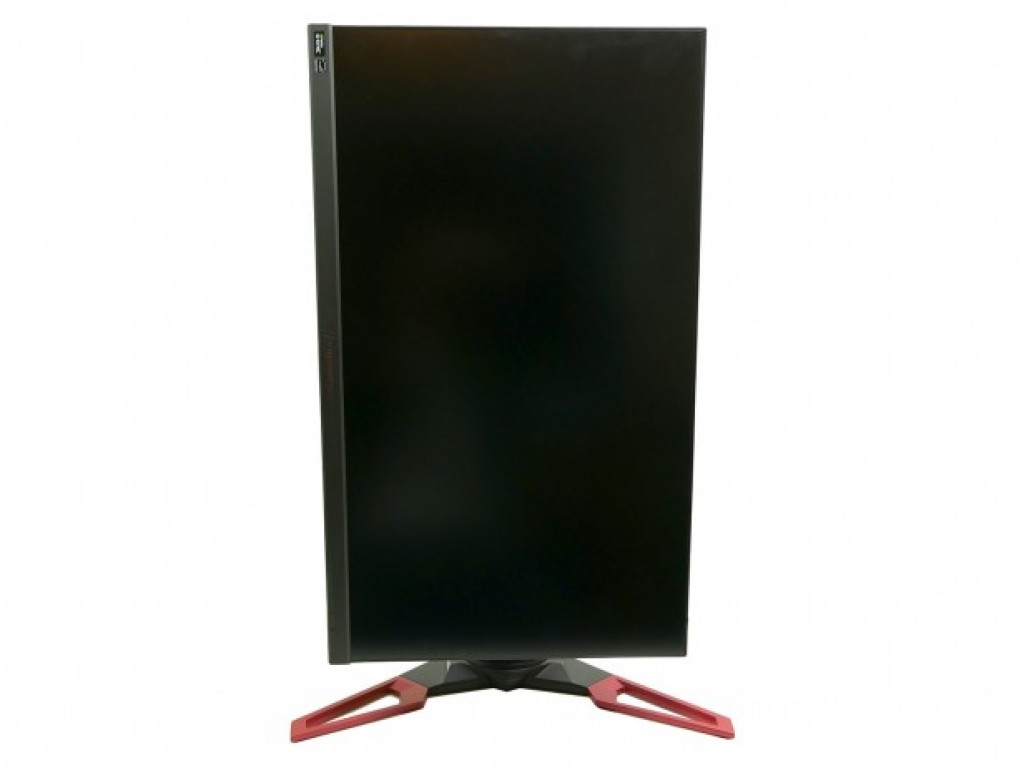 SHOULD I BUY THE ACER PREDATOR XB271HU?

Yes. If you’re an Nvidia gamer and you’re looking for the best gaming monitor you can buy right now then the Acer Predator XG271HU is it as is the Asus ROG Swift PG279Q. Both offer the same fantastic feature set and image quality, but the Asus has a slightly better design while the Acer is slightly cheaper, so it’s a bit of a toss up as to which you consider more important.

It’s also worth noting that both are markedly more expensive than equivalent displays that sport FreeSync. The Acer XF270HU and Asus MG279Q have pretty much the same image quality, but have cheaper stand designs. However, they’re both nearly 200 pounds cheaper than the G-Sync models. Of course, you need to be using AMD graphics to take advantage of their FreeSync capabilities however.

If you’re an Nvidia gamer then this is just about the finest gaming monitor you can currently buy. 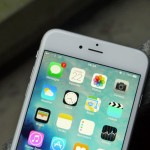 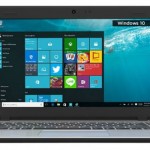 Don't miss a deal at Currys
Best offers at EE Mobile
Discounts, Sales and Deals at O2 Mobile
Save your money with Brian Tracy
Online-Shopping with Go Daddy
Best products at Farfetch