Acer’s revamped gaming systems mark a renewed focus on high-end performance from the global firm. Machines like the G3-710 bear the new Predator brand alongside some of the most outlandish design we’ve seen for ages. But can it help the G3 beat the competition to the title of best gaming PC?

The G3’s plastic facade looks like it’s taken inspiration from a tank track: the front is based around a huge angled section and decorated with smaller sections featuring lined, patterned areas. It’s a little less loud than the Predator G6 that it launched with, but it still makes for an eye-catching chassis. 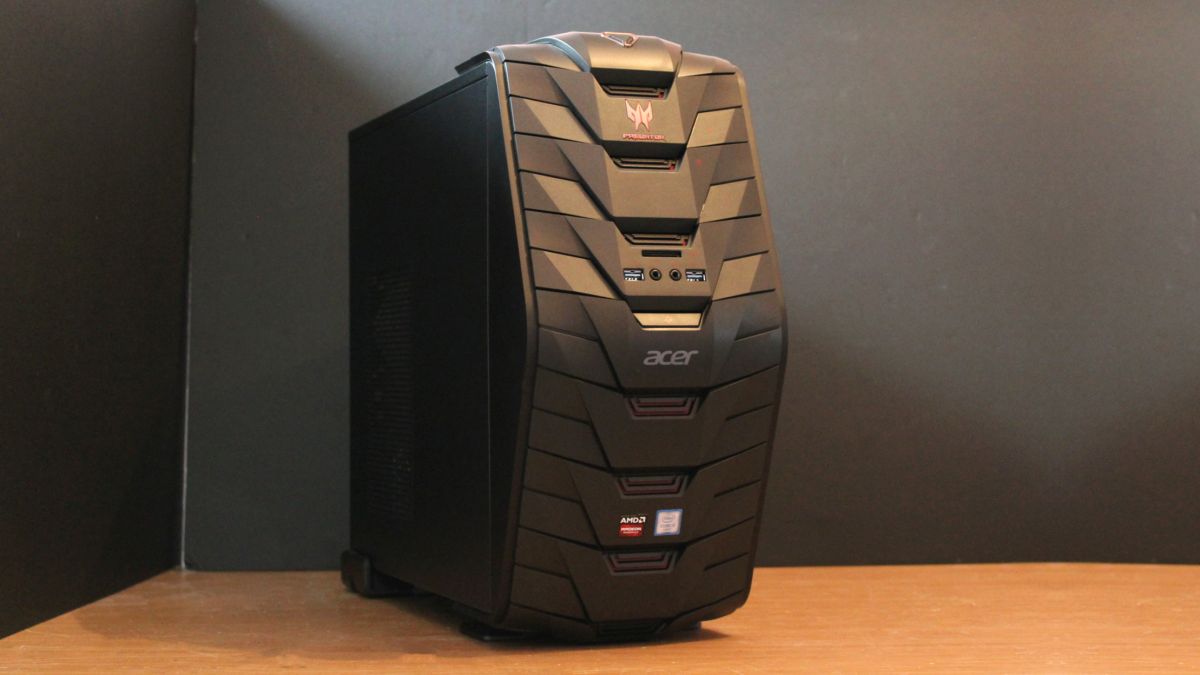 Two of the patterned sections swing open – one holds the DVD drive and the other an empty hard disk bay – and a third serves up USB and audio jacks. Acer’s Predator logo is front-and-centre, and the power button glows red.

The G3 looks the part, but its interior is disappointing. It’s made from unpainted, flimsy metal, and there’s not much room to grow – one hard disk bay and the front-facing 3.5-inch bay, two memory slots, a couple of PCI-E x1 sockets and one vacant SATA port.

It’s untidy, too: cables are left to hang in the middle of the case with only the most rudimentary attempts made to tie them down. The processor is topped by an underwhelming cooler, the graphics card is small, and the motherboard is an ugly shade of green.

The interior is a minor concern, as most people won’t upgrade this PC and opening the case voids the warranty, but it’s still worth a mention. 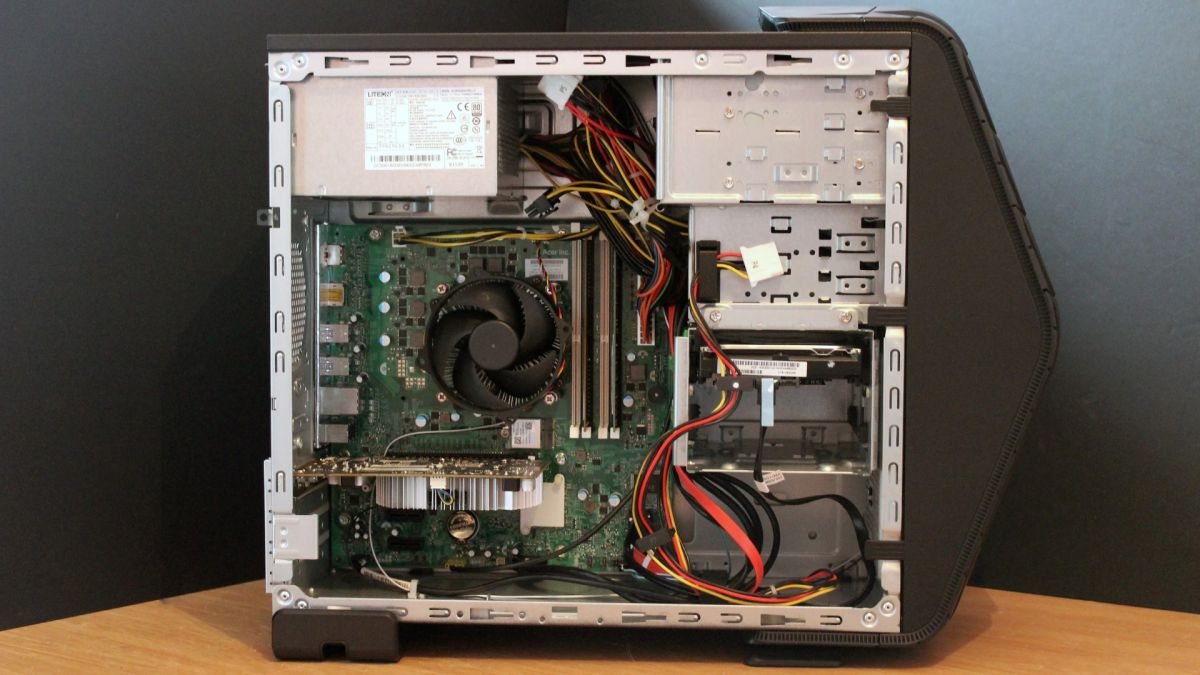 Unlike most gaming PCs, the G3 includes a gaming keyboard and a gaming mouse. They’re both Predator-branded, but the quality is inconsistent. 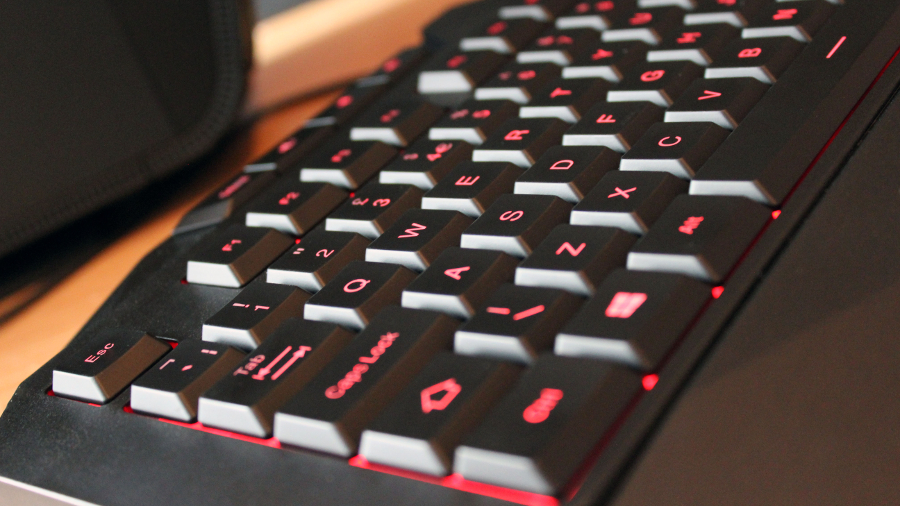 The mouse is better. Its two main buttons have the sort of snap and light touch we expect from big-brand gaming rodents, and it’s got thumb buttons and a DPI switcher. Those buttons aren’t bad, either – a little too soft, but that’s it. This mouse is easily good enough for gaming. 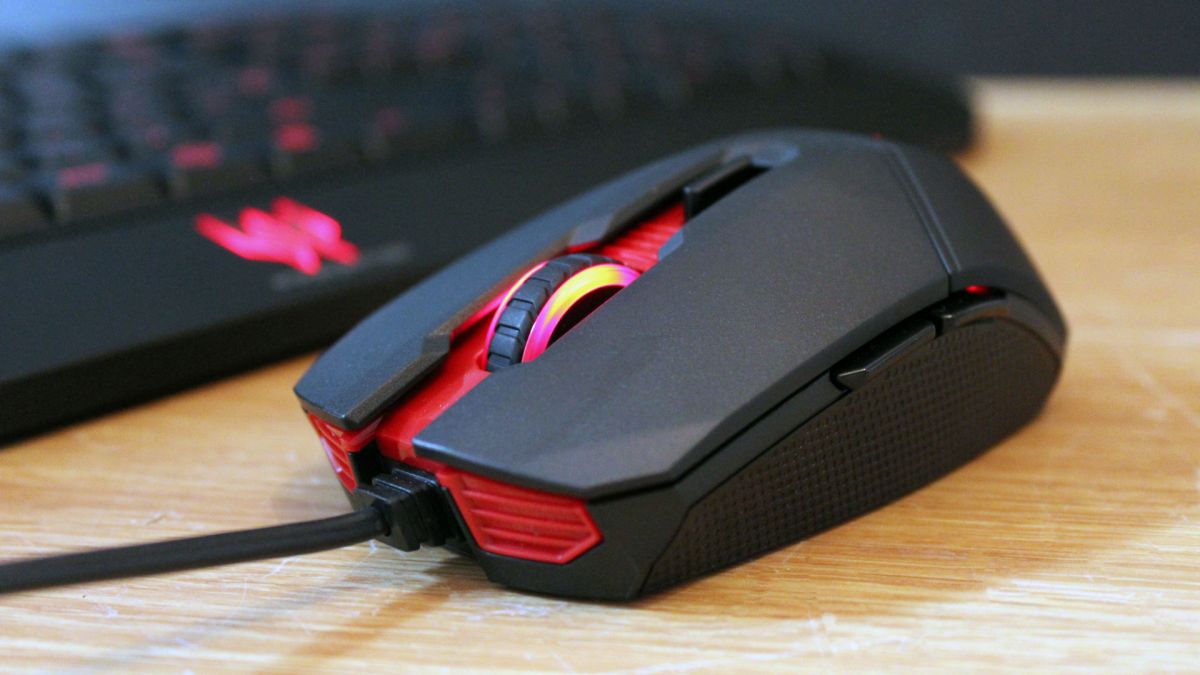 The keyboard is mixed. Its buttons don’t have the snap or firm feedback of proper mechanical gaming units – they’re softer and less defined. The unit has media buttons and a Game button, but at its core it’s not as good as the mechanical units favoured by serious players.

The key graphical component is the Radeon R7 360, which is the most modest consumer card in AMD’s current range – everything else from lower down the range is OEM-only. 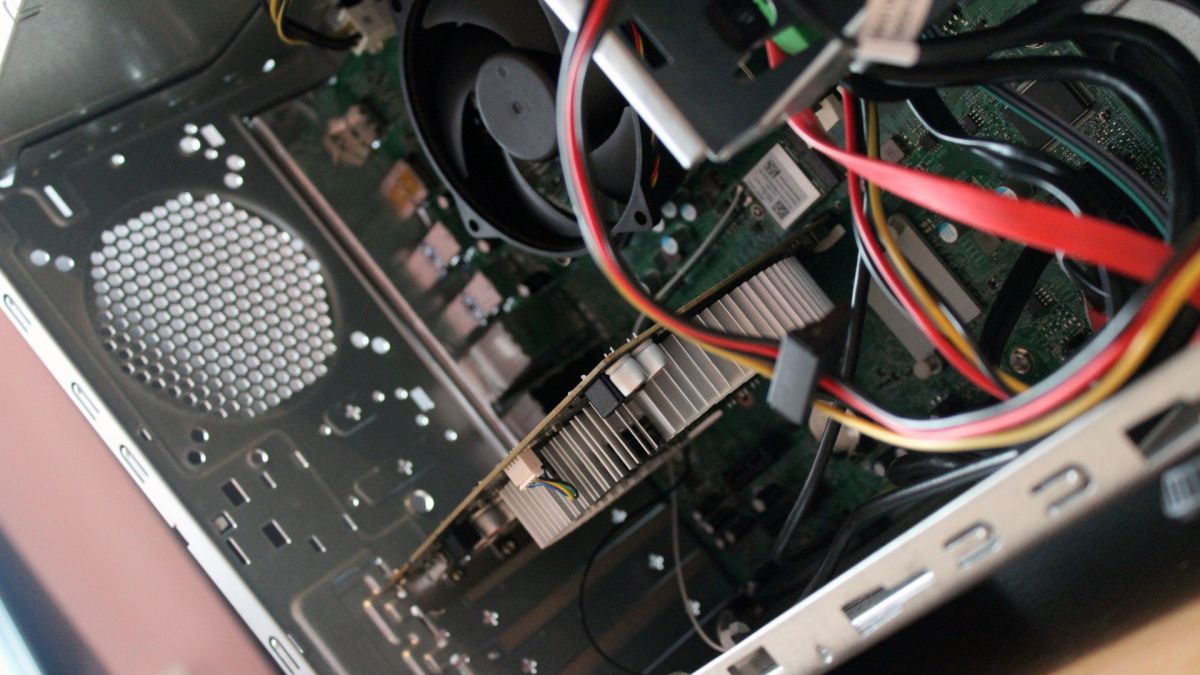 It’s paired with a Core i5-6400 processor. It’s another mid-range chip: four cores, but no Hyper-Threading or unlocked multiplier for overclocking. It uses the 14nm Skylake architecture and it’s clocked to 2.7GHz, with a potential 3.3GHz Turbo Boost peak.

This is backed up by 8GB of 2,133MHz memory, which is the bare minimum for a gaming PC these days. The final key component is the 1TB hard disk – that’s enough space, but it won’t be as quick as an SSD.

Here is the Acer Predator G3-710 configuration sent to techradar for review:

This $1,028 (£700 in the UK, AU$1,417) gaming machine is designed for 1080p playback at quality levels seen on consoles – or perhaps at slightly higher graphical settings, depending on the game. It’s got the power to handle those kinds of resolutions, but don’t expect 1440p playback out of this machine unless you drop quality levels.

Elsewhere, it’s business as usual. The Core i5 processor will have the grunt for most home tasks from web browsing to light photo editing, and the 8GB of memory is plenty.

Here’s how the Dell XPS 15 performed in our suite of benchmark tests:

The Predator G3’s best result came in Grand Theft Auto V, where it averaged 39 fps with the game running at its Very High settings – and it was only one frame slower when tasked with Bioshock Infinite at Ultra graphics levels.

The G3 hit 32 fps in Middle Earth: Shadow of Mordor, and was one frame slower in Metro: Last Light. Both of those games were running with their Ultra graphics settings.

It’s clear that this machine will handle the vast majority of games at 1080p and with high-end graphical settings. That means the G3 runs at higher quality levels than the consoles. 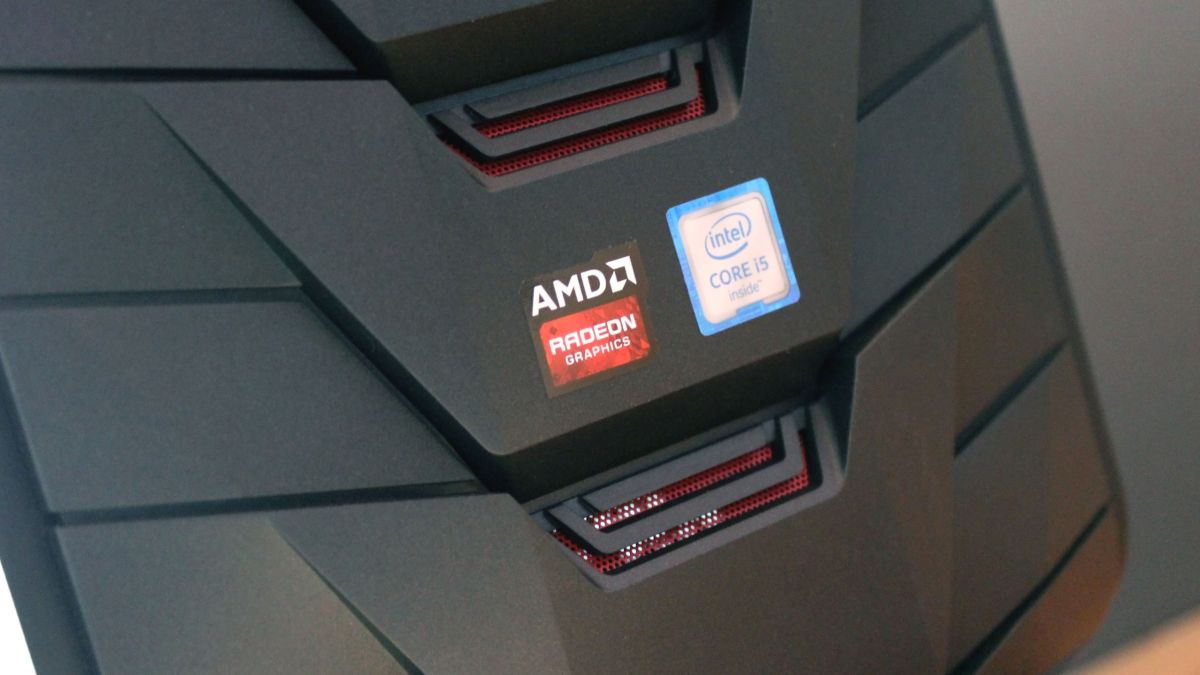 It’s not bad in application benchmarks, either. Its Cinebench result of 520cb is reasonable, and its pace of 4,215 in the PCMark 8 Home test is enough to keep home and lighter work applications running smoothly.

The Acer Predator G3 delivered these benchmarks while keeping the heat and noise down. The processor and graphics card’s peak temperatures of 71°C and 80°C are no cause for concern, and the G3 kept the noise down – it was almost silent when idling and barely any louder when playing games.

In other areas, though, the budget bites. The hard disk’s read and write speeds of 126MB/s and 124MB/s are sluggish – poor for a platter-based drive, and several times slower than even a cheap SSD. The Acer’s boot and game loading times will suffer. 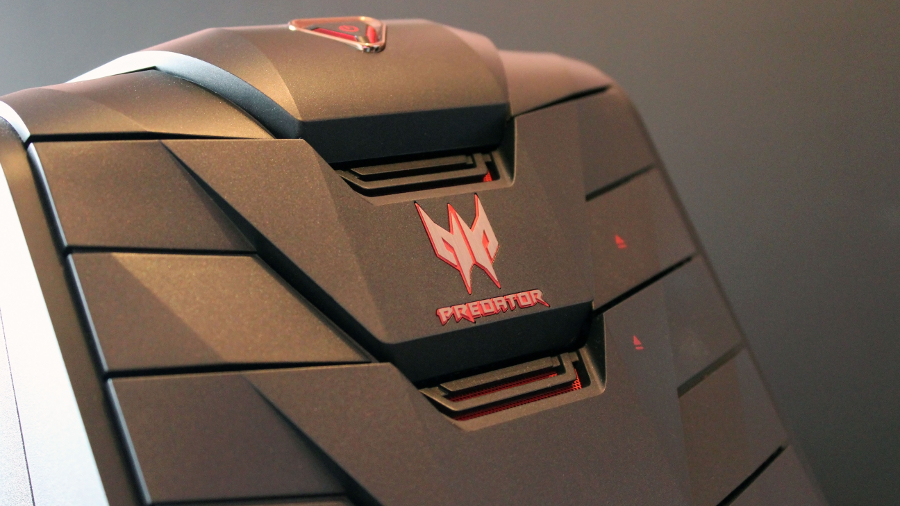 The G3 is a big-brand PC sold through the high-street, and that comes with caveats – most notably that there are smaller British and American companies producing far better gaming PCs.

We looked up £700 (around $971, or AUS$1,362) machines from UK firms Chillblast, Overclockers and Scan, and they’re all better than the G3 in several key departments. One of them has an overclocked Core i5 processor, and another has AMD’s Radeon R9 380 graphics card. 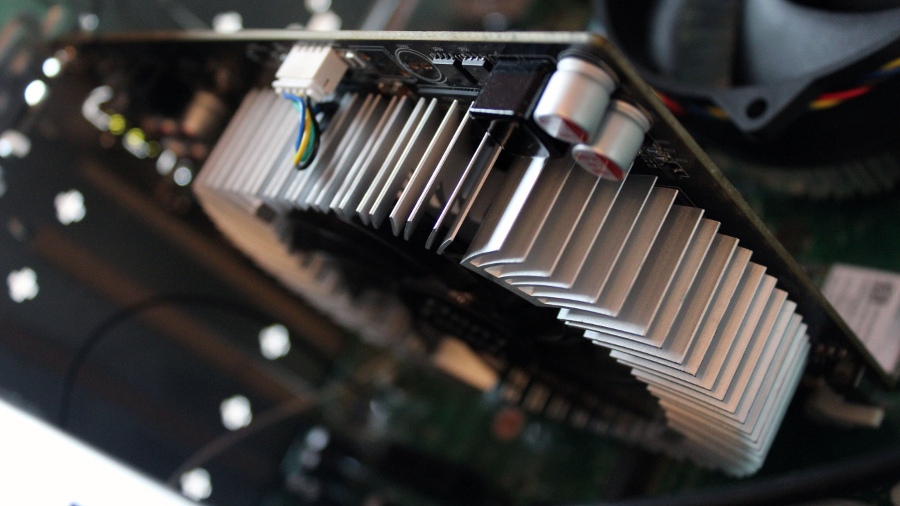 Some have SSDs, others have hybrid hard disks, and all have more versatile motherboards and enclosures. They all have longer warranties – the bare minimum here is a two-year deal – and that warranty isn’t voided by opening the case.

Acer set out to build a 1080p gaming desktop with the Predator G3-710, and it’s fulfilled that brief. The R7 360 bounded through games at 1080p with settings turned up high – it’s not going to struggle with any current game.

The tank-track facade looks striking and is sturdy, and Acer adds value by including good-looking peripherals.

The Radeon graphics card is a sensible choice, and it’s a fine 1080p chip, plus it’s affordable enough to fit inside this system without driving the price up.

The processor is good, too – it uses Intel’s latest architecture to deliver solid performance without bottlenecking the graphics card.

The case looks bold and has decent connectivity, and there’s Wi-Fi on the inside. The peripheral highlight, meanwhile, is the mouse: it’s got plenty of snappy buttons and fast, precise movement.

This system might play 1080p games without problems, but it’s hindered in many other key areas.

The memory is the bare minimum for this kind of machine, and the hard disk is slow. Everything connects to a motherboard that’s got limited upgrade potential and an ugly, underwhelming design.

The case looks reasonable from the front but it’s bare metal on the inside, with little upgrade room, and it’s untidy throughout.

It’s also undeniable that the $1,028 (£700 in the UK, AU$1,417) used on this machine would go further elsewhere. PCs from smaller firms will have better components in almost every category, better enclosures and more generous warranties.

The Acer Predator G3 fulfils its remit as a 1080p gaming machine, and that’s fine if the primary motivation for buying a PC is that it’ll handle single-screen gaming and look striking while doing it.

Look beyond the shelves of PC World, though, and this machine has big problems. Many of the G3’s components are underwhelming, the case is untidy and lacking in features, and its one-year warranty isn’t particularly generous. 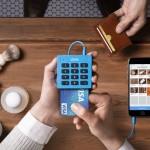 What's the best mobile card payment reader for your business? 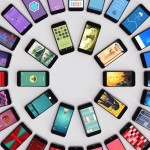 Don't miss a deal at TalkTalk Phone and Broadband
Best offers at Nike DE
Discounts, Sales and Deals at Ancestry
Save your money with Ticketmaster UK
Online-Shopping with Microsoft Store
Best products at Myprotein