Similar shape but no headphone jack

Apple’s gone for a polished, iterative phone and has succeeded in a number of areas – it’s a quality handset and not one that many expected given the leaks. However, there aren’t a lot of hugely standout features – but all the ones that were there now shine.

What’s new with the iPhone 7? Either a lot and very little, depending on what matters to you in a phone.

On the one hand, it’s now imbued with far superior sonic performance, a much better camera and a more pleasant-to-use screen – and now has no port to plug your headphones into.

On the other hand, barring some slippage of the antenna bands on the rear of the phone, this looks remarkably similar to the iPhone 6 and 6S that preceded it.

So, again, we’re in the position of having to work out whether the upgrades to the new iPhone are worth the money, or whether you can save some cash and stick with the iPhone 6S – after all, for a lot of people there’s a certain status to owning a new iPhone, and without a radical shape change, the iPhone 7 doesn’t offer that upgrade.

The iPhone 7 price is pretty typical, with just three choices once more. These are the 32GB model (thankfully the 16GB option, which was just too small to store today’s glut of large apps, is gone), a 128GB option and the top-of-the-range 256GB choice – which is pretty meaty, and unlikely to be filled by even the most ardent media-hoarder. 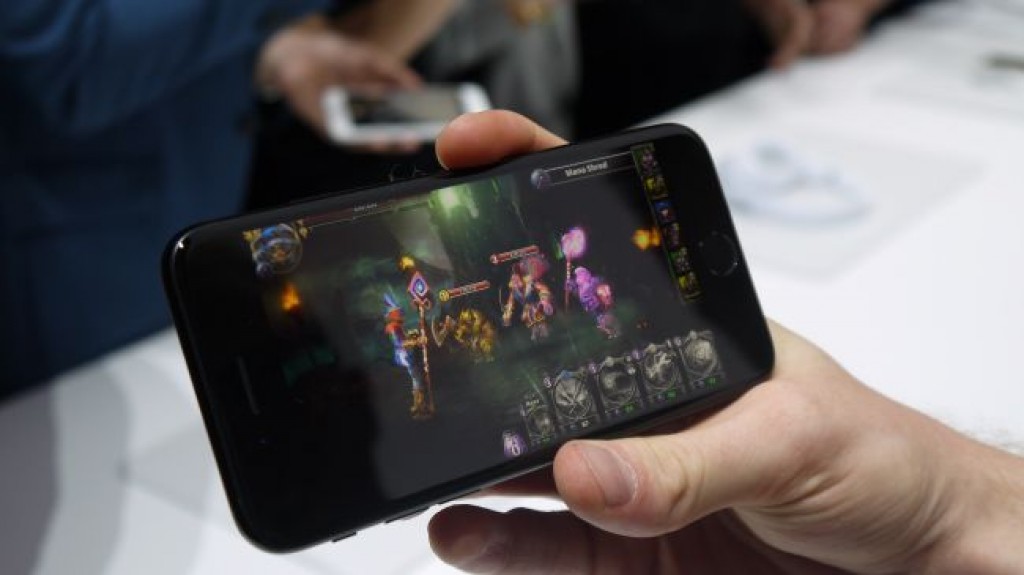 Whichever storage size you go for, the iPhone 7 release date has been predictably set for the week after the announcement, meaning you’ll be able to get your hands on one from September 17, with pre-orders starting September 9. If you’re thinking of queuing all night, take a blanket, okay? We don’t want you catching a cold.

When it comes to the look of the new phone, it might seem like Apple’s done very little to change the iPhone 7 design, and that’s true to a degree. 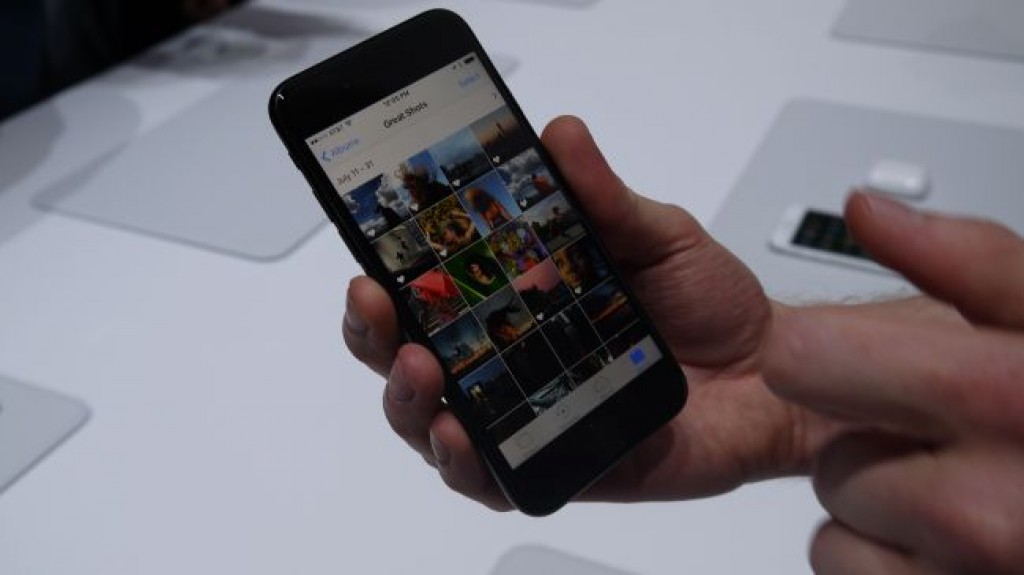 The iPhone 7, like the 4, 5 and 6 before it, was supposed to radically change the way the iPhone looks; however, the dimensions and screen size are nearly identical to last year’s model, meaning that if you plop a case on this phone you’ll struggle to tell the difference between phones from 2014 and 2016.

There are some big changes here, though, and let’s start with the biggest one: the loss of the headphone jack. 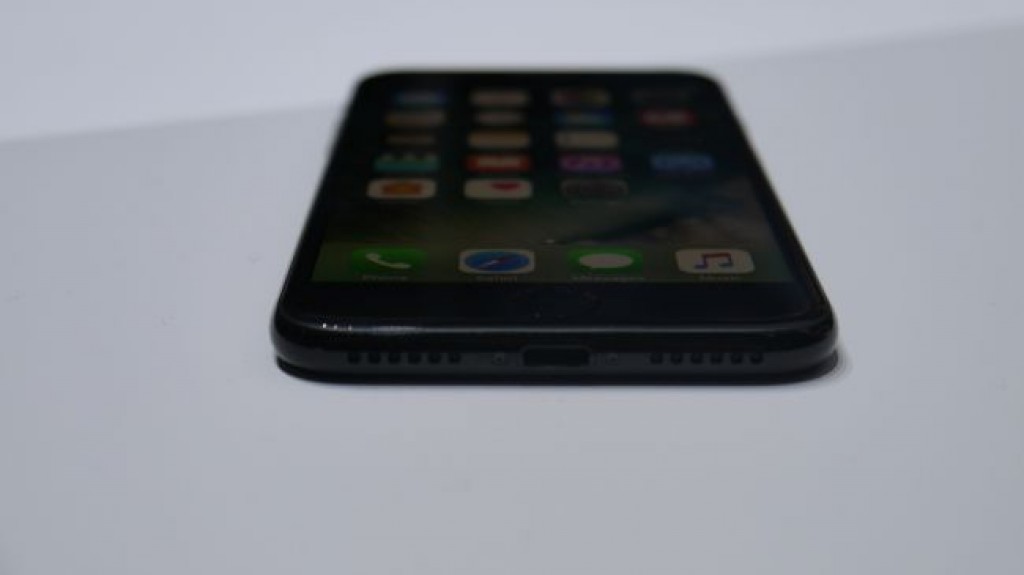 There are multiple theories as to why Apple has done this, ranging from the conspiracy-based (the company is just doing it to make money from the license fee manufacturers have to pay to create Lightning port headphones) to the helpful (the space taken up by the headphone jack means a thinner phone, and more space for battery).

Apple claimed in its keynote that it had taken “courage” to get rid of the “ancient” port – whether that’s good enough remains to be seen. 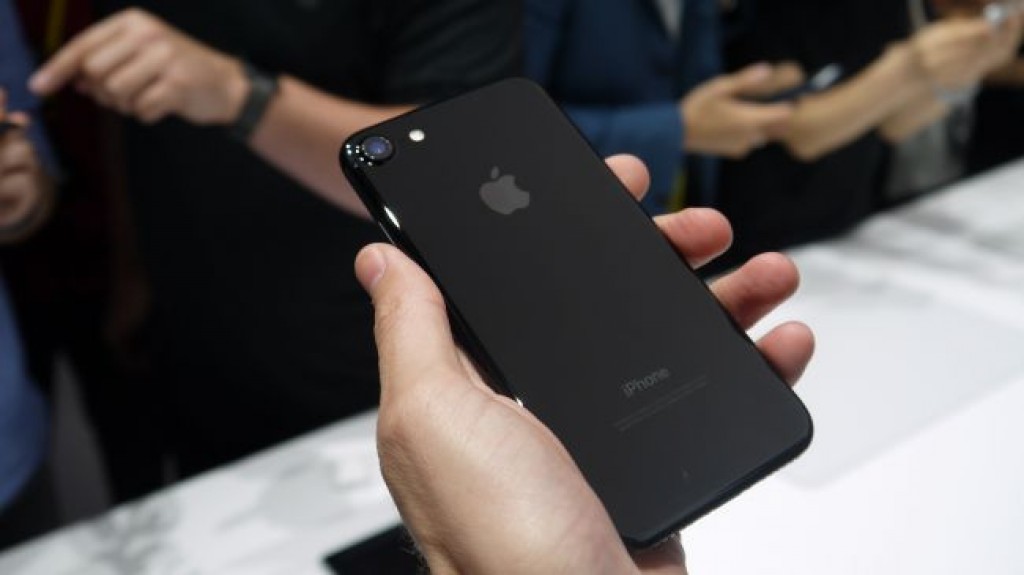 Either way, it’s gone, and that’s going to irritate a lot of people who haven’t prepared themselves for this moment, watching as Motorola’s Moto Z handset performed the same trick earlier in the year and didn’t seem to take too much flak as a result.

The good news is that the iPhone 7 will come with a Lightning to 3.5mm headphone jack in the box (ha, jack-in-the-box, just got that one) to help users make the transition – many of us have spent good money on decent headphones and don’t want to suddenly have to convert them to Lightning cables, and this will help smooth the process.

There’s also a pair of Lightning-powered Earpods, so you’ll at least not have to use the connector all the time, especially if you’re a fan of basic audio.

The look and feel of the phone is similar to iPhones of the past three years, with the edges nicely rounded and feeling smooth in the hand – there’s a good argument here for ‘if it ain’t broke…’, as Apple already had one of the best-looking phones on the market.

The Jet Black model we tried initially was shiny and had an almost plastic feel to it, although the other colors are more matte and traditional. The movement of the antenna bands on the back is a nice touch though – there’s something pleasing about the way the back isn’t as broken-up any more, with a solid plate of color looking back at you… you almost wonder why this wasn’t done originally when the iPhone 6 emerged, but there are a lot of engineering feats that go on under the surface of smartphones that probably explain that pretty easily.

Talking of colors, it’s nice to see the iPhone 7 now coming in Jet Black and just… Black, adding a new shade into the mix – and it’s probably the nicest of the lot. Sadly, this means Space Gray is now dead, so you’re still slightly limited in your choices

And the other big change: this thing is now water-resistant, with its IP67 rating meaning you can’t take it swimming, but you can fall in the pool and take it into the shower… if that’s your thing.

Apple hasn’t done away with the home button as some people predicted, but it has done something odd: made the button haptic, so that it vibrates under your finger, rather than clicking all the way in.

It still houses the fingerprint scanner, but this doesn’t function in the same way as before. 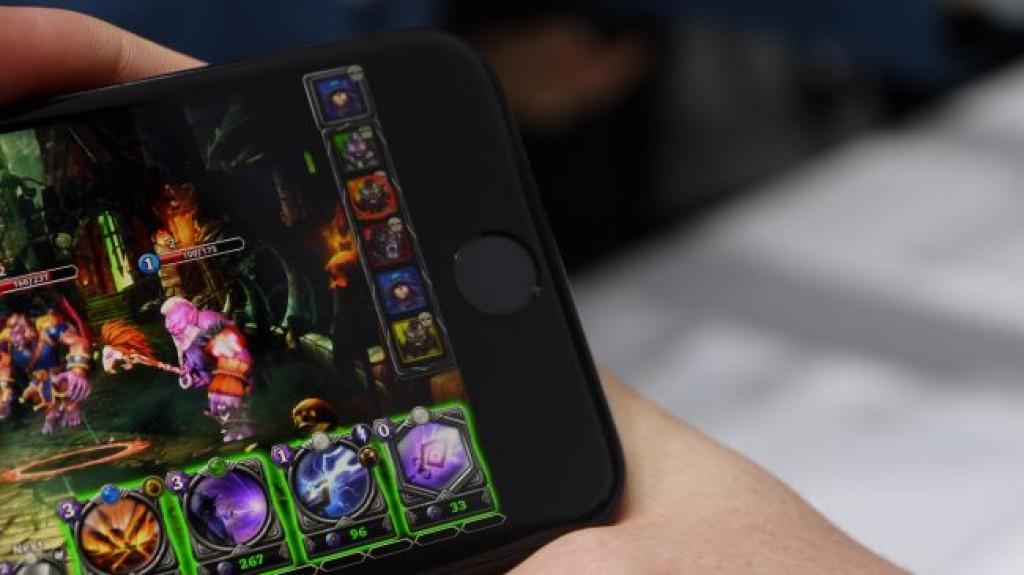 When you consider how iOS 10 works, with just picking up the phone firing the screen (so you can see your notifications) that makes sense here, but the lack of a tactile click is a tough one to deal with – you’ll get used to it, but there’s no doubt that it’s nicer to feel a comforting press.

Apple has been behind the curve when it comes to screen resolution for a number of years – and it clearly doesn’t care. The near-720p screen feels like a dinosaur in 2016, being seen on phones as far back as the early 2010s – but the sharpness doesn’t tell the whole story.

Apple’s use of LCD technology, the way the screen is bonded to the glass above, and the overall color reproduction are still excellent, and greatly offset the lack of sharpness – which can be seen in side-by-side comparisons with phones like the Galaxy S7. 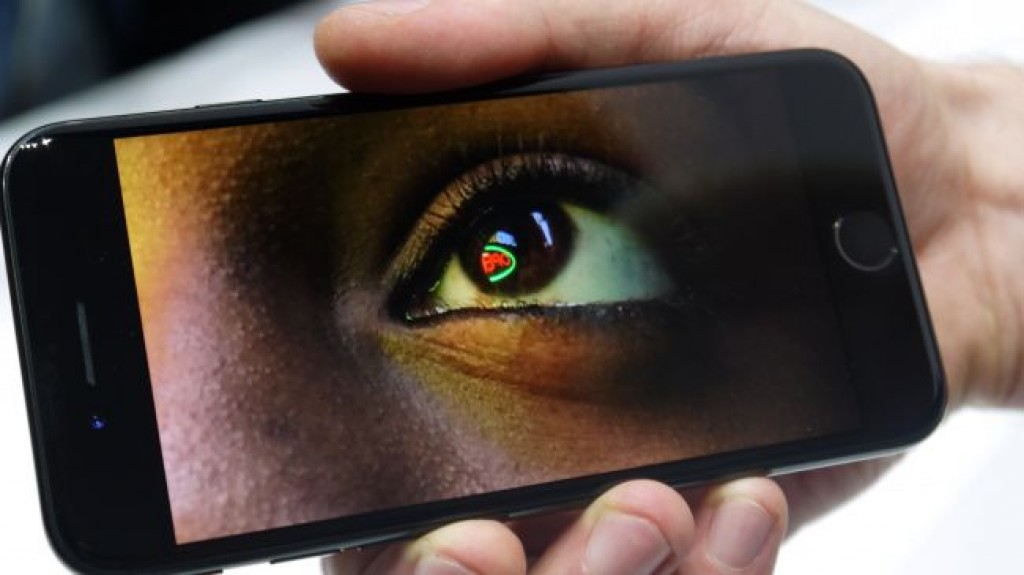 It once again shows that Apple isn’t thinking about adding virtual reality into the mix for at least another 12 months, as the amount of pixels on the screen right now just can’t handle it.

But, as mentioned, the iPhone 7 screen isn’t about the resolution, it’s about the quality, and bringing in the high color gamut that really is designed to make things pop off the screen.

However, in practice it’s hard to say that it really looks that different – the contrast ratios look better, sure, but it’s nothing mind-blowing. 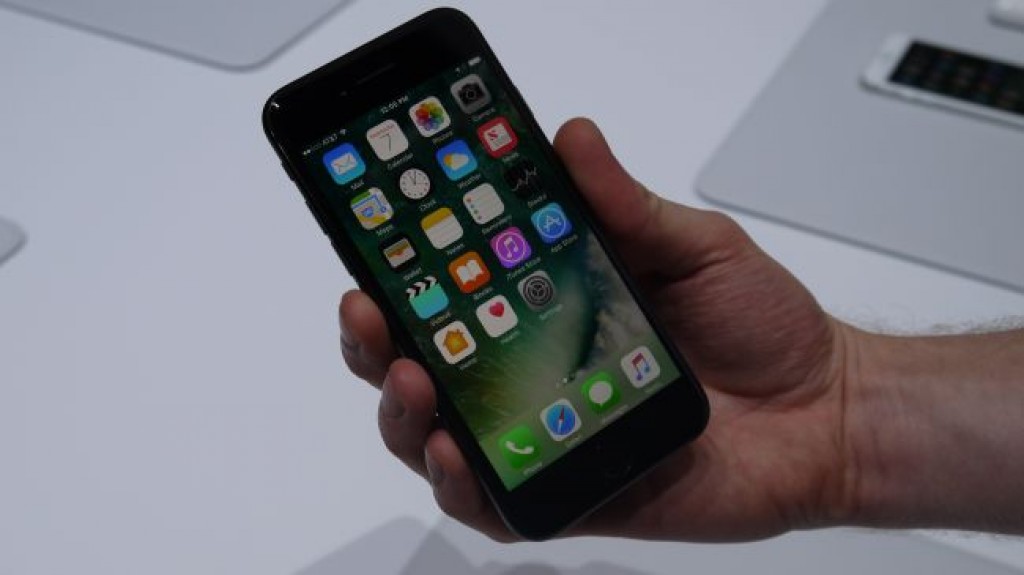 It still feels somehow cheap that there’s no upgrade to 1080p resolution, or a larger screen than the 4.7 inches we’ve seen the past few years; Samsung is easily showing the way here with QHD resolution, and it undoubtedly looks better.

There are arguments to be made for increased battery life through having fewer pixels to drive, but Apple should have improved things here, and solved that problem in the same way its peers have. That’s not saying ‘we want a higher spec for the sake of it’ – it would be a real improvement.

When we were guessing what Apple would make the central point of the iPhone 7, music was high on the list – after all, why would you get rid of the headphone jack if you weren’t going to offer an improvement in the sonic quality?

The Lightning port can carry a tremendous amount of data across to your headphones, and Apple has boosted the iPhone 7’s audio capabilities to match. 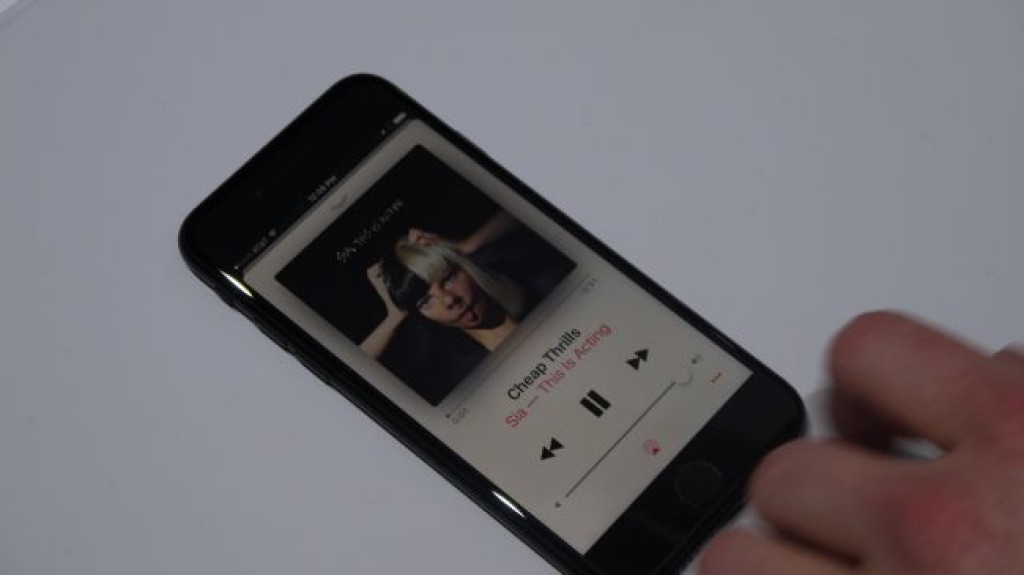 Let’s start on the outside first though: the new iPhone has dual speakers, rather than the single mono output at the bottom of the phone. These are positioned top and bottom to create decent stereo sound, and the different angles make listening to tunes or watching films a real treat.

When it comes to the internal sound quality, we didn’t get long to play with the iPhone 7 and properly assess its audio quality – that’s something we’re looking forward to doing in our full iPhone 7 review.

However, in terms of the abilities of the iPhone 7, we’re expecting some big tweaks inside to improve the quality of the output – and with a bit more research, find out if Apple has added in support for Hi-Res audio files.

That’s a big deal, given that the Lightning port can now handle the data transmitted from the better audio quality, and Apple has made a big deal about how this is a great way to get sound out of your phone into your ears. It didn’t convince us that it was any better though, beyond freeing up some space for the Taptic engine behind the home button. 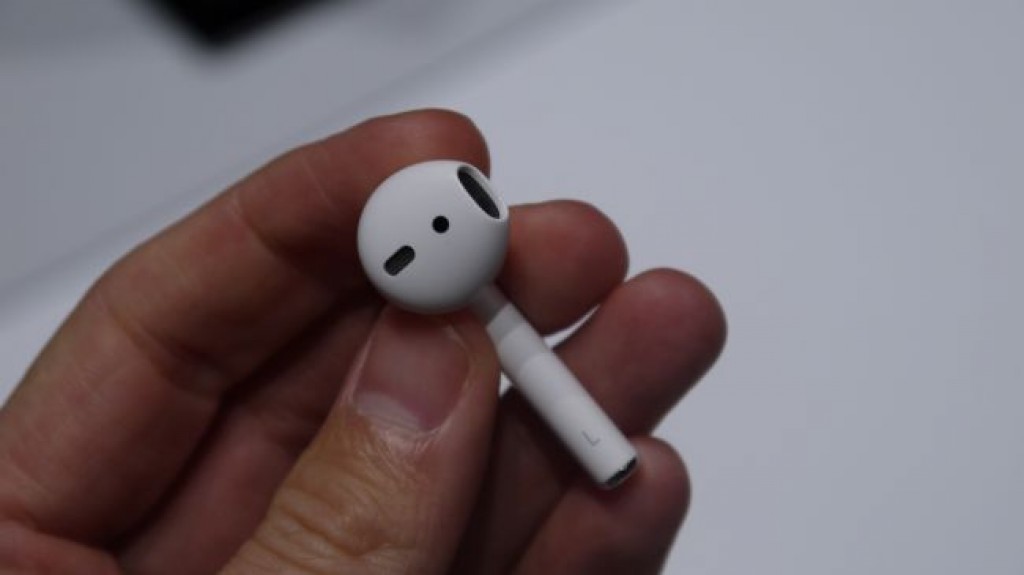 Apple has also unveiled another big change: its own proprietary wireless standard. This isn’t like the Bluetooth you know, a fact that’s illustrated by the new AirPods, which you connect just by placing them by your phone.

They’re wireless, but in all other ways they’re very similar to the current earpods, apart from their infrared sensors, which can tell when they’re in your ears. 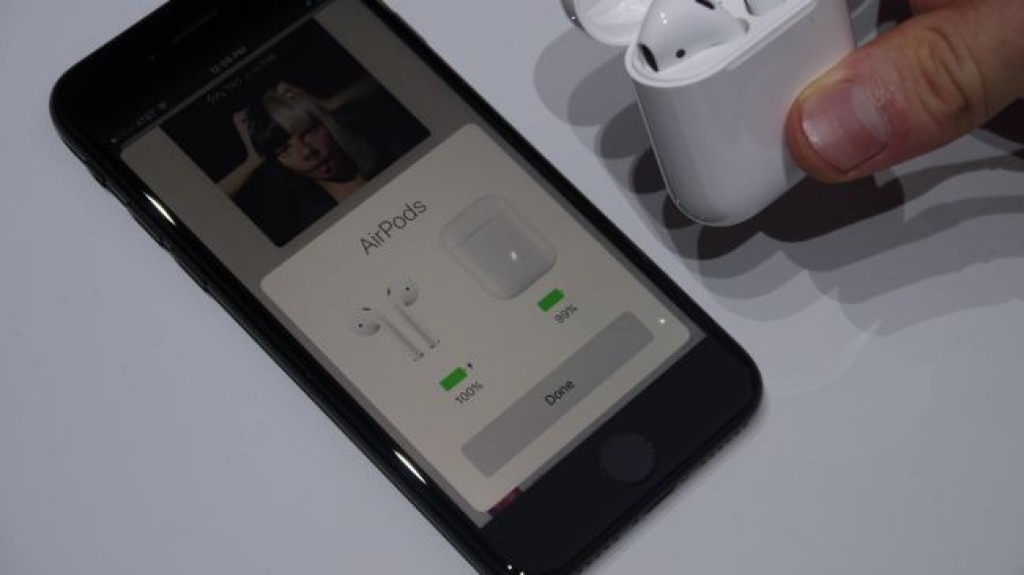 It would be a surprise if Apple has decided not to include Hi-Res audio support – while it’s beefed up the sound output of the iPhone 7, there’s currently no sign of the ability to play back the better-quality files that would really make use of the Lightning port in terms of clear audio quality.

Apple hasn’t really done a huge amount to the camera on the iPhone 7, although there are a few tweaks that will make a difference when compared to the iPhone 6S.

The first of these is cosmetic (for a good reason): the camera bump is now more pronounced than ever, which will irritate those who like to place their phone down on a table without a wobble. (Although let’s hope nobody goes as far as grinding off the protrusion to ensure a flush fit this time around). 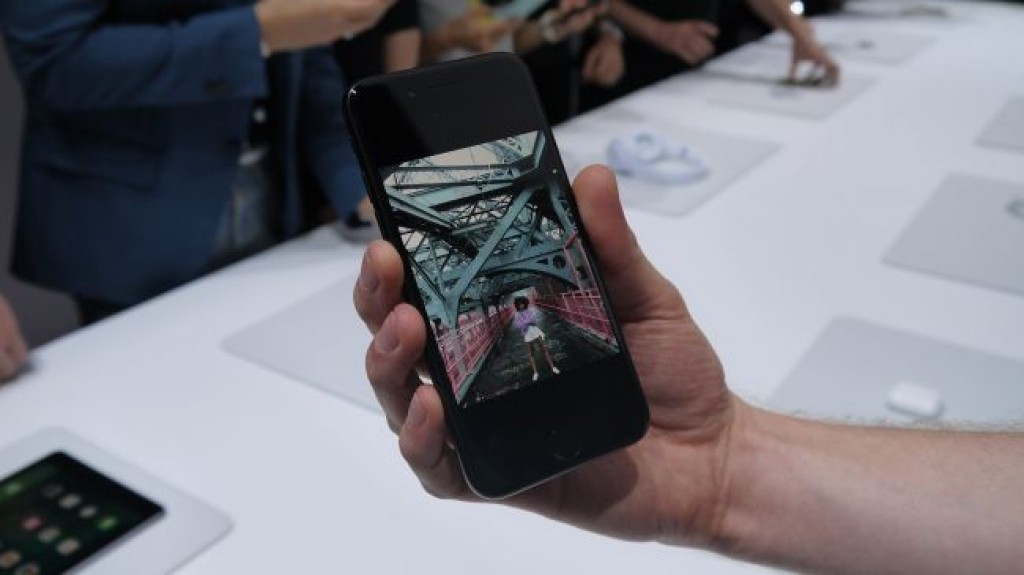 The snapper on the back of the iPhone 7 is still a 12MP affair, designed to take the best quality pictures without overburdening the phone’s engines. That upgrade, along with the larger sensor that’s resulted in the camera bump, means you’ll get improved low-light pictures, richer snaps in day to day photography and faster shutter speeds too. 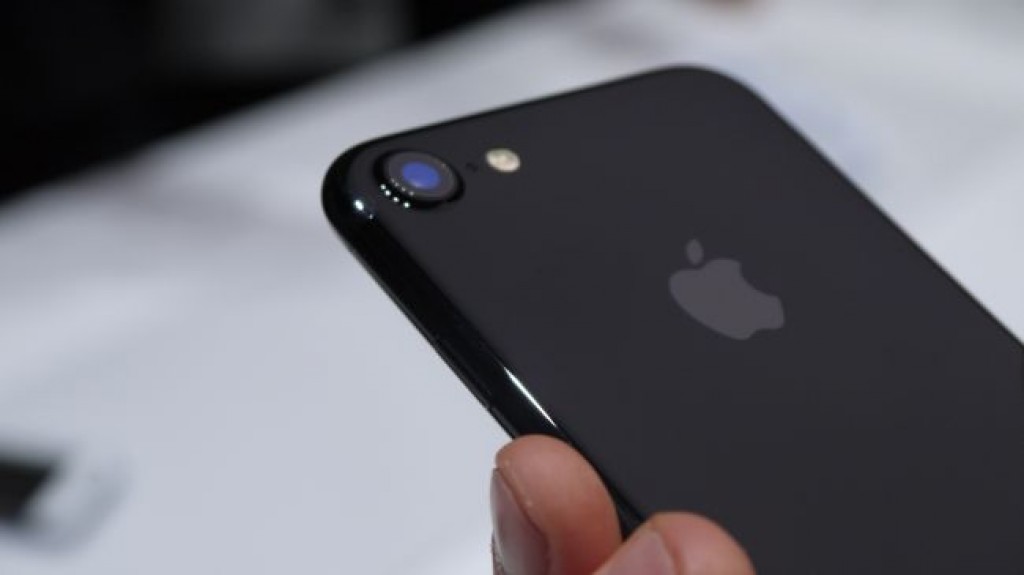 Live photos are obviously back, needed to make the automatic highlight reels that iOS 10 is offering up look more exciting. However, unlike the dual-camera setup on the rear of the iPhone 7 Plus, there’s not a lot more to talk about here – pictures are a bit better than from last year’s iPhone, but without the dual-camera array the iPhone 7 feels a little less exciting than its larger phablet sibling.

The front-facing camera has been boosted to 7MP, with some of the light-enhancing smarts from last year’s iPhone 6S rear camera too, to enhance the ability to take selfies.

Apple has increased the battery life of the iPhone 7 compared to its predecessor, which is the least you’d hope for given that the shape hasn’t changed much. However, there was actually a slight battery life drop from the iPhone 6 to 6S (to allow for the 3D Touch screen), so there’s no certainty that the new iPhone will extend battery life. 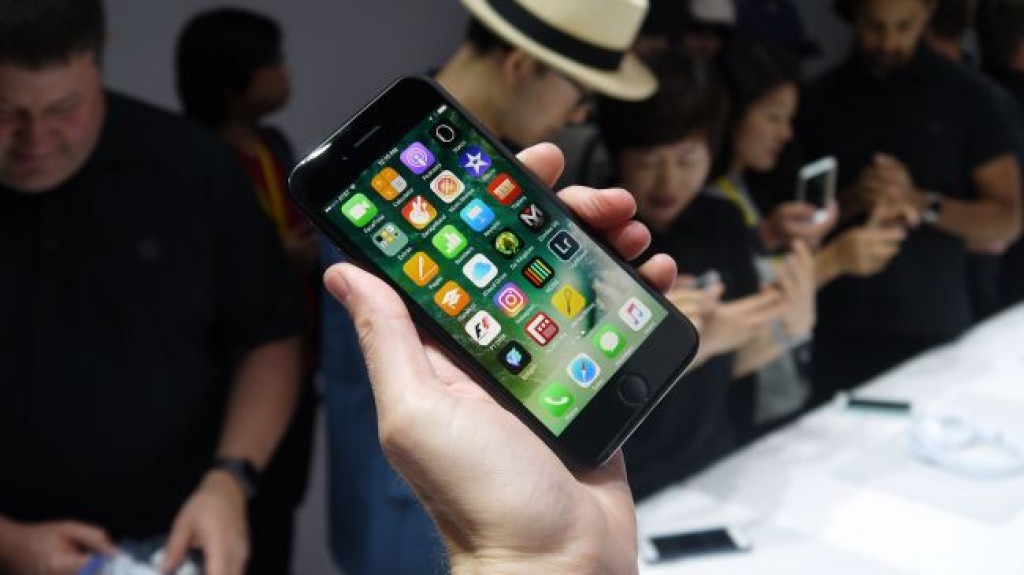 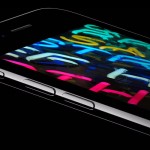 Brexit has made the iPhone 7 more expensive for you 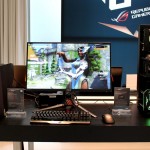 Don't miss a deal at Mobiles
Best offers at Vimeo
Discounts, Sales and Deals at Carphone Warehouse
Save your money with Newegg
Online-Shopping with Go Daddy
Best products at Adobe