What actually is Anthem? BioWare’s new upcoming IP looks like a change of pace for the makers of Dragon Age and Mass Effect, with a focus on cooperative PvE combat popularised by the likes of Destiny.

It was a big surprise when it was first announced at last year’s E3 2017, and with pressure mounting on a game that could make or break the developer’s fortunes, BioWare has kept its cards close to its chest.

From the short trailer shown at EA Play keynote we got a tiny glimpse of the game world’s wall: the only thing that separates the civilized world from a dangerous and savage animals. Flying exosuits (called ‘Javelins’) also seem to play a big part in surviving in the wilderness, and a player might jump into them as part of the game.

But what is this Anthem we keep hearing about? We don’t know much about the artifact at the heart of the BioWare’s new game but, according to the studio’s director Casey Hudson, that’s going to change before the game goes out in February.

Our first peek at the Anthem came during The Game Awards … which you can now view for yourself below.

Want more backstory on Anthem? BioWare has been cagey with details, but according to studio head Casey Hudson, that’s intentional.

To start filling in some of the mysteries of the world, BioWare has just released a new trailer that debuted during The Game Awards on December 6.

Check it out for yourself below.

E3 2018 brought a brand new cinematic trailer for Anthem which shows the incredible exosuits in action, with some smooth flying and a look at the sort of enemies you’ll be taking on with your team.

You also get a first look at the Scars, an insect-like race you’ll be battling throughout the game world – though we’ve also heard of another opposing warlike faction called Dominion who should pose a considerable threat of their own.

For those worried about the somewhat generic ‘mech suit’ design in the trailer, there will reportedly be a lot of room for customization and cosmetic upgrades (no loot boxes, thankfully).

When it was first announced at E3 2017, Anthem was slated for a Fall 2018 release… but then the game got delayed.

We now have a new, firm exact date in hand: February 22, 2019. The release date comes after a report emerged from Kotaku that the game will be delayed until early 2019, citing three sources close to the project.

There is, the report says, now a feeling in BioWare that the future of the company is tied to Anthem and its success. It’s for this reason that work on the studio’s other titles, Star Wars: The Old Republic and the next Dragon Age, is now reportedly being done by much smaller teams.

It’s unlikely, however, the EA will allow development to delay the game any later than March 2019, as that’s when the company’s fiscal year ends.

Anthem’s public pre-launch demo begins on February 1. The beta is only available to those who pre-order the title, or are members of Origin or EA Access.

Commander Shepard will live on

However, Gamble didn’t release any details about when or how this skin will be made available to players

It will support 3D Audio

Through the PlayStation Platinum headset.

It’s going to be a graphically-demanding game

As earlier rumors suggested (see below), Anthem was indeed shown off at this year’s E3, and it was a stunning looking game that ran in 4K resolution and 60 frames per second. That’s all very impressive, but what kind of machine will you need to play Anthem at that kind of graphical level?

Well, according to Mark Darrah, the game’s executive producer, the E3 demo was running on a PC with two Nvidia GTX 1080 Ti graphics cards. While we expect Anthem to get optimized before its release, we’d still expect you to need a powerful PC to play at 4K and 60FPS. EA hasn’t confirmed if the Xbox One X or PS4 Pro will be able to match that performance.

EA Play brought us the best look at Anthem that we’ve had yet. What we learned is that the game is considered by EA to be “the evolution of a Bioware game” that doesn’t bolt on story content to a multiplayer game, but rather integrates those things together in a shared world. It’s a little different from the standard BioWare fare since it seems it won’t have any player romances available.

You play as a ‘Freelancer’ who can control the exosuit that we’ve seen, and you’re tasked with protecting the people of Tarthis from a force trying to control the Anvil of Creation. The world is reshaped all the time and, because you’re a pilot, you can change out your suit depending on your mission. Exosuit types include the Ranger, Colossus, Storm and Interceptor.

We learned that the game won’t have loot boxes and will instead be an online world that expands with more stories as time goes on. Part of the condition of this, however, is that the game won’t be playable offline. After the show Mark Darrah confirmed on Twitter that “you need to be online to play” adding that there will also be no PvP modes available at launch, if they’re being considered at all, since he added that it’s not guaranteed.

Darrah also responded to fan’s queries online, saying that players could create multiple Freelancers for each user account, and would be free to use any of the four exosuits that had been showcased. 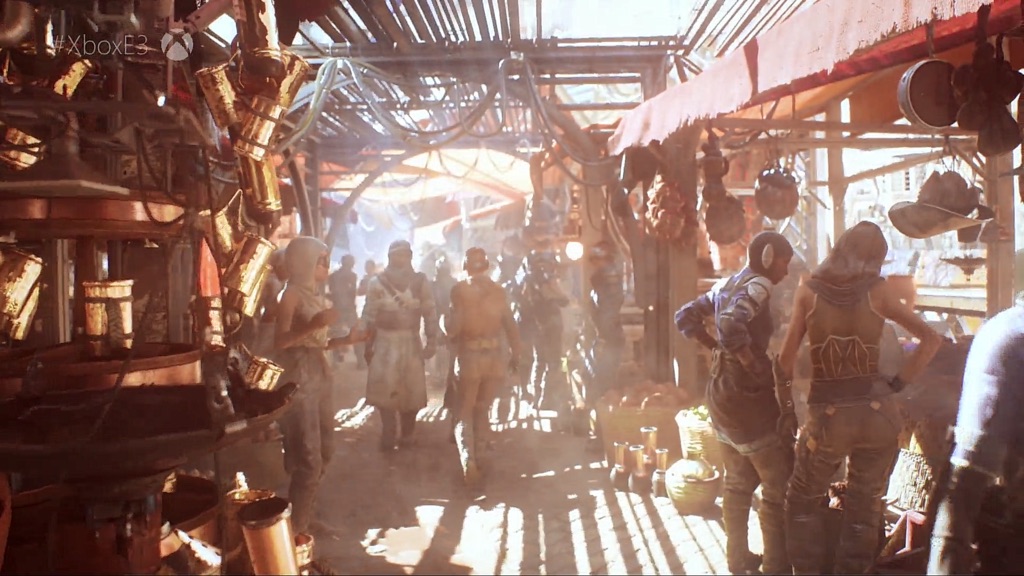 It’ll have a big focus on story

Anthem’s developer BioWare has promised a big story for Anthem after Mass Effect Andromeda fell short of fan expectations. Writing in a blog post, the studio’s general manager Casey Hudson emphasised the importance of world, character and storytelling and promised that they would be a part of Anthem, “a game designed to create a whole new world of story and character that you can experience with friends in an ongoing series of adventures.”

Hudson goes on to say that though it will be unlike “anything you’ve ever played”, if it’s done as planned it will still feel “very distinctly BioWare” – and that he’ll continue using the blog to update fans on the development process of the game.

Our World, My Story

One of the ongoing refrains from Anthem’s development is the idea of ‘Our World, My Story’. For players, that means your time will be split between the outside world – a shared multiplayer environment where you team up with other Freelancers for exploration and combat – and Fort Tarsis, where you develop a single-player experience unique to you.

Fort Tarsis will act as a home hub of sorts, where you face your own decisions and actions, accept contracts and missions, form platonic relationships, and generally act out more of the role-play elements expected from BioWare’s usual IPs. By the sounds of it, events in the outside world will affect the individual experiences you have back at the Fort, though how this spins out is anyone’s guess.

EA meets its Destiny in Anthem 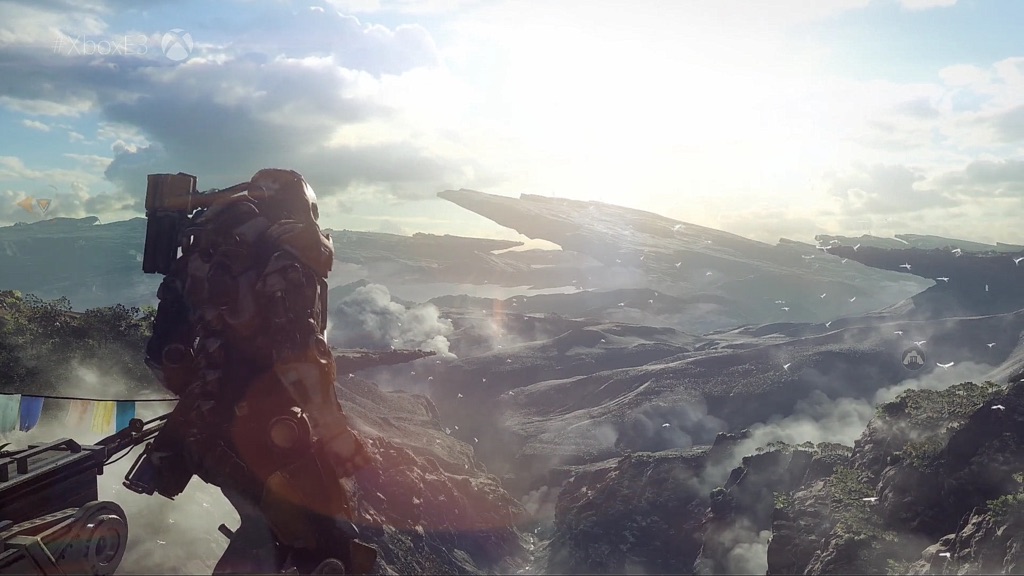 The premise we know so far is that humanity is holed up in a bastion, cut off from the outside world. Venturing out, it appears, requires a suit of armor that will help fend off the wilds of the Pandora-esque planet.

EA is describing it as “a shared-world action RPG where Freelancers challenge the wilds past the wall, exploring a vast world filled with savage beasts and ruthless marauders, but also teeming with amazing technology and forgotten treasures”. If this sounds like Destiny, you’re not crazy.

“Players will be able to join with their friends to unravel the world’s mysteries and defeat the forces plotting to conquer humanity.”

Okay, this is Destiny.

“Throughout their journeys, players can outfit their Freelancers with powerful Javelin exosuits, each of which are equipped with unique weapons and abilities. Freelancers can customize their Javelin with gear they earn and craft throughout the adventure, and leave a lasting mark on the world”.

Admittedly, the word Freelancers make the game sound a bit more like a Borderlands game than Destiny, but considering that your class is determined by which Javelin you have on, we’re still seeing Destiny written all over it.

When Anthem was first announced, taking on Destiny 2 seemed like a tall order, but now that Destiny 2 appears to be having some growing pains, Anthem may be able to seize on a dissatisfied playerbase.

Anthem will be BioWare’s first title after the somewhat polarizing Mass Effect: Andromeda.

Anthem will, apparently, be a science fantasy game more in the vein of Star Wars and offerings from the Marvel universe, rather than hard core science fiction title like Mass Effect BioWare Edmonton general manager Aaryn Flynn has revealed.

In a recent interview with CBC Flynn said that like these franchises Anthem will be a game in which “you see a lot of amazing things happening but we don’t worry too much about why they are happening or how they are happening; the science of it.“

BioWare has dipped its toes into the science fantasy genre before with titles such as the RPG Star Wars: Knights of the Old Republic and the online multiplayer game Star Wars: The Old Republic. Anthem will, apparently, be along these lines and “much more about just having fun in a game world that is really lush and exotic and really sucks you in.” Unlike Mass Effect, which Flynn says was a “more a real hard core science fiction IP”.

Taking this into account, alongside the game’s more online multiplayer leanings, and it seems like BioWare is certainly attempting to step into a space currently dominated by games such as Destiny. It’ll be exciting to see what else a developer with so accomplished a background in lore-heavy single player storytelling can bring to this genre. 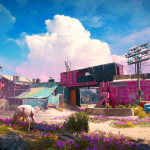 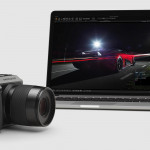 Don't miss a deal at Farfetch
Best offers at TalkTalk Phone and Broadband
Discounts, Sales and Deals at Microsoft Store
Save your money with Newegg
Online-Shopping with EE Mobile
Best products at Boohoo