Shure has been a mainstay in recording studios and on concert stages for 95 years. The company’s latest contribution to its rich legacy is the Aonic 50 active noise-cancelling (ANC) headphones. These $399 headphones promise audiophile quality, exceptional comfort, superior ANC performance, and some of the deepest Bluetooth codec support you’ll find anywhere.

The Aonic 50 are beautiful headphones. Imitation leather dominates the headband and ear cups, while soft-brushed aluminum arms connect the two. The click-adjustable arms open and close with ease; yet once locked in place, they’ll stay exactly where you placed them. You’ll often face a trade-off with easy-to-adjust headbands; not here, I found the pressure on my head to be near goldilocks perfect.

The imitation leather wrapped around the Aonic 50 is soft and luxurious. The headband is amply padded and didn’t produce any excess pressure on the top of my head—even after extended wear. The ear cups likewise are soft and comfortable.

The only drawback I found was breathability. These headphones made me hot and sweaty after extended listening sessions. The effect will be exacerbated if you use the Aonic 50 in hot or humid environments, though your body might react differently. 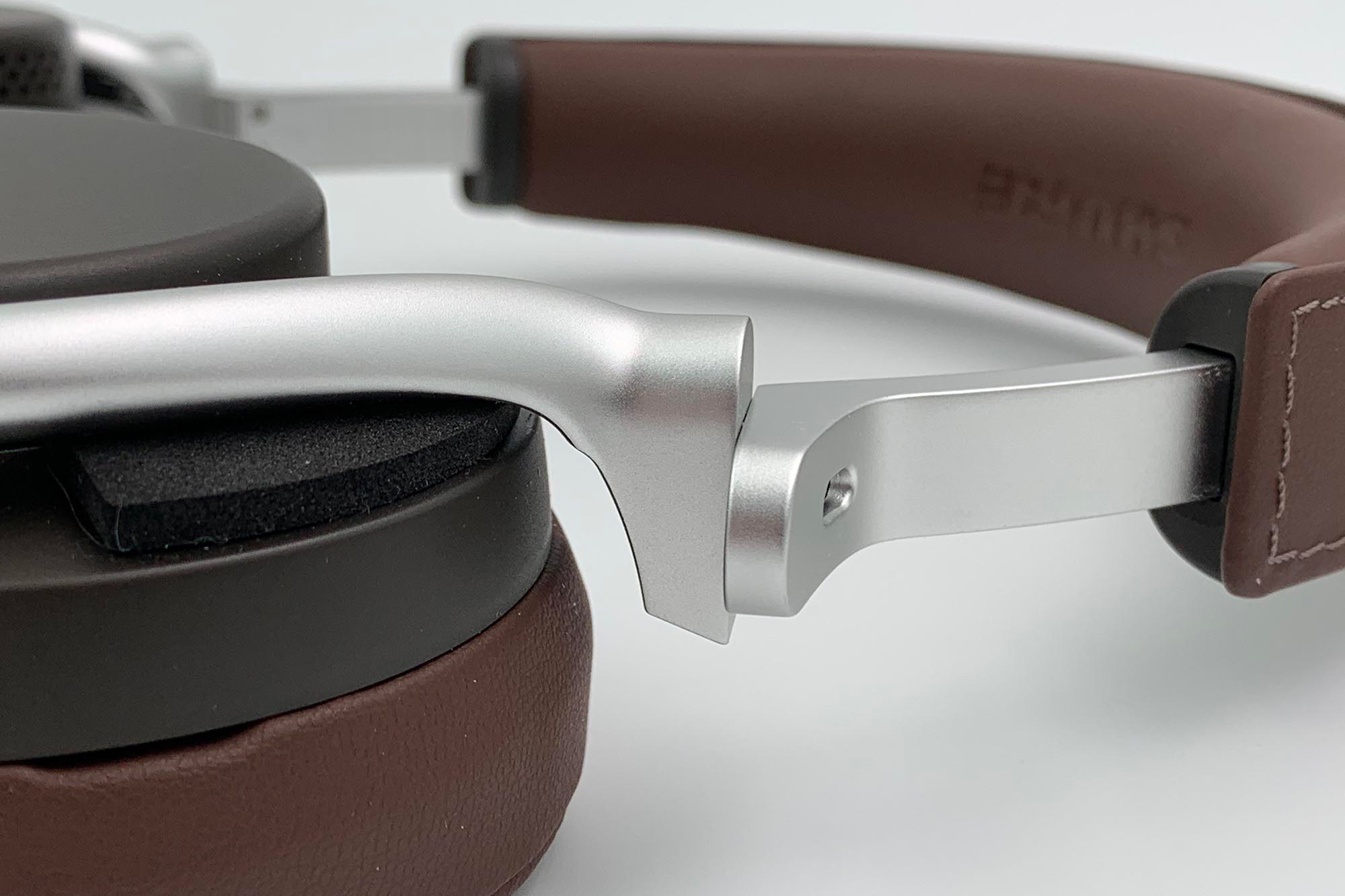 The ear cups fold flat for travel and storage, but they don’t collapse further like some of the competition. The included carrying case is spacious but completely impractical for travel—it’s downright massive.

Battery life is rated to last for a respectable 20 hours. With some of today’s wireless headphones pushing 24 to 30 hours plus, this is at the lower-end of the spectrum. That said, in real world usage, you can easily go two to three days of extended listening or Zoom conference calls without ever needing to charge the headphones. Moreover, re-charging the headphones is fast. Just five minutes of plug time will easily get you out of the low-battery warning range. 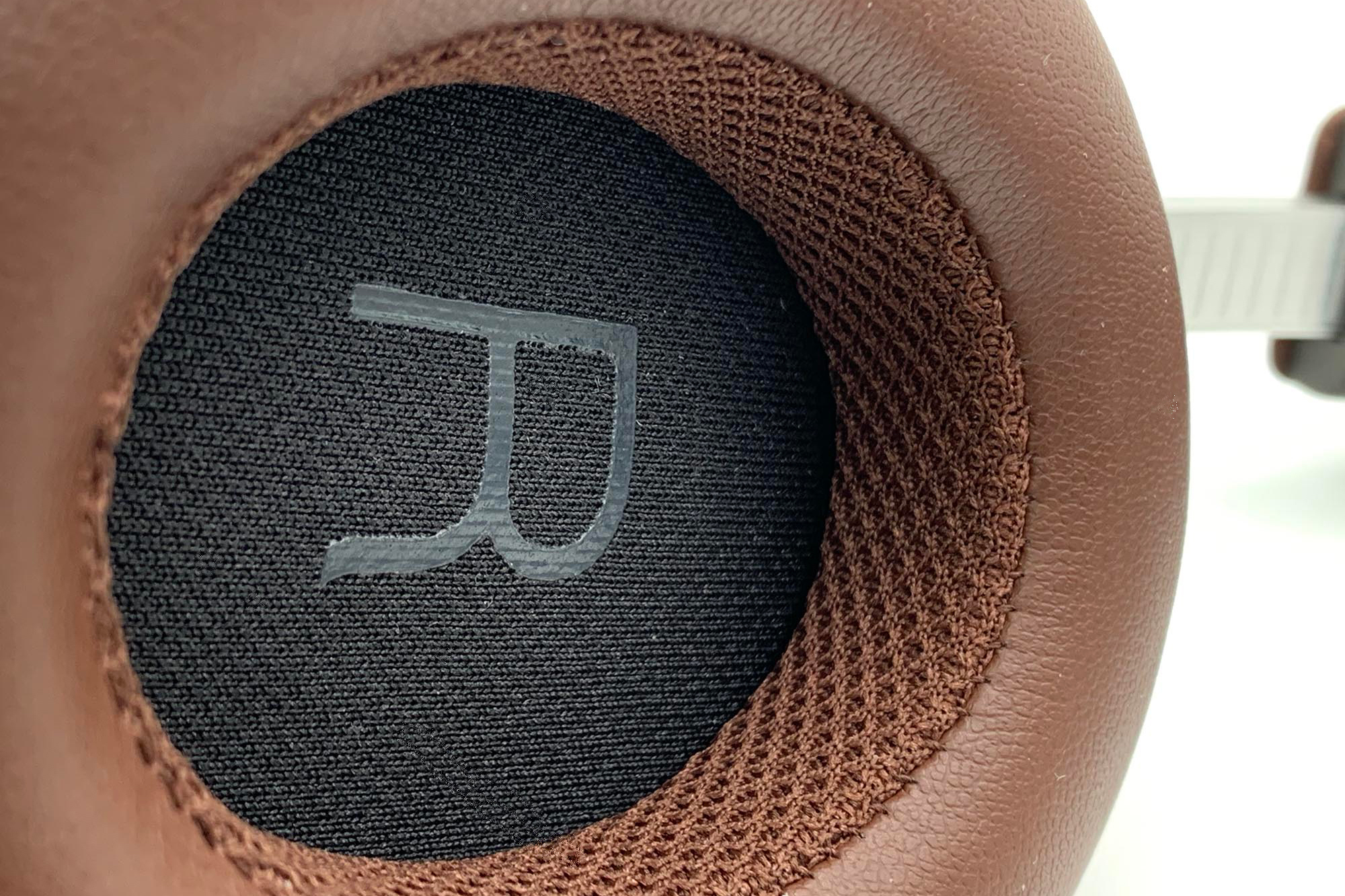 The Aonic 50’s ergonomics are straightforward. Tactile navigation controls and a USB-C charging port are located on the back of the right-hand ear cup. A three-way slider allows you to toggle between Environment Mode (more on that below), ANC off, and ANC on. The toggle switch on my review pair took conscious fiddling to get it to sit right in the middle position (ANC off). Each time I moved the switch, it slid way too easily to an undesired setting, and it really needs a slight design adjustment to make it worry-free. 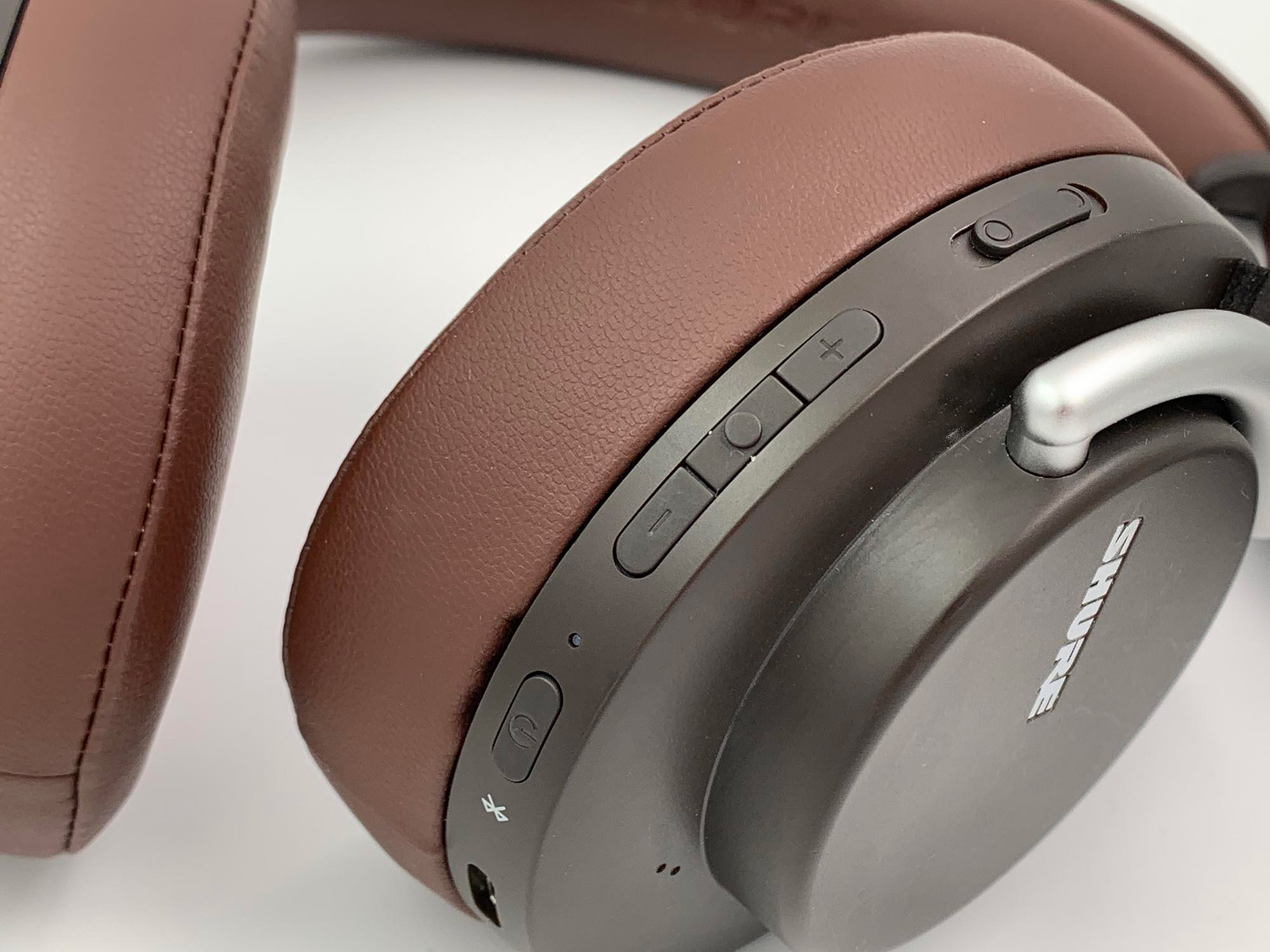 I do applaud Shure for providing a tactile bump on the Play/Pause button. I could instantantly orient my fingers and know whether I was pressing volume-up, play/pause, or volume-down. Pressing the play/pause button twice advances to the next song, while pressing it three times quickly will go to the previous song.

The Aonic 50 are flexible to fit your evolving lifestyle. These cans will operate in three different modes: analog wired (using the included 3.5mm analog cable), wireless, and wired digital via USB-C.

Bluetooth 5.0 is standard, and you’ll get about 30 feet of wireless performance (barring any obstacles). The Aonic 50’s wireless performance is a marvel, bolstered by its impressive codec support, including the full Qualcomm aptX codec suite: aptX, aptX HD, and aptX Low Latency. AptX HD will stream high-resolution audio up to 24-bit resolution and 48kHz sampling rate. AptX Low Latency is perfect for gamers with demanding synchronization between audio and video.

You can also take advantage of Sony’s excellent LDAC codec, which supports high-res audio up to 24-bit resolution and a 96kHz sampling rate, with data rates up to 990Kbps. Last but not least, there’s support for Apple’s AAC and standard Bluetooth SBC. 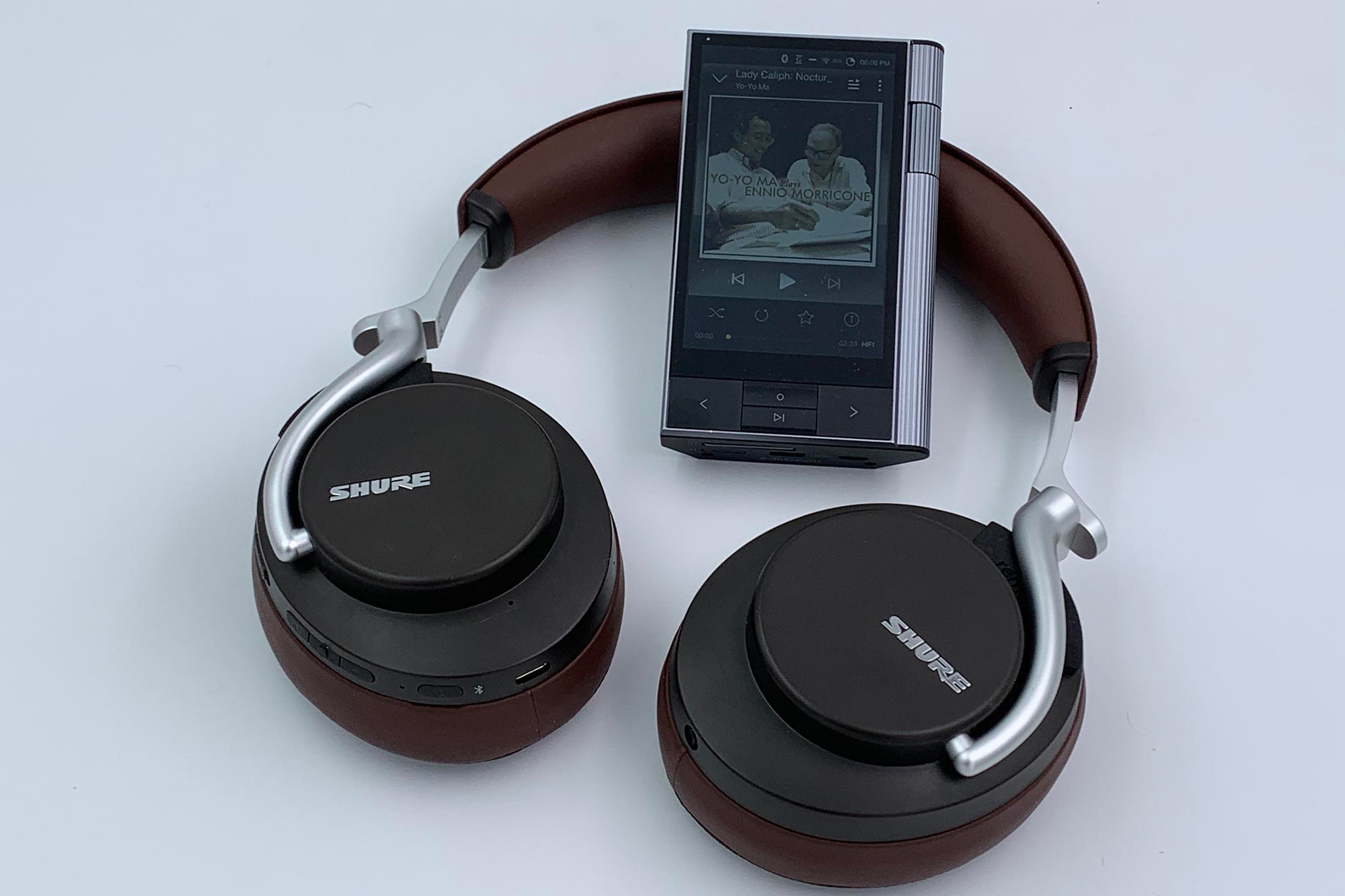 If you find wireless streaming anathema to your audiophile aesthetic, plug a USB-C cable into the Aonic 50 and transport your favorite tunes in the digital domain. I used both the included cable and a six-foot Monoprice Monolith USB-C cable without issue. Best of all? You can listen to the headphones while you’re charging their battery.

Shure doesn’t specify the DAC that’s onboard or the audio resolutions and sampling rates that are supported, but when I connected these cans to my Mac, the computer’s Audio MIDI Setup reported them as supporting audio up to 32-bit resolution with sampling rates up to 384kHz.

Speaking of which, Mac users should take note: If you want to play high-res music through the Aonic 50, know that your Mac will always use a fixed bit depth and sampling rate in the Audio MIDI Setup app (located in Utilities folder). That fixed rate will typically be CD-quality 16-bit 44.1kHz.

When I used the macOS Qobuz app, for example, any high-res file I played defaulted to 16-bit/44kHz, and I had to manually change the output each time in the Audio MIDI Setup app. I therefore suggest using a music app that will automatically switch the output to match the music source, which is something iTunes won’t do. So, iTunes users should consider purchasing a program like Bitperfect that will automatically change your Mac’s bit depth and sampling rate. 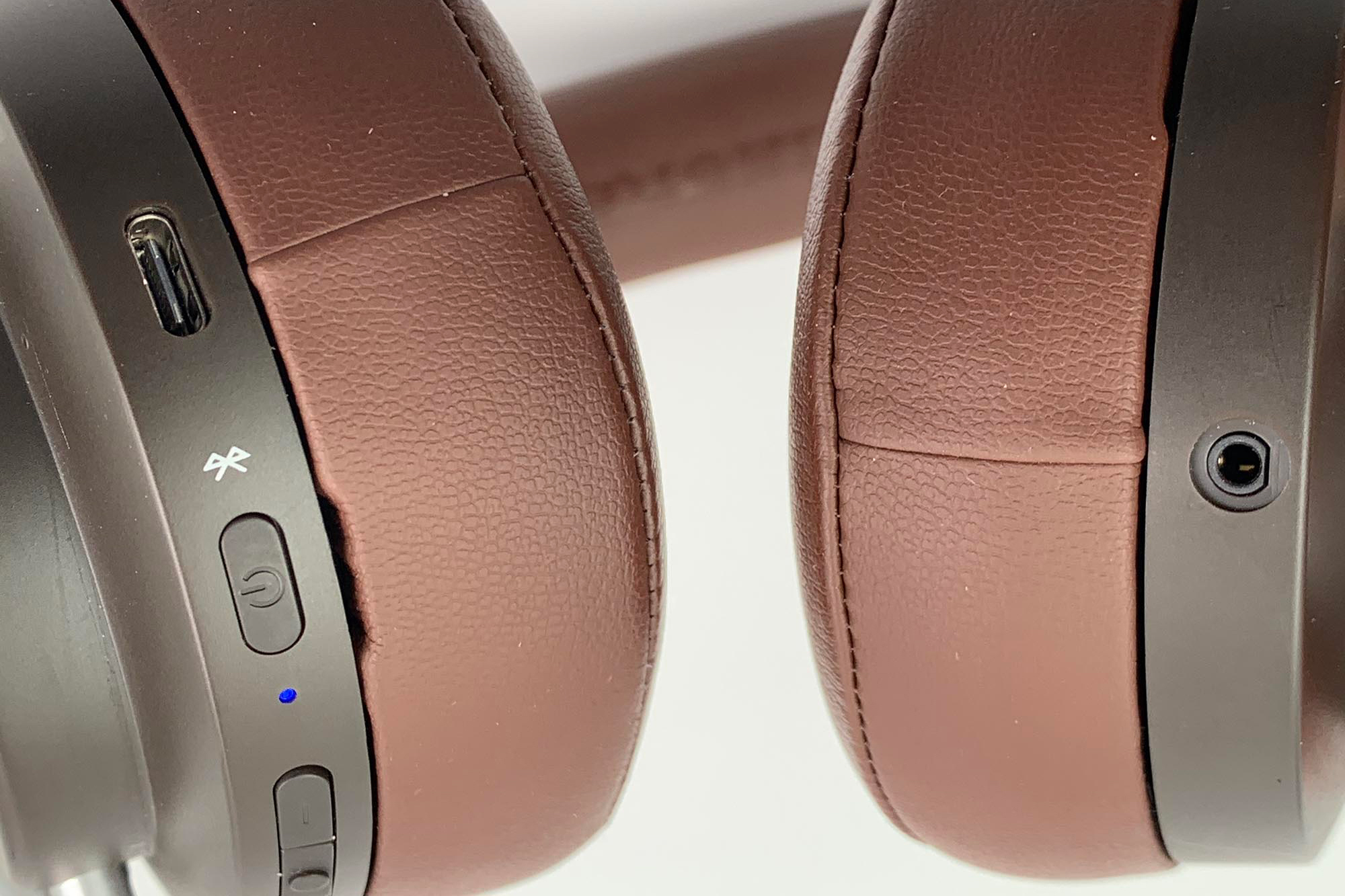 Shure provides iOS and Android users with the ShurePlus Play app, which is basic but practical. The free app shows you the current battery level and lets you set both ANC intensity (normal or max) and Environment Mode intensity (on a 10-point scale). You need to be in each respective mode to change their settings.

The app can also access your music library, which in my case was the iPhone’s Music app. I could not connect to other music service apps, such as Tidal or Qobuz. With the music app connected, I had the option of applying five pre-defined EQ settings or creating my own. Should you decide to create your own EQ preset, you can set the gain and bandwidth for four frequency points: Low shelf, high shelf, and two parametric EQ points. The app does not provide you with the ability to customize the ANC algorithm for airplane, train, subway, or altitude. 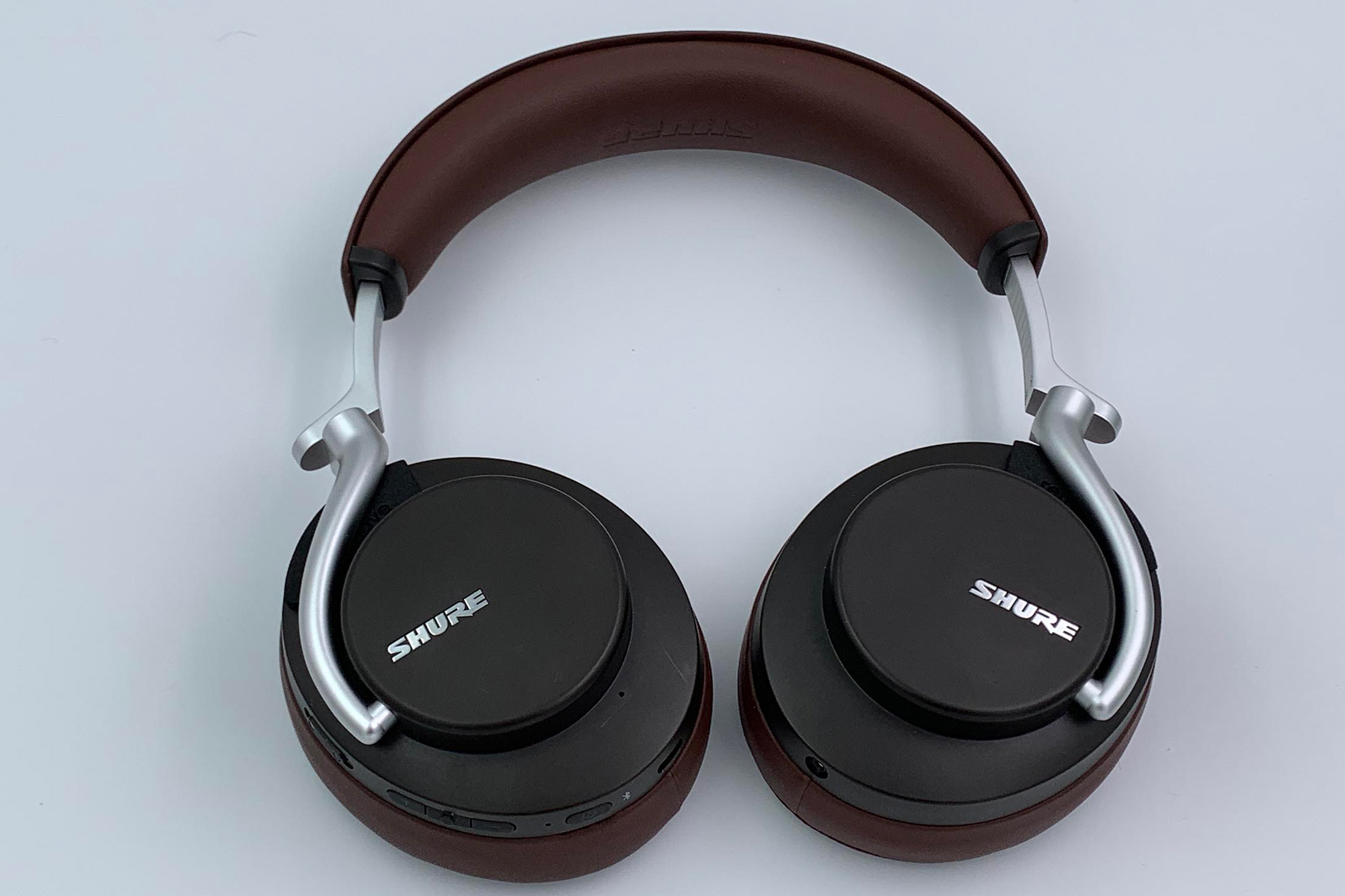 Environment Mode is a winner

The Aonic 50 comes with a suite of tools and tech for the road warrior. Chief among these is a feature called “Environment Mode” that allows you to hear the outside world without taking your headphones off. Shure’s Environment Mode is simply superb and ranks up there with the best I’ve experienced. It’s completely natural in its default setting.

I detected none of the tinny artifacts or other disturbing distortions that plagued competing products that came earlier; in fact, the only anomaly that gives Environment mode away is a heightened brightness to your surroundings. I could even press the play/pause button to summon Siri for hands-free commands. Best of all, you can play music with Environment mode enabled, The music I listened to retained its fidelity and sounded downright fabulous—at least until I used to the ShurePlus Play app to boost Environment Mode to its max setting. Doing that introduced a significant amount of hiss. Bottom line: Shure’s Environment Mode is spectacular.

When it comes to the best active noise-cancelling headphones on the market today, there’s Sony, Bose—and everyone else. The Shure Aonic 50 do nothing to change that picture. I compared them to Bose’s QC35 and Bowers & Wilkins’ PX noise-cancelling headphones by playing recorded cabin noise at 91dB (as measured by a sound pressure level meter C-weighted and set to slow). Typical airplane cabin noise ranges from 90- to 96dB.

I stood two feet under a pair of ceiling speakers and cycled through the three headphones several times. Alas, in each context, I found the Aonic 50’s active noise cancelling to be good but not great. While the Aonic 50 could take the edge off, its ANC performance consistently came in behind the Bose and B&W.

The same performance was true of fan and HVAC noise. I tested the Shure Aonic 50 with the central air at my house and with air purifiers from Hunter and Blueair. When set to high and measured about a foot away, the Hunter registered 84dB and the Blue 77dB on the SPL meter. The Bose once again handily trounced the Aonic 50.

I also noticed distinct hiss when I activated the Aonic 50’s active noise cancellation without playing any music. You won’t notice this in a high-noise environment, but the hiss called attention to itself in quieter locales. 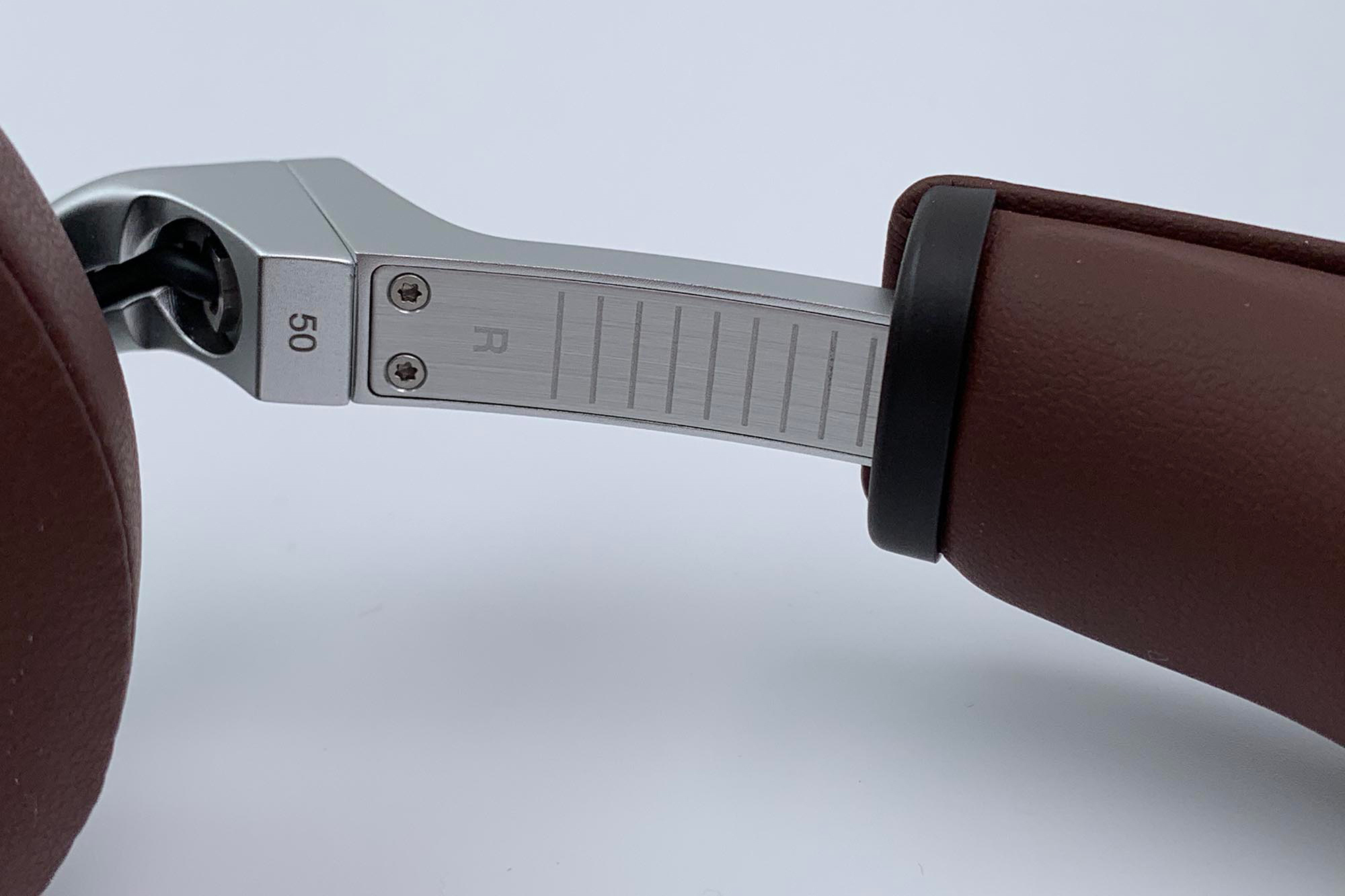 I tested the Shure Aonic 50 primarily with Astell&Kern’s Kann high-res digital audio player as well as with an iPhone XS. Source material included a mix of CD-quality and high-res files, plus streams from Tidal.

Simply put, sonics is where the Shure Aonic 50 shine. At first listen, the Aonic 50 come across as wonderfully well balanced, warm, and intimate. Sarah McLachlan’s “Fallen” sounded oh-so-right. Through the Aonic 50, McLachlan’s vocals on “Surrender and Certainty” sounded rich, detailed, and dimensional. Turning on ANC or Environmental Mode, however, tended to flatten the soundstage.

A well-formed soundstage is a strength I noticed song after song. I was enveloped intimately with instruments abounding on Imagine Dragons’ “Bad Liar.” Case in point was spinning up “Natural.” The opening chorus was precisely recessed in a deep, atmospheric experience, with vocals firmly forward and center stage. 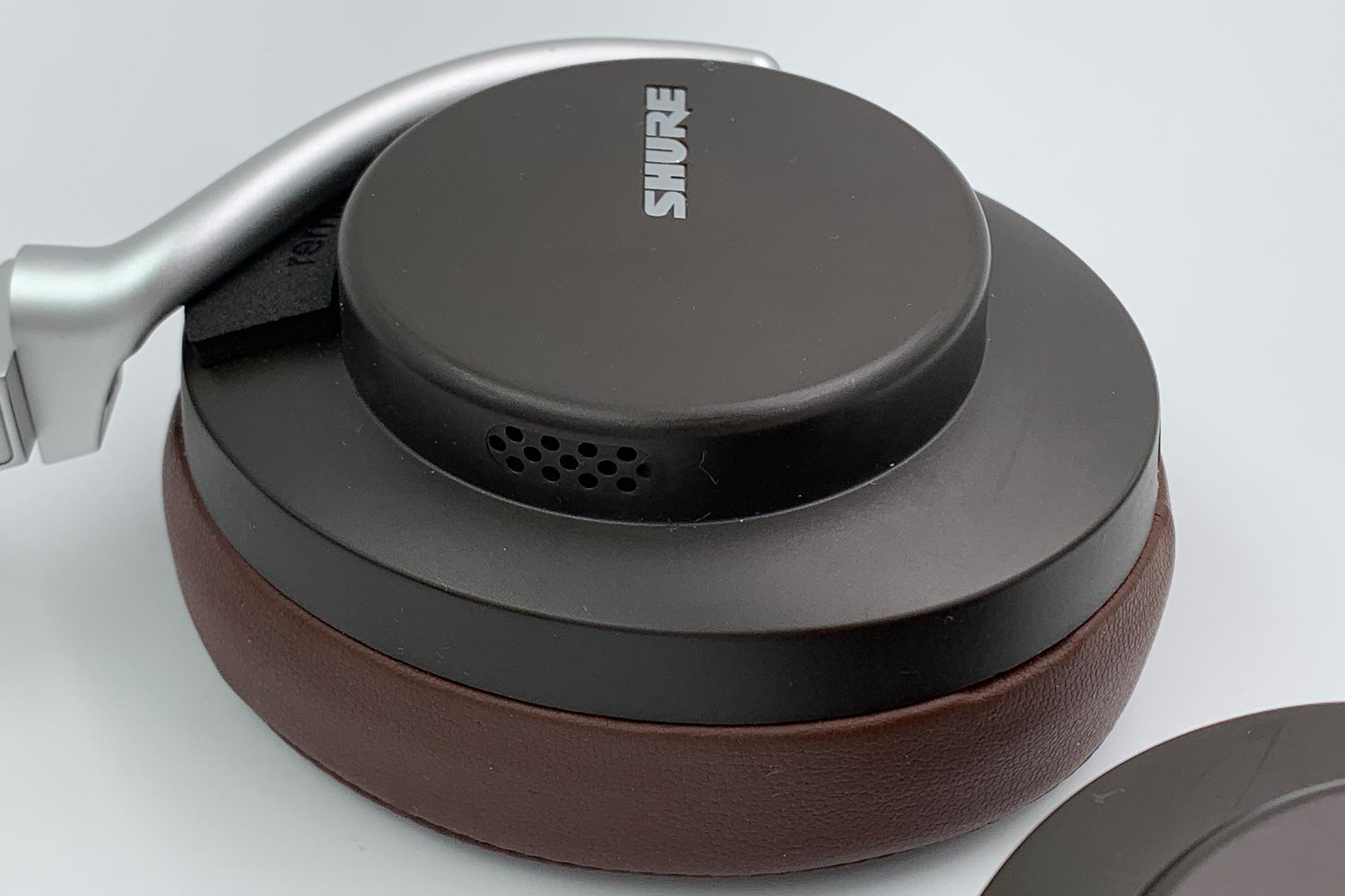 Genre didn’t matter. Rocking to Joe Satriani’s “Surfing with the Alien” or Eddie Van Halen’s immortal “Eruption,” the Aonic 50 mesmerized me. Aaron Copeland’s majestic “Fanfare for the Common Man” as played by the Minnesota Orchestra and conducted by Eiji Oue came across in all its beauty. Bass drums thundered and trumpets were smooth, with brass and cymbals exhibiting a slight roll-off at the top.

But it was Elaine Paige’s defining rendition of “Memory” from Cats, and Yo-Yo Ma’s rendition of Ennio Morricone’s “Dinner” that made the hairs on my arm stand on end.

I encountered a few disappointing quirks during my review period that significantly dampened my enthusiasm for the Aonic 50. The most troubling of these occured when I had the headphones on Bluetooth mode, but with no music playing: The Aonic 50 pumped out annoying digital noise artifacts. This occurred regardless of source: an iPhone XS, Astell&Kern KANN high-res digital audio player, or my Mac. I cannot emphasize enough how bothersome this was—it was nails-on-a-chalkboard irritating. And the artifacts were present whether ANC was engaged or off. As soon as I began playing content, the artifacts would disappear and the noise floor lowered. The engineering team at Shure should address this shortcoming; hopefully, with a firmware update.

Shure’s Aonic 50 headphones are built for high-resolution sonic bliss, whether you’re listening with a cable (analog or digital, via a USB-C cable) or wirelessly (via Bluetooth, with support for every Bluetooth codec that matters).

The fact that active noise cancellation takes a back seat here isn’t a big deal—for me, at least—but the annoying audio artifacts I encountered when using these cans wirelessly without music will be a deal-breaker for many. That issue cost the Shure Aonic a half-star in this review, so here’s hoping Shure can fix the problem with a firmware update. I also found breathability to be an issue during long listening sessions, but your mileage may vary on that score.

Great sound and robust wireless codec support are highlights, but we encountered some audio peccadilloes as well as mediocre active noise cancellation. 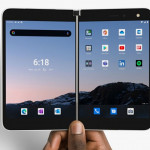 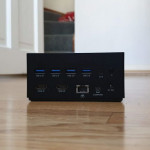 Don't miss a deal at Turbo Tax
Best offers at Microsoft Store
Discounts, Sales and Deals at Sky
Save your money with Brian Tracy
Online-Shopping with TalkTalk Phone and Broadband
Best products at Adobe