The Vava 4K projector proves to be one of the best projectors on the market today, with a bright projection and the beginnings of HDR capability. A messy app store and lack of either Netflix or Hulu is hard to swallow, and 8-bit HDR isn’t as advanced as we’d hope, but make no mistake – the Vava 4K projector is a great choice nonetheless.

The Vava 4K projector has a lot going for it, which is all the more surprising for its humble beginnings, having been crowdfunded during development. It’s now proving to be one of the best projectors on the market today.

As an ultra-short throw laser projector, you’re getting a massive picture (up to 150 inches) while only having to place it a few inches away from a wall or screen. As a 4K HDR projector, too, you’re getting highly detailed images and a rich color spectrum – beautifully powered by a 2,500 lumens peak brightness lens, ensuring pixels pop and shine with color. (You are settling for 8-bit HDR, rather than 10-bit, though.)

The smart platform is somewhat secondary here, with an old iteration of Android TV and a couple of big-name apps (Netflix, Hulu) nowhere to be seen. But with Vava’s mix of bright 4K images, impactful color, and ultra short-throw picture – all packaged in a gorgeously sleek design – it’s a brilliant choice for a new home projector. And it won’t cost you the earth, either.

This Vava UST projector retails at $2,799 in the US, though the Vava website is currently running a $100 discount promotion with the code ‘JULY100’. It does ship to the UK, though you may need to supplement its smart OS with a localized streaming stick, given its US-centric operating system.

It’s a good sight cheaper than our best projector pick, the $6,000 LG HU85LA CineBeam, though a touch more expensive than its runner up, the HU80KSW. You’re probably paying a similar amount, or not too much less, for an equivalently performing television with 60W audio – and all in all you’re getting a level of performance worth the asking price. 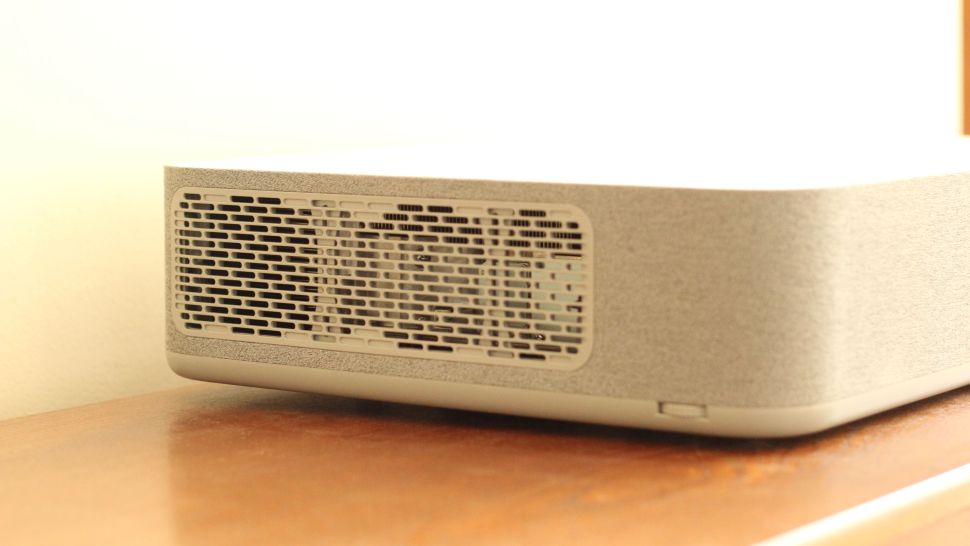 The Vava 4K projector certainly has a winning appearance. With soft edges, an inoffensive white/gray coloring, and a soft fabric mesh covering the front and sides, it’s one projector that should fit in easily with the decor. (Dimensions are 533 x 368 x 107mm, if you need to measure it up with your counter, too.)

Most of the blemishes on the casing – say, for the vents at the projector’s sides – are out of view and kept away from the front of the model. As with most projectors, ports are hidden at the back, facing the wall, which is great for a clean appearance, though any jutting cables or streaming sticks can prevent the projector getting more than around 5 inches from the wall, though you shouldn’t need to get any closer.

Vava tells us a distance of 7.2 inches results in a 100-inch image, with a total range of 80-150 inches, depending how close you place the projector to the wall. It should go without saying that, if you don’t have an 80-inch patch of wall to spare in your home, this projector isn’t right for you.

A motion detection system also ensures that, if you peer over the top of the projector (as we did during testing), the picture will cut out and be replaced by a warning sign, asking you not to look directly into the lens (you know, like you’re not meant to stare right at the sun?). 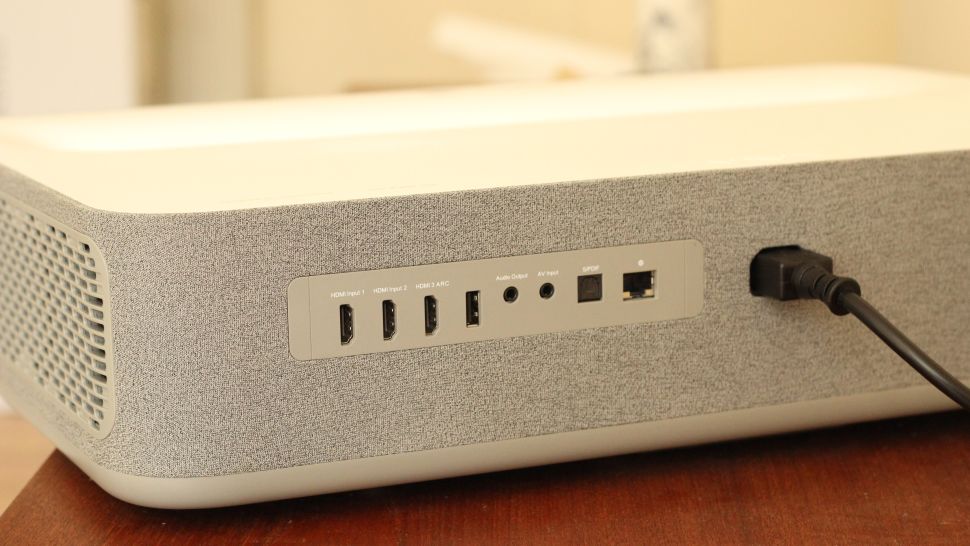 The ports at the rear include three HDMI 2.0 ports, with one support eARC for connecting an external soundbar (if you wish to). There are also audio input and output ports, for connecting to a wider audio setup or using the Vava projector as a speaker from another device source. There’s an Ethernet port, too, for connecting to the internet, S/PDIF, and a single USB port.

The remote is also sleek, with an identical two-tone color scheme and a minimal button layout, including volume, home, back, menu, power, mute, and navigation buttons. The Vava logo is inscribed at the bottom end of the remote, and identical upside down, which is a pleasing touch. It requires two AAA batteries (included, as is a cleaning cloth for the projector lens).

You’ll find a relatively basic Android 7.1 operating system, despite there being an Android 10 OS for smart TVs these days. It’s mostly simple to use, though, with a home menu that lists HDMI inputs (very handy) as well as the App Store, File Manager, and Multi-Screen (for casting). There is a huge amount of app support, including (but not limited to) Disney Plus, Now TV, YouTube TV, JustWatch, Syfy, Amazon Prime Video, AMC, Showtime, BBC News, ESPN, iflix, Deezer, DC Universe, HBO Go, HBO Now, and HBO Max.

The main issue here is that more commonly used apps aren’t listed first, making it difficult to comb through the hundreds of options to find what you’re after. You can organize via name, date added, star rating, or number of downloads, but a little more curation would have been helpful here. Note that you won’t find Netflix or Hulu on here either, though. 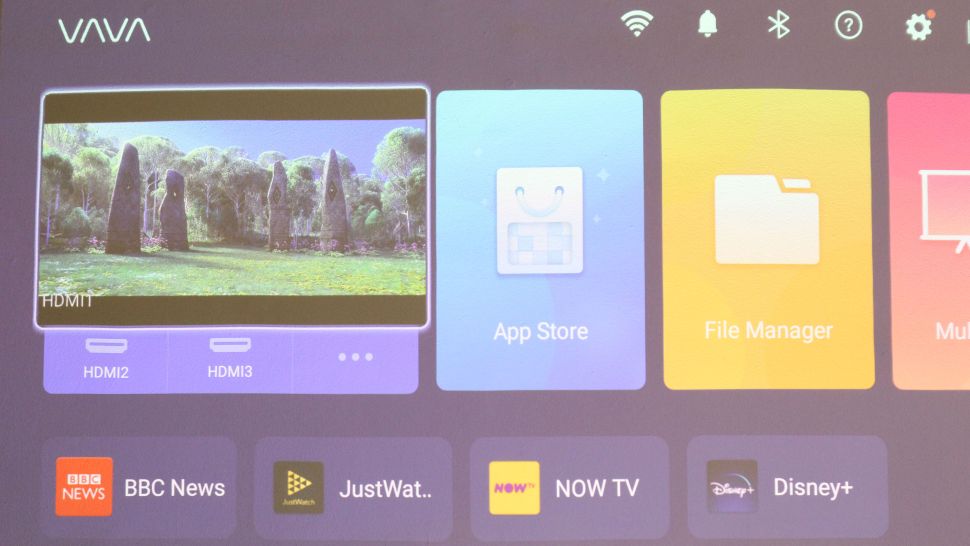 The Vava 4K projector boasts a peak brightness of 2,500 lumens, which is what we’d expect for this price point (the ‘peak’ being the brightest that individual sections of the projection can go).

While some truly high-end models, like the Epson LS100, offer up to 4,000 nits, the Vava projector is certainly capable of bright and vivid images. (The specs for the projector cite 6,000 lumens for the light source, but what’s important is the brightness of the image on the wall or screen itself.)

As ever with a projector of this brightness, it can struggle to show shadow detail when playing in light environments – especially in summer, and in rooms with a lot of outside light leakage. When viewing dark scenes, a dark environment is pretty necessary, but mostly the Vava projector manages admirably to offer an impactful picture.

HD images look rich and detailed, even on the larger end of the Vava projector’s 80-150-inch picture. Upscaling an HD/SDR stream of Black Panther feels seamless, with smooth motion on both opening shots on a basketball court and an aerial assault on a convoy of trucks. Colors are distinct, and clearly benefit from the brightness of the projection, too, especially with the purple and blue skies of the ‘spirit plane’.

To test out 4K/HDR we turned to The Shape of Water on 4K Blu-ray, and found the level of detail still up to scratch, befitting the Ultra HD resolution of the source. For a movie so subsumed in deep, verdant greens, these colors didn’t come across quite as forcefully as those closer to blue, which appear to be more prominent.

You won’t find a proper wide color gamut here – just Rec.709, which means you only get 8-bit color depth, rather than the 10-bit color depth that HDR10 is capable of. The colors are still noticeably improved over SDR, but it’s disappointing to see HDR hardware restricted on this basic metric.

We recommend setting Brightness to High rather than Standard to up the impact of color, though you will make the fans work a bit harder in the process. The Vava projector doesn’t slump in the sound department, either. With an integrated 60W soundbar, courtesy of audio specialists Harman Kardon, you’re getting some decent heft and detail for a projector.

The soundbar consists of only two 30W drivers, so you’re not getting a hugely varied separation of channels, but the sound is still rich and detailed. In the opening scenes of The Incredibles, the lively score rushes to the forefront, and then subtly rumbles underneath the action as the blare of police sirens and revving engines emerge. The smashed glass of a window, the distant tick of an explosive off camera; all these minute details come across clearly. Not with the depth of a proper 5.1 speaker setup, but certainly with adequate impact for a movie night in. An additional subwoofer might be a good investment, though, to get more of lower frequencies across.

You won’t get Dolby Atmos here, but it does support Dolby Audio and dts-HD formats, which are a start.

There’s also Bluetooth connectivity, meaning you can use these 60W speakers to play music from other source devices like a smartphone. Keep in mind that a regular Bluetooth speaker won’t have to compete with the noise of a projector fan, though.

Should I buy the Vava 4K projector? 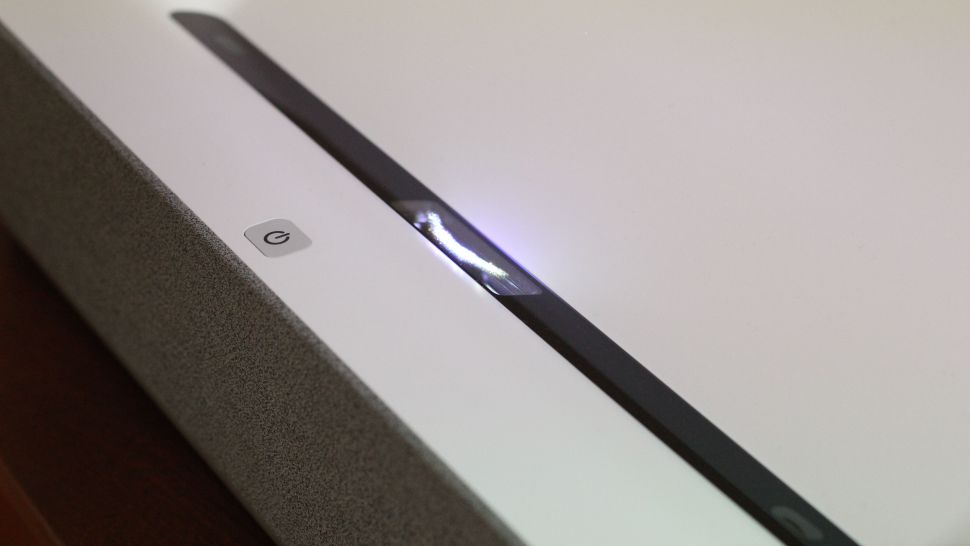 You want a massive projection. With a maximum image size of 150 inches, your films and sports matches can truly go super-size, all while retaining a quality picture.

You want quality audio thrown in. The Vava 4K projector comes with 60W audio from Harman Kardon, ensuring you’re not skimping on sound to get a large picture.

You don’t want a TV taking up space. The Vava projector isn’t overly small, but its demure design means it won’t dominate the living room, and it certainly doesn’t take up as much wall space as a television when not in use.

You have a lot of light leakage. If your living room struggles to keep out light sources, you may struggle to see a huge amount of detail in the picture – even if this Vava 4K projector does better than most on that front.

You’re on a tight budget. The Vava projector’s $2,799 retail price will seem pretty steep to some, and you’ll be able to get a decently specced television for about half the price – even if that means missing out on the projection size, high brightness, and 60W soundbar included here.

You’re a keen gamer. Projectors famously struggle with input lag, and you won’t have a competitive advantage here. (We’re told by Vava that input lag is between 70-120ms.) 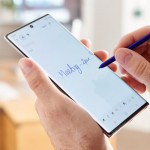 Don't miss a deal at Nike DE
Best offers at Intuit Small Business
Discounts, Sales and Deals at TalkTalk Phone and Broadband
Save your money with Vodafone UK
Online-Shopping with Microsoft Store
Best products at Argos