The usefulness of Alexa, and integration with WikiHow, is enough to justify the low price of the Echo Show 5, even if the lack of some features grates on us. This isn’t quite the definitive smart display, but it is one we can imagine in a lot of people’s homes.

The Amazon Echo Show 5 smart display has arrived, bringing with it a shrunk-down version of the second-generation Echo Show, for those wanting a smaller and cheaper take on the increasingly common smart display.

You’ll find the same Alexa smart assistant as Amazon’s other Echo devices, allowing for hands-free voice commands, and a way to hear information about the day’s news, weather, trivia, or whatever you can think to ask.

But unlike an Amazon Echo speaker, these smart displays carry a touchscreen, for showing information as much as telling it out loud. Users can cycle through their own personal images, watch videos through an internet browser, or just keep up a handy clock face – because, let’s face it, who has a real clock anymore?

The Show 5 looks set to take the place of the circular Echo Spot, Amazon’s smart alarm clock, offering largely the same functionality in a more conventional shape – and at a lower price too. But Amazon is also pitching the Show 5 as a general home companion, something to call up how-to videos and recipes as much as setting alarms.

With plenty of Prime Day deals coming up (July 15-16), you can be sure a lot of Amazon devices will be seeing juicy price cuts in the coming weeks – and we could imagine Amazon pushing a deal with the Show 5, or using the sales to clear stock of the older Echo Spot.

The Show 5 launched in June and is now available to order for delivery worldwide from Amazon. 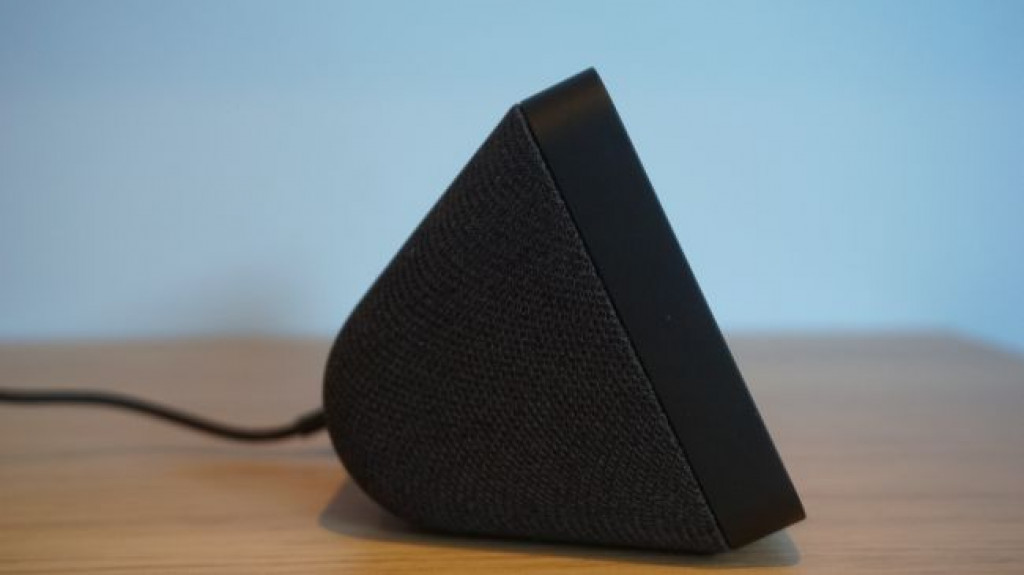 The Echo Show 5 apes the design of the 10-inch Echo Show, except with a more compact 5.5 display, around the size of a smartphone screen – hence the ‘5’ labelling.

Whereas most smart displays are compared to tablets, the shape and size of the Show 5 – and its 960 x 480 resolution – means you’re not getting much visually that you wouldn’t from watching videos on your phone. It might be unfair to compare it to a handheld device, but the design choices here seem to be asking for the comparison.

The Show 5 also features the rounded mesh casing of the previous Show, with physical volume buttons, a mute button for Alexa, and a shutter you can physically slide over the camera lens, for the more privacy minded among you. 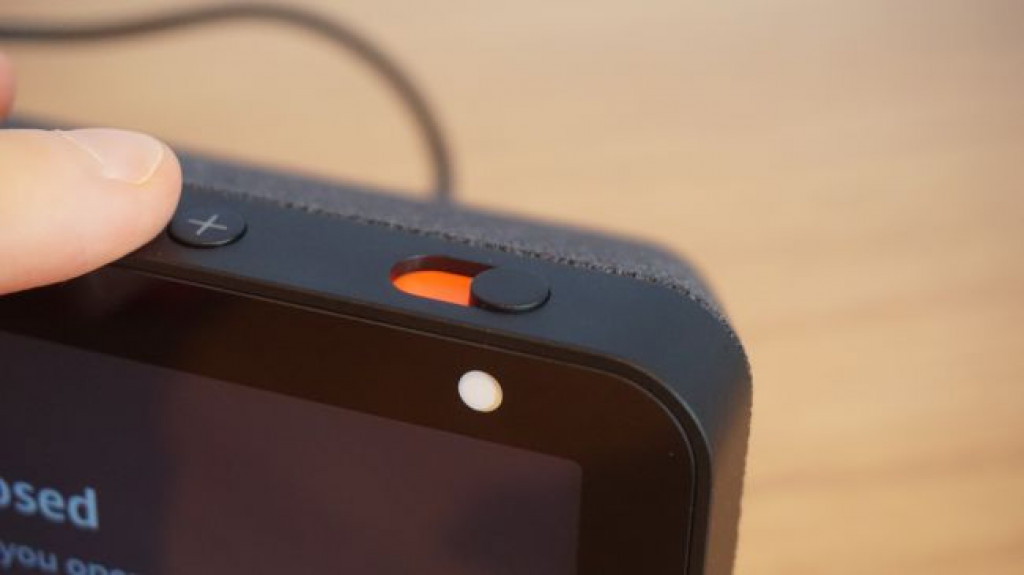 Along the rear is a power port – like the rest of the Echo range, you’ll need to keep the Show 5 plugged in at all times. If you’re keeping it in one place, that won’t be an issue, though if you’re hoping for a smart display you can flexibly use across different rooms in the house, this isn’t it. (Getting two would be something of a solution: hence why Amazon was offering a pair at discount for those who pre-ordered before launch.)

You do also get a micro USB port on the rear, but its intended purpose isn’t immediately clear. While it’d be handy to be able to save a plug socket near your bed and charge, for instance, a phone from the Echo Show 5, it’s unlikely you’re going to have a micro USB to micro USB cable, or micro USB to Lightning cable with which to charge an external device. A full size, powered USB port would be more useful as a result.

A 3.5mm headphone jack, for more private listening, or linking up to more capable Hi-Fi equipment, sits on the back too. 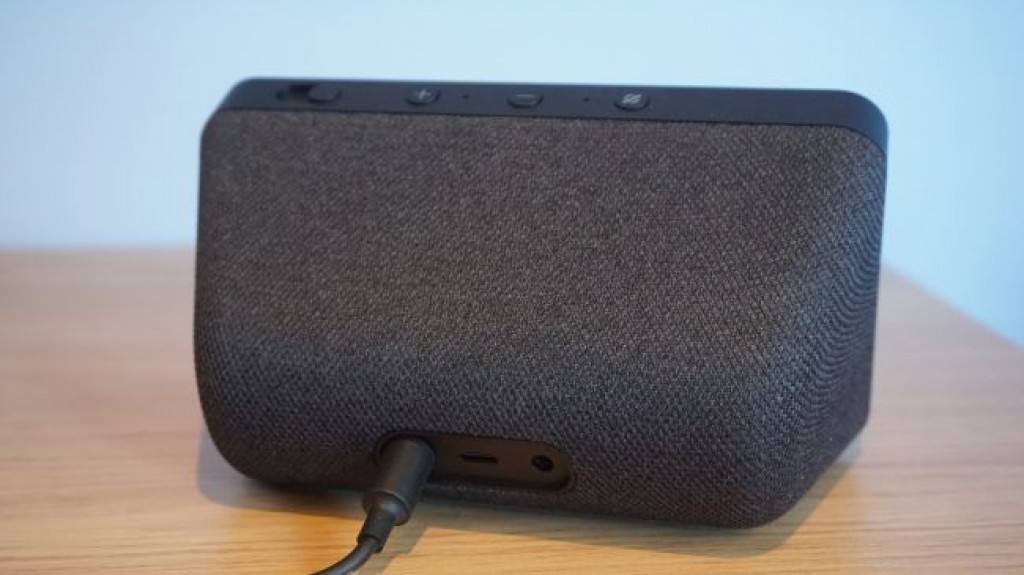 The main difference from the Echo Show is the size of the display. Thanks to Amazon’s simple layout, you’re never really being shown too much information in a small space, though heading into an internet browser can be a bit fiddly.

The interface can also be frustrating to navigate. There’s no physical home button, and you need to pull down a menu from the top side of the screen to find a shortcut back to the home screen. The Alexa voice assistant also can’t jump to particular menus through voice commands, meaning you’re either hands-free or hands-deep, while the things you can do through the screen are quite limited.

The main feature is Alexa’s routines, which enables you to connect to other smart home devices and link them up into singular commands: such as boiling the smart kettle and playing a radio station when you get up in the morning, or dimming the lights when you’re settling in for the night.

You don’t get the Zigbee smart home interface of the larger Echo Show, though Amazon’s efforts at building up compatibility with other smart home brands means you’re unlikely to find yourself unable to connect different products. You’ll certainly be fine with multi-room setups with other Echo devices, and there are Alexa skills for the likes of Philips Hue light bulbs or Arlo security cameras. 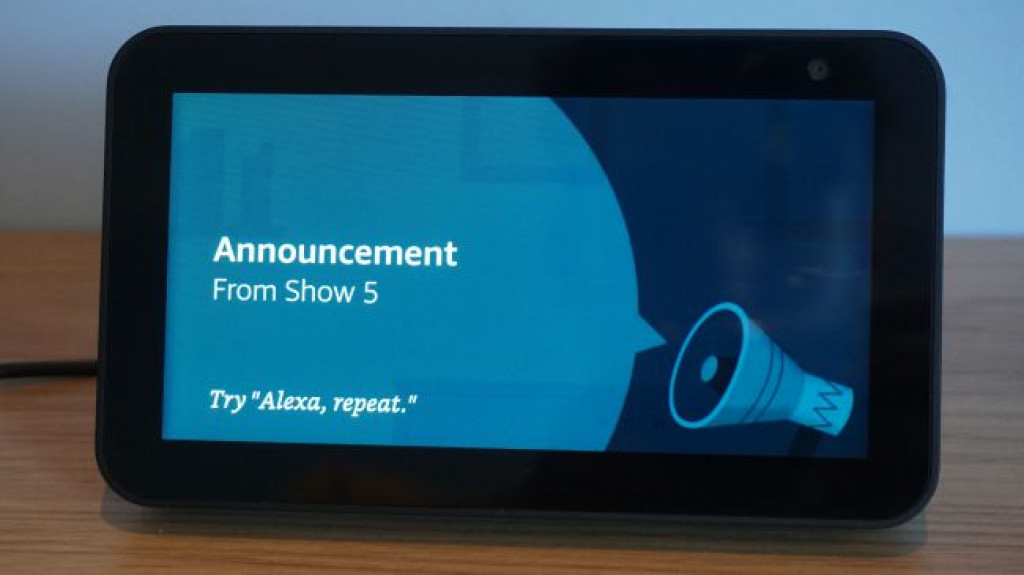 But we lost count of the number of times the Show 5 asked us to head into the Alexa app to ‘drop in’ to other speakers, select music and playlists by hand, or alter levels of bass when listening to music. Having to use your smartphone and the Show 5 in tandem can feel like one screen too many, and we’re not sure how necessary Amazon’s smart displays are until it gets some more integrated app functionality.

While the Show 5 is hooked up to Vimeo for music videos, you can’t summon videos directly from YouTube, and the low-resolution screen isn’t particularly tempting for watching Netflix shows and the like – which you can watch through an internet browser, either Amazon Silk or Mozilla Firefox.

The only app for streaming TV shows and films is Amazon Prime Video, unsurprisingly – and you’ll get the most out of this display if you have a Prime subscription (which also bundles in Amazon Music).

Overall, its size, form factor, and limited video capabilities make the Show 5 generally better suited as a bedside alarm clock than a kitchen companion, or as a replacement tablet. But it being tethered to one area means you’re probably going to be using it as one or the other: having to watch it go dark and then reboot every time we wanted to bring a recipe into another room was a hassle, and made us wonder why we weren’t just looking up information on our phone – which is essentially the same size, with higher resolution, and the ability to jump between apps more easily. 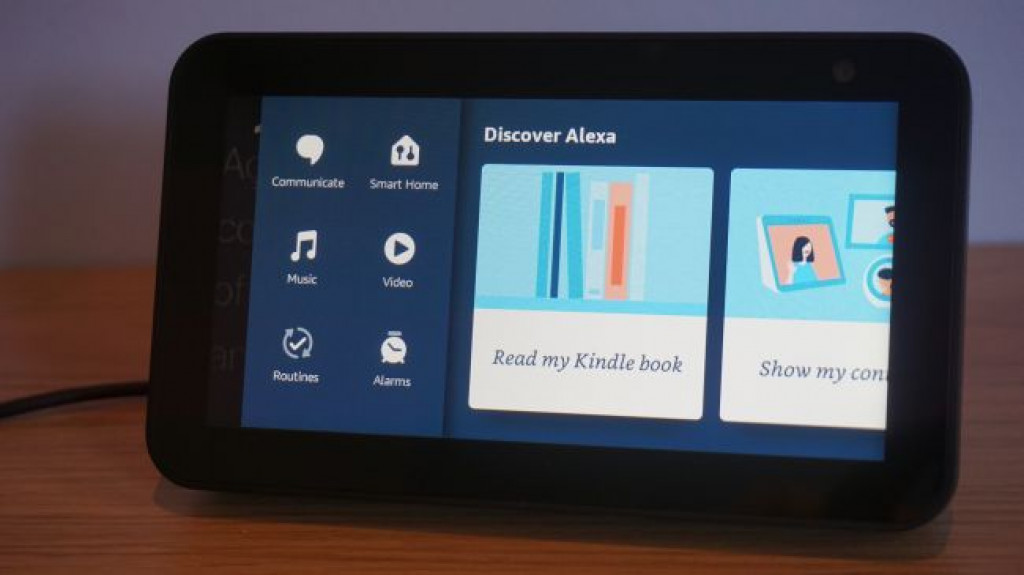 You probably won’t be coming too much to the Echo Show 5 for your music needs. While the hands-free voice control for summoning songs, playlists, and radio stations is as handy as on any Alexa device, the output itself leaves a lot to be desired.

Like the larger Echo Show, the Show 5 uses rear-facing speakers behind the display, though with a somewhat smaller output: only 1.65 x 4W instead of the larger model’s 2 x 10W wattage. It doesn’t go very loud, and the volume it does achieve is hindered by a muddy bass presentation. Listening to Cough Cough (by Everything Everything) turns the track’s varied percussion into a solid slab of identical beats, as if replacing a whole drum kit with a single bass drum.

You can alter the levels of bass, mids, and trebles in the Alexa app, but they feel like slightly blunt tools, and you tend to end up removing layers of the track rather than improving the quality.

The mid and high frequencies are generally clear though, making the Show 5 perfectly capable for playing podcasts, listening to radio stations, or chatting with Alexa herself. 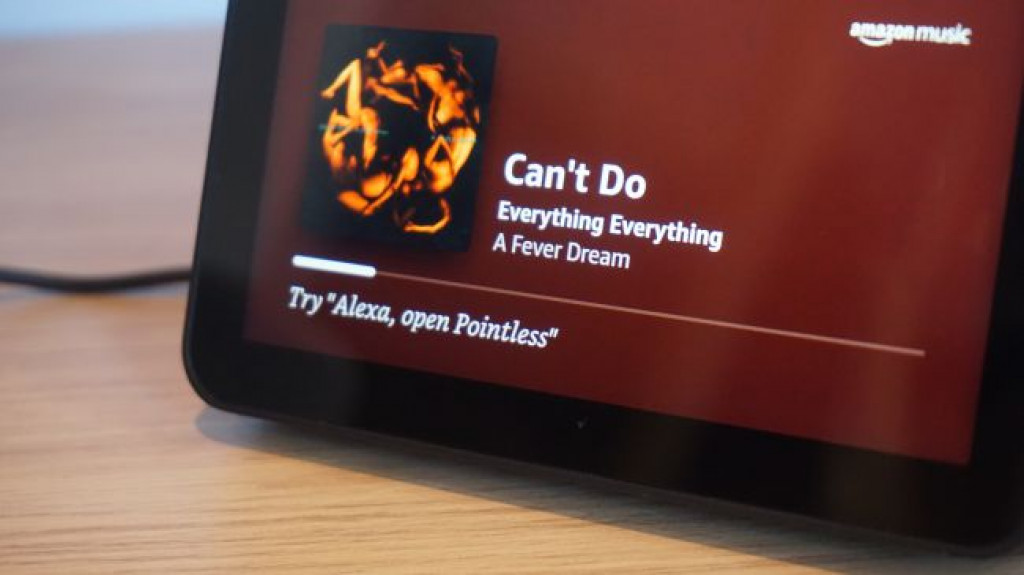 Other smart displays to consider

It’s impossible not to compare the Show 5 to the competition: largely because most of the competition is the rest of the Amazon range. If the 5.5-inch screen won’t cut it for you, there’s the 10-inch Amazon Echo Show, which got a hardware refresh last year. Or, if you want a quirkier alarm clock and don’t mind the circular screen, the Echo Spot is your best bet. Screen sizes aside, their functionality is all but identical. And if you’re happy to drop the screen entirely, all the voice and audio functions will work through an Amazon Echo, Echo Dot or Echo Plus, too.

The Lenovo Smart Clock came out shortly before the Show 5, and we awarded it four stars for its strong sound and smart capability. Unlike the Show 5, it has a basic YouTube app (even if it only shows video recommendations via your Google account), and utilizes the Google Assistant AI instead of Alexa. It’s also slightly smaller at only four inches across, and doesn’t feature a camera for video calls or have an internet browser.

But which of the two you’ll want to go for will depend on whether you have Alexa or Google Assistant devices already, whether you plan on doing video calls on something other than your smartphone, and whether you really want to scrawl the net yourself on a device not really suited for it. 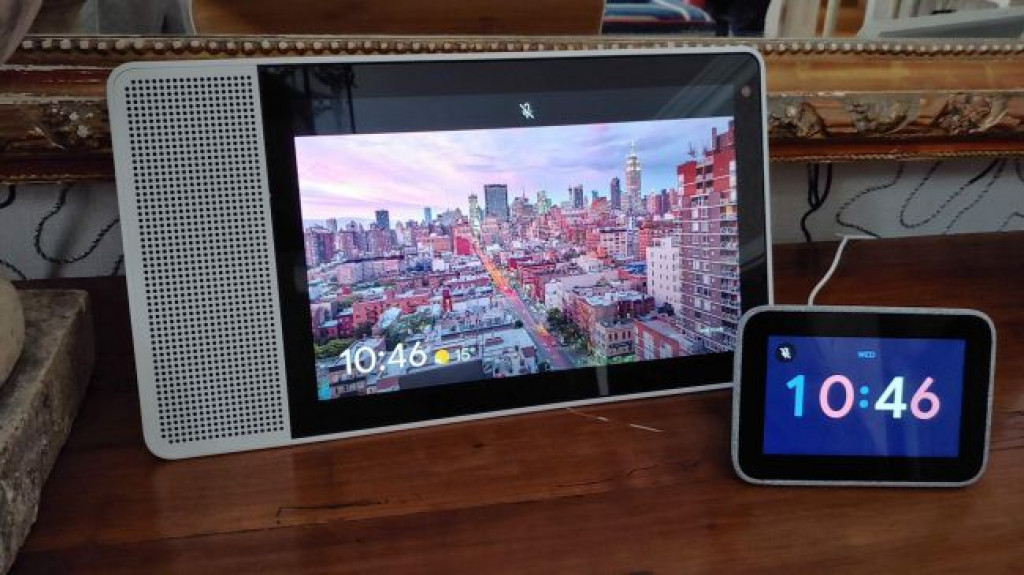 So what did we make of the Echo Show 5?

As a compact and affordable smart display, Amazon absolutely delivers. The Show 5 vastly undercuts its other screen-based siblings in price, and bundles in the full Alexa experience along with the beginnings of smart routines and a digital alarm clock.

Inevitably there are corners cut in the process. The Show 5 retains the bass-heavy presentation of the Echo Show’s speakers – at a lower volume – and doesn’t offer the app integration it needs to really feel like a necessary presence in the home.

But the fact remains that the Echo Show 5 is still one of the cheapest ways to get an Alexa device into your home – and bundled in with an alarm clock, basic smart home functionality, and the beginnings of some video apps, you’re getting a pretty big package for the price. This isn’t quite the definitive smart display, but it is one we can imagine in a lot of people’s homes. 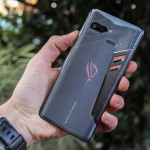 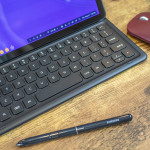 Don't miss a deal at Argos
Best offers at TalkTalk Phone and Broadband
Discounts, Sales and Deals at Nike DE
Save your money with Vodafone UK
Online-Shopping with Myprotein
Best products at Sky